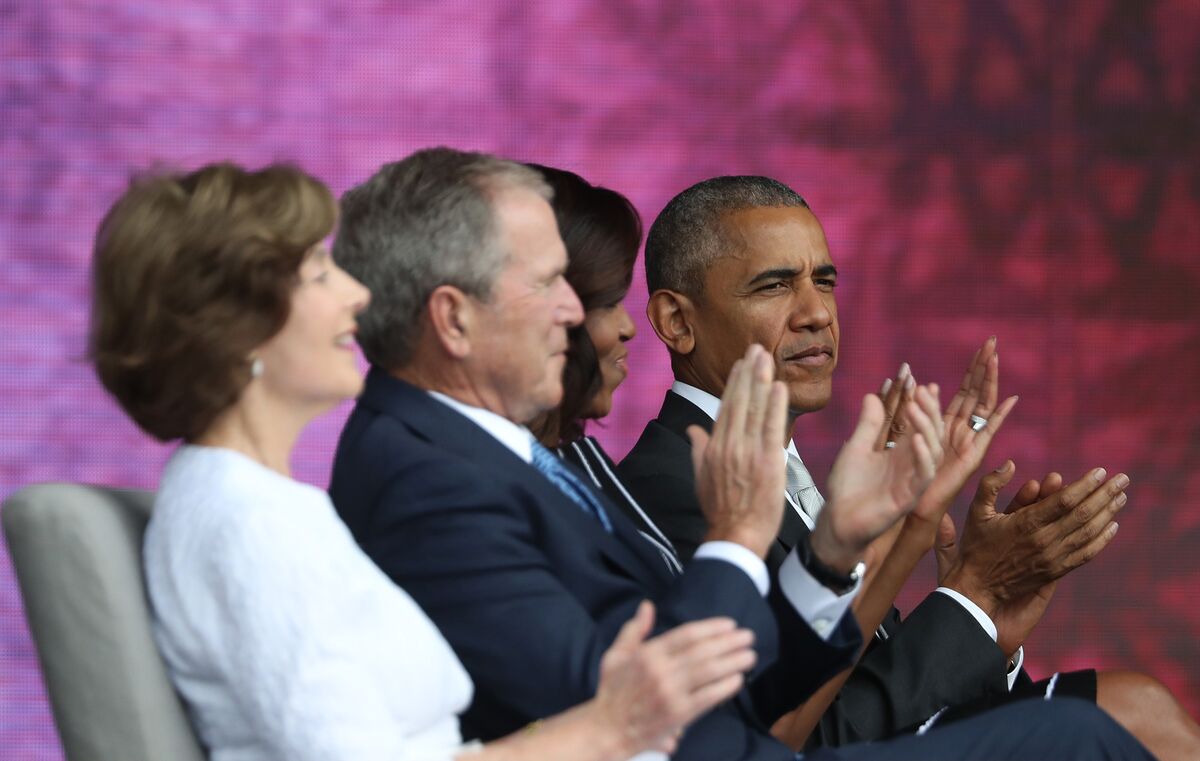 Four of the five living former U.S. presidents appeared in a public service announcement released Thursday to encourage Americans to get the coronavirus vaccine, but the most recent First Couple does not appear.

The latest in global politicsGet insight from reporters around the world in the Balance of Power newsletter.

Notably absent from the video showing the Obamas, the Bushes, the Clintons and the Carters receiving their coronavirus vaccination, were the most recent inhabitants of the White House, Donald and Melania Trump.

Michelle and I got vaccinated against COVID-19 because we know its the best way to beat this pandemic, protect one another, and get the country back up and running again. So I hope youll get the vaccine as soon as its available to you. It could save your life. pic.twitter.com/OJLwZbv0iz

Right now the Covid-19 vaccines are available to millions of Americans, and soon they will be available to everyone, George W. Bush said in the video. Barack Obama followed with: This vaccine means hope, it will protect you and those you love from this dangerous and deadly virus.

Ad Council spokeswoman Ellyn Fisher said the council, which produced the video, began the project in December, when Trump was still president. Portions of another ad featuring Obama, Bush and Clinton were shot at President Joe Bidens inauguration, which Trump did not attend.

We just learned last week that President Trump did get vaccinated and were so pleased he advised Americans to go get your shot, she said in a statement.

Trump spokesman Jason Miller did not immediately respond to a request for comment. Trump also did not get his coronavirus vaccine publicly, like the former presidents, former Vice President Mike Pence, Vice President Kamala Harris and Biden have. Apple discontinues the HomePod, goes all in on the...

It seems as though the HomePod Mini is good enough for most of us, so Apple is calling time on the original.
Read more

If you're heading to the grocery store or buying some new appliances, you may notice a bigger hit to your wallet. According to the U.S. Labor Department, consumer prices last month rose at the fastest rate since August 2008. CBS MoneyWatch associate managing …
Read more

Prince Harry discusses his struggle with mental health after...

Prince Harry opened up about the mental health struggles brought on by the death of his mother, Princess Diana, in a new series with Oprah. Nikki Battiste has the details.
Read more

Watch out Microsoft, here’s a Surface Studio rival from...

Exclusive: We spill the beans on the Wuying AIO PC from Alibaba.
Read more

Rick Leventhal, a senior correspondent for Fox News, is leaving the cable channel, the organization confirmed Thursday.The move comes after Leventhal relocated to Los Angeles to be with his wife, Kelly Dodd, a cast...
Read more

Liberty University has filed a lawsuit against its former president, Jerry Falwell, Jr., for $10 million, according to several reports.The suit alleges...
Read more

European Union leaders will discuss later in October the idea of setting up an EU strategic gas reserve and the decoupling of electricity prices from gas prices, the head of the European Commission Ursula von der Leyen said on Tuesday.
Read more

New Zealand's 206 new daily community infections on Saturday carried it past the double-hundred mark for the first time during the coronavirus pandemic, as the nation scrambles to vaccinate its population of 5 million.
Read more

The much-delayed Pentax K-3 Mark III is expected to finally go on sale next week, according to the latest rumors.
Read more

Melbourne set a 70% first-dose vaccination rate target to begin easing some of the world’s toughest Covid-related restrictions, as authorities struggle to contain an outbreak of the delta variant.
Read more

The Supreme Court on Thursday temporarily blocked part of an eviction moratorium put in place by New York amid the coronavirus pandemic.The order was unsigned but appeared to break along familia...
Read more

“They certainly took time away from what we had been planning to do that day,” said Defense Department press secretary John Kirby.
Read more

YouTube has suspended Sen. Rand Paul, R-Ky., from posting for one week over a video he made falsely claiming that most masks are ineffective in combatting COVID-19.
Read more

A commission finds evidence of 2,900-3,200 abusers within the country's Catholic Church since 1950.
Read more

Technology exists that could have prevented Amtrak crash

The rest of the world is far from ‘normal’

Singaporean authorities found 13 new coronavirus cases locally, as the government widened mandatory testing in a large neighborhood outside the city center where a cluster has been expanding since mid-June.
Read more

The airline responds to reports some staff may have been involved in organised crime.
Read more

Will Cain: This is the crisis where Biden will...

"Fox & Friends Weekend" co-host Will Cain argued on “The Faulkner Focus” Thursday that the Biden administration and Americans are going to pay the price “politically” for the supply chain crisis.
Read more

The Memo: How the COVID year upended politics

One year ago Thursday, then-President Trump was in with a fighting chance of reelection, Sen. Bernie Sanders (I-Vt.) still clung to some hope of becoming the Democratic presidential nominee, and the nation's unemplo...
Read more

Adam Sandler has an estimated net worth of more than $420 million as of 2020, but critics have been less than impressed with his films.
Read more

Delta Airlines' chief health officer announced last week that 4,000 unvaccinated employees got inoculated after the company announced that it was adding a $200 monthly surcharge on its health care plan for employees...
Read more

Plans to pump money into rebuilding the nation’s roads, bridges and other infrastructure could give companies that make machinery and materials a solid foundation for growth
Read more

Hello. Today we look at whether the 1960s are being repeated in the U.S. economy, how rural India is suffering and the forecasting history of central banks.
Read more

President Joe Biden and Prince Harry were among several big names advocating for vaccine equity at “Vax Live: The Concert to Reunite the World.”
Read more

“We’ve got to get to the bottom of this shit,” the normally amiable Sen. Jon Tester (D-Mont.) said. “Jesus."
Read more

An award-winning Dutch crime reporter has been hospitalized after being shot on the streets of Amsterdam, ...
Read more

The firm says the change will make its brand more "dynamic", but some social media users do not agree.
Read more

The Houston Astros look to claim their third World Series in the last 5 years starting Tuesday, when they host the Atlanta Braves in Game 1 at Minute Maid Park. Jim Bowden, MLB insider and game analyst for CBS Sports HQ, joins CBSN with a preview of the 2021 …
Read more

The colors and brash logos might seem playful, but the watchmaking is anything but.
Read more

“You have a bigger effect on people’s lives than you think you do,” Syd Sanders said, after reflecting on what his history-making accomplishment has meant to him.
Read more

The Senate swiftly passed the $2.1B emergency security supplemental bill Thursday in in a rare unanimous vote.
Read more

Forests have long been celebrated as the natural heroes in the fight against the climate crisis. But another answer to locking carbon dioxide safely away lies right beneath our feet.
Read more

Biden to sign executive order on anti-competitive practices in...

President Biden will sign a sweeping executive order on Friday, aimed at promoting competition in the economy through 72 initiatives cracking down on anti-competitive practices in multiple industries.The order aims to bolster competition and make...
Read more

Family reflects on devastation of COVID-19

One year ago, a family in Freehold, New Jersey, lost a loved one to COVID-19. It was just the beginning of their heartache. A total of five members of the Fusco family died in the early weeks of the pandemic. Nikki Battiste reports.
Read more

‘Big Storage’ Is the Next Big Technology in the...

The ability to bank lots of power for when it’s needed most holds the key to making decarbonization cheaper.
Read more

A quilt featuring a prominent "Q" for QAnon also sold for thousands of dollars.
Read more

Migrant boy, 5, seen screaming after being abandoned along...

A heartbreaking video has emerged purportedly showing a 5-year-old boy screaming “don’t go!” after being abandoned along the U.S.-Mexico border.
Read more

Covid in Wales: More than half of population fully...

Wales becomes the first UK nation to give second jabs to 50% of its population.
Read more

Myanmar military leader says elections will be in 2...

Six months after seizing power from the elected government, Myanmar’s military leader has repeated his pledge to hold fresh elections in two years and cooperate with Southeast Asian nations on finding a political solution for his country
Read more

The Biden administration is requiring all companies with more than 100 employees to be fully vaccinated or be subject to weekly COVID-19 testing. The mandate comes as millions of children aged 5 to 11 are lining up to get their low dose vaccine. Assistant eme…
Read more

10 killed in ‘heinous’ attack on mine-clearing charity in...

Gunmen killed 10 people and injured 16 in an attack on the HALO Trust organization in Afghanistan, the humanitarian group said Wednesday.
Read more

He was charged after a 60-year-old man was left with serious injuries after an incident in Glasgow.
Read more

Wall Street bore the brunt of lawmakers’ assault on overdraft fees last week, but it’s regional banks that rely most on that revenue, according to a note Tuesday from Morgan Stanley.
Read more

But he said the administration would remain flexible based on the data as it comes in.
Read more

Brazil has topped 600,000 virus deaths as it bids to return to pre-pandemic normalcy
Read more

‘There is stuff’: Enduring mysteries trail US report on...

UFOs are making a splash in Washington
Read more

Tokyo asks government to allow it to take virus...

Tokyo has asked Japan’s central government for permission to implement emergency measures to curb a surge in a rapidly spreading and more contagious coronavirus variant, just over three months before the start of the Olympics
Read more

From 2011 3D TVs reigned supreme, but when 4K was introduced, they disappeared. We explore why they couldn’t co-exist.
Read more

CNN anchor Don Lemon announced Friday night that his show, "CNN Tonight with Don Lemon," is over, though the host indicated that he is not leaving the network."So earlier I told you I had an announcement and I do....
Read more

Supercars aren't a sure ride when it comes to investing. @KyleStock explains what makes a car an appreciating asset https://trib.al/RfBCEln (Source: Quicktake)
Read more

For Europeans watching the disaster unfold in Afghanistan, it’s yet another painful reminder of their shrinking place in the world.
Read more

The streaming giant will own and control works like Charlie and the Chocolate Factory and The BFG.
Read more

Americans can expect relief payments as soon as this weekend