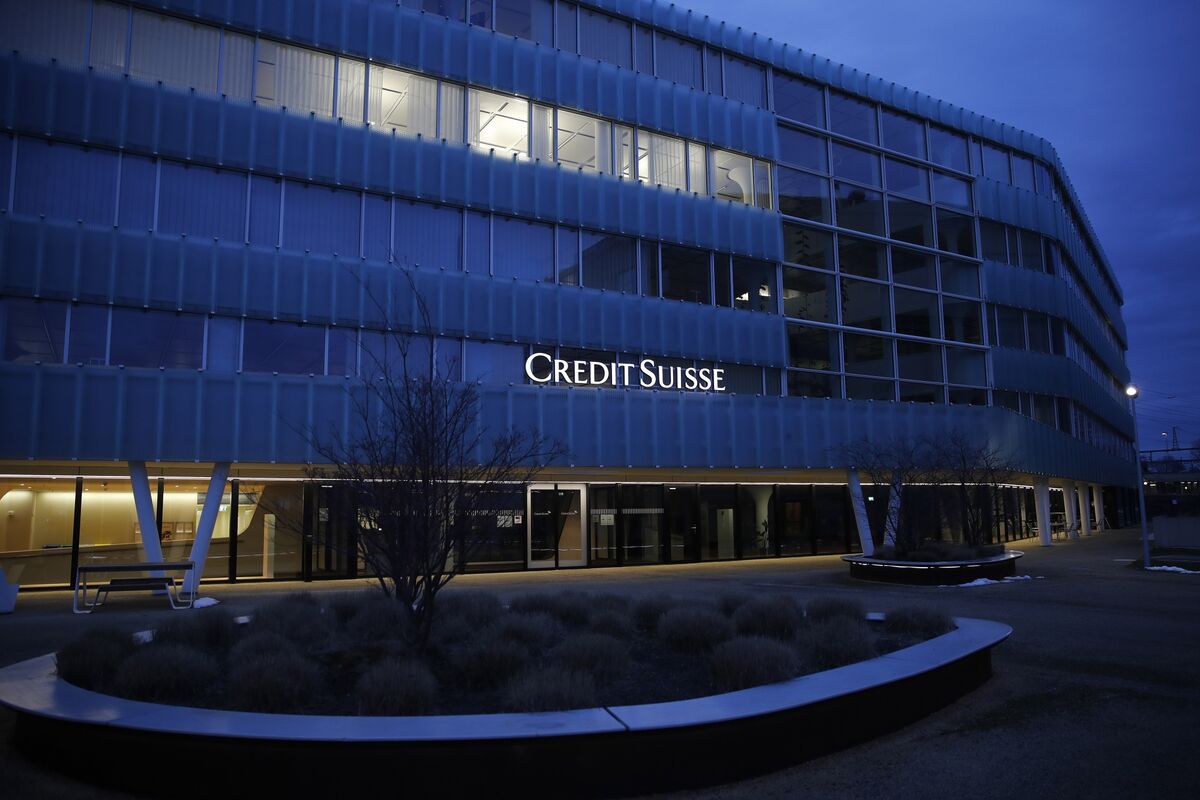 Greensill Capital that the bank extended a few months before the trade finance firm collapsed.

Risk managers at Credit Suisses investment bank in London were initially reluctant to grant the request, according to a person familiar with the matter. They then discussed the matter with their counterparts in the Swiss and Asian private banking units, and the banks risk chief Lara Warner signed off on the loan in October, the person said, asking not to be identified in discussing internal information.

Credit Suisse declined to comment. The Financial Times reported earlier that London-based risk managers were overruled on the loan, which the newspaper put at $160 million, and that Warner had signed off on the transaction.

Credit Suisses risk-taking has come under scrutiny after a number of missteps in the past year, some of them linked to high-profile clients. The bank pursues a strategy of deepening relationship with its richest customers, typically entrepreneurs whose companies do business with the investment banking unit while the wealth management divisions oversee their personal finances.

Early last year, Credit Suisse was among lenders exposed to Luckin Coffee Inc., the onetime challenger to Starbucks. The bank had praised founder Lu Zhengyao as the poster child for its strategy, arranged the companys initial public offering and lent Lu millions of dollars, but was left staring at losses when the stock imploded in an accounting fraud.

The bank froze the Greensill-linked funds last week and is now liquidating them, amid concerns about the valuations of some of the assets and after a major insurer of the holding declined to extend fresh coverage. Executives at the bank knew early on that a large portion of the assets in the funds were tied to Sanjeev Gupta, a Greensill client whose borrowings were at the center of a 2018 scandal at rival asset manager

As of April 2018, about a third of the assets in the strategys flagship were linked to Guptas

GFG Alliance companies or his customers as of April 2018, according to a filing. The exposure is across the funds now at least $1 billion to $2 billion, the FT reported, citing unidentified people with knowledge of the matter.

The bank has temporarily replaced three managers linked to the funds. It has started an internal probe into the collapse of the funds and has sought external help to deal with queries from regulators. Chancellor Angela Merkel says Germans must keep working for democracy, as the country celebrated the 31st anniversary of the reunification of East and West
Read more

Brazil legend Pele is released from hospital after undergoing surgery for a colon tumour.
Read more

U.S. private employers in April added the most jobs in seven months, led by gains in industries hit hardest by the pandemic and signaling hiring will continue improve as the economy reopens and more Americans are vaccinated.
Read more

Clubhouse for Android: when is it coming to Android...

Clubhouse for Android: when is it coming to Android phones?  TechRadar
Read more

Landlords may evict roughly 750,000 U.S. households by the end of the year, as lapsing eviction bans and high demand for rental housing push property owners to remove tenants, according to analysts at Goldman Sachs Group Inc.
Read more

IPVanish is a fast VPN that is highly configurable and offers clients for Windows, Android and iOS.
Read more

The fourth Thor movie has expanded its cast with a new hire, but what role will they play in proceedings?
Read more

Montana Gov. Greg Gianforte (R) will be donating the first quarter of his salary to a drug treatment facility in the state. One Health Bighorn, a medical facility that also does drug treatment, i...
Read more

Wedding cake toppers for every couple

Miami Beach residents have had enough with spring break partiers taking over their town.
Read more

Sniffer dogs trained using smelly socks worn by people infected with the SARS-CoV-2 virus could soon be used at airports or mass gathering venues to pick up the "corona odour" of COVID-19-infected people, British scientists said on Monday.
Read more

China’s top diplomat has held a virtual meeting with NATO’s chief to discuss the situation in Afghanistan, amid longstanding disagreements between Beijing and the U.S.-led alliance over regional policies
Read more

I’ve driven the future of electric cars, and it’s...

The future for EVs is very bright if the Mercedes EQS is anything to go by.
Read more

South African President Cyril Ramaphosa has eased restrictions aimed at combating the coronavirus pandemic to the country's lowest alert level, the second such loosening this month as the country looks to open up its economy ahead of the summer holiday season.
Read more

Kerry to Wall Street: Put your money behind your...

Racing 92 overpower Edinburgh to reach the Heineken Champions Cup quarter-finals for the fifth season in a row.
Read more

The Centers for Disease Control and Prevention warned in a document published Friday of "repeatedly documented" instances of coronavirus spreading through the air to people more than six feet away under certain conditions...
Read more

Through the Lens of Nat Geo: Photo Tips With...

When Alex Pietrangelo signed with the Vegas Golden Knights in October, he didn’t mince words as to why he left St. Louis after 12 seasons.
Read more

Is Babylon 5 secretly the most influential TV show...

There are hints of everything from Game of Thrones to Breaking Bad and Lost in the ’90s space opera. Maybe it was ahead of its time.
Read more

"They're trying to whitewash history," Rep. Seth Moulton said of Republicans who pushed the conspiracy theory. "They need to go."
Read more

Iran's president-elect on Monday said the country's ballistic missile program is "non-negotiable" and that he will not meet with President Biden.Judiciary chief Ebrahim Raisi, when asked about Ir...
Read more

New York City will pay $100 for people to get vaccinated against the coronavirus.Starting Friday, residents who get their first vaccine dose at a city-...
Read more

The Food and Drug Administration has granted approval to a drug called Aduhelm, developed by Biogen, for patients with Alzheimer's disease. The decision comes despite warnings from independent advisers that there isn't strong enough evidence to prove the trea…
Read more

His remarks about the unspecified incident are a rare sign of the pandemic’s severity in North Korea.
Read more

Florida is the first state to offer its help to the border situation in Texas and Arizona.
Read more

In the newest edition of its online magazine, Inspire, al Qaeda is calling on its followers within the U.S. to attack American cities with car bombs. Former senior correspondent John Miller, New York City's deputy police commissioner for intelligence, talks a…
Read more

Alibaba working with police to investigate sexual misconduct at...

Chinese e-commerce giant Alibaba on Sunday said it is working with authorities to investigate allegations of sexual misconduct at the company after a female employee said she had been sexually assaulted by her manager....
Read more

You Can Measure This Fundamental Quantum Constant Using LEDs

Planck’s constant helps us understand atomic-sized things. One of the best ways to grok it is through this experiment involving different colors of light.
Read more

Organization connects Latinos to the outdoors

The Latino population is the fastest growing demographic in the U.S., but one of the most underrepresented when it comes to outdoor recreation. Latino Outdoors is seeking to change that. Omar Villafranca shares more.
Read more

Interbrand has announced the brands that have fared best in its 2021 Best Global Brands ranking. Technology companies rule the roost in the list with Apple, Amazon and Microsoft being the top-3 companies.
Read more

Whistleblower says ATF gave bonuses to those who did...

The former ATF employee lost his job after he flagged the alleged violations to his superiors.
Read more

23 Shocking Olympics Moments You Probably Missed From the...

Mexico: Woman who died in police custody also was...

Mexican authorities say a Salvadoran woman who died in police custody over the weekend in a Caribbean resort had also suffered abuse by her companion, who has been arrested
Read more

Australia’s Qantas Group says it expects Sydney’s COVID-19 lockdown to last for at least another two months and it will furlough 2,500 staff due to an associated downturn in domestic flights
Read more

Missouri is seeing a concerning uptick in hospitalizations due to Covid-19's Delta variant. The variant, initially originating in India, is quickly becoming more prominent in the state with a 225% increase in admissions in Springfield since the beginning of J…
Read more

EXPLAINER: The US investigation into COVID-19 origins

Once dismissed by most public health experts and government officials, the hypothesis that COVID-19 leaked from a Chinese lab is now receiving scrutiny under a new U.S. investigation
Read more

Australia has controversially held migrants in PNG since 2013, and will continue to do so in Nauru.
Read more

Toddler falls from home window, mauled to death by...

A 3-year-old boy has died after falling out of a window at his family home and was then mauled to death by the family’s two pit bulls when he landed in the backyard.
Read more

Ingraham: The scientists aren’t president, or are they?

The Canadian developer says it will dismantle their equipment and "ensure a safe termination".
Read more

England wing Joe Cokanasiga says he "lost the reason why I play rugby" as he prepares to play Test rugby for the first time in nearly two years.
Read more

Ali Akbar Mohtashamipour, a Shiite cleric who is considered a founder of Hezbollah, died Monday of the coronavirus.Mohtashamipour died at a northern Tehran hospital after becoming ill with COVID-...
Read more

A herd of 15 elephants bangs on doors and hoovers up food as experts ponder its destination.
Read more

With the more dangerous Delta variant of Covid-19 sweeping across the nation, state and health officials continue to warn the public that the pandemic is far from over despite summertime reopenings and optimism.
Read more

Psaki called out over White House use of ‘anonymous...

India is still struggling to contain the spread of the coronavirus. The public is increasing its calls for nationwide lockdowns as the country reports over 366,000 confirmed cases in 24 hours. CBS News foreign correspondent Chris Livesay reports from New Delh…
Read more

Six-time champion Serena Williams pulls out of US Open

Serena Williams becomes the latest high-profile player to pull out of the US Open as she withdraws because of a torn hamstring.
Read more

The Worst Day in Afghanistan

There are two decades of days to choose from, yet no one is held responsible for them. The post The Worst Day in Afghanistan appeared first on The American Conservative.
Read more

WSJ Editorial Board: Why the $1.9 trillion COVID spending bill is only...