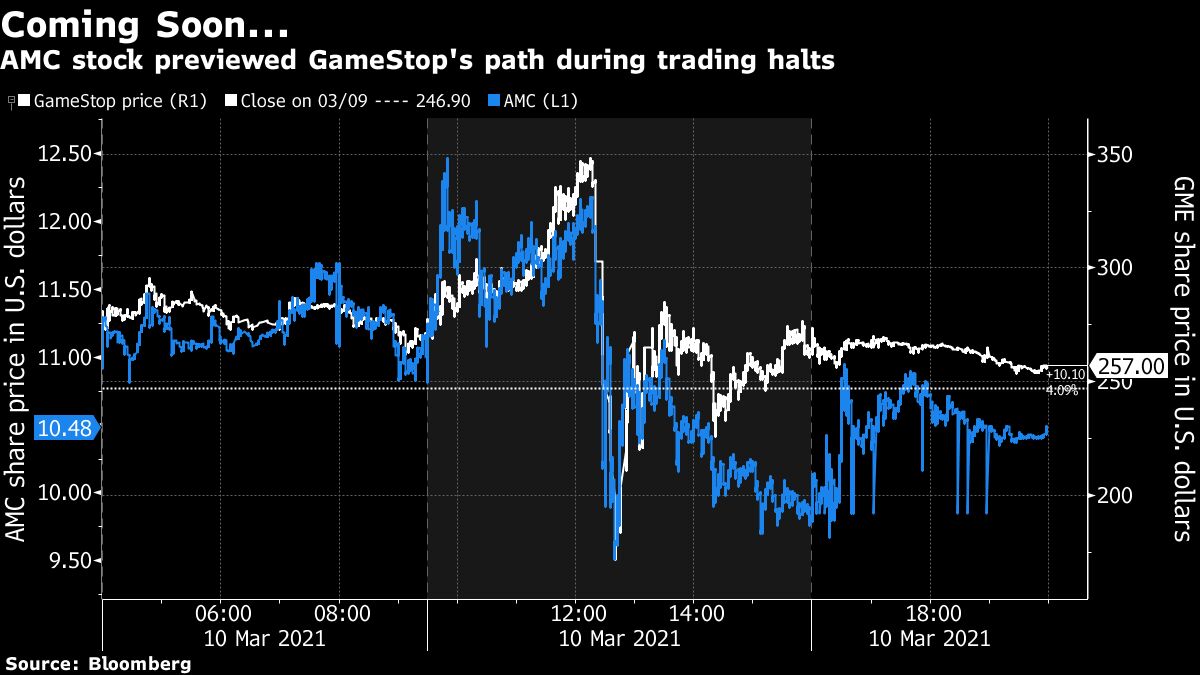 Vexed by Wednesdays repeated halts in

GameStop Corp. shares, day traders were left grasping for clues on where the stocks chaotic journey would pick up after the restrictions were lifted.

They didnt have to look far.

AMC Entertainment Holdings Inc., another wildly popular meme stock among members of Reddits WallStreetBets forum, was a near-perfect predictor for how the market would react after each of the seven pauses.

The movie-theater chains shares plummeted as the first GameStop halt triggered at 12:22 p.m. in New York and continued to fall through the two stoppages that would follow. But at 12:40, just as the video-game retailers shares were to cease trading yet again, AMCs stock began to rally. It was after that fourth pause that GameStop too would change course.

Lily Francus, an independent quantitative researcher, wrote about the relationship on Twitter.

In general the stronger the meme effect on the stock the more highly correlated its associated basket is, Francus wrote on Wednesday. AMC acts as a price discovery mechanism for GME during halts.

In general the stronger the meme effect on the stock the more highly correlated its associated basket is. AMC acts as a price discovery mechanism for GME during halts. It’s not a perfect sieve, but it seems to give a good idea ahead of time what’s coming.

It makes sense that GameStop and AMC have moved in tandem. Theyre the two

most-mentioned names on StockTwits and garner incessant attention from day traders on Reddit. At the same time, theres been growing concern about a

disconnect between the pairs future prospects as Covid-19 lockdowns are lifted.

With assistance by Bailey Lipschultz, and Paul Jarvis

Author of controversial Trump Russia dossier speaks out: ‘I stand by... Author of controversial Trump Russia dossier speaks out: ‘I stand by...

Tensions escalate between China and Taiwan

For those that think their luck's against them, never say never. One Maryland Uber Eats driver and mother of five is sitting pretty after winning a scratch-off lottery ticket for $250,000 a few weeks ago.
Read more

No containment in sight as destruction grows from Western...

Huge wildfires continue to grow in California and Oregon. Officials say the amount of acreage burned in California in 2021 is more than three times what it was for the same time last year, and 2020 was the worst year for wildfires in California history. Lilia…
Read more

The Redmi 10 series will cater to entry-level and budget Android devices ranging from Rs. 6500 to Rs 13000.
Read more

Amazon Should Be Broken Up, Small Merchant Coalition Says...

Cheney set to be face of anti-Trump GOP

When Republicans vote Wednesday to expel House Republican Conference Chair Liz Cheney from the No. 3 leadership post, it will cement the Wyoming Republican and political scion as the face of the anti-Trump movement ...
Read more

The online design platform has become one of the most valuable private firms in the world.
Read more

Boris Johnson's contact details were published on a press release from 2006 and not deleted.
Read more

Lockdown easing: ‘I cannot face the crowds inside the...

Brazil to host Copa America after Argentina is stripped

Brazil will host Copa America for the second consecutive time after Colombia and Argentina were stripped of hosting rights for the tournament, prompting local health experts to criticize the decision to hold the troubled event in one of the countries hardest …
Read more

The Santa Clara Valley Medical Center in San Jose is tracking down hundreds of people who may have been exposed to tuberculosis. The possible exposure affects more than 1,000 people, including 350 newborns. A nurse at the hospital tested positive for the pote…
Read more

Australia’s Melbourne to allow residents to leave city, despite...

Opinion | Would the Founders Have Applauded Our Handling...

American innovation is on the cusp of saving the day, but too much else reflected what Thomas Paine would have called a tired status quo.
Read more

Koch Media's announced its new premium gaming label Prime Matter today along with 12 new titles that it will be releasing in the future.
Read more

Rep. Liz Cheney (R-Wyo.) delivered a defiant speech on the House floor Tuesday night, the eve of a vote that is expected to oust her from her Republican leadership position.Without naming former President Trump, Ch...
Read more

Acting Commissioner Janet Woodcock emphasized that people whose immune systems are not compromised — the vast majority of Americans — do not need additional vaccine doses.
Read more

Researchers spend a decade studying Celebrex, an arthritis drug, to see if it causes heart problems. A similar drug was removed from the market in 2004, as it increased the risk of heart attack and stroke. Dr. Jon LaPook reports.
Read more

Flares were set off and missiles thrown in what police described as "disgraceful" scenes in Glasgow city centre.
Read more

Biden administration announces new round of sanctions against Cuban...

The Biden administration announced its third round of sanctions against Cuban law enforcement entities on Friday, targeting the country's military police.The sanctions were imposed under the Glob...
Read more

Scottish election 2021: When will we know the results?

Scots have cast their votes, but they will not be counted until Friday and Saturday - when will the outcome be known?
Read more

Trump urges Herschel Walker to run for Senate in...

Former President Trump is urging retired NFL star Herschel Walker to run against Sen. Raphael Warnock (D) in Georgia, touting a close ally in a crucial midterm election."Wouldn't it be fantastic if the legendary He...
Read more

Democratic state legislators in Texas staged a dramatic walk-out Sunday night to prevent the immediate passage of a Republican elections bill that would make it harder for some residents to vote. But the bill is not dead: it could get put on the agenda at a s…
Read more

Contractors who powered US war in Afghanistan stuck in...

The director says there's something in her new film for viewers on both sides of the political spectrum.
Read more

DeMar DeRozan had 28 points and Derrick White added 21 for the Spurs to open a nine-game homestand.
Read more

Munis In Focus: Infrastructure And The Bears (Radio)

Hong Kong-based FWD has curbed the ability of its founder’s clan to keep control of the Asia-focused insurer. In an updated prospectus
Read more

Covid has changed the way we work – but...

Most employees want to work from home, but less than half of employers will allow it
Read more

The decision by Victoria means about 40% of Australia's population is under a stay-at-home order.
Read more

In light of rape allegations against Bill Cosby, NBC announced it is scrapping a sitcom starring the legendary comedian. Netflix postponed the release of Cosby's new stand-up special, as well. Also, Billy Joel was awarded the Gershwin Prize for Popular Music …
Read more

The Senate minority leader offered Democrats a plan to avert default for a couple of months.
Read more

The protests come as tensions rise between civilian and military rulers.
Read more

Covid-19: Call for surgery hubs to tackle backlog and...

Qantas Airways Ltd. will auction off items including a pair of old A380 business-class seats in a points-for-prizes sale to use up air miles amassed by frustrated travelers during the pandemic.
Read more

The inaugural voyage of Star Wars: Galactic Starcruiser at Walt Disney World Resort will depart March, 1, 2022! General bookings for this immersive adventure in a galaxy far, far away will open less than one month from now, on Oct. 28, 2021.
Read more

Advertised for ‘sale’ in a fake online auction, these...

Hana Mohsin Khan and other feminist activists say they are being targeted by men hiding behind handles on social media, who are attempting to intimidate them into silence -- and Indian authorities aren't doing enough to stop it.
Read more

The best-selling Prime Day tech deal is this half...

Here are some upcoming events of interest to the banking law community. Unless otherwise noted, all times are local.
Read more

‘SNL’ reflects on a ‘wild ride’ of a season

'Saturday Night Live' reflected on a 'wild ride' of a season that went from pandemic to election to insurrection. Musical guest Lil Nas X ripped his pants.
Read more

For the first time since the pandemic began, Canada has passed a grim milestone, with more new Covid-19 cases per capita than the U.S.
Read more

Myanmar’s ruling junta has declared martial law in six townships in the country’s largest city, as security forces killed dozens of protesters over the weekend in an increasingly lethal crackdown on resistance to last month’s military coup
Read more

The Wolf Tree and the World Wide Web

In this essay from 'Finding the Mother Tree,' Suzanne Simard reflects on parenting, climate change, and the networks at the heart of the forest.
Read more

Jacob Zuma had defied a court order to appear at an inquiry into corruption while he was president.
Read more

Greenpeace call for more support for oil workers to...

The environmental group wants more funds to support the transition for oil and gas workers into the green economy.
Read more

Star Wars: The Acolyte is inspired by The Phantom...

It's the first time the two leaders are meeting since Biden took office in January, and while expectations have been set low, the stakes are high.
Read more

Police in Thailand have clashed with anti-government protesters for a second straight day, firing tear gas and rubber bullets and chasing down fleeing demonstrators
Read more

If any model in the Philips OLED806 range is in your budget, you simply have to audition it.
Read more

Cities across the country are seeing a backlash against new taxes on streaming video. Local governments are trying to make up for lost revenue when people "cut the cord" from their cable companies and switch to services like Netflix and Hulu. Carter Evans has…
Read more

Tiger Woods: ‘Walking on my own’ is goal after...

Golf legend Tiger Woods addressed his recent car crash in an interview published on Thursday, saying that his current No. 1 goal in rehab is "walking on my own."Woods told ...
Read more

Rory Burns' determined 132 on day four at Lord's gives England a chance heading into the fifth and final day of the first Test against New Zealand.
Read more

The airport has set aside and fenced in 180 acres just for the endangered animals.
Read more

Australia’s most-populous state will trial home quarantine for people returning from overseas if they are fully vaccinated, signaling an easing of one of the most hardcore border regimes in the world.
Read more

Ingraham: Biden has presided over a year of death,...

The United States has been facing a COVID-19 surge as the more contagious delta variant continues to spread.
Read more

Manchester City boss Pep Guardiola says VAR missed a crucial penalty for his side as they missed out on securing the Premier League title with a 2-1 defeat by Chelsea.
Read more

Mercedes rolls out luxury electric car in duel with...

Coronavirus: Protests should be allowed during lockdown, say 60...

It comes as more protests are planned for Saturday, including by people campaigning against the lockdown.
Read more

Apple bringing Siri to third-party devices is an absolute...

Apple has taken one of the best aspects of Alexa and Google Assistant - third-party support - to give Siri a fighting chance to be the voice assistant for your smart home.
Read more

Man who exhaled on women outside Trump golf club settles case by...

US diplomats in Baghdad hit with pay cut, may be forced to...