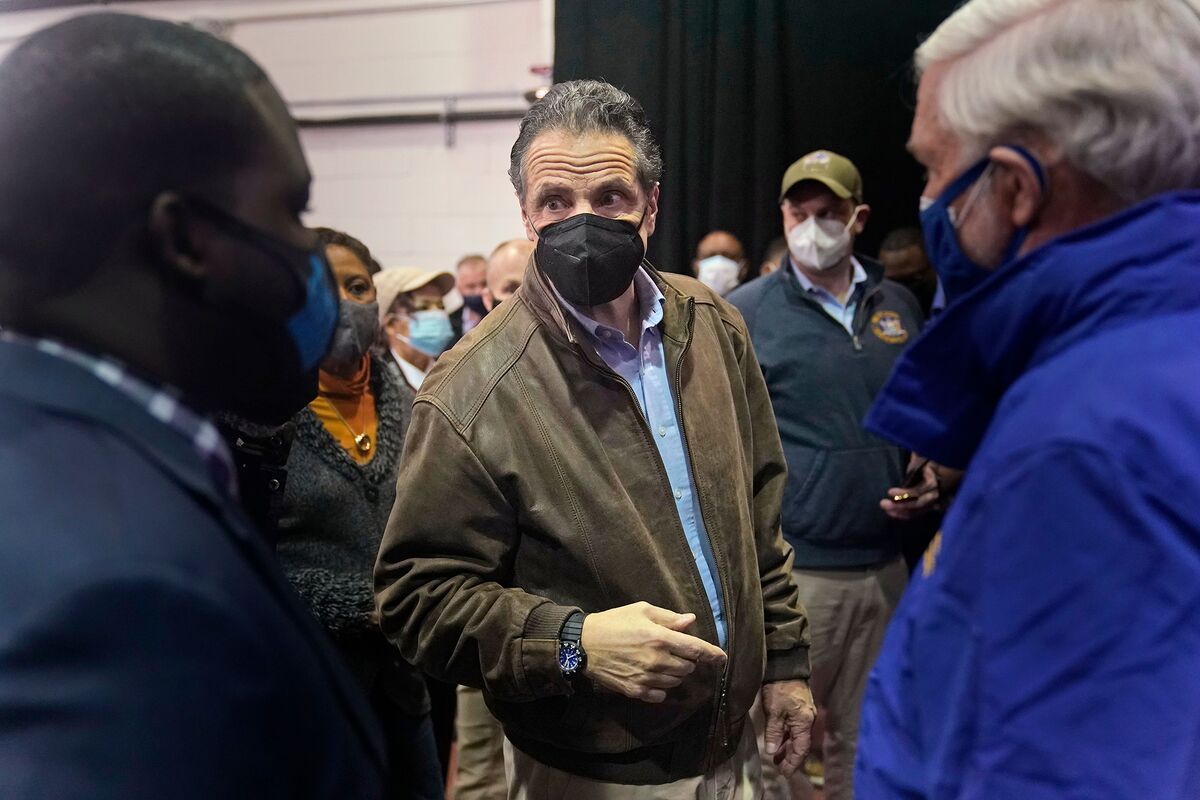 In light of the Governors admission of inappropriate behavior and the findings of altered data on nursing home COVID-19 deaths, he has lost the confidence of the public and the state legislature, rendering him ineffective in this time of most urgent need, the lawmakers said in a statement on Thursday.

Cuomo, a third-term governor, had said on March 7 there is no way he would resign. Two days later, allegations from a sixth accuser surfaced in the Albany Times Union, and details revealed Wednesday allege that the governor aggressively groped her after she had been summoned to the Executive Mansion late last year.

The governor, in response to the paper, denied making any inappropriate advances.

Should he continue to refuse to resign, the legislature could consider impeachment proceedings. A majority vote in the Assembly would be needed for the Senate to conduct a trial.

Mayor Bill de Blasio, one of the governors biggest Democratic critics, said Cuomo can no longer serve as governor.

This most recent report is just disqualifying, de Blasio said Thursday at a briefing. He just cant serve as governor any more.

With assistance by Keshia Clukey, and Henry Goldman

Car accidents cause death, injury and trauma. Why do we shrug... Car accidents cause death, injury and trauma. Why do we shrug... Review: Love, loss and racism in ‘The Son of...

“The Son of Mr. Suleman,” by the late Eric Jerome Dickey, is the profound story of Professor Pi Suleman
Read more

Wolves manager Bruno Lage pays tribute to his side's supporters for giving them confidence to secure a 1-0 win away at Southampton.
Read more

The measure allows for abortions due to life-threatening medical emergencies.
Read more

More than 170 health care workers at a Houston, Texas, hospital were reportedly suspended for two weeks without pay for choosing to not get the coronavirus vaccine by the hospital’s Monday deadline, which the hospital requires of its workers.
Read more

CDC says U.S. can be “cautiously optimistic” as COVID...

Volkswagen has unveiled an electric SUV made for China at the Shanghai auto show, the industry’s biggest marketing event in a year overshadowed by the coronavirus pandemic
Read more

BioNTech SE will seek to follow its successful Covid-19 vaccine with a shot to prevent malaria, both its first solo project and first new infectious-disease effort since the pandemic began.
Read more

Teenager killed by lightning strike at beach while swimming...

A 15-year-old girl has died after being struck by lightning while she was swimming at the beach on vacation.
Read more

This week, Kennedy and Jimmy Failla come together to share their top 5 greatest music videos of all time.
Read more

DAZN app for Android and iPhone: how to download...

DAZN app for Android and iPhone: how to download and watch on phone or tablet  TechRadar
Read more

NHS England call for pregnant women to get Covid...

NHS England says the number of pregnant women seriously ill in critical care with the virus has grown.
Read more

Coronavirus: Transport for London bailout extended until May

The extension will cover TfL until May 18 when many Covid restrictions are expected to have been lifted.
Read more

South Dakota Gov. Kristi Noem is likely to stay among conservative politicians favored by former President Donald Trump with the help of an unusual strategy for a governor
Read more

The latest Pfizer statement has me on the edge

David M. Perry writes that Pfizer's statement about developing a booster shot against Covid, despite US public health agencies saying boosters are not necessary at this time, has created confusion about what comes next for those who are fully vaccinated and g…
Read more

Mike Pence: Biden broke our deal with the Taliban...

The Biden administration’s disastrous withdrawal from Afghanistan is a foreign-policy humiliation unlike anything our country has endured since the Iran hostage crisis.
Read more

Scottish Borders Council says an investigation into how it responded to concerns about Linda McCall will take place.
Read more

It is due to come into force in England next week as some other lockdown restrictions are eased.
Read more

Bowlero in Merger Talks With SPAC Led by Ex-WWE...

Bowlero Corp., an operator of bowling centers that sometimes include full-service bars and arcade games, is in talks to go public through a merger with blank-check firm Isos Acquisition Corp., according to people with knowledge of the matter.
Read more

Trustly Group AB is planning to raise 8 billion kronor ($934 million) in a stock-market listing as the Swedish payment firm becomes the latest fintech to see its fortunes transformed by a surge in demand for online services.
Read more

Sen. John Thune (R-S.D.) is taking his time on reelection, with the former president potentially standing in his way.
Read more

The Hamptons Are Becoming a Legitimate Art Destination

The east end of Long Island is becoming a destination for art lovers, not just art collectors.
Read more

CureVac (5CV.DE) shares fell by as much as 52% on Thursday after the German biotech's COVID-19 vaccine proved only 47% effective in an initial trial, denting investor confidence in its ability to take on established rivals.
Read more

Man Tells Court Killing of Transgender Teen Was ‘Self...

A man accused of murdering Nikki Kuhnhausen, a 17-year-old transgender teenager, back in 2019 told the court that it was out of self-defense.
Read more

Nikole Hannah-Jones on impact and legacy of Ida B....

Ida B. Wells died 90 years ago, but her legacy of advocacy and journalism continues to inspire a new generation. CBS News’ Michelle Miller speaks with Nikole Hannah-Jones and Wells' great-granddaughter about why her trailblazing legacy still inspires today.
Read more

This is the free version of Power On. If you like it, consider subscribing to Bloomberg.com — you'll receive this newsletter several hours earlier and get exclusive access to a Q&A section with me.
Read more

Take the Fight to the Night, Rep. Liz Cheney,...

Bill Whitaker reports on the largest helicopter to ever fight fires at night; Liz Cheney tells Lesley Stahl about running for re-election as an anti-Trump Republican in Wyoming; Sharyn Alfonsi talks to Alexey Molchanov about reaching the top of his sport by d…
Read more

Joe Concha: CNN insulted the MeToo movement by not...

Party’s over for Houseparty as Epic Games announces imminent...

Days are numbered for Houseparty, the social video chat app that achieved overnight success during the Covid-19 pandemic.
Read more

Linux 5.12 release date may be delayed

Growing number of changes is the latest in a series of events that have plagued this cycle.
Read more

Ryder Cup: Collin Morikawa seals win for US against...

Watch the moment Collin Morikawa seals the Ryder Cup for team USA after claiming a half point against Viktor Hovland on the 18th hole at Whistling Straits in Wisconsin.
Read more

Forces loyal to Libya's eastern-based commander Khalifa Haftar have closed the border with Algeria, they said on Sunday, after major deployments of his forces to the south underscored his continued role despite efforts to unify the country.
Read more

DOJ seeks dismissal of case by ACLU, BLM against...

The Apple Watch SE drops to a new record...

Don't miss out on the latest Apple Watch SE deal at Amazon. You can now get the Apple Watch SE for its cheapest price yet, at just £249.17, saving £49.83.
Read more

Bloomberg Westminster: Breaking Out of the Bubble

Chrome is further increasing the privacy of Incognito Mode

A 16-year-old boy found at the scene with head injuries is arrested in connection with the death.
Read more

The girl was walking with her father when the pair were reportedly hit by a car, police said.
Read more

Oregon Man Arrested For Painting Swastika On Memorial Of...

Ryanair Holdings Plc is starting one of the biggest recruitment drives among European airlines, aiming to add 2,000 pilots over the next three years as the carrier plans to grab market share from rivals weakened by the pandemic.
Read more

Prince Philip, the Duke of Edinburgh, has left a London hospital after a successful procedure for a pre-existing heart condition, CNN ...
Read more

China’s EV maker Xpeng gets approval to list in...

Explainer: China’s Mojiang mine and its role in the...

Top U.S. infectious disease expert Dr. Anthony Fauci has urged China to release information about six labourers who fell ill after working in a mine in Yunnan province in 2012, and are now seen as a key part of efforts to find the origins of COVID-19.
Read more

At least four people have died in Nashville after seven inches of rain flooded the city this weekend....
Read more

Everton 1-0 Wolves: Fans are the best thing the...

Austria’s Kurz says he opposes taking in any more...

Within a decade, the world may face a massive shortfall of what’s arguably the most critical metal for global economies: copper.
Read more

Researchers say children need "targeted" support rather than trying to "catch up on everything".
Read more

Facebook’s oversight board: Watchdog or distraction?

Facebook's oversight board, which on Wednesday upheld the company’s ban of former President Donald Trump, also had some harsh words for its corporate sponsor: Facebook
Read more

A suspect was shot and wounded.
Read more

When an enormous statue of Gen. Robert E
Read more

North Carolina Lt. Gov. Called on to Resign After...

Producer Scott Rudin to ‘step back’ from film projects...

Hollywood producer Scott Rudin is "stepping back" from film projects after a slew of bullying accusations rose last week."I am stepping back from my film and streaming projects in ad...
Read more