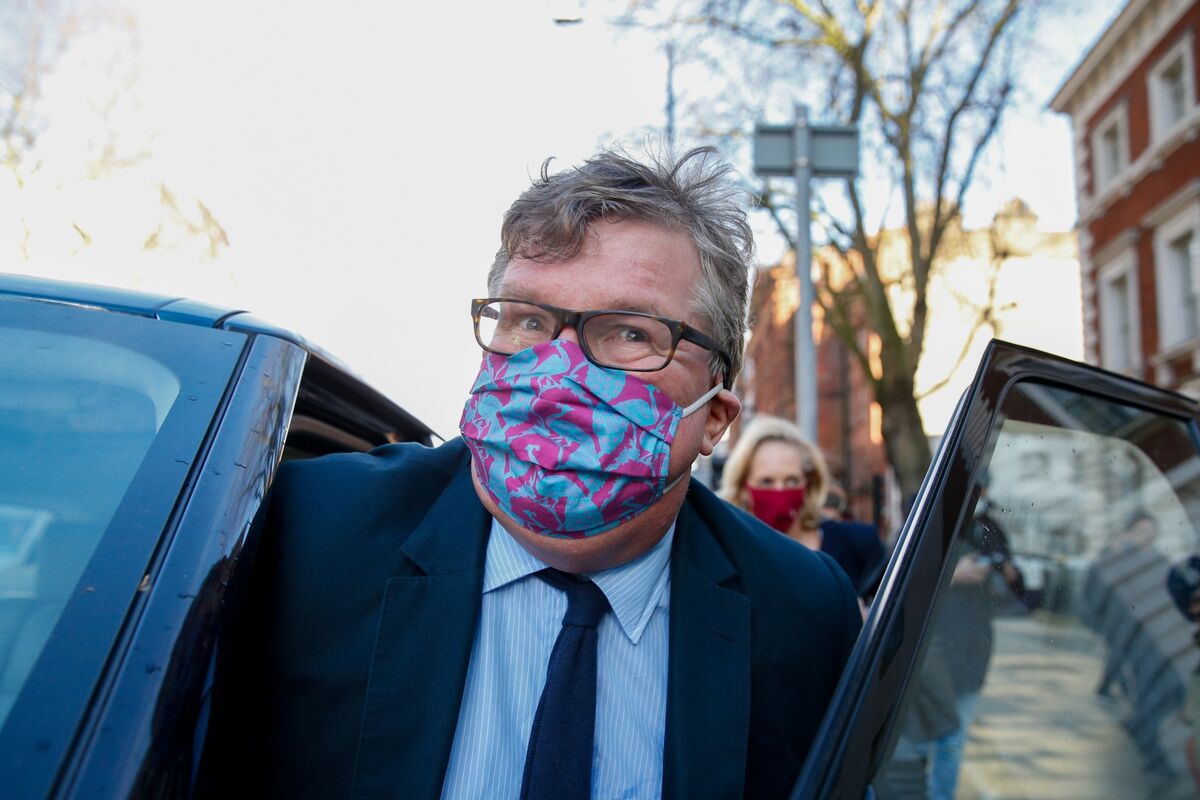 Hedge fund chief Crispin Odey was cleared of charges that he sexually assaulted a young woman more than 20 years ago.

Odey was accused of launching himself at the banker after inviting her back to his home following a meeting earlier that day in the summer of 1998. He said he was attracted to the woman, who was in her 20s at the time, but insisted he never touched her.

The verdict will come as a huge relief for the 62-year-old, whos seen his name dropped from some of the funds managed at his eponymous firm. Meanwhile his flagship fund has recently bounced back with a record gain.

Crispin Odey and wife following the verdict in London, March 11.

The woman, who cant be identified, said Odey had abused his position as a senior client of her firm. But prosecutors were hamstrung by the fact that her colleagues and former boyfriend remembered events differently. Judge Rimmer acknowledged the inconsistencies in testimony but said it was inevitable when dealing with events from so long ago.

Odey testified today that the allegations were a horrible slur.

Odey Asset Management said that Crispin has always maintained his innocence, and we are pleased that he has been found not guilty.

During her testimony last month, the woman said that Odey was a scramble of hands after they returned to his home and described the evening as a groping event.

Odey admitted while he testified Thursday that his intentions werent altogether honorable even as he denied the assault.

Im embarrassed to say that if shed gone along with it, Id have gone further, he said.

Odey said the evening in the summer of 1998 ended very abruptly.

I didnt have much of a memory of how it started, he said.

What’s in, and what’s out, as Democrats reshape Biden bill What’s in, and what’s out, as Democrats reshape Biden bill Ohio's GOP Gov. Mike DeWine on Thursday came out against a controversial bill that would weaken the state's vaccination laws, ...
Read more

The prime minister is "pushing a bill that will restrict... the right to peaceful protest", the Liberal Democrat leader says.
Read more

More than 114,000 first preference votes were rejected in the mayor of London election.
Read more

Tendulkar, 47, shares his diagnosis as India grapples with a huge surge in coronavirus infections.
Read more

84 percent of Trump voters are worried about discrimination...

A large majority of people who voted for former President Trump say they are concerned about anti-white discrimination in the United States, according to a Project Home Fire and University of Virginia poll ...
Read more

Gov. Andrew Cuomo has said he will sign the bill.
Read more

Ariel Henry has been asked why he spoke to the main suspect in the slaying of President Moise.
Read more

Journey Down the Rabbit Hole with This All-New Alice in Wonderland...

Thousands of Haitian migrants have returned to the island after being deported by the US.
Read more

North Carolina's state House moved this week to end remote voting in the chamber after it was instituted to prevent the spread of COVID-19....
Read more

For President Joe Biden and his top aides, the evolution on the Senate filibuster has been a gradual one.
Read more

Police say woman’s death could be linked to Dundonald...

A 27-year-old died at a house after a car was found crashed and abandoned in the early hours of Tuesday.
Read more

Friends reunion to air in UK and Ireland on...

The long-awaited follow-up to the popular US sitcom will feature all six of its original stars.
Read more

Former Trump White House strategist Steve Bannon's choice to buck a subpoena from the House committee investigating the Jan. 6 attack on the Capitol could tee up a big decision for a Justice Department determin...
Read more

The Sierra Nevada red fox is now protected and...

The Sierra Nevada red fox, a rare California species whose population is dramatically dwindling, has been listed as endangered.
Read more

And the DOJ releases part of a key Trump-Russia document.
Read more

A long-hidden “pass-through keyboard” feature has been discovered in Oculus Quest 2’s system software that could make using a keyboard in VR much easier.
Read more

Bolivia’s ‘People of the Water’ try to survive loss...

For many generations, the homeland of the Uru people here wasn’t land at all: It was the brackish waters of Lake Poopo
Read more

When faced with division in the country during the 2020 election, 55-year-old retiree John Inserra decided to pursue a path of societal change. That path became a literal one, across six states, down the center of the country, beginning in North Dakota and en…
Read more

Chauvin defense attorney says he and two others involved...

Eric Nelson, the attorney representing Derek Chauvin, the former Minneapolis police officer charged with murdering George Floyd, revealed a connection between himself and two others that have been involved in the trial du...
Read more

The anonymous messaging app Yik Yak has relaunched after a four year shutdown, the company announced Monday. The platform boasted that it is offering "the same Yik Yak experience millions knew an...
Read more

Osaka thanks fans for ‘all the love’ after French...

Naomi Osaka on Saturday thanked her fans for their support after the four-time Grand Slam champion earlier this week withdrew from the French Open, citing mental health issues.
Read more

Rays vs Yankees live stream: how to watch MLB...

A bad-tempered affair is always guaranteed when New York and Tampa Bay face off - here's how to watch the Rays vs Yankees online and get an MLB live stream today.
Read more

Students whose parents didn't go to college often work instead of joining extracurricular activities, and can lag peers on skills like résumé writing.
Read more

"NCIS" Season 18 ended with a shock for fans, as Ellie Bishop seemed to leave the team to go undercover. Here's what we know about Emily Wickersham potentially leaving the cast.
Read more

Delta is planning to hire 1,000 pilots by next summer as part of its effort to recover from the COVID-19 pandemic.In a memo seen by the ...
Read more

California, the first state in America to put in place a coronavirus lockdown, is now turning a page on the pandemic.
Read more

Russia may be wavering in support of Assad

Russia has been steadfast in supporting Syrian President Bashar al Assad over the last six years. But as the Syrian civil war grinds on, that seems to be changing. Elizabeth Palmer reports this is a possible breakthrough for peace talks.
Read more

Yankees player takes himself out of lineup in wake...

A player for the New York Yankees who formerly played for the Minnesota Twins excused himself from Monday night's game following the fatal police shooting of 20-year-old Black man Daunte Wright during a police traffic sto...
Read more

Google surprises with a hidden pinball game for iOS

Google have brought out another Easter egg game, in the form of pinball for iPhone
Read more

The coronavirus stimulus package and the ongoing vaccination efforts are expected to take center stage when lawmakers hit the airwaves Sunday for the talk show circuit.
Read more

Eight Russian women are among those detained for public debauchery, the Russian consulate said.
Read more

As Leicester prepare to play Manchester City in Saturday's Community Shield, BBC Sport looks at how the Foxes have established themselves among English football's elite.
Read more

Bukayo Saka: Arsenal forward clapped on to pitch by...

Tottenham fans applaud Arsenal's Bukayo Saka on to the pitch on his first appearance since Euro 2020.
Read more

Inside the 5 best celebrity beach homes

Bidens to meet with Carters during Georgia trip

SFO becomes first US airport to mandate vaccinations for...

The San Francisco International Airport (SFO) on Tuesday announced a COVID-19 vaccination mandate for all employees, becoming the first U.S. airport to do so, ...
Read more

Three is the undefeated champion for an unlimited data...

Three is offering an unlimited data, calls and texts SIM for just £16 a month - the lowest price in the UK.
Read more

A deadly mass shooting has left at least 10 people killed and 7 wounded in Southwestern Oregon on the Umpqua Community College campus; an almost mythical Nazi gold train from World War II is believed to have been found in Southwest Poland
Read more

A pricing overhaul plan has faced new resistance this year even as its prospects of becoming law grow more real.
Read more

Greenpeace Activists Paraglide on to ECB Roof To Protest...

Climate activists from Greenpeace paraglided on to the roof of part of the European Central Bank on Wednesday morning, protesting the institution’s support of large corporate polluters through its bond-buying programs.
Read more

After last year’s Eurovision Song Contest was canceled amid the global COVID-19 pandemic, it is roaring back to life with coronavirus bubbles added to its heady mix of music and camp
Read more

UN commission advocates for more women to have roles...

The United Nations' primary committee tasked with advancing gender equality across the globe on Friday adopted a new document promoting the role of women in global-decision making.
Read more

Your Weekend Reading: Bitcoin Endures a Week of Elon...

Biden’s ATF nominee expected to be withdrawn amid bipartisan...

The White House is expected to withdraw its nominee to lead the Bureau of Alcohol, Tobacco and Firearms (ATF) in the face of bipartisan opposition, two sources familiar with the matter confirmed Thursday, dealing a blow t...
Read more

One-third of Afghanistan is facing food insecurity amid the Taliban takeover, according to the United Nations' World Food Programme.
Read more

On the anniversary of George Floyd's death, his brother, Philonise Floyd, said Tuesday it was like “picking at a wound all over again."
Read more

Republican presidential candidate Donald Trump refuses to back down from recent comments about women and Fox News host Megyn Kelly. CBS News contributor and Republican strategist Frank Luntz joins "CBS This Morning" to discuss the tonality of the campaigns an…
Read more

Except for the name, Cannondale's mid-tier ebike is the perfect step-through commuter.
Read more

A pregnant Idaho woman’s baby did not survive after she went into labor earlier this month while in a medically induced coma because of the coronavirus, according to a report.
Read more

A California police officer is facing multiple felony charges for the 2018 shooting death of a man during a slow-speed pursuit, the Contra Costa County District Attorney's Office said in a Wednesday news release. The announcement came the same day local autho…
Read more

Battlefield 6 could skip PS4 and Xbox One, rumor...

A notable Battlefield leaker has suggested that Battlefield 6 may not come to PS4 and Xbox One.
Read more

The glimpses of Byron Buxton's game-changing, worth-the-admission skills have grown broader over the last three years as the Minnesota Twins center fielder has blossomed with the bat to match his long-superior work with the glove.
Read more

‘Pandora papers’ show London is a key hub for...

The British government is facing calls to tighten up defenses against “dirty money” after a leak of offshore data showed how London, in particular, is the venue of choice for some of the world’s richest and most powerful people to conceal their cash
Read more