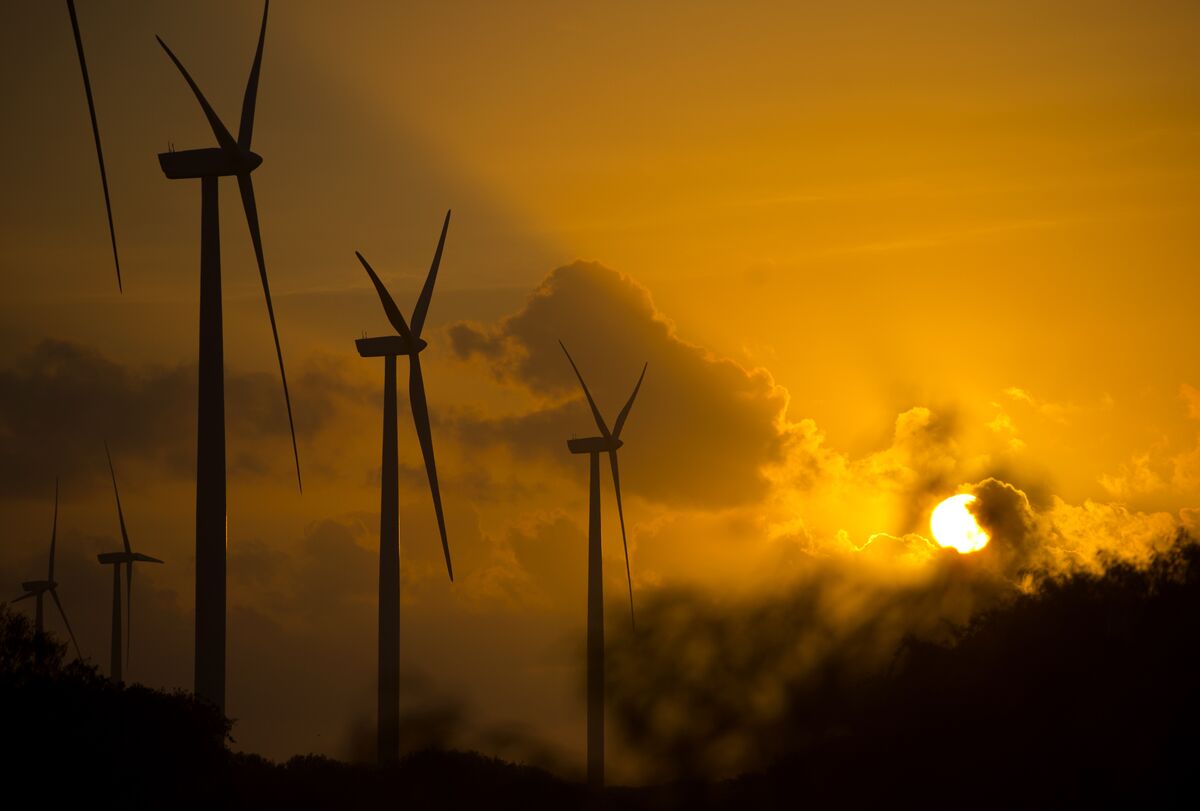 Avangrid Inc., which owns wind farms on the Gulf Coast.

froze in much of the state, Avangrids blades in the south managed to spin. In fact, they produced more power than normal, generating tens of millions of dollars for the company, said Jose Ignacio Sanchez Galan, CEO of Avangrids majority owner, Spanish utility

We got good money from this, Galan said in an interview.

The disclosure is the latest detail to surface in the slowly emerging picture of financial winners and losers from the crisis that left millions of people without power for days. While some plants froze and racked up huge bills buying power on the spot market to meet their contractual obligations, many that kept running generated big returns as prices jumped to record levels.

said its operations were impacted for a short period, but that it met all firm delivery obligations — and delivered excess energy to the grid.

To Galan, the Texas outages underscore a barrier to the expansion of renewable-energy capacity: a shortage of interconnection between electric grids.

Reimagined electric grids could help the U.S. avoid a repeat of what happened in Texas — and support new wind and solar power needed to help achieve President Joe Bidens goal of sourcing all electricity from carbon-free sources by 2035.

Galan said he plans to press the issue of electricity transmission in a meeting with the new U.S. Secretary of Energy Jennifer Granholm. More transmission lines are necessary to link the renewable power resources of various states, he will tell her. The federal government should play a greater role to enable this connection, he said.

(Updates with meeting with U.S. secretary of energy in the last paragraph) The Missouri senator wants to discard what he sees as extraneous elements in the White House proposal.
Read more

Keep ulnar deviation and forearm pronation at bay with the best ergonomic keyboards for work and for play.
Read more

Britain’s Prince Andrew is likely to do anything he can to avoid giving evidence in a U.S. lawsuit filed by an American woman who alleges that he sexually assaulted her when she was 17, lawyers on both sides of the Atlantic say
Read more

On patrol with a real-life Robocop

Police are using a robot to fight crime in Los Angeles.
Read more

Esports a Step Closer to Olympics as IOC to...

Competitive videogames may have moved closer to becoming an official Olympics sport after the International Olympic Committee announced plans to hold a virtual esports event ahead of the Tokyo Games.
Read more

Minnesota shooting victim ID’d as student who was set...

Charlie Johnson was supposed to graduate from college on Saturday – but his sister accepted his diploma instead. That’s because hours earlier, Johnson was among two people killed in an early-morning shooting.
Read more

London's FTSE 250 index edged higher on Friday, helped by gains in industrial stocks and Inchcape, while data showed retail sales fell in May as Britons dined out more following a lifting of pandemic restrictions.
Read more

Parents in Virginia's Loudoun County are hammering the county's school board and the Department of Justice (DOJ) Thursday as controversies cascade in the school district that's become a national political hotbed.
Read more

The virus was mentioned on 15 death certificates in the week to Friday 19 March, figures show.
Read more

State AGs are ‘stepping into the police reform business’...

In the past month, attorneys general in three states have sought a court-ordered overhaul of local police departments, increasingly filling the role the federal government has played for decades of holding accountable police departments that are deemed to be …
Read more

Treatment works are allowed to release sewage into waterways after heavy rain to stop it backing up.
Read more

Singapore Ramps Up Quarantine Hotels To Cope With Covid...

Singapore has increased the number of hotels that can be used to quarantine people as the city-state seeks to control the spread of the virus amid the recent wave of infections.
Read more

The Latest: Pakistan is latest nation to pass 1M...

Simone Biles’ Olympic career may be over but experts...

Simone Biles walked away from the Tokyo Olympics with her head unbowed and her illustrious gymnastic career cemented.
Read more

pTron Bassbuds Sports with up to 32 hours battery...

The new TWS from pTron is priced at Rs 999 and comes with 32-hour long battery life, Bluetooth 5.1, Type-C charger, and more.
Read more

Brunei said on Saturday a non-political representative from Myanmar will be invited to an upcoming summit of leaders from Southeast Asian countries this month, effectively sidelining the leader of a military junta that seized power earlier this year.
Read more

MGM Seeks Control of BetMGM After DraftKings Bids for...

How the FEC is considering fighting scam PACs

UK and France agree deal to tackle rise in...

Barcelona boss Ronald Koeman refuses to answer questions in his latest press conference and calls for support in "difficult times" for the club.
Read more

The extent of the injuries and the cause of the collapse weren't known. The museum reopened after an overnight closure.
Read more

South Korea's central bank said on Tuesday it would raise its focus on environmental, social and governance (ESG) issues in managing its foreign currency assets and prepare guidelines to be applied to these assets going forward.
Read more

Recent rumors suggest that the RTX 3090 Super will be called the RTX 3090 Ti and will feature some impressive specs, making it Nvidia’s strongest GPU yet.
Read more

Opioid abuse spiked during the pandemic. What can Congress...

With Nicholas Wu, Sarah Ferris and Kyle Cheney. ANOTHER KILLER: Bear with me for a second because this is something I have been thinking...
Read more

Larry Millete, the husband of missing mother of three, May “Maya” Millete, 39, has been named a person of interest in her disappearance nearly six months after she was last seen by her family at her home in Chula Vista, California on January 7, 2021. The Chul…
Read more

A CNN legal analyst and outspoken critic of the Trump administration is joining the Justice Department's national security division.Susan Hennessey, the executive editor of the widely read Lawfare site and a former...
Read more

This Is the Year of the Broken Supply Chain

Hey y’all, it’s Austin. As hackers held Colonial Pipeline Co. ransom over the last couple of weeks, in the process threating oil output on the Eastern Seaboard, gas prices jumped and panicked Americans rushed to the pumps. It was a painful reminder of our col…
Read more

An appeals court is allowing a Maine vaccine mandate for health workers to remain in place for now after denying a request for an emergency injunction to block it, ...
Read more

Conde Nast Traveler readers have made their voices heard, naming Disney Cruise Line as the best for the tenth time!
Read more

Cisco Systems Inc. shares fell after the company said its profitability is being squeezed by the cost of securing components needed to meet a surge in orders driven by a rebound in spending on computer networks.
Read more

Sen. Mitt Romney (R-Utah) was booed on Saturday at the beginning of his speech at the Utah Republican Party's organizing convention. Video of the speech published by ...
Read more

Treasury: $590M paid out by victims of ransomware attacks...

A report released by the Treasury Department Friday found that around $590 million had been paid by victims of ransomware payments to their attackers in the first six months of 2021, as such attacks skyrocketed. ...
Read more

About $2 trillion of investment funds have already been impacted by the new European regulation known as SFDR.
Read more

Five people in Edinburgh hospital after being hit by...

Two men and three women are taken to hospital after being struck by a car in Edinburgh city centre.
Read more

Front-runner for Iran presidency is hardline judge sanctioned by...

Ebrahim Raisi's record of fierce loyalty to Iran's ruling clerics helps explain why the senior judge is a front-runner in Friday's presidential election, a contest the authorities have limited almost exclusively to hardline candidates like him.
Read more

JoJo Was At Her Lowest Point. Now She’s Just...

After years of being kept from releasing new music, JoJo's latest collection 'Trying Not to Think About It,' which candidly chronicles her struggles with mental health, proves her perseverance in the industry has been worth it.
Read more

Kellie Wood on the Markets (Radio)

The boy's mother "absolutely saved her son's life," an officer said, adding she did it "with her bare hands."
Read more

With the three-pack, you can get internet connectivity in every corner of your home at a startlingly low price.
Read more

A NASA scientist said Wednesday that the likelihood of the Bennu asteroid hitting Earth within the next century or two has increased. However, Davide Farnocchia stressed that Earthlings shouldn't...
Read more

Dad Who Deducted Bribe to Get Daughter Into USC...

An associate professor of dentistry at USC pleaded guilty to filing a false tax return after claiming as a charitable donation the $100,000 bribe he paid to get his daughter into the school, becoming the 31st parent to admit participating in a massive U.S. co…
Read more

Lewis Hamilton breaks down as in Dutch Grand Prix...

Twitter tells users to be nice and think twice...

Stevenson vs Nakathila live stream: how to watch title...

It's youth and skill vs power and experience in this compelling clash of styles - here's how to watch a Shakur Stevenson vs Jeremiah Nakathila live stream, no matter where you are.
Read more

The Biden administration has been facing a continuing crisis at the southern border after taking office in January, and so far there are few signs of it slowing down significantly – with the number of migrants and seizures of the deadly drug fentanyl continui…
Read more

An all-white Pennsylvania school board this week voted to rescind its ban on books having to do with race and social issues after students protested the decision.Last October, the York School District 1 Board ...
Read more

Will Ocasio-Cortez challenge Biden or Harris in 2024?

Biden speaks with Israel’s Netanyahu again amid ramped up...

President Biden and Israeli Prime Minister Benjamin Netanyahu spoke again Saturday as violence between Israel and militants in the Gaza Strip continues to escalate.According to a readout of the call provided by the...
Read more

The Sony WH-1000XM3 headphones have plummeted in price in the US and the UK.
Read more

NFTs are both priceless and worthless