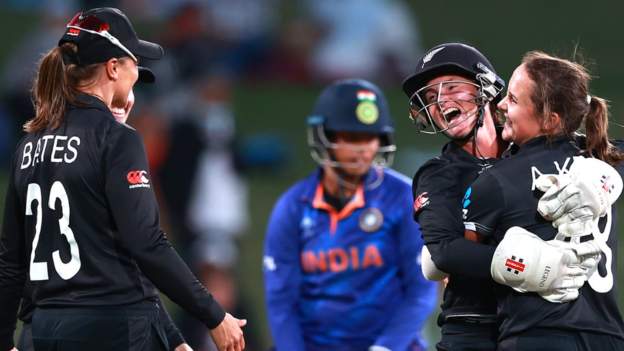 New Zealand are now joint top of the World Cup group-stage table, alongside Australia and West Indies, having played one game more

India, despite impressing with the ball, struggled with the bat and fell well short of the White Ferns’ 260-9.

Amy Satterthwaite and Amelia Kerr both hit half-centuries for New Zealand, before Kerr turned the match with two wickets in two balls.

India face West Indies, who have a 100% record so far, at the same venue on Saturday (01:00 GMT), with New Zealand back in action almost 24 hours later (22:00 GMT, Saturday) against tournament favourites Australia.

New Zealand were surprisingly beaten by West Indies in the opening game of the tournament, but have bounced back with consecutive victories.

Their batting was solid, if unspectacular, in posting a stiff target for India.

However it was in the field where their class – and potential tournament-winning pedigree – shone through.

They kept a miserly check on the run-rate, with the pace, accuracy and hostility of Lea Tahuhu (3-17) complemented by a battery of skilful seam and spin bowlers.

And perhaps the most skilful of them all is 21-year-old leg-spinner Kerr, who halted an India fightback with a superb 30th over.

As Mithali Raj and Harmanpreet Kaur, two of India’s most experienced players, began to find the boundary with more regularity, Kerr stepped up.

First she had Raj expertly stumped with a fizzing leg-break before, from the very next ball, Richa Ghosh was bamboozled by a googly that rocked back her off stump.

India did have moments of their own, but they were mainly in the field, where the death bowling of Pooja Vastrakar (4-34) caught the eye.

There was also a landmark moment for 39-year-old Jhulan Goswami who became the joint leading wicket-taker in World Cup history by claiming her 39th victim.

India were always behind the run-rate against New Zealand

Facebook will demote Russian state media across its entire...

How AllianceBernstein’s Kate Burke pivoted from HR to CFO

Accuser’s mom: R Kelly’s threats made her fear for...

Canon’s EOS R5C is a hybrid cinema camera with...

A Leak Details Apple’s Secret Dirt on Corellium, a...

Woman sentenced to prison for setting fire to police...

At Davos, CEOs Fret Over Economy, Start to Plan...

Holiday sales up 7.6% despite the squeeze of inflation

This week on “Sunday Morning” (January 8)

Workers clash with police at iPhone factory in China

COVID-19’s impact on the brain: Immune response may cause...

A Fed economist says the Fed is making inequality...

Woman sues over ban on feeding homeless people in...

Is a Disney Plus free trial available in 2022?

Jordan Spieth on the joy of trash-talking Tiger Woods

Russia’s Gazprom to shut gas pipeline to Europe for...

San Francisco police seek permission for its robots to...

The Morning After: Ukraine lost Starlink access over funding