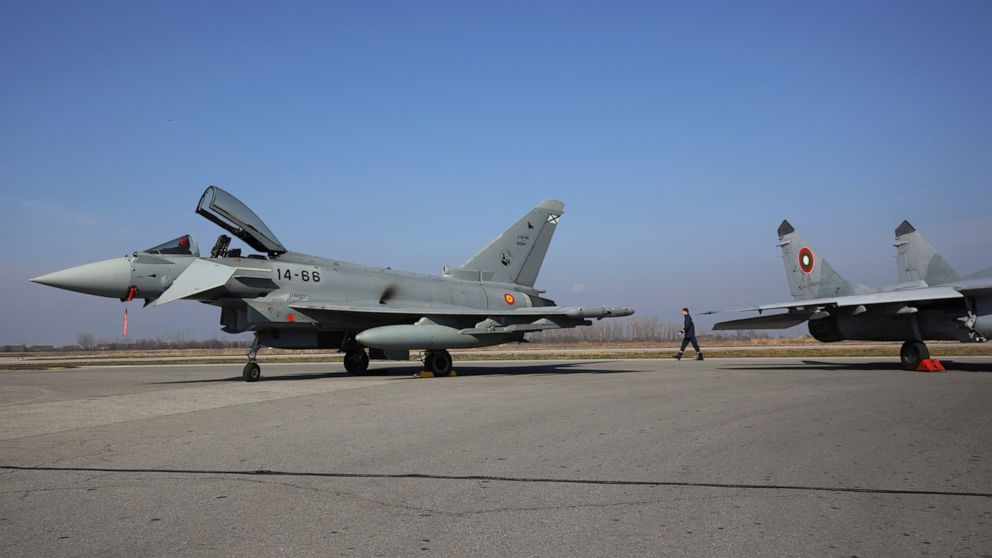 WASHINGTON — The Pentagon on Wednesday firmly rejected a Polish proposal for providing Ukraine with MiG fighter jets, saying allied efforts against the Russian invasion should be focused on more useful weaponry and the MiG transfer with a U.S. and NATO connection would run a high risk of escalating the war.

By rebuffing the proposal involving the the Polish jets, the Pentagon appeared anxious to move beyond what had become an awkward disconnect with a NATO ally at a time when President Joe Biden has stressed the need for a unified and coordinated response to Russia’s war.

Ukrainian President Volodymyr Zelenskyy has pleaded repeatedly for the U.S. to provide his military with more aircraft presented as an apparent alternative to establishing a no-fly zone over Ukraine to suppress Russian air power. The no-fly idea was rejected earlier by Washington and NATO as an unnecessary risk of escalation.

Last week, Secretary of State Antony Blinken had said Washington was looking at a proposal under which Poland would supply Kyiv with the Soviet-era fighters, which Ukrainian pilots are trained to fly, and in turn receive American F-16s to make up for the loss.

But Poland wanted no part of that, concerned about involving itself too directly in conflict with Russia. Poland then said it was prepared to hand over all 28 of its MiG-29 planes but to NATO by flying them to the U.S. air base in Ramstein, Germany, from where they would somehow be flown to Ukraine.

That was the arrangement the Pentagon turned aside.

U.S. House Speaker Nancy Pelosi said that in a phone call, Zelenskyy on Wednesday again asked urgently for the United States to provide warplanes, anti-aircraft missiles and other weaponry.

Kirby said the Biden administration is talking with other countries about alternative options for supporting Ukraine’s most pressing defense needs two weeks into its war, especially more ground-based weapons to counter Russian tanks and aircraft in what has been largely a ground war. Kirby said those could include surface-to-air missile batteries and shoulder-fired anti-aircraft missiles.

Secretary Austin thanked the minister for Poland’s willingness to continue to look for ways to assist Ukraine,” Kirby said. He stressed that we do not support the transfer of additional fighter aircraft to the Ukrainian air force at this time and therefore have no desire to see them in our custody, either.

U.S. Vice President Kamala Harris arrived in Warsaw Wednesday night for consultations, but the White House said she was not directly involved with the matter of the planes.

Kirby cited three main reasons Austin rejected the Polish offer, starting with the U.S. view that it would be wiser to provide Ukraine with weaponry that would more directly strengthen its defenses, including anti-armor and air defense systems. Kirby said the Russian air force, while much larger than Ukraine’s, has not played a lead role in the Russian offensive and has been of limited effectiveness due to Ukraine’s use of ground-based air defenses, which include Stinger missiles.

Kirby said Ukraine still has a significant number of its own aircraft, and the U.S. believes that adding aircraft from other nations is not likely to significantly change the effectiveness of the Ukrainian air force relative to Russian capabilities.

Also, the U.S. intelligence community has assessed that transferring MiG fighters to Ukraine may be mistaken as escalatory and could result in significant Russian reaction that might increase the prospects of a military escalation with NATO,” Kirby said. Ukraine is not a NATO member, but some of its neighbors are, and the alliance is trying to avoid a spillover of the war.

While Kirby’s statement appeared to bring an end to the Polish proposal, the appearance of a public disagreement among allies could have more lasting impact. Last week, the U.S. government threw Poland a hot potato with the request to send the Soviet-made fighter jets.

That plan took the U.S. off guard. By late Tuesday, the Pentagon called it untenable. On Wednesday, Secretary of State Blinken said that ultimately each country would have to decide for itself how to help Ukraine.

Poland is a crucial ally in the Ukraine crisis. It is hosting thousands of American troops and is taking in more people fleeing the war in Ukraine than any other nation in the midst of the largest European refugee crisis in decades.

It has suffered invasions and occupations by Russia for centuries and still fears Russia despite being a member of NATO. It already had to contend with the Russian territory of Kaliningrad on its northeastern border and is uncomfortably aware of Russian troops across another border, with Belarus.

In a visit Wednesday to Vienna, Polish Prime Minister Mateusz Morawiecki insisted that Poland is not a party to the Ukraine war and that any decision on whether to send the fighter jets could not be one for Warsaw alone.

It carries the risk of very dramatic scenarios, even worse than those we are dealing with today,” Morawiecki argued.

Michal Baranowski, director of the Warsaw office of the German Marshall Fund think tank, told The Associated Press the Warsaw government was blindsided and surprised by Blinken’s public statement last week. This was seen as pressure from the U.S. on Warsaw. And therefore the reaction was to put the ball back in the U.S. governments court,” Baranowski said.

It all should have been dealt with behind the scenes, he said. Ukraine war: The volunteer drivers risking their lives to...

Hong Kong news outlet to close amid crackdown on...

Evgeny Lebedev: I am not some agent of Russia

Marjorie Taylor Greene Suggests How Russia and Ukraine Can...

Samsung Galaxy S23 selfie camera could get a key...

Disney+ ad-free subscription cost to rise by 38% in...

Texas school shooter would not have followed a ‘single...

Childhood hepatitis: Why are we seeing an unusual spike...

Phil Mickelson won’t defend his title at the PGA...

A New Covid Shot from Novavax Will Test Americans’...

Deutz Fires Chairman After Clash With Supervisory Board

Many families are being left behind amid economic growth

Food banks under pressure amid high inflation and rising...

How To Skyrocket Your Career Using Technology

Suspect in custody in connection to threat made against...