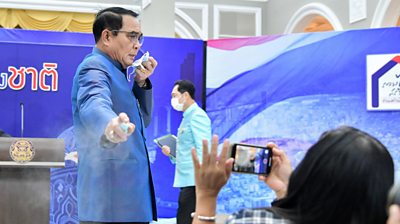 Thai Prime Minister Prayuth Chan-ocha surprised journalists at a recent press conference when he chose an unusual way to deflect their questions.

When asked about a cabinet reshuffle, he picked up a bottle of sanitiser and began spraying reporters.

The retired army general has been in power since a 2014 military coup, and has a history of acting controversially at press events.

In the past he was caught on camera patting a reporter’s head and tugging his ear, and once brought out a life-sized cardboard cutout of himself to “answer” questions. Simone Biles takes herself out of fifth Olympic event

U.S. gymnastics star Simone Biles has taken herself out of the women's final for floor competitions at the Tokyo Olympics, marking the fifth event from which she was withdrawn.USA Gymnastics announced Biles's decis...
Read more

Some preorders are going to take longer to be delivered, although the problem does seem to be a regional one.
Read more

Gas-powered home lawn-care machines for mowing, trimming and blowing have generally been accompanied by deafening roars and fumes
Read more

U.K. Brexit Minister David Frost said there is “still quite a big gap” with the European Union on the future of Northern Ireland, after the bloc presented proposals to fix issues with the post-Brexit settlement.
Read more

George Conway, husband of White House counselor Kellyanne Conway, withdrew his name from consideration for a top position at the Justice Department. CBSN's Erica Pitzi has the latest.
Read more

The 40-year-old allegedly contacted a man via the dark web to paralyse his ex-girlfriend.
Read more

Back to the office in two weeks’ time, says...

Employers can plan for workers to return to offices from 19 July, the government says.
Read more

Mexico police under fire after woman’s death in custody

Mexico's president said the mother-of-two from El Salvador had been "brutally treated and murdered".
Read more

Residents are searching for missing loved ones amid their destroyed homes on the outskirts of Congo’s eastern city of Goma, where light aftershocks were detected in the area following the eruption of a large volcano
Read more

Audible's latest deal can save new customers $60 on a yearly Audible Premium Plus membership - but only for a limited time.
Read more

The rise of “gaming disorder”

The World Health Organization is poised to list "gaming disorder" - the point at which playing video games takes precedence over other life interests and daily activities - as an official human malady. Jane Pauley reports.
Read more

The head of the police union in Portland shot back against new criticism from City Commissioner Jo Ann Hardesty – who has spearheaded the local defund police movement – over the recent resignation of all 50 members of the police riot squad, arguing her self-s…
Read more

‘Lockdown taught us we’re more than just a gym’

On Monday, businesses will reopen after months of being closed, but can they adapt to the "new normal"?
Read more

The United Nations Security Council on Saturday underscored the "immediate need for humanitarian assistance" to Palestinians in Gaza, following the 11-day battle between Israel and militant group Hamas that ended in...
Read more

Watch some of the best moments from the early events of day seven at the Tokyo Olympics, including a historic BMX gold and silver for Great Britain, two more medals in the pool and rowing bronze for the men's eight.
Read more

The Wrong Way to Go On Safari, According to...

And other travel tips from Drew Doggett.
Read more

These looping GIFs reveal what Samsung is likely to be showing off at the start of next month.
Read more

This Microsoft Teams update could be the most controversial...

Dr. Anthony Fauci characterized the Delta strain of the coronavirus as a "nasty variant" during an interview on Sunday.Appearing on ABC's "This Week," Fauci said Americans who are not vaccinated against the coronav...
Read more

The Bake Off star, and the former Strictly judge are made dames, while the actor is now a knight.
Read more

An intricate phishing campaign combines several tools of the trade to trick users into revealing their credentials.
Read more

Incoming chief executive will be expected to deliver on the money-losing retailer's plan for a digital makeover.
Read more

The blogger died several weeks before her body was found, according to Wyoming officials.
Read more

Up to nine matches could be shown on giant TV screens in central London if licensing is approved.
Read more

Senate sergeant at arms: More concerned about cyberattack than...

Such an attack could "cripple the government's ability to function," Senate Sergeant at Arms Karen Gibson said.
Read more

Roger Federer confirms he will play in this year's French Open, which begins on 30 May.
Read more

"I'm proud to be Hispanic and I'm 100 percent behind Donald Trump," says a former police chief in Texas - and he's not alone. CBSN explores why Trump resonates with some members of the Latino community.
Read more

Democratic presidential candidate and Vermont Sen. Bernie Sanders sits down with CBS' "Face the Nation" to discuss his campaign against Hillary Clinton and his path to the nomination. The interview aired Sunday, April 10, 2016.
Read more

US to restrict travel from India over COVID starting...

The U.S. will restrict travel from India starting on May 4, the White House says, citing a devastating rise in COVID-19 cases in the country and the emergency of potentially dangerous variants of the coronavirus
Read more

Assassin’s Creed Infinity: what you need to know about...

What exactly is Assassin’s Creed Infinity? Read on to find out.
Read more

Eleven people were charged with disorderly conduct and disrupting a public meeting this week after they allegedly  shut down a school board meeting by protesting mask wearing.Utah's Granite School District attempte...
Read more

The Department of Homeland Security (DHS) warned Friday that the recent easing of some coronavirus restrictions could provide new opportunities for domestic extremists. "Violent extremists may se...
Read more

Covid-19: Johnson to get Oxford jab and Paris re-enters...

Broadway tickets to go on sale for September reopening

New York's major theatres have been closed since March 2020 because of the coronavirus pandemic.
Read more

Authorities in Portugal are investigating a police officer for beating a man in front of his young son outside a soccer stadium. The whole altercation was caught on video and has sparked some protests in the country.
Read more

Guy Benson Torches Media For Jumping To Conclusions In...

Listen To Guy’s FULL Monologue Below: On today’s Guy Benson Show, Guy gave a monologue criticizing the media jumping to conclusions over a accident that took place at a pride celebration in Florida over the weekend. Guy Benson said, “It was confirmed that the…
Read more

The nationwide battle over abortion is now focused squarely on Texas after the state's "fetal heartbeat" law went into effect Wednesday.While opponents were hoping the Supreme Court would interve...
Read more

The number of infections in the United Kingdom hit its highest daily count in six months on Friday, surpassing 50,000 cases days before coronavirus restrictions are set to be lifted.There were ...
Read more

‘Guidance is to just do it:’ Military expects additional...

The news comes hours after the military carried out a drone strike on an ISIS-K target in Nangarhar province in Afghanistan believed to be involved in planning attacks in Kabul.
Read more

Mental health crisis ends in cells for too many,...

Official data shows how many people in mental health crisis police held in a year in England and Wales.
Read more

A large Iranian navy ship was seen in the Baltic Sea and appears to be heading toward Russia.The Danish Defense Ministry posted aerial photos of the Iranian destroyer Sahand making its way throug...
Read more

DeSantis and Abbott are against vaccine passports, which is...

The Republican governors of Florida and Texas are headed toward showdowns with some of the world's largest cruise lines, including Norwegian and Carnival, over whether passengers boarding ships leaving their states can be required to show proof they've been v…
Read more

Canon rumored to be prepping its biggest ever launch...

Canon might be about to announce its biggest single batch of new lenses, according to credible rumors.
Read more

Two months after leading the Tampa Bay Buccaneers to a historic victory at their home stadium in Super Bowl LV and proudly declaring, “We’re going to Disney World!” alongside his teammate Rob Gronkowski, Super Bowl MVP Tom Brady got the chance to celebrate th…
Read more

CEOs are getting paid bonuses like there was no...

President Biden on Thursday said that ceasefire between Israel and Hamas would begin in under two hours, celebrating the development and pledging to continue U.S. diplomatic efforts.Biden credited the "intense dipl...
Read more

Saudi Arabia said it destroyed a bomb-laden boat in the Red Sea near the refinery hub of Yanbu Tuesday.
Read more

Hey Guys! Here are the most used intro greetings...

Ever wondered what greeting most creators use in their vlogs? YouTube shares some interesting insights.
Read more

Andrew Yang is ‘breaking up’ with the Democratic Party...

Andrew Yang, who unsuccessfully sought the 2020 presidential nomination and New York mayoralty this year as a Democrat, said Monday he is "breaking up" with the Democratic Party and has registered as an independent.
Read more

Dustin Poirier beats Conor McGregor in the first round of their trilogy fight at UFC 264 in Las Vegas.
Read more

Younger Buyers Are Coming into Our Market: Sotheby’s Wine

Jamie Ritchie, the worldwide head of Sotheby's Wine, discusses the demand for alternative assets as digital art and other collectibles soar in value. He speaks with Bloomberg's Caroline Hyde, Romaine Bostick, and Joe Weisenthal on "What'd You Miss?" (Source:…
Read more

Amazon.com Inc. founder Jeff Bezos has the resources to launch himself into space. Elon Musk does, too.
Read more

Climate for net-zero changes Down Under – Reuters

Australia Prime Minister Scott Morrison is dithering daily about attending the looming COP26 climate summit in Glasgow. Meanwhile, his right-wing coalition government still has no plan to improve its target of reducing greenhouse-gas emissions by 28% by 2030 …
Read more

Republican nominee Donald Trump veered off of his prompter script Tuesday in North Carolina, aggressively going after Hillary Clinton for the latest in the email saga, painting her actions as criminal. He eventually got back on track, trying to appeal to mino…
Read more

Mozambique Palma attack: How people tried to flee the...

A pickup truck ran over two people, killing one of them, and narrowly missing a member of Congress during a pride parade in Florida on Saturday evening, according to ...
Read more