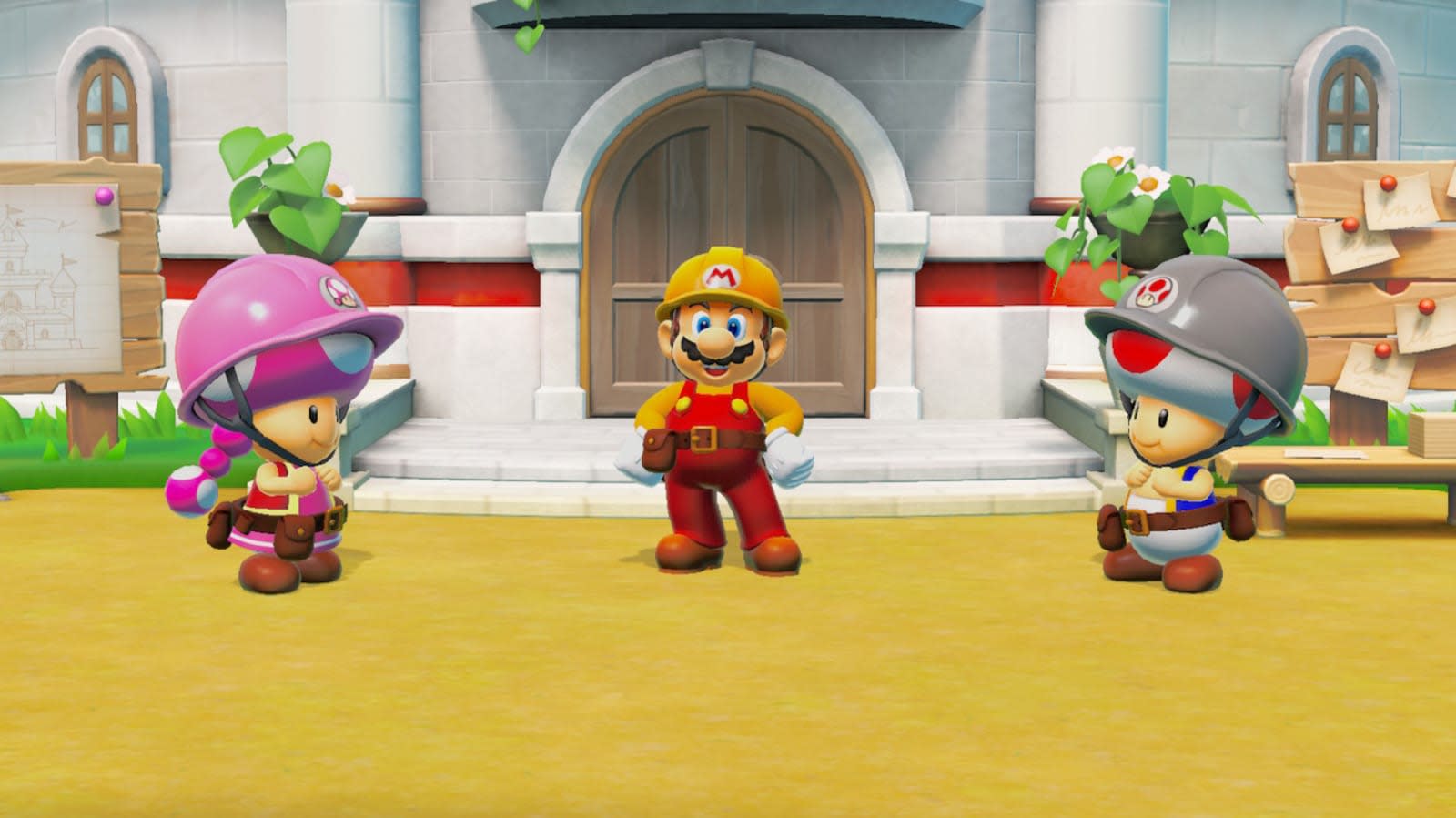 Nintendo’s annual Mario appreciation day, dubbed Mar10 Day, is tomorrow and the company has already started celebrating by discounting some Switch games. Through March 13, you can get 35 percent off Super Mario Party, Luigi’s Mansion 3, Super Mario Maker 2 and Mario Tennis Aces at Nintendo’s eShop or Amazon. That discount brings all of those titles down to just under $39, which is an all-time low for some of them. Those are the games Nintendo’s highlighting for Mar10 Day, but a number of other Mario games are on sale at Amazon including Super Mario Odyssey for $39, Super Mario Bros. U Deluxe for $39 and Mario Kart 8 Deluxe for $49.

While not all Mario games are on sale, you can grab quite a few titles at good sale prices this week. It’s also worth noting that Super Mario 3D All-Stars, Nintendo’s collection of classic Mario games remade for the Switch, will not be sold for much longer. Nintendo’s pulling the collection from physical and digital shelves on March 31. We doubt it’ll see a huge price drop before the cut-off date, so if you want it, you have only a few more weeks to get it.

Those are the best deals happening for Mar10 Day this year, but Nintendo’s also celebrating with special in-game extras throughout the month. Players of Animal Crossing: Pocket Camp will notice special poses for Fave Photos throughout March in addition to past event items coming back for a limited time. Anniversary-themed items are also coming to Animal Crossing: New Horizons and new tours, drivers, karts and gliders will pop up in Mario Kart Tour, too. Here's how to get a Los Angeles Chargers vs Las Vegas Raiders live stream and watch NFL Sunday Night Football from anywhere, as the AFC West rivals fight for the last playoff spot.
Read more

Nikon has announced that it's developing the Z9, a flagship full-frame mirrorless Z mount model with "the best still and video performance in Nikon history." The new model will be released in 2021 with 8K video and other advanced features. Nikon said that the…
Read more

A women's Tour de France is set to take place for the first time in 33 years in 2022.
Read more

Sen. Kyrsten Sinema (D-Arizona), a centrist who has frustrated House progressives with her opposition to raising the corporate tax rate as part of the Biden climate and social spending package, criticized Democrats in a n...
Read more

The Hundred: India’s Smriti Mandhana and Harmanpreeet Kaur to...

India's Smriti Mandhana and Harmanpreet Kaur will play no further part in The Hundred, with both returning home for a period of rest before touring Australia in September.
Read more

Meet Bellator's rising star Luke 'The Gent' Trainer, who is making a difference by helping to care for foster children while also being a full-time fighter.
Read more

Next Plc will run Gap Inc.’s business in the U.K. and Ireland just months after the U.S. retailer announced it was closing all 81 stores and moving to an online-only operation in the two European countries.
Read more

Philadelphia 76ers superstar Joel Embiid was fined $35,000 for his role in an altercation with Atlanta Hawks forward John Collins during the fourth quarter of Game 6 on Friday night.
Read more

Aston Villa captain Tyrone Mings and Wolves captain Conor Coady join up with Dion Dublin to discuss whether progress has been made in tackling racism in football.
Read more

Asian shares are trading mixed after a worrisome report on U.S. inflation that slammed into the bond market and knocked stocks lower on Wall Street
Read more

Ford is recalling about 200,000 cars in the U.S. to fix a problem that can stop the brake lights from turning off
Read more

AWS and Elastic could soon end their legal battle now that AWS has forked Elasticsearch and changed its name to OpenSearch.
Read more

Gasoline futures are ticking higher following a cyberextortion attempt on a vital U.S. pipeline that carries fuel from the Gulf Coast to the Northeast
Read more

Everyone’s favorite “Little Chef” is cooking up something really big for Walt Disney World Resort’s 50th anniversary, because the grand opening of Remy’s Ratatouille Adventure at EPCOT is set for Oct. 1 of this year!
Read more

Google Pixel Watch could have a powerful chipset and...

A big leak has revealed the possible chipset of the Pixel Watch, along with a Google Assistant upgrade.
Read more

The vaccine mandate would have taken effect January 12, but the stay pauses its enforcement until an appeals hearing, scheduled for March.
Read more

Drugs, arms, and terror: A high-profile defector on Kim’s...

A former colonel describes a leadership making cash by any means, from drug factories to illegal arms deals.
Read more

Five people from the Czech delegation for the Olympics, including three athletes, have tested positive for the coronavirus after a flight to Japan that is under investigation.A probe into the fli...
Read more

Body of missing University of Alabama student found in...

The prime minister says he does not want to increase hostilities with France over the fishing row.
Read more

Watch as Afghanistan start their Super 12 campaign with a brilliant batting performance, hitting a 11 sixes on their way to a 130-run thrashing of Scotland.
Read more

U.S. and Europe ready ‘significant and severe’ sanctions if...

U.S. officials have escalated their warnings that Washington will retaliate if Moscow moves its forces across the border into Ukraine.
Read more

Review: The groove is still the thing for Steve...

Memphis soul man Steve Cropper has spent his career carving out great grooves on guitar, and his new album is all about the beat
Read more

California Gov. Gavin Newsom (D) on Tuesday won a broad and renewed mandate from voters who soundly rejected a recall attempt on the strength of a mammoth turnout campaign that targeted Democratic voters.Newsom is...
Read more

Venezuela says IMF has not delivered COVID-19 funds amid...

Venezuelan Vice President Delcy Rodriguez said on Wednesday that the International Monetary Fund (IMF) has not yet delivered funds under a program to help countries battle the COVID-19 pandemic, amid a dispute over the government's legitimacy.
Read more

Fast-food workers have to put up with some dangerous situations.
Read more

The Intel Core i5-12490F processor wasn’t shown at CES, but has been spotted in China.
Read more

Wander Franco hit a tiebreaking two-run homer in the sixth inning, Drew Rasmussen threw four strong innings in a spot start for Tampa Bay and the Rays added to their lead in the AL East with an 8-1 victory over the Boston Red Sox on Thursday.
Read more

A CDC panel recommended Friday to end the pause on the Johnson & Johnson vaccine. But the shot will come with a warning about the potential risk of rare, but dangerous, blood clots. Nikki Battiste has the details.
Read more

South Korea forward Lee Geum-min discusses moving to the UK, her struggles at Manchester City and a second chance at Brighton.
Read more

The Taliban have announced a list of deputy ministers, failing to name any women, despite an international outcry when they presented their all-male Cabinet ministers earlier this month
Read more

Look back in laughter: ‘The Daily Show’ celebrates at...

Long before there were shouts of fake news, there was a fake news show
Read more

Postmaster General Louis DeJoy is again trying to make major changes that pose a threat to timely delivery of mail-in ballots, according to a complaint filed by a group of Democratic state attorneys general.
Read more

Cuomo family had special access to COVID-19 tests in...

New York Gov. Andrew Cuomo prioritized COVID-19 testing for his relatives, including his brother, in the early days of the pandemic, reports claim.
Read more

Since Feb. 1, 2020, the Centers for Disease Control and Prevention estimate there have been 942,431 excess deaths in the U.S.
Read more

Brad Pitt has been awarded temporary joint custody of the six children he shares with Angelina Jolie, two sources with knowledge of the case told CNN.
Read more

No Covid traces found in railway stations or trains

The Latest: India evacuates 168 people on flight from...

Cruella has arrived on Disney Plus – and the Emma Stone –starring prequel has one final secret to reveal during its end credits.
Read more

Tile Mate, Tile Slim, and Tile Sticker are three great trackers that are sure to fit almost every use case you could imagine and will last you a while with their three-year battery life.
Read more

Documents, shared in online forums appear to show records of payments made to streamers.
Read more

Landlord faces homelessness as tenants fall behind on rent...

A federal judge erupted at a Capitol riot defendant who refused to wear a mask during his hearing, telling the defendant "You don't make the rules."
Read more

Pair who tried to cut off boy’s finger in...

The teenager was targeted in Edinburgh after he reported a suspected drug dealer to police.
Read more

Cathie Wood’s flagship ETF bounced back from its worst run of losses since 2018, riding the rally in stay-at-home winners who thrived after Friday’s weaker-than-forecast jobs report.
Read more

How to Get the Most Out of Your Meditation...

The brain's default mode is set to mind-wandering. Your meditation app can bring you back into the now.
Read more

MI6 must adapt to new technology to survive, says...

Spanish authorities are investigating actions of a Ryanair passenger who reportedly exited the plane and climbed out onto the wing after growing impatient after arriving in Malaga, Spain.
Read more

UBS in Talks to Hire Colm Kelleher as Chairman...

President Biden completes his first hundred days in office with a country that is more optimistic about the coming year, according to a new ABC/News Ipsos poll.
Read more

Heated arguments spilled out into the parking lot Tuesday night after a school board in a suburban Tennessee county approved a temporary requirement for masks in elementary schools due to the Covid-19 pandemic.
Read more

Blackouts Could Darken Europe This Winter

A 15-year-old teen died Wednesday after falling overboard a cruise ship retuning to Miami from a 5-night trip to the Caribbean and Bahamas.
Read more

Italians Berrettini and Sonego cruise into Wimbledon fourth round...

Italian seventh seed Matteo Berrettini strengthened his status as a genuine Wimbledon title contender by cruising into the fourth round on Saturday with a convincing 6-4 6-4 6-4 win over Aljaz Bedene of Slovenia.
Read more

Competition at the Tokyo Olympics kicked off Wednesday morning local time with a softball game between Japan and Australia.
Read more

Spotify’s new update aims to shake you free from...

The streaming giant is rolling out an update to its homescreen user interface for mobile, featuring a prominent 'history' section.
Read more

The Navy has fired the top three leaders aboard the submarine USS Connecticut that struck an uncharted sea mountain in early October.
Read more

Doctors in Afghanistan’s crisis-hit hospitals are caring for their patients in almost impossible conditions.
Read more

Business lobbyists are increasingly optimistic that they can water down tax hikes and other measures in Democrats’ $3.5 trillion spending plan opposed by corporate America.Their confidence was boosted last week by an agreement struck between Speaker...
Read more

Sheriff Tiraspol produce one of the great Champions League shocks by beating Real Madrid at the Bernabeu.
Read more