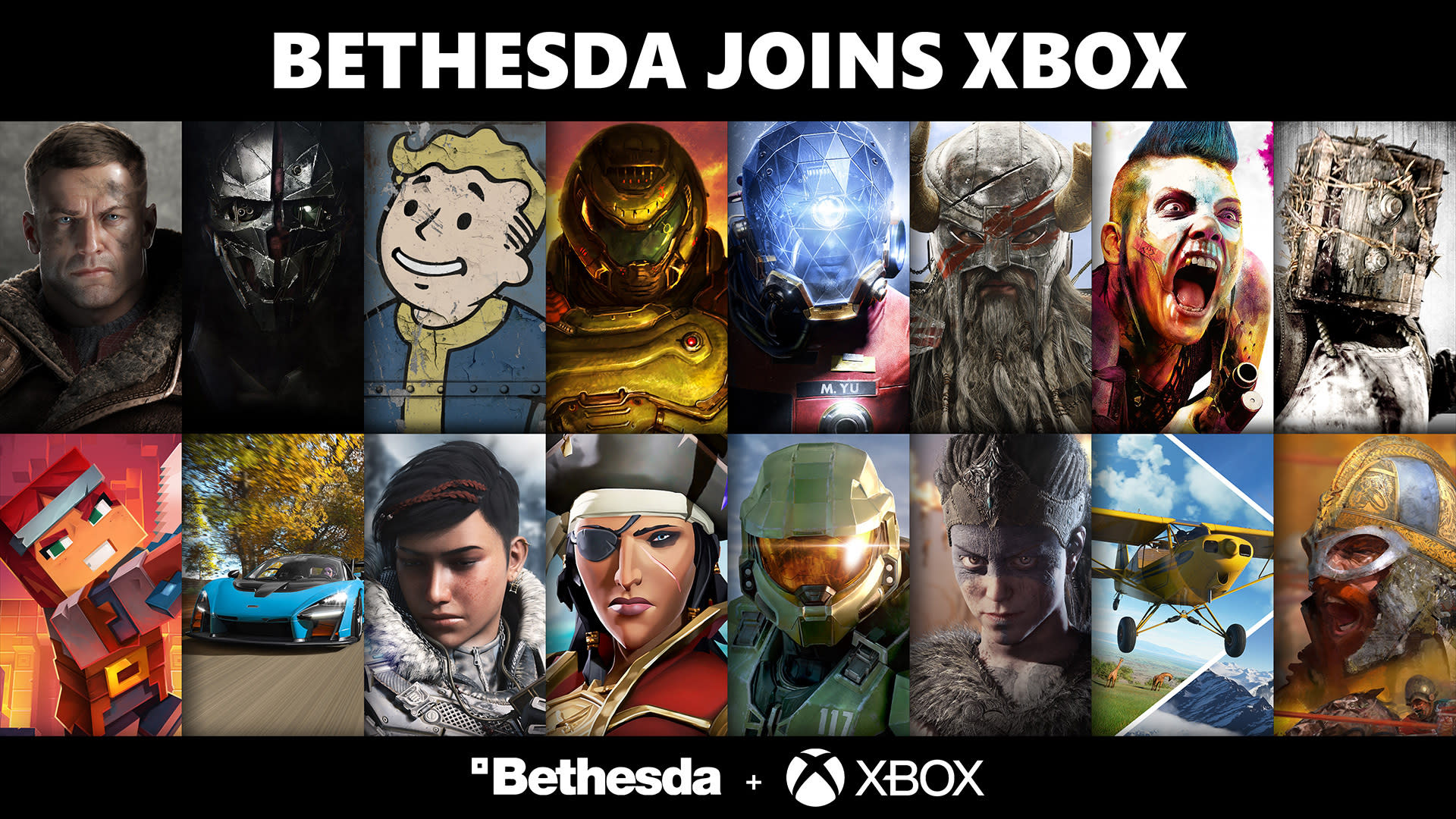 Only a few days after gaining approval

from regulators in the US and European Union, Microsoft and ZeniMax Media have made it official. The parent company of Bethesda Softworks is now part of Xbox following the completion of a $7.5 billion deal

The deal adds eight more studios to Xboxs portfolio, including id Software, Arcane and Bethesda Game Studios. It remains to be seen which games developed by those studios will be exclusive to PC and Xbox, but there definitely will be some titles that won’t make their way to PlayStation, Switch or other platforms.

“With the addition of the Bethesda creative teams, gamers should know that Xbox consoles, PC, and Game Pass will be the best place to experience new Bethesda games, including some new titles in the future that will be exclusive to Xbox and PC players,” Xbox chief Phil Spencer wrote in a blog post

When Xbox and Bethesda announced the deal, they confirmed they’d abide by previous agreements with Sony. Deathloopand GhostWire: Tokyowill still be PlayStation 5 console exclusives. Future games may be released on non-Xbox or PC platforms, but Xbox and Bethesda will decide those on a “case-by-case basis.” Currently, Bethesda is working on The Elder Scrolls VI and a new franchise called Starfield.

Spencer noted that Xbox will have more to share about what its new studios are working on later this year. As previously rumored Where is the anti-lockdown movement headed?

What is set to become of the growing anti-lockdown movement once Covid restrictions are lifted?
Read more

Galápagos tortoise found alive is from a species thought...

Genetic tests on a giant Galápagos tortoise have confirmed it is from a species once thought extinct.
Read more

Nearly two decades after an Australian woman was convicted of killing her four children, dozens of scientists are backing the claim that they may have died of natural causes
Read more

Capitol Police are investigating a suspicious vehicle in front of the Supreme Court on Tuesday morning, a day after the court convened for a new session.A notice from the Capitol Police's Twitter account shortly be...
Read more

Politicians and friends in the Czech Republic have paid tribute to Petr Kellner, the country’s richest man, who was killed in a helicopter crash in Alaska
Read more

U.S. institutional equity commissions surged 25% to $8.9 billion in 2021, the largest pool since 2016 when it reached an estimated $10.1 billion. Key drivers for the drastic increase in U.S. equity commissions were a full calendar of initial public offerings …
Read more

The president called on the GOP to join Democrats in supporting the voting and elections reform bills.
Read more

Next Africa: Ramaphosa’s Time to Act After Foe Is...

Connolly rips Wilson over ‘you lie’ during Blinken hearing

Rep. Gerry Connolly (D-Virginia) on Monday blasted Rep. Joe Wilson (R-S.C.) over his "You lie," interruption in 2009 of a speech by former President Barack Obama to Congress, arguing he had little standing to now criticiz...
Read more

The death toll at the Kentucky candle plant that was destroyed due to severe storms over the weekend may be smaller than initially believed, with officials saying more people were likely able to escape.Gov. Andy Be...
Read more

Edward's family say they will fight for him to receive a newly-approved £1.79m drug.
Read more

Fauci on GOP criticism: A lot of attacks on...

Dr. Anthony Fauci said Wednesday many of the attacks on him over the past year amounted to “attacking science," saying all his public health recommendations had been rooted in fact.
Read more

FBI Deployed to Hostage Situation at Synagogue in Texas

An armed gunmen is holding a rabbi and at least three of his congregation hostage at a synagogue in Colleyville, Texas.
Read more

The fallout from Britain's vote to leave the European Union could mean that other other nations might decide to leave as well. Fifty-two percent of Britain's voters decided to depart, sending stock markets falling. Prime Minister David Cameron plans to leave …
Read more

Kieran Reilly says he is the first person to perform three backflips and a 180-degree spin on a bike.
Read more

Problems using Google Docs&quest; It could be your adblocker

Users have been reporting issues with Google Docs and Google Slides, but there are quick fixes available.
Read more

Clary, who defended Kelly in a 2019 interview, sat down once again with "CBS Mornings" co-host Gayle King to detail some of the abuse in the relationship and how she got out of it.
Read more

U.S. Could Produce Up to 1 Billion Vaccine Doses...

President Joe Biden said Friday that the U.S. could produce up to 1 billion Covid-19 vaccine doses by as early as the end of the year.
Read more

President Biden on Friday pleaded with Americans who have not yet gotten vaccinated against COVID-19 to do so as soon as possible, citing the danger posed by the new Delta variant."Even while we're making incredibl...
Read more

A healthcare worker in a hospital has giving piano concerts in the middle of the night, with the haunting melodies moving people to tears.
Read more

Trump vs. Amazon’s Jeff Bezos, and other MoneyWatch headlines

China and Russia say they will build a lunar research station, possibly on the moon’s surface, marking the start of a new era in space cooperation between the two countries
Read more

Prosecutor says Rittenhouse was ‘drawn to the chaos’ in...

A prosecutor on Tuesday said Kyle Rittenhouse, the teenager who fatally shot two Black Lives Matter protesters last year in Kenosha, Wisc., was "drawn to the chaos" in the city.Assistant District...
Read more

Two large Chinese state banks are planning to sell offshore yuan bonds in Hong Kong as soon as next week, a move that could set in motion the launch of a new channel for mainland investors to buy offshore debt.
Read more

Oil Demand Is Back at 2019 Levels and Set to Rise, Vitol CEO Saysbloomberg.com
Read more

Southern Brave thrash Trent Rockets by seven wickets in the men's Hundred eliminator to set up a final against Birmingham Phoenix.
Read more

White House press secretary Jen Psaki said that President Biden’s support for Israel’s “right to defend itself” will “never waver,” but condemned “extremism that has inflicted violence on both communities.”
Read more

Soccer star Jessica McDonald slammed CBS' broadcast of the National Women’s Soccer League (NWSL) match between the North Carolina Courage and the OL Reign on Sunday for showing a "random Black kid" in the stands at halftime and claiming it was her son.
Read more

Former health secretary Matt Hancock says he understands why people were angry at him.
Read more

Biden calls on employers to offer paid leave for...

President Biden on Wednesday announced the nation is poised to meet his goal of administering 200 million coronavirus vaccine doses before his 100th day in office, and he urged U.S. employers to provide paid time off for workers to get their shots as part of …
Read more

A group called The Fairness Project is launching a new campaign aiming to make ballot measures accessible across the country. Kelly Hall, the executive director of the organization, joins Tanya Rivero on CBSN to discuss their goals.
Read more

The Aberdeenshire school has been closed since 2018 amid efforts to deal with contamination.
Read more

Conor Benn says he has gained the experience needed to continue striving for the same world-title success his father achieved.
Read more

Hillicon Valley — Officials on alert ahead of Election...

An Indiana man is facing federal charges in the death of a police officer outside an FBI building in Terre Haute, Ind.The ...
Read more

There were more than 4 million new COVID-19 cases reported globally in the last week, driven mostly by spikes in the Middle East and Asia
Read more

The young Miami Marlins are focused on using their surprising 2020 playoff run as steppingstone to something greater.
Read more

The unions say the relief is needed because the Education Department’s existing Public Service Loan Forgiveness program has been plagued by problems and mismanagement.
Read more

The European Union filed a lawsuit against AstraZeneca Plc, raising the stakes in the spat between the drugmaker and the bloc’s 27 governments over vaccine deliveries.
Read more

CNN Business investigating culture of how it treats women:...

In some parts of the country, it represents over 90% of cases.
Read more

Justin Trudeau Has 12 Days to Salvage His Career...

Tyson Fury and Anthony Joshua will reportedly £53m each if they fight, plus more in this week's Fight Talk.
Read more

Ollie Robinson completes his first five-wicket haul for England as Stuart Broad pulls off a fine diving catch to remove Jasprit Bumrah for 28, as India finished their first innings 278 all out,
Read more

Wayne Rooney's Derby move within 11 points of safety as they make it three straight wins to complete a double over promotion-chasing Stoke.
Read more

Virgin Galactic may sell $500m in stock after space...

The company filed to sell up to $500m (£360m) in stock the day after its founder reached the edge of space.
Read more

Congress needs to reform the Vacancies Act to keep...

The bill is an important step forward in ensuring qualified, experienced personnel serve as acting officials, and in giving businesses that interact with federal agencies greater certainty that the decisions by those officials won’t be invalidated down the li…
Read more

President Joe Biden recently held a call with Dr. Rob Califf, the former FDA commissioner, who is now under consideration to lead the agency again, according to two people familiar with the conversation.
Read more

A growing number of women crossing the forbidding jungle of the Darien Gap between Colombia and Panama on their route north are reporting sexual assaults, grabbing the attention of Panamanian lawmakers
Read more

Virginia is not California, but Democrats here can still learn a lot from Tuesday night.
Read more

Oregon Gov. Kate Brown (D) is being sued by Oregon State police officers and firefighters over the state's vaccine mandate. The ...
Read more

Q & Trey: The Legality Of Going Door-To-Door For...

On this episode, Trey discusses how the game of golf can help you tell someone’s character, how people manage and respond to their guilt, and whether it is legal to go door to door to check somebody's vaccination status.
Read more

Lorenzo Sonego defeated world number seven Russian Andrey Rublev on Saturday, continuing his dream run at the Rome Masters and becoming the first Italian semi-finalist at the event in 14 years with a come-from-behind 3-6 6-4 6-3 win.
Read more

iPhone 13 prices could get pushed up by increased...

A key Apple supplier is reportedly pushing its prices up, which means the iPhone 13 could cost more than the iPhone 12.
Read more

Las Vegas offering teachers up to $2K bonus to...

Las Vegas schools are offering full-time employees $2,000 to remain at work amid the ongoing winter surge in COVID-19 cases in the country.In a statement released Thursday, the Clark County School District Board of...
Read more

Test your F1 knowledge of the 2021 season
Read more