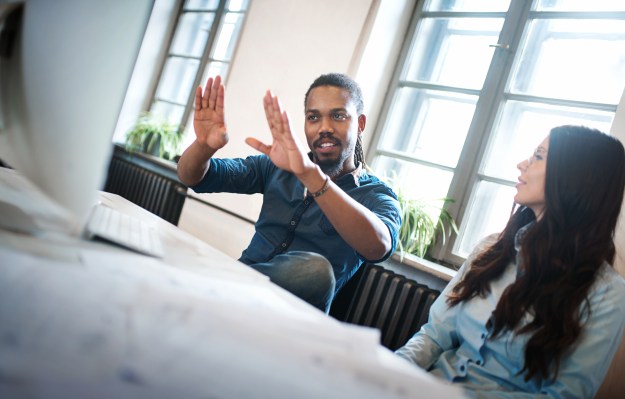 Demostack, an early stage startup that wants to make it easy for companies to build software demos, announced $17.3 million in funding today. The company also announced it was coming out of stealth.

That investment breaks down into a $13.3 million Series A led by Bessemer Venture Partners with help from GTM Fund and several individual investors. They also announced a $4 million seed from last December led by Amiti Ventures with participation from Operator Collective, Cerca Partners and a slew of individual investors. All the seed investors also participated in the A round, according to the company.

Software companies of all types face challenges in building a quality demo, one that doesn’t expose actual customer information, yet shows all of the functionality in a reasonably realistic way. It’s a problem that co-founder and CEO Jonathan Friedman experienced in his previous job and he wanted to do something about it.

“We’re building a perfect demo environment. And what that means is that it’s one that is controlled by sales or marketing. […] There is no need for [engineering] at all, and it’s customized for each prospect by default,” Friedman explained.

He said that it removes that anxiety that the demo won’t work, or that you will expose data you’re not supposed to. “Demo anxiety is real. Just having to worry about PII (personally identifiable information), and having people logging on and coming in and creating stuff within our production environment was unsustainable,” he told me.

Friedman founded Demostack to change that. They provide a full demo building tool that starts with a recording of the environment, so it looks and feels like the live product, and you can create auto customization with variables like customer name that link to the CRM tool and pull in information for you as you build the demo for a particular prospect.

It’s a solution that caught the attention of Adam Fisher, partner at lead investor Bessemer Venture Partners. “Demostack gives every software business a powerful competitive advantage, allowing them to better engage their prospective customers, doing away with old school temperamental demos,” he said in a statement.

Demostack already has 20 employees with plans to triple that number by the end of this year. He said the company is already embracing diversity among its early employees, and sees this as an important building block.

“One of the main reasons that we wanted to lean into this early is because being a diverse company is not a bonus. It’s not like, ‘Oh I’ll do this to make people happy about me’. You can’t understand how people from different walks of life see reality. Everyone sees a different slice of reality. If you can’t grasp that you will never build a company that is successful,” Friedman said.

The company launched last September and released an early version of the product in February. Today, Demostack is publicly unveiling the company, although it doesn’t expect to have the complete product ready for distribution until mid-year. Bobby Ternent and his father Gary Ternent are on trial at the Old Bailey accused of killing John Avers.
Read more

The arts institution says it "had no right to judge her views" after removing her work from its shop.
Read more

Vote for the best goal of the FA Cup...

Watch the top picks of the goals from the FA Cup second round and vote for your favourite.
Read more

Arsenal defender Hector Bellerin has joined Spanish side Real Betis on loan until the end of the season, the English Premier League club said on Tuesday.
Read more

Bloomberg Westminster: Pushing The Vote Out

Singer-actor Kris Wu has denied the accusations and said he was filing a defamation suit.
Read more

A city official in Southern California is facing criticism after she compared her refusal to wear a mask during the coronavirus pandemic with Rosa Parks's historic fight against racial segregation....
Read more

When you get a tattoo, what's being injected under your skin? While tattoos are on track to become a more than $1 billion business by 2020, the FDA says consumer complaints are also increasing. The agency recently issued a warning about the risks associated w…
Read more

Earlier this year, when California Gov. Gavin Newsom was searching for the right message to convince disengaged Democrats to vote against the effort to oust him in Tuesday's recall election, it would have been impossible to imagine a more perfect foil than co…
Read more

Liquid Web has acquired IconicWP and its founder and team will be joining the company's StellarWP business.
Read more

Why Mike Tyson Hates the Hulu Series Being Made...

The boxing legend, 54, is set to be portrayed by Trevante Rhodes in the eight-part Hulu series "Iron Mike," while Jamie Foxx will channel the pugilist in "Tyson."
Read more

Philippines journalist Maria Ressa, who won the Nobel Peace Prize on Friday with Russian journalist Dmitry Muratov, said she was stunned by the news.
Read more

The Kremlin announced on Wednesday that Russian President Vladimir Putin would not be attending the 2021 United Nations Climate Change Conference (COP26) in Glasgow in person and would instead be taking part virtually....
Read more

High jinx: New Portuguese bridge not for the faint-hearted

Breaking Down The AT&T-Discovery Merger (Audio)

Congressional district maps proposed by two special masters working for the Virginia Supreme Court would put two rising star Democrats at risk losing their seats in the U.S. House of Representatives next year, though the...
Read more

Chris Harrison: The Bachelor host leaves for good over...

Chris Harrison had fronted the hit US dating show and its spin-offs since 2002.
Read more

Last year, it was March sadness as the NCAA college basketball tournament got canceled days before it was supposed to start, because of the coronavirus
Read more

Liverpool and Manchester United in the hunt for Saul Niguez, Arsenal target Manuel Locatelli, Chelsea not giving up on Erling Braut Haaland, plus more.
Read more

Some Haitians turn to prayer after president’s assassination

‘No time for parlor games’: Buttigieg denies rivalry with...

The Transportation secretary denied any strains on his dealings with the vice president and dismissed developing narratives on a rivalry between the two.
Read more

A tiny Colorado town’s football team gets its field...

A Colorado school's football field was in such bad shape that other teams said they wouldn't play on it.
Read more

Robert Plant and Alison Krauss are back this month with a new album of covers, 14 years after their surprise hit with critics and fans, “Raising Sand.”
Read more

New home prices in China rose at a faster pace in April, data showed on Monday, despite heightened government efforts to clamp down on property speculation.
Read more

It would be a stunning loss for one of the most prominent figures in New York’s Democratic establishment.
Read more

Services between 01:00 BST and 05:30 will begin on the Central and Victoria lines on 27 November.
Read more

US begins legal appeal to get Julian Assange extradited

Lawyers for the US say a judge who blocked Julian Assange's extradition was misled by a psychiatrist.
Read more

Some sectors wants a relaxation of immigration rules but the government says firms should pay staff more.
Read more

"Kitbag" is the upcoming historical-action movie from Ridley Scott, with Vanessa Kirby set to star opposite Joaquin Phoenix.
Read more

The CEO of the North American Electric Reliability Corporation (NERC) told Congress on Wednesday that evidence shows Texas "absolutely" did not follow recommendations by the organization and federal regulators in 2011 to...
Read more

Phone.com delivers a good quality VoIP service, but prices can stack up if more advanced features are required.
Read more

Hackers accessed data from about 150,000 surveillance cameras in a breach that exposed footage from Tesla, hospitals, and police stations, ...
Read more

Nearly two million people have been urged to evacuate their homes amid heavy rainfall.
Read more

Mexico City schools that had just gone back to in-person classes will be closed again starting Monday as the sprawling capital climbs into a higher tier of coronavirus risk, education authorities said on Saturday.
Read more

2 indicted in connection with Atlanta shooting death of...

Urban Meyer apologizes for ‘stupid’ decision over video with...

Jacksonville Jaguars head coach Urban Meyer apologized Monday for what he called a "stupid" move after video surfaced showing a young woman dancing on him at a bar, ...
Read more

Prince Philip: Duke of Edinburgh’s funeral ‘has his fingerprints...

The funeral on Saturday will be a "tremendous celebration" of the duke's life, the head of the Army says.
Read more

The specially-trained canine trio have arrived in Orkney in the latest phase of an eradication project.
Read more

The iconic flag raised after the 9/11 attacks by firefighters has been found after having gone missing for years. The National September 11 Memorial & Museum will unveil it on Thursday. CBSN's Elaine Quijano has the details.
Read more

It comes after rounds of votes over changes that would have ruled out more costs for leaseholders.
Read more

One Sign That the Fed Changed Everything in Corporate...

In March of last year, the credit market seized up spectacularly and the Federal Reserve stepped in with two brand new emergency bond-buying programs known as the Corporate Credit Facilities (CCF). Months later, the CCF has arguably permanently altered the dy…
Read more

Rita Moreno apologizes for ‘dismissive’ remarks about ‘In the...

Green Bay Packers quarterback Aaron Rodgers on Wednesday sought to set the record straight about his recent toe injury, dismissing claims that he had a condition known as "COVID toe" after referencing it the day before....
Read more

A suspect wanted in a kidnapping case was taken into custody Tuesday night after leading police on a chase across the Los Angeles area, according to a report.
Read more

Kendall Jenner and boyfriend Devin Booker packed on the PDA during a rare sighting amid their Italian vacation. The model gave the NBA star a kiss on the cheek while the two shared a meal.
Read more

Japan to start releasing Fukushima water to sea in...

Great Britain's Stef Reid tells BBC Sport about playing Scrabble with prison inmates, making the world's best cookies, and her mindset ahead of competing in the Tokyo Paralympics.
Read more

Sen. Elizabeth Warren (D-Mass.) announced on Sunday that she has tested positive for COVID-19. "I regularly test for COVID & while I tested negative earlier this week, today I tested positive...
Read more

AstraZeneca scientist says COVID-19 boosters may be unnecessary for...

The creator of the AstraZeneca COVID-19 vaccine told The Telegraph in an interview published Thursday that a booster shot may not be necessary for the majority of people.Oxford University Professor Sarah Gilbert told the news outlet that she could...
Read more