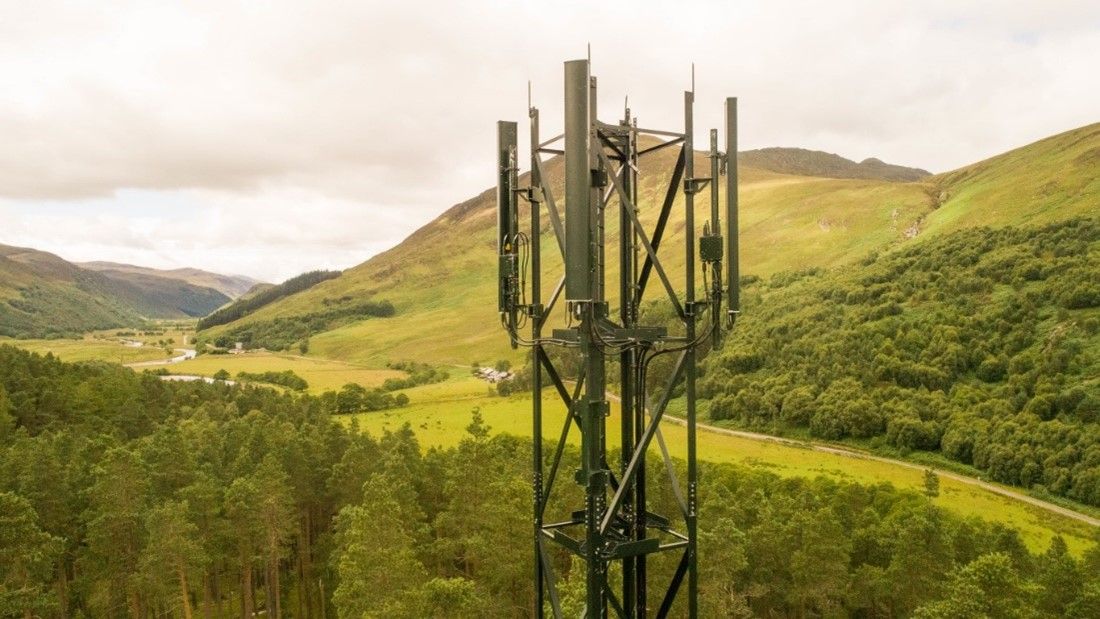 Vodafone hopes to raise 2.58 billion (£2.2bn) from the floatation of its European tower subsidiary on the Frankfurt Stock Exchange.

Vantage Towers was created in 2019 with the intention of providing infrastructure services to other operators and attracting third party investment.

Earlier this year, Vodafone and O2 agreed to add their shared towers in the UK to Vantages portfolio, bringing the total number of sites under its control to more than 82,000 across ten countries.

There has been a flood of investments in the sector by private equity firms in recent years because of the predictable, stable revenues promised by assets such as fibre networks and mobile masts. Meanwhile demand for ultrafast broadband and 5G means there is scope for growth.

This long-term view contrasts with the short-term pressures that network investment imposes on mobile operators who are in the middle of expensive network builds. An independent operator would also be able to agree deals with multiple operators, increasing revenues.

Vantage Towers floatation will be one of the biggest in Europe this year and hopes the promise of long-term revenues linked to inflation will attract investors. Naturally, Vodafone is an anchor tenant, but other customers will be tied to multi-year contracts.

According to Bloomberg, two investment firms will buy almost 1 billion worth of stock in Vantage, which is valued at up to 14.7 billion (£12.6bn). If the IPO attracts the high end of the price range and Vodafone exercises all its share options, it could generate up to 3.6 billion.

Vodafone, which is investing heavily in fibre and 5G infrastructure, will use the proceeds to reduce its debt.

Threes parent company recently agreed to sell its European mobile mast network for 10 billion to Spanish firm Cellnex, which has assembled a vast array of infrastructure assets over the past year. The Roam is Sonos’ cheapest and most portable speaker...

Today, Sonos revealed its least expensive, most portable speaker yet, the Roam. It’s a follow-up of sorts to the Move, the company’s first portable speaker which debuted in 2019. That speaker may have Bluetooth and a battery, but its relatively large size and…
Read more

Dawn Butler thrown out of Commons for PM lie...

Amazon’s Latest Win Over Labor Was Decades in the...

Unionizing the company’s Bessemer, Ala. warehouse became a rallying cry for worker advocates, but that wasn’t enough.
Read more

Incels: A new terror threat to the UK?

Is the incel belief system followed by Jake Davison, the Plymouth gunman, a terror threat to the UK?
Read more

Real Madrid are monitoring Liverpool and England defender Joe Gomez but understand he would not be available to sign in the January transfer window.
Read more

Mass drug overdose kills as many as four people...

There has been a massive drug overdose in central Georgia, with at least two dozen cases over the past 48 hours and reports still coming in. It is the latest alarming example of the overdose epidemic in the U.S. Mark Strassmann reports.
Read more

Senators from both parties acknowledge that a path forward on a comprehensive bill is unlikely, particularly with a surge of migrants at the border.
Read more

New Jersey superintendent placed on leave for refusing to...

Full transcript of “Face the Nation” on September 12,...

Matthew Selby, 19, appeared at Llandudno magistrates court on Wednesday morning charged with the murder at a holiday park.
Read more

Hong Kong: Jimmy Lai sentenced to one year for...

With Israel in crisis, supporters of Robert Wexler are making the case that their man has better chops than Tom Nides.
Read more

Afghanistan crisis: Biden says no American will be left...

The US president says the chaos in Afghanistan was unavoidable and refuses to acknowledge any mistakes.
Read more

The FBI confirmed on Tuesday that the remains found in Wyoming are those of Gabby Petito, the 22-year old girl who was reported missing earlier this month while on a trip with her boyfriend.The FBI off...
Read more

Fewer than one in four now practicing strict social...

Fewer than one in four Americans are practicing strict distancing as the number of people vaccinated increases and COVID-19 restrictions ease, ...
Read more

Liverpool bomb: Locals praised for standing together after hospital...

Figures from politics, police, football and faith communities call for unity a week after the blast.
Read more

New Mexico Gov. Michelle Lujan Grisham is set to sign legislation that will legalize recreational marijuana use and sales in the state
Read more

Trump tells followers not to give money to Karl...

Former President Donald Trump is calling on his supporters to withhold financial support from Karl Rove, the longtime Republican strategist who has spoken critically of the former president."Everyone is so tired of...
Read more

For decades, Chinese food has been under-appreciated on the...

Winner of the 2021 Asia's Best Restaurant Awards, The Chairman is considered the epitome of modern Chinese restaurants. We talk to its founder and several other renowned chefs to find out how modern Chinese cuisine is catching up on the global stage.
Read more

Belgrade’s homeless can shower, get aid in mobile bus...

Standing close together on a sunny autumn day, a group of people wait patiently by a blue bus parked beneath a bridge in Belgrade
Read more

Children and teenagers saw their body mass index (BMI) increase at almost double the rate during the pandemic, according to a Centers for Disease Control and Prevention (CDC) study that suggested some COVID-19 precautions may have contributed to higher weight…
Read more

A group of charities is calling on Boris Johnson to begin donating vaccines through Covax.
Read more

Mexico detaining twice as many Central American migrants as...

Mexico's government has ramped up the detention and deportation of Central American migrants, with deportations last month up more than 60 percent over March 2020.Figures obtained by ...
Read more

Abby Huntsman says ‘The View’ has an ‘unbearable culture’...

Former "View" co-host Abby Huntsman is speaking out about what led to her departure from the long-running ABC daytime program.
Read more

A new report by charity Ditch the Label analysed 263 million conversations between 2019 and 2021.
Read more

The best Prime Day deals on the products our...

Every month we round up our readers' favorite products — those that readers like you scooped up the most over the past 30 days. Today, we've been keeping an eye out to see if your favorite products have seen significant price drops for Prime day.
Read more

Black cemeteries are scattered throughout the United States, telling the story of the country's deep past of cemetery segregation
Read more

Storm system Ana has put tropical storm watches in place for the Carolinas. It will create a wet weekend for parts of East Coast. Meanwhile, the Plains are under another threat of violent weather. An apparent lightning strike caused a gas well to explode outs…
Read more

iQoo 7 could be the cheapest Snapdragon 888 phone...

The Vivo offshoot has confirmed that the iQoo 7 will launch in India soon, and will have a price tag of less than Rs 40,000.
Read more

Researchers believe that the area may have once been a trample ground in the Triassic period for sauropodomorphs — massive, herbivorous, long-necked dinosaurs.
Read more

Watford manager Claudio Ranieri insists his team can be proud of their performance against Tottenham, and despite losing 1-0, says the Hornets "will survive".
Read more

There really are no suitable words to describe the epic, historic cluelessness with which Democrats have blown their total control over Washington.
Read more

Politicians have been trekking to Phoenix to visit the election "audit" in Arizona. Experts said they are perpetuating a disinformation campaign.
Read more

Arlo’s first 4K security camera is soon to be discontinued, but you can still pick one up, but should you? We tested the Arlo Ultra and the Arlo Ultra 2 to find out which you should choose.
Read more

Black people in the US are subject to double the level of heat stress in cities than whites.
Read more

Miami will hold its first Grand Prix in 2022 after Formula 1 secured a 10-year deal for a race in the Florida city.
Read more

For an audience with the “King of Clay,” the current queen of clay thought it best to come prepared.
Read more

A second Republican will be joining the special committee examining the Capitol attack of Jan. 6 - but not one that GOP leaders want.Speaker Nancy Pelosi (D-Calif.) has tapped Rep. Adam Kinzinger, an Illinois centr...
Read more

The U.S. Justice Department is arguing in Washington, D.C., federal court that it should be allowed to press its antitrust investigation of National Association of Realtors (NAR) policies and practices despite an earlier, but since withdrawn, settlement.
Read more

Sen. Graham: Biden is ‘kowtowing’ to the ‘most radical...

To celebrate UK Black History Month, we're celebrating four Black figures who have made an impact on gaming and tech.
Read more

Novak Djokovic's hopes of winning a 'golden Grand Slam' are over after losing to Alexander Zverev in the Olympic tennis semi-finals.
Read more

Despite some cicada-related hiccups, Joe Biden made his first foreign trip as President this week, promising to bolster the world's response to Covid-19 and seeking to repair international ties frayed by his predecessor.
Read more

As international efforts at a cease-fire stepped up, Israel appeared to be looking to inflict intensified damage on the Islamic militant group Hamas.
Read more

It was a historic day on Wall Street on Tuesday as the Dow Jones closed above 18,000 for the first time ever. The S&P 500 ended with its 51st record close of the year. It follows news that the economy grew at its fastest pace in more than a decade in the thir…
Read more

Amazon.com Inc. is deceiving consumers by failing to clearly delineate between paid advertisements and organic search results on its online marketplace, according to...
Read more

Stocks found a footing and swinging bond markets calmed down on Wednesday, with testimony from U.S. Federal Reserve chair Jerome Powell providing investors with reassurance that the central bank has an eye on inflation but is not hastening to hike rates.
Read more

Israeli readers will no longer be able to get a copy of Sally Rooney’s latest novel "Beautiful World, Where Are You."
Read more

The Apple Watch 6 plummets to record-low price ahead...

Qualified immunity, which shields police from lawsuits and limits civil liability, is still a point of contention.
Read more

A bipartisan group of lawmakers is calling on the Biden administration to immediately evacuate thousands of Afghans who have assisted the United States, saying in a letter Friday that those "Afghan friends and allies are at greater risk than ever before" as t…
Read more

Semiconductor manufacturer GlobalFoundries on Monday sued International Business Machines Corp (IBM.N), asking a judge to rule that it did not violate a contract with the U.S. company which claims it is owed $2.5 billion in damages.
Read more

Fresh leak hints at how AMD vs Nvidia next-gen...

Who might win the next-gen GPU war? And what basis will that war be fought on, maybe more to the point...
Read more

Concerns rising inside White House over surge in violent...

A nationwide surge in violent crime has emerged as a growing area of concern inside the White House, where President Joe Biden and his aides have listened with alarm as local authorities warn a brutal summer of killing lies ahead.
Read more