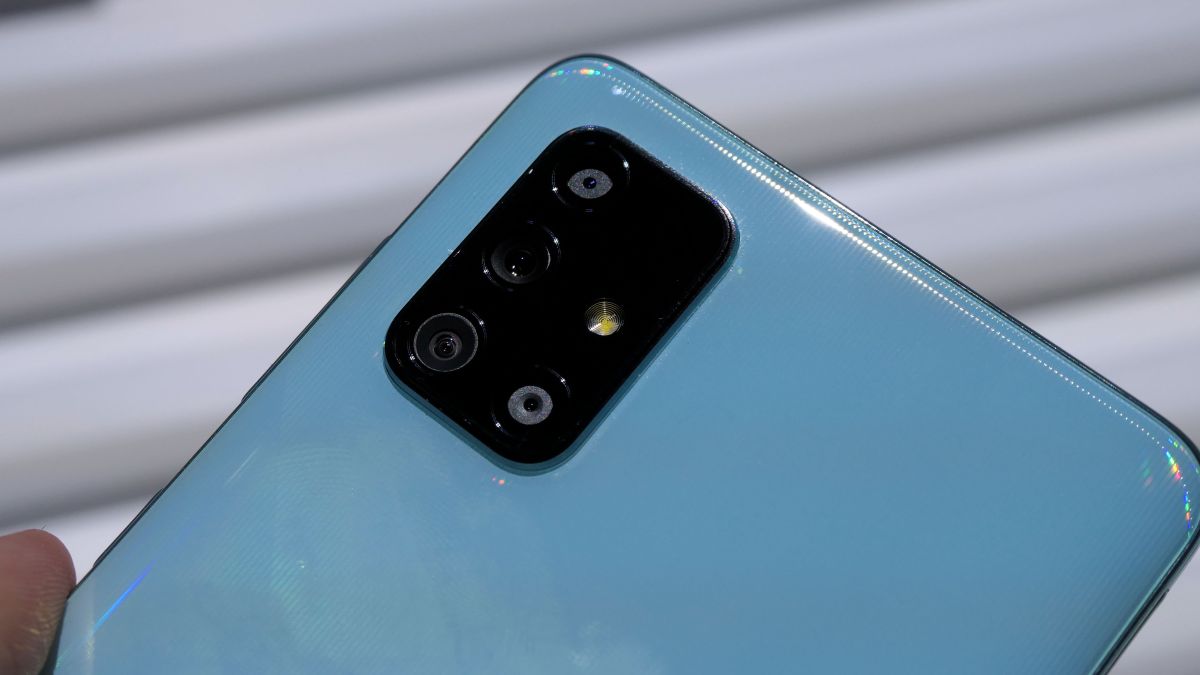 The upcoming Samsung Galaxy A72 may inherit a game-changing camera feature thats only been seen in the brands flagship phones like the Samsung S21: Space Zoom, reaching up to 30x digital magnification.

, who shared the information via a series of tweets. Most of these echo the specs weve seen rumored

previously, but this is the first weve heard that one of the Samsung Galaxy S21 ranges best features is trickling down to the brands mid-range phones.

Also first Galaxy A series phone to get the Space Zoom feature up to 30x pic.twitter.com/o6vUgCJKivMarch 7, 2021

Space Zoom, a feature introduced in the Samsung Galaxy S20 line, manages 30x digital magnification, and its much crisper at that maximum in the S21 range. Trickling this feature down to the Galaxy A72 is a great boon for folks who dont want to pay flagship phone prices for Samsung quality but its also very impressive given its predecessor, the Samsung Galaxy A71, didnt have a telephoto lens at all (just a 5MP depth sensor).

Weve heard plenty of rumors about the Samsung Galaxy A72 that paint a pretty clear picture of what kind of phone were likely to get.

The aforementioned specs leaks, along with this one, suggest a 4G-only phone powered by a Snapdragon 720G chipset, 6GB or 8GB of RAM, and 128GB or 256GB of storage, though thats expandable via microSD (up to 1TB, the new leak suggests). Leaks suggest it will have a 6.7-inch Full HD Plus (2400 x 1080) AMOLED display with in-screen fingerprint scanner and 90Hz refresh rate.

With a 5,000mAh battery, Android 11, and a 3.5mm headphone jack, were expecting a solid mid-range device much like its predecessor.

Its the cameras that could differentiate the A72 from last years Samsung A71: while wed heard about a 32MP selfie, 64MP main shooter, 12MP ultra-wide, and 2MP macro shooter, wed only heard about an 8MP camera that could be telephoto. The new leak suggests that latter shooter will indeed be an 8MP telephoto with 3x optical zoom.

While thats below the 64MP 3x optical telephoto lens on the Samsung Galaxy S21 which could mean the A72s 8MP lens will take blurrier photos at maximum magnification Space Zoom is still a neat feature that broadens the mid-range phones photographic capabilities. Crystal Hefner says she has ‘removed everything fake’ from her body

China offers glimpse of Tibetan life without the Dalai...

An Iowa man was arrested Tuesday after authorities discovered a rifle with a laser sight in his hotel room overlooking Lake Michigan during the Fourth of July weekend, with police saying the hotel employee who spotted the...
Read more

Consensus has been breaking out on a court that is supposed to be "too partisan and unbalanced to trust."
Read more

It's Monday, welcome to Overnight Defense & National Security, your nightly guide to the latest developments at the Pentagon, on Capitol Hill and beyond. Subscribe here: ...
Read more

Classic games like chess and Sudoku are now easier...

Apple Arcade has added loads of classic games to its roster like chess, solitaire, Sudoku, backgammon and more.
Read more

The Samsung Galaxy S21 and Realme GT are both relatively affordable flagships, so which one should you choose?
Read more

The Trump administration is defending the use of private email accounts by members of the president's inner circle. CBS News has confirmed at least five current and former White House officials have used private email for government business. Major Garrett re…
Read more

US bids ‘do svidaniya’ to Russian staff at Moscow...

The United States has laid off nearly 200 local staff working for its diplomatic missions in Russia ahead of an Aug. 1 deadline set by the Kremlin for their dismissal
Read more

We review LeafLogix POS, a first-class point of sale system designed for the cannabis industry, developed to help you meet and beat your sales targets.
Read more

Crypto and Sports: A Marriage Made in … Well,...

Digital currencies look to football, basketball, and wrestling fans to expand their investor base.
Read more

‘I want Afghan women to be free to wear...

Fashion icon Halima Aden and Afghan tutor Aliya Kazimy write to each other about the importance of choice.
Read more

Texas death believed to be first in US linked...

An unvaccinated man with underlying health conditions died in Texas on Monday after testing positive for the COVID-19 omicron variant, officials in Houston said, marking what is believed to be the first death linked...
Read more

Evacuations, flooding continues a week after Harvey made landfall...

Though Harvey has since moved on, its devastation is still causing problems in Texas towns like Beaumont, where residents are being evacuated following the failure of the city's water pumps. Anna Werner reports from Beaumont, and Omar Villafranca reports from…
Read more

Woods Said to Be ‘Crazy Good’ as He Prepares...

Orlando, Fla. (AP) -- The father of Justin Thomas got the first look at Tiger Woods playing a round of golf since his car crash 10 months ago and saw more than he expected.
Read more

Out of 144 encounters with mysterious aircraft, 143 are literally unidentifiable, according to a newly released report to Congress.
Read more

Wales might be without some familiar faces against Canada but there will be some friendly faces once more in the Principality Stadium stands.
Read more

Authorities search for brother of boy found dead near...

Las Vegas police searched Saturday for the father and 11-year-old brother of a boy whose body was found Friday on a mountain trail.
Read more

"48 Hours" Live to Tell: The lone survivor of a serial killer on a multi-state killing spree tells her story, in her words. Watch Saturday, Sept. 2 at 10 p.m. ET/PT on CBS.
Read more

Hearts’ match at Linlithgow goes ahead after Covid-19 cancels...

New York state lawmakers passed a bill on Thursday that will make it possible for people who identify as neither male nor female to have a gender-neutral "X" to designate their gender on birth certificates and drive...
Read more

Italy midfielder Manuel Locatelli arrives at Juventus to undergo a medical ahead of signing for the Serie A club.
Read more

Japan to extend virus emergency until end of month

President Trump is slamming Sen. Al Franken after Franken was accused of sexual misconduct, but the president, who has also faced similar accusations of his own, has been silent on Republican Alabama Senate candidate Roy Moore. Senior political correspondent…
Read more

Russia, Iran were top two sources of disinfo on...

Russia and Iran were the top purveyors of disinformation on Facebook over the past 4 years, and the U.S. public was the top target, says a new Facebook report.
Read more

Green Party to file for recount in Wisconsin

The Green Party announced plans Friday to file for recount in Wisconsin over concerns about hacked systems.
Read more

Reigning Women's Super League champions Chelsea move to within a point of leaders Arsenal with a big win at Manchester City.
Read more

Coda: ‘Deafness is not a costume you can put...

The maker of the film Coda says being authentic to the story of child with deaf parents was vital.
Read more

As Covid trends down, Fauci warns not to ‘declare...

“If you look at the history of the surges and the diminutions in cases over a period of time, they can bounce back,” the National Institute of Allergy and Infectious Diseases director said.
Read more

Workers, volunteers and members of the National Guard were spreading across tornado-damaged areas of Kentucky to assist with recovery tasks large and small
Read more

Gmail appears to be suffering problems, with users struggling to log in
Read more

How to watch The Falcon and the Winter Soldier...

As Sam and Bucky form an awkward alliance, here's how to watch The Falcon and the Winter Soldier and stream new episodes online thanks to Disney Plus.
Read more

Save on PS5, Xbox and Nintendo Switch game deals...

Amazon is offering 3 PS5, Xbox or Nintendo Switch game deals for the price of 2 this weekend.
Read more

COVAX program leader hopes to have vaccines to over...

The co-head of the Coalition for Epidemic Preparedness Innovations (COVAX) said on Sunday that the World Health Organization (WHO)-affiliated program hopes to have COVID-19 vaccines to over 100 countries in the next...
Read more

New Zealand has become the first country to pass laws requiring banks, insurers and investment managers to report the impacts of climate change on their business, officials said on Thursday.
Read more

The Acer ENDURO N3 is designed for those that work outdoors but don’t want to worry about a rain shower coming along and wrecking their computer.
Read more

Rallies take place around the world to demand solutions to the climate crisis. Follow for live news updates.
Read more

Expats struggle to get vaccines in Kuwait, citizens come...

Many foreigners who power the economy in the tiny, oil-rich sheikhdom of Kuwait are struggling to get coronavirus vaccines
Read more

A woman who was at the festival told reporters that said didn't know she was buying a "death ticket".
Read more

Mark Ridley-Thomas also moved $100,000 from a campaign committee through USC and eventually into the account of a nonprofit that employed his son, the indictment alleges.
Read more

Here are a few ways to articulate your message with your strategy in mind.
Read more

Prince Philip vs Philip of ‘The Crown’: Fact and...

Britain's Prince Philip stood loyally behind Queen Elizabeth II, as his character does on Netflix's “The Crown.”
Read more

Italy will require all workers to have a valid Covid passport, as the government led by Prime Minister Mario Draghi moves to set...
Read more

Chancellor Angela Merkels Christian Democrats won the final electoral test before the vote to choose her successor in September, comfortably seeing off a...
Read more

Last month he claimed only "crack-smoking, demon-possessed leftists" believe Biden beat Trump, and in July he threatened to remove anyone wearing a face mask.
Read more

Oppo A53 price in India slashed, now starts at...

International flights to and from the UK fell to just 400,000 this year, says analytics firm Cirium.
Read more

How Many Children Does Cristiano Ronaldo Have?

Legendary soccer player Cristiano Ronaldo has returned to the English team Manchester United F.C. for the current season, bringing his children with him.
Read more

Happy Friday — health-care deals reporter Michelle F. Davis here! Today in Bloomberg Deals we are looking at another corporate breakup — of Johnson & Johnson — as well as Labcorp’s talks to merge part of its business with Syneos and a suite of General Mills d…
Read more

Owen Diaz was hired as an elevator operator at Tesla's factory in Fremont.
Read more

McDonald's announced Thursday that over the next several months it will be boosting pay for employees at company-owned restaurants, which account for approximately 650 of its nearly 14,000 U.S. locations....
Read more

Otto Warmbier’s cause of death revealed

The coroner's report for Otto Warmbier, the 22-year-old who died in Cincinnati in June less than a week after his return to the U.S. from detention in North Korea, lists a brain-damaging oxygen deprivation through "an unknown insult more than a year prior to …
Read more

Greenwood: One of the worst race massacres in American...

Your Evening Briefing: Tesla to Open in China’s Controversial...

Brandon Flowers on new Killers album inspired by his...

Will Smith almost not cast in Independence Day because...

Scott Pelley: The impact of terrorism on the human...

CBS News anchor Scott Pelley reflects on how terrorism has affected its victims and the choices we make in dealing with these dramatic, life-changing events.
Read more

Pupils and their parents are being targeted in Kirklees after an increase in coronavirus cases.
Read more