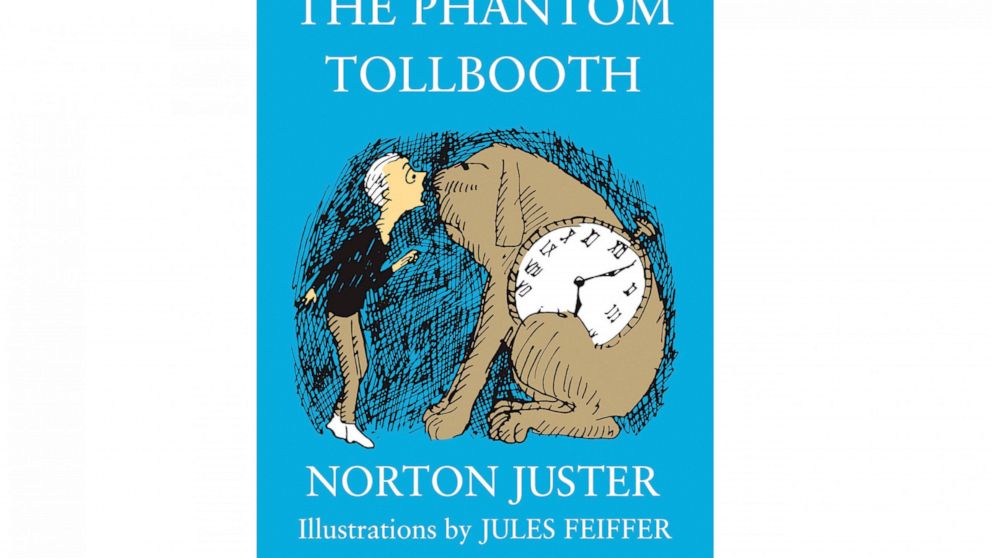 NEW YORK — Norton Juster, the celebrated children’s author who fashioned a world of his own in the classic The Phantom Tollbooth and went on to write such favorites as The Dot and the Line and Stark Naked, has died at 91.

Juster’s death was confirmed Tuesday by a spokesperson for Random House Children’s Books, who did not immediately provide details. Juster’s friend and fellow author Mo Willems tweeted Tuesday that Juster ran out of stories and died peacefully the night before.

Norton’s greatest work was himself: a tapestry of delightful tales,” Willems wrote.

As Juster wrote in the introduction to a reissue of Phantom Tollbooth, he first thought of the book when he was in his late 20s and working at an architectural firm in New York City. He found himself wondering, the way a child might, about how people relate to the world around them, and eventually turned it into a story.

Published in 1961, The Phantom Tollbooth followed the adventures of young Milo through the Kingdom of Wisdom, a land extending from The Foothills of Confusion to The Valley of Sound. Drawings were provided by his roommate at the time, Jules Feiffer, who would later collaborate with Juster on The Odious Ogre, published in 2010. Eric Carle of The Hungry Caterpillar fame illustrated Juster’s Otter Nonsense, which came out in 1982. What to expect at Fox Nation’s ‘The MisEducation of America’: Live Summit in the heart of the education debate

Dollar retreats from highs as focus turns to payrolls...

The dollar eased from last week's peaks on Monday as encouraging trial results for a COVID-19 pill supported risk appetite, but investors remained cautious ahead of central bank meetings in Australia and New Zealand as well as U.S. labour data this week.
Read more

No ‘blank slate’ jurors in county shaken by Arbery...

Biden to release his first wave of judicial nominees

After four years of Trump and Republicans shaping the courts, Democrats now get their turn.
Read more

Black Tulsa never really recovered from the devastation that took place 100 years ago, when nearly every structure in Greenwood, the fabled Black Wall Street, was flattened and as many as 300 people were killed
Read more

The death of George Floyd in Minneapolis last year has led some cities to reexamine their policing methods and look for alternatives to law enforcement. In San Francisco, Street Crisis Response teams have been assigned to handle nonviolent 911 calls that invo…
Read more

Exxon Mobil Corp (XOM.N) and the United Steelworkers union (USW) hope to break an increasingly bitter dispute over a Texas refinery contract next week by taking a different approach of sending one negotiator each to contract talks instead of a whole team, com…
Read more

Manchester City secure a 10th WSL win in a row as they defeat bottom side Bristol City at Twerton Park.
Read more

The epidemic within the pandemic

Overdose deaths in the US rose by 30% last year and experts say the pandemic played a big role.
Read more

Media consulting firm Ormax Media has released the largest audience research to size the OTT universe in India, titled The Ormax OTT Audience Report 2021. The research was based on a sample size of 12,000 across urban and rural India.
Read more

For each job created in the North, three are created in London and the South East, a report says.
Read more

Maryland Gov. Larry Hogan (R) said on Sunday that his administration is getting "mixed messagings" from the Biden White House when it comes to COVID-19 booster shots."I mean we're getting some mi...
Read more

Congress is up against the clock on key Biden...

Congress has just two weeks to ramp up negotiations on a number of key Biden administration agenda items before the end of the current work period threatens to halt any meaningful progress.
Read more

A South Carolina restauranteur moonlights as an auto mechanic for families in need.
Read more

The rise in number of mucormycosis cases in India has alarmed experts.
Read more

Everton manager Carlo Ancelotti admits his side's home form is "not good enough" with the Toffees five points adrift of the top four after their defeat by Burnley.
Read more

Otto Porter Jr shines on a rare start, helping the Golden State Warriors reclaim top spot in the Western Conference with a 116-107 win over the Phoenix Suns.
Read more

Number of children traveling alone at border eases in...

The number of unaccompanied children encountered on the U.S. border with Mexico in April eased from an all-time high a month earlier, while more adults are coming without families
Read more

More than 1.5 million people in Wales have had a booster, giving hope that lockdowns may be over.
Read more

Austin, Texas, police are now asking the public to use 311 instead of 911 to report non-emergencies, authorities said.
Read more

A Hong Kong activist dubbed "Captain America 2.0" for wielding the superhero's shield at pro-democracy protests was jailed for nearly six years on Thursday under a national security law, after a court ruled he promoted independence from China.
Read more

The US Capitol Police Board announced Thursday the selection of Tom Manger as chief of the United States Capitol Police following a nationwide recruitment effort.
Read more

The group of 26 Republicans wants information about who remains in Afghanistan after the frenzied evacuation effort at the end of August.
Read more

Kenya’s Mike Sonko: The rise and fall of Nairobi’s...

Mike Sonko was elected governor of Kenya's capital despite a criminal past - and now faces more legal woes.
Read more

Biden says "America will be the arsenal of vaccines"; Mount Recyclemore sculpture to appear at G7
Read more

Newscast’s take on the No 10 Christmas party fallout

Laura Kuenssberg, Adam Fleming and Chris Mason look at the Christmas party row and what it means for the PM.
Read more

Prince Harry discusses his struggle with mental health after...

Prince Harry opened up about the mental health struggles brought on by the death of his mother, Princess Diana, in a new series with Oprah. Nikki Battiste has the details.
Read more

House Republicans are not satisfied with the Biden administration’s stance against the Chinese government when it comes to making sure there is a thorough investigation of the coronavirus pandemic.
Read more

Chicago Mayor Lori Lightfoot insisted Sunday her team is doing everything they can to reach a deal with the city’s teacher’s union so that children can return to classrooms Monday.
Read more

Biden sister has book deal, set to publish in...

Valerie Biden Owens, the sister of President Biden and one of his closest political advisers, is set to publish a memoir next April following a book deal with Celadon Books.The publisher confirme...
Read more

The suspected gang-related shooting resulted in one injury to a person "escaping the gunfire through a window."
Read more

G7 Hands a Victory to China by Doing Little...

What’s next for 74 million of the former president's supporters? The post Trump Voters After Trump appeared first on The American Conservative.
Read more

YouTube has taken down more than 30,000 videos containing misinformation about the coronavirus vaccine since October, a company spokesperson told The Hill Thursday.The videos "included claims about COVID-19 vaccina...
Read more

Laura Ingraham: How the left is using fear to...

America is home to stunning innovation and incredible success stories, but what makes America a global powerhouse is its work ethic, and Laura Ingraham warned Thursday that it's all at risk "by a movement that seeks to discourage personal independence and enc…
Read more

The U.K.'s latest surge in coronavirus infections gathered pace Thursday with new confirmed cases rising above 10,000 for the first time in nearly four months as a result of the spread of the more contagious delta variant.
Read more

The Senate has dodged a U.S. debt disaster by approving legislation to lift the federal limit on new borrowing by nearly a half-trillion dollars
Read more

Toyota is reporting a record 897.8 billion yen, or $8.2 billion, profit for the fiscal first quarter, underlining the Japanese automaker’s resilience even amid the coronavirus pandemic
Read more

Meet the 17-year-old swimmer and TikTok star who just...

Pagonis, who at just 17 is a newly minted gold medalist, just made major waves at her very first Paralympic Games. With sweetly funny TikToks, athletic prowess and irresistible positivity, she's becoming one of her sport's brightest stars.
Read more

The score between the Memphis Grizzlies and Oklahoma City Thunder on Thursday night was one basketball fans usually see between NCAA Division I schools and Division III schools or even at the high school level – but rarely ever in the pros.
Read more

Get a super smart TV with huge savings on...

Amazon is dropping the price of its Fire TV-equipped television sets for Black Friday.
Read more

"NCIS" Season 18 ended with a shock for fans, as Ellie Bishop seemed to leave the team to go undercover. Here's what we know about Emily Wickersham potentially leaving the cast.
Read more

Disney’s ‘Encanto’ Holds on to Top Spot in Domestic...

Bill Gates and Melinda French Gates are discussing changes to the structure of their foundation to add more governance and independence, the Wall Street Journal reported on Thursday, citing people familiar with the matter.
Read more

Spectators not allowed at US Open tennis qualifying rounds

Spectators will not be allowed at the U.S. Open tennis qualifying rounds due to the coronavirus.The U.S. Tennis Association (USTA) announced the decision on Thursday, stating no fans will be allo...
Read more

Jeep is selling Wranglers with the steering wheel on...

The 2021 Jeep Wrangler is available in a right-hand drive version targeted at rural mail carriers. It previously made such a model from 2011 to 2018.
Read more

Shot and a beer: State offers free brews to...

A vaccination card will be the ticket for a free beer in the Garden State this month as Gov. Phil Murphy works to increase vaccination numbers.
Read more

State officials have destroyed the first Asian giant hornet nest of the season, which was located near the town of Blaine along the Canadian border
Read more

Congress and multiple presidents have failed to correct the emotional decisions made after 9/11.
Read more

PS5 restocks have been particularly rare over the past two weeks, with the last drop taking place at the beginning of October. Here is the latest information.
Read more

The school board in Falmouth, Maine voted unanimously this week to retire the Falmouth High School mascot and nickname, the Yachtsmen, over concerns that the imagery was not inclusive....
Read more

Our obsession with rights has distracted us from our duties and the common good. The post Rights Gone Wrong appeared first on The American Conservative.
Read more

US general admits drone strike near Afghan airport that...

At least seven children were killed in the strike.
Read more

Netflix is expected to soon list its merchandise based on 'The Witcher' and 'Stranger Things', two original series which are very popular across different markets.
Read more

The Putin critic has been diagnosed with spinal hernias and his health is worsening, a lawyer says.
Read more

North Korea's leader should pay damages after people were lured to live there, a Japanese court hears.
Read more

Should you cancel Netflix in 2021?