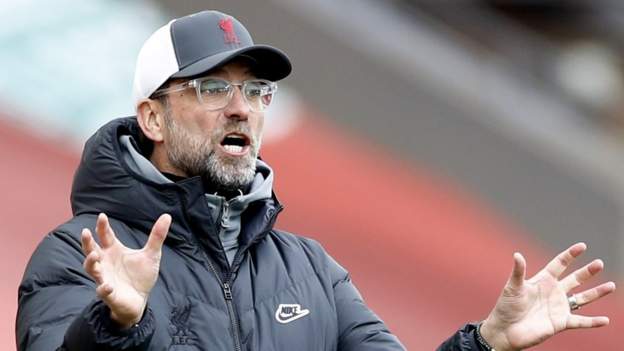 Liverpool manager Jurgen Klopp says he is not “available” to succeed Joachim Low as manager of his native Germany.

“Am I available for the job after the summer? No,” said Klopp.

“Someone else will do the job and, with the number of good German managers, I am sure the German FA will find a good solution.”

Klopp, 53, was appointed Liverpool manager in October 2015 and has led the club to victory in the Champions League in 2019 and to the 2019-20 Premier League title.

The latter was the Anfield club’s first top-flight title since 1990 but they have struggled this season and are eighth in the Premier League – seven points from a top-four spot.

Klopp said: “I will not be available as a potential coach for Germany. I have three years left at Liverpool don’t I?

“It’s simple. You sign a contract and you stick to that contract. I stuck to contracts at both Mainz and Dortmund.”

Klopp was speaking before the second leg of Liverpool’s last-16 Champions League tie against RB Leipzig on Wednesday (kick-off 20:00 GMT).

The Reds hold a 2-0 advantage for the home leg, which will be played at Puskas Arena in Budapest because of Covid-19 restrictions. The tradition traces back to the 1700s. These women...

Many African cultures in the United States have been fighting to keep their traditions and unique way of life alive, and now, an online retail outlet is helping the Gullah community in Charleston, South Carolina, use tech to reach a wider audience.
Read more

After nearly a year of closed borders, the European Union proposes opening up to fully vaccinated global travelers, a move that should help revive tourism industry fortunes.
Read more

Is shared hosting really any good?

Could shared hosting be the right choice for your business? Check out our guide to what it is and if it's good for your online portfolio.
Read more

The Antiques Roadshow team value the Scottish Cup, discuss the slight damage that "man-handling" footballers have done, and the history of Andrew Watson, the first black international footballer.
Read more

A video shop owner travelled from Liverpool to Dundee to pick up the massive haul from a collector.
Read more

Aiden Leos was killed in an alleged road rage incident while his mother was driving him to school.
Read more

Father of slain Marine speaks out on ‘chaotic’ situation...

The father of Lance Cpl. Kareem Nikoui told "Tucker Carlson Today" he believes the situation on the ground in Afghanistan is "chaotic," but the support he received in the wake of his son's death has been "incredible."
Read more

Travis Scott says he was unaware of deaths until...

Texas anticipates an unexpected budget surplus as tax-collections rebound along with the nation’s economy, causing it to boost revenue forecasts for the next two years.
Read more

The National Restaurant Association on Monday urged Congress to provide additional federal aid to restaurants that are struggling to survive a downturn driven by the omicron variant surge. In a letter to congressional leaders, the...
Read more

A Tory MP says he wants the courts to adjudicate on his potential suspension from Parliament as there has "not been a proper process here".
Read more

Antonio Conte: Tottenham players showed me they have heart,...

Efforts to locate Brian Laundrie, who faces a federal warrant for arrest, continue over the weekend in the wilderness of Florida's Carlton Reserve.
Read more

"I don't think government has any role for sex education in our schools at all," Elder said.
Read more

The CBS News-New York Times Battleground Tracker shows that Republicans are on the verge of winning the Senate with 51 seats. Iowa, Colorado and Georgia could be the deciding states. Norah O'Donnell reports.
Read more

More border rules ease in Australia ahead of Christmas...

The Australian state of Queensland opened its borders to all vaccinated domestic travelers on Monday for the first time in nearly five months, as Australians gear up for quarantine-free holiday travel -- even as clusters of the Omicron variant grow.
Read more

Ireland has long been the land of fairies and fairytales. It's also the home of Halloween. Ian lee ventures deep into the countryside to find its origins. Ian Lee reports.
Read more

Investors Peter Thiel and Cathie Wood are among those to have snapped up shares in Mynaric AG as part of the German laser communication firm’s $66 million U.S. listing, according to people familiar with the matter.
Read more

California, NYC to require employees to get COVID-19 vaccine

A growing community of writers and poets is trying to turn social media into a force for positive change. Yung Pueblo and Lalah Delia are two authors who are helping millions of followers see light through dark times with inspirational posts and tools for sel…
Read more

Kendall Jenner is taking legal steps to protect herself from an alleged stalker who trespassed on her property.
Read more

Asian stocks mixed ahead of US inflation data

Asian stocks are mixed ahead of U.S. inflation data offering a glimpse at how the world’s largest economy is recovering
Read more

Police in St. Petersburg, Fla., are investigating antisemitic graffiti discovered at the Florida Holocaust Museum on Thursday as a possible hate crime.The museum reported that swastikas and ot...
Read more

Former President Trump has fallen off Forbes list of America's richest people.Trump's fortune dropped to $2.5 bill, according to the ...
Read more

A San Diego-area school district voted Tuesday night to fire a head basketball coach after tortillas were hurled at a team from a mostly Latino high school. The Coronado Unified School Board voted 5-0 in a closed session to release JD Laaperi of Coronado High…
Read more

Biden pitched a bold climate vision. He may be...

Climate hawks are starting to worry that their issue is getting thrown under a fossil-fueled bus.
Read more

What does holiday spending surge say about 2018?

Mozambique Palma attack: ‘I had to pay a bribe...

Aid agencies have been barred from parts of Mozambique, leading to fears of a humanitarian emergency.
Read more

Judge rejects most claims over clearing of protesters from...

She tossed allegations that Trump, Barr and other federal officials violated demonstrators' civil rights when they were forced from Lafayette Square, near the White House.
Read more

Dune on HBO Max gets a slightly earlier release...

"Lupin" season two has finally landed on Netflix after months of waiting and fans want to know everything they possibly can about the French thriller.
Read more

If Asians Want Power, We Need to Learn to...

Many AAPIs have been taught that if we keep our heads down and stay silent, one day we’ll belong in America. But I only began to fit in here when I started speaking out.
Read more

The One and Only Ivan: How we brought the...

MPC's animation director and VFX supervisor explain how they made the film's effects.
Read more

The Drought Is Making the Klamath River’s Baby Salmon...

Dry conditions are worsening a warm-water disease that’s sweeping through juvenile fish. Their deaths will create a future crisis for both fish and human populations.
Read more

More than a year after coronavirus shutdowns sent “the city that never sleeps” into a fitful slumber, New York could soon be wide awake again
Read more

We have a good idea of all the shades to expect the Samsung Galaxy S22 range in. Here's what we've heard so far.
Read more

A Greek health minister announced on Wednesday that commercial venues will not be permitted to have music at New Year's celebrations amid a steep spike in COVID-19 infections due to the omicron variant....
Read more

Collette Divitto was bullied in high school and had trouble finding a job after college. But one thing has always made her happy: baking. Now, it's her business.
Read more

As many as eight million pets could flood animal shelters when the U.S. Centers for Disease Control and Prevention’s ban on evictions ends Oct. 3.
Read more

Austria in Talks About 1 Mln Sputnik Doses From...

Austria is in talks about purchasing as many as 1 million doses of Russia’s Sputnik V vaccine with first deliveries as early as next month, the APA newswire reported.
Read more

Transfer window: Who will be the big signings, who...

Who could be on the move this summer? Who has the cash? Will a star of the Euros come to the Premier League? And how is the coronavirus pandemic affecting things?
Read more

The Biden administration and congressional Democrats are working together to dismantle the U.S. oil and gas sector, making it harder to run current energy operations and banning new drilling and pipelines.
Read more

Elon Musk taunts Sanders over demand for wealthy to...

Elon Musk started a war of words with Sen. Bernie Sanders (I-Vt.) on Twitter on Sunday after the senator reiterated his stance that "the extremely wealth...
Read more

Disrupted preparations are a factor in a low-scoring start to the Africa Cup of Nations, according to former manager Claude Le Roy.
Read more

Rep. Chip Roy tells GOP to vote no on...

Texas Republican Rep. Chip Roy has urged his fellow GOP colleagues to vote no on the National Defense Authorization Act (NDAA) unless a provision that would open the draft to women is dissolved.
Read more

The clocks go back this Sunday in the UK, and to mark the time change TechRadar is launching a week-long look at sleep.
Read more

The country has fared better than many nations but is seeing more infections than ever before.
Read more

Delegates at the 30th International Convention, with representatives from all 500 Teamsters local unions, will vote Thursday on a new resolution to build worker power at Amazon.
Read more

The Best Multi-Tools for Any Task

Swiss Army knife or Leatherman? Choosing one of these tiny gadgets can be confusing. These are our favorites.
Read more

US Quidditch and Major League Quidditch want to "distance themselves" from JK Rowling's views.
Read more

Astronaut Mike Massimino answers the internet's burning questions about the far reaches of space. How do astronauts get leverage when screwing things in? After a long space flight, where does the poo go? Does NASA let astronauts get acclimated to space on the…
Read more

An Asian-American Sociologist Talks About ‘The Bamboo Ceiling’

Part of the problem is being perceived as “forever foreign,” says Margaret M. Chin
Read more

Afghanistan's capital was thrown into chaos Wednesday by one of its worst terror attacks in years. A huge suicide car bomb killed at least 80 people and injured hundreds more. The explosion went off just outside an area known for its intense security near the…
Read more

It's four years since she became the first ever unsigned winner of the BBC's annual Sound Of poll.
Read more

Francisco Lindor hit a two-run homer in the ninth inning and the New York Mets, after blowing a nine-run lead, extended their winning streak to six by beating the Washington Nationals 11-9 Saturday to open a split doubleheader on Saturday.
Read more

Delta variant​ could cause next COVID wave: “This virus...

Relative of mother stuck in Afghanistan describes country as...

After a failed evacuation attempt during the double suicide bombing last week, an Afghan mother and her five children remain stuck inside Afghanistan with little direction from the State Department on when or how they will leave.
Read more

Review: An Ohio hospital reveals all the ills of health care