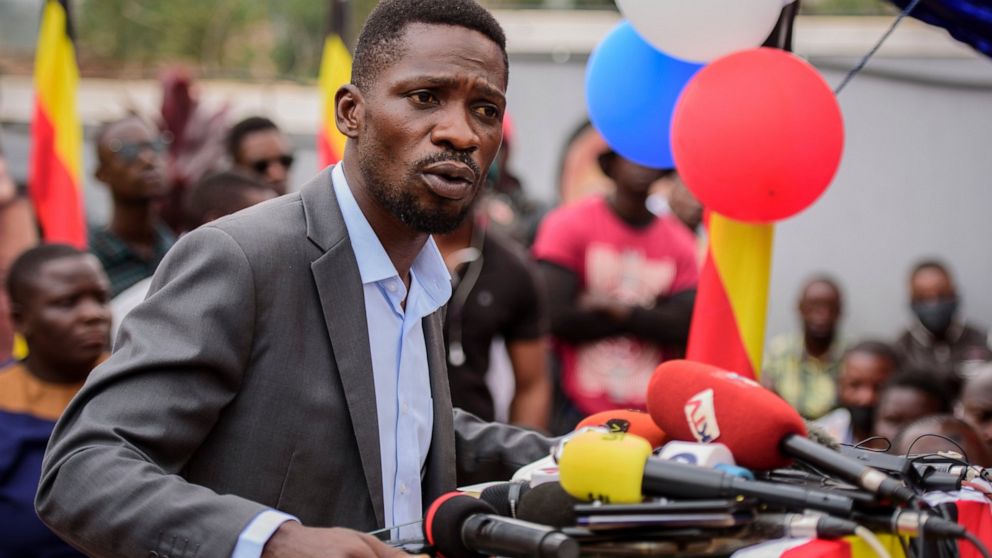 Wine, a singer and lawmaker whose real name is Kyagulanyi Sentamu, spoke on Tuesday, the day after police warned in a statement that some opposition politicians were planning nationwide violent demonstrations and riots beginning with Kampala, the capital. That statement warned that police had deployed strategically to counter these illegal acts.”

Ugandans must now rise to the occasion and resist Museveni and his regime of blood, he said. As we have been saying, we are nonviolent and lawful. Our philosophy stands firm. People power is stronger than the people in power.

Museveni was declared the winner of the Jan. 14 elections with 58% of the vote while Wine had 35%. Wine called those results fraudulent, citing cases of soldiers allegedly stuffing ballot boxes, casting ballots for people and chasing voters away from polling stations.

Uganda’s top court last week permitted Wine to withdraw a petition his attorneys had filed seeking to invalidate Museveni’s reelection. Wine said he no longer had confidence in the panel of nine justices, accusing the court of bias.

Museveni dismissed allegations of vote-rigging after electoral authorities announced his victory, calling the elections the most cheating-free since Ugandas independence from Britain in 1962.

Museveni, a former guerilla leader who took power by force in 1986 and has since been elected six times, is popular among many Ugandans for bringing relative stability and security. Museveni himself has castigated former leaders such as Idi Amin, whose regime was notorious for kidnappings and extrajudicial killings.

But opposition figures such as Wine accuse Museveni of increasingly ruling like his predecessors. They say corruption and alleged abuses by the security forces have become more widespread as Museveni tries to extend his rule.

Many of our brothers and sisters disappeared and they’ve never been seen again, Wine said on Tuesday, speaking of alleged disappearances in the aftermath of the presidential vote. Those who have been lucky to return have spoken of being subjected to unspeakable torture and brutality.

Some of the victims had been castrated, he said.

Museveni recently dismissed allegations that his forces have illegally detained civilians, saying his army is a disciplined force and that his party does not kill its opponents. But he acknowledged that he had beefed up security ahead of the elections by deploying soldiers from a commando unit previously deployed in Somalia who killed a few people he described as terrorists.

Uganda has never seen a peaceful transfer of power, one reason why even some within Museveni’s party openly say he must groom a successor. Rand Paul asks if YouTube will ‘kiss my ….’ and apologize after CDC revises mask guidance

Who is Aafia Siddiqui, the federal prisoner at the center of the Texas hostage situation?

The Ohio House on Wednesday voted to expel former Speaker Larry Householder (R) following his indictment in a federal bribery scheme, according to reports by ...
Read more

Julius Jones set for execution in Oklahoma for murder...

Julius Jones is set to be executed Thursday for a murder he says he didn't commit. Activists and celebrities have called on Oklahoma Governor Kevin Stitt to grant Jones clemency even as the victim’s family believes Jones is responsible and deserves to die. “C…
Read more

Former President Trump on Tuesday blamed his successor for the burgeoning crisis at the southern border, saying previous progress has been "eroded" under President Biden.In an interview with Fox News Channel's Mari...
Read more

Former President Donald Trump has been ordered to give a videotaped deposition in response to allegations that his security guards assaulted a group of Hispanic protesters at a 2015 rally outside Trump Tower.
Read more

Rupert Murdoch’s News Corp. wrote down the value of its once high-flying Sun title to zero, underscoring the dramatic decline in Britain’s newspaper industry.
Read more

Gloria Estefan has become the latest celebrity to speak out about the recent protests in Cuba.
Read more

Covid in Wales: Limits on social gatherings come into...

From 26 December, there will be strict limits on social gatherings in pubs, restaurants and cinemas.
Read more

Bubba Wallace on became the first Black driver since 1963 to win a NASCAR Cup Series race at the Talladega Superspeedway, ...
Read more

Eighty-three of 99 participants said the journalism environment has "changed for the worse" after a law was adopted in response to pro-democracy protests.
Read more

A music festival with men and women dancing side by side would have been unthinkable in Saudi Arabia just 5 years ago - this year, organizers of "MDL Beast" say 180,000 attended. Vivian Nereim reports on the festival pushing the boundaries of a changing kingd…
Read more

Though the conference organizer claimed it was not a QAnon event, the event's cowboy hat logo included the initialism "WWG1WGA" a QAnon slogan that stands for "Where we go one, we go all."
Read more

“Rush Limbaugh Show” guide-host Ken Matthews closed out the final airing of the EIB Network's iconic program Friday, with a potpourri of look-backs at the host's wisdom and reaction from callers.
Read more

A group of 70 bipartisan House lawmakers penned a letter to House and Senate leaders demanding a deal be reached so the National Guard can be reimbursed for its five-month deployment at the Capitol....
Read more

Former champions India and Pakistan will face off on Sunday in a Twenty20 World Cup blockbuster in Dubai and the buzz around the game underlines the enduring appeal of the matchup between the sub-continent's feuding neighbours.
Read more

Federal Reserve Chair Jerome Powell on Tuesday said climate stress tests will "very likely" be a "key tool going forward," a comment that may assuage progressives' concerns regarding his renomination to chief of the...
Read more

Don’t get burnt by email scams this summer with...

Can Democrats in Virginia and New Jersey replicate the...

Both races could be barometers for both parties for the 2022 midterms.
Read more

Rep.Vicky Hartzler of Missouri declared her candidacy for the Senate on Thursday, becoming the latest Republican contender in the 2022 race to succeed retiring GOP Sen. Roy Blunt.
Read more

Girl Scouts say they have 15 million boxes of...

COVID-19 pandemic forced the organization to halt their annual sales of Samoas, Thin Mints and other cookies.
Read more

Tesla Engineer Who Quit Wanted as Witness in Key...

Tesla Inc.s director of Autopilot software has left the company, but he may still be called as a witness in the first case...
Read more

If Nelson Cruz can put up his usual numbers in 2021, he’d be doing things rarely seen by a 40-year old.
Read more

Vermont Senator Patrick Leahy will not run for re-election...

Senator Patrick Leahy, the longest-serving active member of the Senate, will not seek re-election in 2022. Now questions are rising about who will run for his Vermont seat. E. Thomas Sullivan, the president emeritus and professor of political science at the U…
Read more

The Institute for Fiscal Studies (IFS) says the difference is mostly due to the Barnett Formula.
Read more

Bournemouth manager Jonathan Woodgate believes his side are underdogs as they face Brentford in the Championship play-off semi-finals (Mon, 18:00 BST).
Read more

I made fries in an Instant Pot… and they’re...

Can an Instant Pot that’s added air frying to its list of cooking methods replace an air fryer for making fries?
Read more

Thanks to a Prime Day Lightning Deal, these Sony WF-XB700 true wireless earbuds are over 50% off right now, but they're selling fast.
Read more

In a 1989 interview with Mike Wallace, Nancy Reagan talked frankly about her life with President Ronald Reagan. She died March 6, 2016, at the age of 94
Read more

These OnePlus phone deals cut nearly £300 off the...

Thanks to Prime Day various OnePlus phones are available discounted, including the OnePlus Nord and OnePlus 8 family.
Read more

West Point cadets made a huge mistake ahead of the Army-Navy football game next month.
Read more

Kittens raised by the female called Nell could be released into the Highlands to help save the species.
Read more

Murder inquiry after boy, 14, stabbed to death at...

POLITICO Playbook: ‘Everything is hanging by a thread’

And Democrats face down a looming government shutdown.
Read more

The findings of an audit of ballots cast in Arizona's largest county are expected to be released this week — more than nine months after President Biden was certified to have won the state. The Arizona Republic's Jen Fifield shares with CBSN "Red and Blue" an…
Read more

Biden to head to U.K. and Belgium for first...

President Biden has been sending the message to U.S. allies that America is "back."
Read more

A businessman accused of ordering killings which brought down the government will be tried again.
Read more

No Meaningful Differences in Male and Female Brains, Study...

Nebraska Republican Gov. Pete Ricketts told "Your World" on Tuesday that he has dispatched state troopers to assist the Texas Department of Public Safety because President Joe Biden “failing so miserably” at the southern border.
Read more

America First Legal is threatening lawsuits after Minnesota and Utah said they would consider race and ethnicity in determining eligibility for coronavirus treatments.
Read more

Carlos Casanova on the Markets (Radio)

Over two decades, the United States and its allies spent hundreds of millions of dollars building databases for the Afghan people
Read more

Airline entrepreneur David Neeleman’s newest carrier will begin flying May 27 with an initial network of 16 cities, making it the year’s second U.S. startup looking to use discount fares to grab a piece of a much-anticipated resurgence in leisure travel.
Read more

Sign up for our Middle East newsletter and follow us @middleeast for news on the region. Irans national currency stumbled to record-low levels after renewed...
Read more

The 26-year-old was known for his brilliant personality, comedic wit and outspokenness and had co-hosted "She Rates Dogs" for just over a year.
Read more

A Mexican restaurant in Texas is requiring people to...

As Texans looks ahead to the mask mandate ending and businesses reopening fully on Wednesday, one Houston restaurant is dealing with hateful comments because it said it will require customers to keep wearing masks.
Read more

Why a former oil executive is capping abandoned wells

Around the US, an estimated three million oil wells have been abandoned. They're more dangerous than we think.
Read more

England’s Chilwell and Mount forced to self-isolate after Gilmour...

England's Ben Chilwell and Mason Mount have to self-isolate after coming into close contact with Scotland's Billy Gilmour and could now miss Tuesday's game against the Czech Republic at Wembley.
Read more

Norway advises people return to using face masks again on public transport and in shops, and will now require all adults to isolate for five days if they test positive for Covid-19, regardless of vaccination status.
Read more

The female deputies claim they were molested by their intoxicated male commanding officers during undercover operations.
Read more

Puerto Rico’s Control Board is violating the spirit of...

We urge all parties to arrive at a fair resolution that protects the vulnerable retirees who are facing a cut to their benefits.
Read more

Harris tests negative for COVID for second time after...

The mild-mannered senator behind a major liberal push

Has Honduras become a ‘narco-state’?

President Hernández has been linked to what US prosecutors call "state-sponsored drug trafficking".
Read more

Kinzinger: GOP will become 'regional party' if it doesn't change