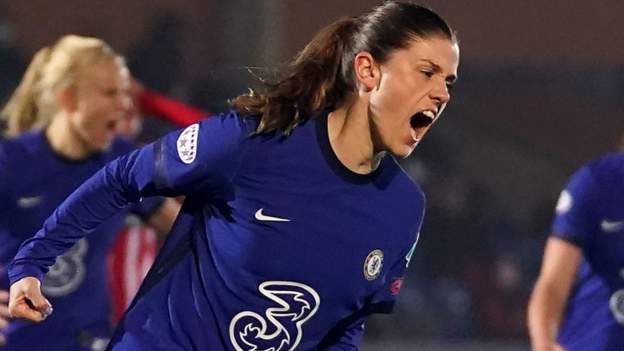 Emma Hayes says her Chelsea side must guard against complacency in the second leg of their Women’s Champions League last-16 tie against Atletico Madrid.

Hayes insists the job is not done despite the Blues holding a 2-0 aggregate lead after a home leg they won with 10 players for 80 minutes.

“That will be my message to the team, just be awake and be ready,” she said.

The Women’s Super League leaders will be without injured captain Magdalena Erikson and the suspended Sophie Ingle.

Wales midfielder Ingle was sent off when she conceded a 12th-minute penalty in the first leg at Kingsmeadow, which was saved by goalkeeper Ann-Katrin Berger, who also saved another penalty in the second half.

“We know we’re only halfway there and our level of concentration and focus has got to be even higher than they were in the home leg,” Hayes said.

“We’re still in the tie, we haven’t won anything but we’ve done it with more learnings than perhaps if there were 11 players on the pitch.”

The second leg is being played in Monza, Italy because of travel restrictions between the UK and Spain. Novak Djokovic back in detention, continues to fight deportation

‘Not that far apart’: Democrats near deal to break...

Speaker Nancy Pelosi is close to reaching an agreement with moderates that will pave the way for passage of the $3.5 trillion budget framework.
Read more

Giving boosters to vaccinated people in rich countries, while millions in poor countries go unvaccinated, is nothing short of greed, the WHO director-general said
Read more

The implosion of the Pontiac Silverdome, the former home of the Detroit Lions, didn't go as planned Sunday morning
Read more

More Than Half of Bitcoin Investors Got In Just...

Interest and demand in Bitcoin rose a lot in 2021 despite the digital asset’s turbulence. More than half of current investors got in over the last 12 months, according to crypto-firm Grayscale Investments LLC.
Read more

Altuve slugs way into MLB history as Astros down...

José Altuve started this game the same way he ended the one before.
Read more

Cyclist dies after crash with car at Stirling roundabout

The man was pronounced dead at the scene on the A84 at Craigforth near Stirling.
Read more

After saying ‘I’m Going to Disney World,’ Brady did...

After facing off against the Kansas City Chiefs’ defense, Tampa Bay Buccaneers quarterback Tom Brady had no problem taking a lightsaber to Star Wars’ Kylo Ren and a unit of storm troopers
Read more

Why You Gravitate to Puzzles When You’re Depressed

Puzzle games keep our minds occupied, even in our darkest moments. Here’s why they make you feel better, more capable, and more optimistic about life.
Read more

The TCL 20S is an impressive budget phone for its price, thanks to its crisp and vibrant display, respectable cameras, and big battery.
Read more

Who has moved on transfer deadline day?
Read more

In 2020, contributor Holly Williams reported on the unprecedented scale of Australia's bushfires, which showed the drastic effects of climate change.
Read more

The Biden administration is revealing the most tangible signs of a shifting pandemic strategy several weeks in the making. It is preparing a nation exhausted by two years battling the invisible enemy to live more feasibly alongside it.
Read more

Inflation is whittling raises for frontline workers to “pennies”

Low-wage workers are enjoying some of the biggest pay gains in years. For many, it's still not a living wage.
Read more

Deutsche Bank AG’s move uptown in New York City has taken a step forward, with the firm’s name unveiled on the Columbus Circle tower where it will open its new U.S. headquarters.
Read more

Call of Duty: Warzone cheaters are getting infected with...

Rose Byrne plays a fitness fanatic at the height of the aerobics craze in the 1980s. We explain how to watch the new series online now.
Read more

Is Xbox winning the console war with developers?

Recent reports suggest some developers prefer making games on Xbox over PlayStation, and that should worry everyone who owns a console.
Read more

Biden: Georgia officials ‘helped save our democracy’ by standing...

President Biden on Friday credited Georgia officials with helping to "save our democracy" by standing up to pressure from former President Trump and his allies over the 2020 election.Biden delivered remarks in Atla...
Read more

Los Angeles County wants Vanessa Bryant and others to...

Los Angeles County wants to compel the widow of NBA legend Kobe Bryant and others involved in a lawsuit over leaked photos of the helicopter crash that killed him, their daughter and seven others to take psychiatric exams before the case goes to trial, court …
Read more

French nightclubs will be able to re-open from July...

French nightclubs will be allowed to re-open from July 9 onwards, said government minister Alain Griset, allowing the industry to operate again for the first time since it was shut during the France's COVID-19 lockdown in March 2020.
Read more

Pfizer Tries To Keep Its Vaccine Recipe Under Wraps...

Hong Kong’s Stage-Managed Election Process Will Be Tested by...

The trappings of democracy are important to an authoritarian system. Getting people to go to the polls may be the biggest challenge.
Read more

‘The Serpent’: The True Story Behind the Netflix Show

"The Serpent" is the latest Netflix show to delve into a true crime story. Here's what happened in real life in the case of Charles Sobhraj.
Read more

Food banks embark on expansions with lessons from COVID

Nikkei to Underperform Topix in Near Future: Oasis Management

The church where nine people were killed by a gunman Wednesday night is known in the Charleston community as "Mother Emanuel." It has played a part in nearly every major political and social movement since it opened in 1816. Elaine Quijano reports on the chur…
Read more

Plumber who found cash stashed in wall of Joel...

The plumber who turned in hundreds of envelopes of cash and checks he found in a wall at televangelist Joel Osteen's Lakewood Church is getting $20,000 for his good deed.
Read more

Crews in Virginia ended a daylong search Thursday after they were unable to locate a 134-year-old time capsule state officials believe is buried in the pedestal of a statue of Gen. Robert E. Lee.
Read more

These features have been in the pipeline for a while – but it looks as though the groundwork is being laid for a full launch.
Read more

The number of COVID-19 cases in Poland is likely to accelerate in autumn, the Polish health minister said on Tuesday, as authorities urge people to get vaccinated before a potential fourth wave of infections.
Read more

Men found guilty in Arbery murder will go to...

Caitlyn Jenner to embark on statewide bus tour next...

California gubernatorial candidate Caitlyn Jenner announced Tuesday she will hit the road for a statewide bus tour Aug. 12 in her pursuit to remove Gov. Gavin Newsom from office.
Read more

Key Senate Democratic senators say they are undecided on supporting David Chipman, President Biden's nominee to be the director of the Bureau of Alcohol, Tobacco and Firearms.With no Republicans saying yet that the...
Read more

Intuit, the financial software company behind TurboTax, announced Thursday that it will no longer be participating in the IRS Free File Program that allows Americans to use brand-name products to file their tax retu...
Read more

The House Ways and Means Committee late Friday released an additional tranche of its portion of Democrats' $3.5 trillion social spending package, covering a wide range of issues such as the child tax credit, inf...
Read more

DNC chair: Texas election overhaul measure ‘one of those...

The iPad Pro 2020 12.9-inch is still a powerful and impressive tablet, even after being surpassed by the M1 chipset-packing iPad Pro 2021.
Read more

Iran nuclear talks to restart as US emphasizes it’s...

The US and its allies restart Iran nuclear talks on Monday unsure how Tehran's new government will approach negotiations, not optimistic about the prospects ahead and emphasizing that if diplomacy fails, the US is "prepared to use other options."
Read more

‘Why drilling holes in fences can save hedgehogs’

Jennifer Manning-Ohren is turning her community into a highway to help the endangered creatures.
Read more

Omicron Lands in U.S. With Hospitals Still Battered by...

The omicron variant will be met in the U.S. by a health-care system accustomed to Covid-19 surges yet battered by almost two years of fighting the pandemic with no end in sight.
Read more

The U.K. court appearance of the wife of a U.S. diplomat for her alleged involvement in a fatal accident in the country has been postponed until next week.Anne Sacoolas is accused of causing 19-year-old Harry Dunn'...
Read more

A home in a Gloucestershire town was hit by the most valuable space rock ever to fall on the UK.
Read more

In the Name of Hate

A brilliant Ivy League student is murdered after he went to a California park with a former high school classmate. Was he killed because he was gay and Jewish? CBS News correspondent Tracy Smith investigates for "48 Hours."
Read more

Biden expected to campaign for Newsom in California next...

Zillow Shuts Down Home-Flipping Business After Racking Up Losses

Zillow Group Inc. is pulling the plug on its tech-powered home-flipping operation after deciding that its pricing algorithms werent accurate enough to build...
Read more

The city says the department has ended the "very limited ... though legal" practice that wasn't "in the spirit of what the community expects." The outgoing state DA says the idea was to encourage confessions.
Read more

More charges have been filed against the man accused of killing 10 people at a King Soopers grocery store on March 22.
Read more

It comes days after US President Joe Biden called for a ceasefire in conflict-hit Tigray.
Read more

Jennifer Aniston says she's been "bullied" for taking a pro-vaccine stance during the COVID-19 pandemic."You know, someone literally called me a 'liberal Vax-hole' the other day," the "Morning Show" and former "Fri...
Read more

Anti-vaccine protesters tried to storm the Bulgarian parliament on Wednesday and briefly scuffled with police officers during a massive rally against coronavirus restrictions in downtown Sofia.
Read more

Japan's Naomi Osaka puts the controversy over her refusal to speak to the media to one side as she starts the French Open with a straight-set win.
Read more

Presented by New Yorkers for Responsible Gaming Gov. Andrew Cuomo is sorry, but he wont step down. Thats the takeaway from his first public...
Read more

Gronk progressing but remains out for week 6

The Senate Parliamentarian on Wednesday rejected Democrats' second attempt to try to include a pathway to legalization for immigrants in a bill that could be passed with just Democratic support, a source tells CNN.
Read more

MacBook Air and iPad Air could get new displays...

A man is shot in the leg as armed police respond to reports of a man with a rifle in Worcester.
Read more

Olympic organisers were on Sunday investigating after a group of athletes was found drinking together at the Village, while Tokyo sizzled in scorching temperatures as Tokyo 2020 lurched into day nine.
Read more

What does free antivirus software do?