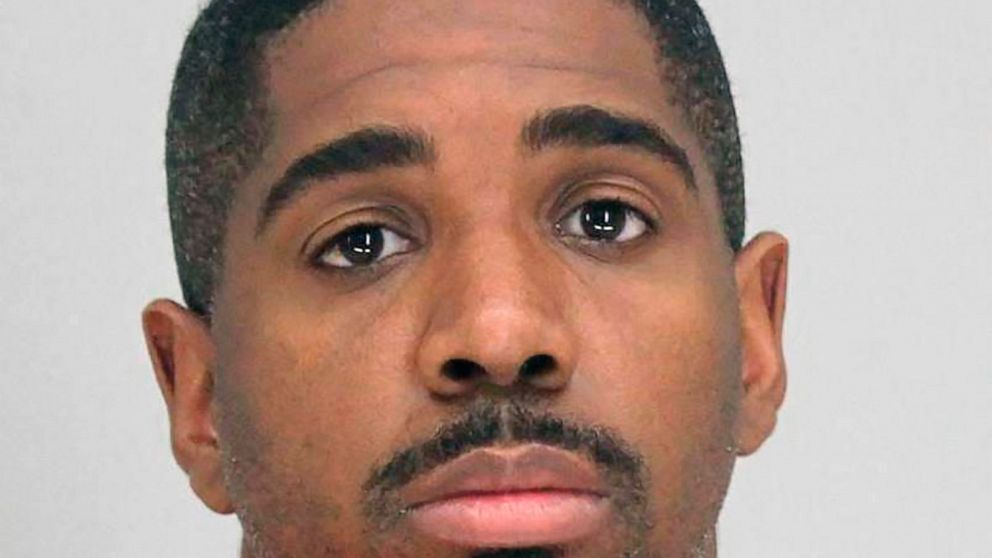 DALLAS — A Dallas police officer who was recently charged in an alleged murder-for-hire scheme was under investigation for longer than authorities have previously acknowledged, sharpening questions about why he continued to patrol the city as his colleagues looked into whether he was involved in a 2017 killing.

After Bryan Riser was arrested Thursday, former Dallas police Chief U. Reneé Hall said he was first identified as a person of interest in 2019 and was kept on the job to avoid tipping him off to the investigation. But in 2017, a Dallas police detective testified in court that Riser was the subject of an investigation into the killing of 31-year-old Liza Saenz, according to a transcript of the proceeding.

Riser was charged last week with two counts of capital murder in the killings of Saenz and 61-year-old Albert Douglas. The 36-year-old is being held on a $5 million bond and his attorney, Toby Shook, says hes innocent.

During the September 2017 court hearing, the detective also said that Saenz lived with Risers father and that before her death she had been a witness in another murder case. The testimony, which was first reported by the Dallas Morning News, came during a detention hearing in a federal drug case against Risers father, Byron Riser. Shook previously said Saenz lived with Byron Riser at one point.

The elder Riser pleaded guilty in 2018 to possession with intent to distribute a controlled substance and was sentenced to five years in prison. Hes currently at a residential re-entry center in Texas on community supervision, Shook said. Raducanu to make return on Friday at Indian Wells...

British teenager Emma Raducanu will return to competition for the first time since her improbable victory at the U.S. Open in her opening match of the BNP Paribas Open at Indian Wells on Friday.
Read more

Clint Frazier snapped an eighth-inning tie with a pinch-hit double and the New York Yankees hit three solo homers in a much-needed 6-5 win over the Toronto Blue Jays on Tuesday night.
Read more

Here are some upcoming events of interest to the employment law community. All times are local unless stated otherwise.
Read more

Call for investigation of menstrual changes after Covid jabs

There is no evidence of any impact on fertility - but research will help to counter false claims.
Read more

Swiss to start inoculating youngsters against COVID-19 as early...

The nation’s political centralizers find themselves distressed in an age in which there is increasing demand for decentralization. The post Last Stand of the Court Packers appeared first on The American Conservative.
Read more

The footage was released after city leaders and the victim's parents had called for full transparency.
Read more

Facebook paid billions extra to the FTC to spare...

The company allegedly agreed to overpay on the original $106 million penalty so its CEO and COO could avoid deposition and personal liability.
Read more

Muriel Gardiner's courage fighting fascism in Austria inspired an Oscar-winning film. Who was she?
Read more

Private funding was key in some 2020 elections. Republicans...

States move to cut off the private funding that local officials used to help people vote during the pandemic -- as partisan battles spread to nearly every aspect of election administration.
Read more

The James Webb Space Telescope is expected to be 100 times more powerful than the Hubble.
Read more

The history of discrimination against Black farmers in the...

A farmer’s life is never an easy one. But for many African American farmers, their work has been complicated by discrimination and often at the hand of government officials. Michelle Miller looks at that history and the efforts to address it.
Read more

Mikayla Miller’s Mother Alleges Police Are Covering up Her...

Miller's mother suspects that her daughter was lynched, but so far investigators have said the teen hanged herself with a belt.
Read more

It comes after the Department of Health reported four more deaths and 6,877 new cases.
Read more

With traffic fatalities spiking, the nation’s top safety investigator says a widely cited government statistic that 94% of serious crashes are solely due to driver error is misleading and the Transportation Department should stop using it
Read more

DO NOT USE: 25 Years Of Pokemon

OSHA has issued a federal rule mandating Covid-19 vaccinations or at least weekly testing for workers at U.S. companies with 100 or more employees.
Read more

Fortnite will not be returning to the Apple App Store until all appeals and legal rulings related to the high-profile case between the tech giant and game manufacturer Epic Games are resolved, according to a company execu...
Read more

Joel Embiid is injured in his first game since leaving Covid-19 isolation as the Philadelphia 76ers beat the Washington Wizards 127-101.
Read more

Three weeks into the school year, thousands of students and staff across the Atlanta metro have had to quarantine after being exposed to COVID, according to one estimate.
Read more

'The SpongeBob Movie: Sponge on the Run' stars Tom Kenny and Bill Fagerbakke answer the internet's burning questions about themselves and the characters they play. What does Tom Kenny's voice actually sound like? How did Bill Fagerbakke get the role of Patric…
Read more

The European Commission said on Monday that the reduction in deliveries of COVID-19 vaccines from Johnson & Johnson to EU member states was only temporary, and the company was still due to meet its contract for total doses by the end of this year.
Read more

This old Internet Explorer bug is being used to...

Ball, 3 other Hornets in NBA’s health and safety...

"Donald Trump would have shredded the Constitution to stay in power," Senate Judiciary Committee Chairman Dick Durbin said in a statement.
Read more

This tough Dutch e-bike has a cute sidecar for...

Cruise along the city streets with your four-legged friend at up to 15mph.
Read more

The Urban Poor are Paying a Steep ‘Murder Tax’...

The spike in violent crime since the anti-police protests last year has imposed hundreds of billions of dollars in costs The post The Urban Poor are Paying a Steep ‘Murder Tax’ Since 2020 appeared first on The American Conservative.
Read more

Review: A strenuously woke ‘Cinderella,’ for the #MeToo era

This new “Cinderella” is a decidedly woke, pop-infused re-telling of the old classic
Read more

Three people were arrested in Egypt for disposing of thousands of doses of COVID-19 vaccines without authorization, ...
Read more

Pence blames ‘weakness shown by the Biden administration’ for...

How Aar Maanta is teaching children in Minneapolis to sing in Somali and learn about their heritage.
Read more

England's Autumn Nations Series opener with Tonga remains in a state of uncertainty with the Rugby Football Union still waiting for results from the latest round of Covid-19 testing.
Read more

A scientist at the World Health Organization (WHO) said Tuesday that the delta variant of the coronavirus has become “predominant worldwide.”“If delta is identified or starts to circulate in a country where there's beta, in South Africa for example...
Read more

iPhone periscope cameras could be years away

A reputable source has shared lots of details about the iPhone 13, iPhone 14, and even the iPhone 15.
Read more

Formula 1 is in danger of not having any sprint events this year as a result of a stand-off over money, says McLaren boss Zak Brown.
Read more

A dangerous heat wave is continuing to threaten the western U.S. on Thursday with excessive heat warnings and heat advisories across California, Nevada, Utah, and Arizona as highs climb into the 90s, 100, and upper 110s.
Read more

Biz Markie — the rapper, DJ, and entertainer best known for his Top 10 hit 'Just a Friend' — has died at the age of 57.
Read more

Diego Schwartzman comes from behind to defeat Greece's Stefanos Tsitsipas and secure victory for Argentina in their ATP Cup tie.
Read more

Here, we run down how to get F1 TV on Roku so you can catch all the thrills and spills form the comfort of your sofa.
Read more

Millions caught in deep freeze across the U.S.

Fara Williams and Lucy Bronze debate whether any player could catch Williams' 172 England appearances after Covid-19 as they join ex-New Zealand international Bex Smith on The Players podcast.
Read more

Jake Paul goes the distance for the first time in his fledgling boxing career with a split decision victory over Tyron Woodley on a glitzy night in Cleveland.
Read more

England fast bowler Jofra Archer will have surgery on his right hand after cutting himself while cleaning at his home in January.
Read more

The PS5 is selling faster than all other Sony consoles, but why can't you still get one?
Read more

But Bejing says it's highly unlikely to spread widely among humans and poses a low risk of death or severe illness in birds. The man who has it was in stable condition.
Read more

Spanish man jailed for killing and eating his mother

The 28-year-old was arrested after body parts of his mother were found scattered in her Madrid flat.
Read more

A judge on Wednesday said the trial involving sexual assault allegations against Prince Andrew will likely begin late next year.U.S. District Judge Lewis A. Kaplan said that the trial will likely take place between September and December of 2022,...
Read more

In Dubai, Filipina pulls no punches in jokes on...

A Filipina comedian in Dubai is offering an unfiltered glimpse into the life, sly triumphs and slights faced by her 2.2 million compatriots across the Middle East
Read more

A 28-year-old man has died following the incident in Church Street on Monday morning.
Read more

India's Shubman Gill, Washington Sundar and Avesh Khan are ruled out of the Test series against England because of injury.
Read more

A Texas inmate convicted of fatally beating his great aunt was executed on Wednesday night, despite pleas from members of his family to spare his life.Jeremy Desel, a spokesperson at the Texas St...
Read more

Damian Lillard had 34 points and nine rebounds, and the Portland Trail Blazers raced to a 140-129 victory over the Houston Rockets on Monday night.
Read more

German prosecutors searched the finance and justice ministries on Thursday as part of an investigation into the government's anti-money laundering agency.Prosecutors are probing the Finance Intel...
Read more

Want the lowdown on European markets? In your inbox before the open, every day. Sign up here. Giorgio Armani SpA sees pre-pandemic level sales...
Read more