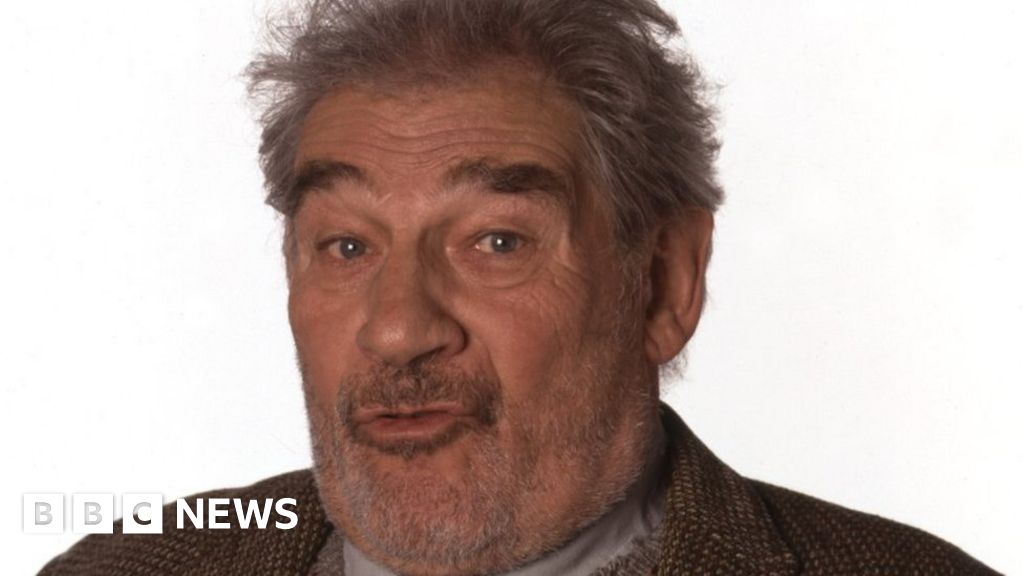 The Vicar Of Dibley actor Trevor Peacock has died aged 89, his agent has confirmed.

The actor played the lovable but dim-witted Jim Trott in the comedy series alongside its main star Dawn French.

His family said in statement: “Trevor Peacock, actor, writer and song-writer, died aged 89 on the morning of March 8th from a dementia-related illness.”

Parish council member Jim won viewers’ hearts with his catchphrase of “no no no no…” and his cheeky innuendo.

Although most famous for the long-running Vicar of Dibley, Peacock was also an accomplished Shakespearean actor, starring in a number off BBC productions including Titus Andronicus, Twelfth Night and Henry V.

The actor also appeared in the 1990 movie version of Hamlet and a 2000 production of Don Quixote.

And he was a successful musician and songwriter. He appeared with the Beatles in a 1964 television special Around the Beatles, and wrote a number of pop hits.

Blinken says Russia must decide if it wants better...

'Ultimately it's up to Russia to decide,' he said.
Read more

Jindal: “Immigration without assimilation is invasion”

How the Workplace of the Future Could Leave Women...

Women are more likely to want to work remotely. But what if it ends up working against them?
Read more

The Illinois Department of Children and Family Services launched two investigations into deceased 6-year-old Damari Perry's mother prior to his tragic death, according to local reports.
Read more

Haiti earthquake: The forgotten villages cut off from help

The tremor razed their homes, but these survivors could still die for a lack of basic supplies.
Read more

Israeli Ambassador to the UN and US Gilad Erdan told the Associated Press on Monday that the Palestinian terror group Hamas was using its now destroyed Gaza building to obstruct the Iron Dome missile defense system.
Read more

Residents in some areas hit by Storm Arwen are struggling to heat their homes - and themselves - three days on.
Read more

Its closure was the latest setback for the city’s freedom, and fresh cause for unease about the future of free speech in the global financial and media hub as Beijing cracks down on dissent.
Read more

Becerra: Investigation into COVID-19 origins must be ‘transparent’

Health and Human Services Secretary Xavier Becerra is calling for an investigation into the origins of COVID-19 to be "transparent" after renewed interest in the topic grew this week."Phase 2 of ...
Read more

Colts vs Cardinals live stream: how to watch Christmas...

Here's how to get an Indianapolis Colts vs Arizona Cardinals live stream and watch NFL football around the world, as Indy presents the biggest test of the Cards' fast-unravelling season.
Read more

Taiwan steps up border curbs to keep out Delta...

Taiwan will tighten border controls to keep out the highly contagious Delta variant of the coronavirus, authorities said on Friday, requiring arrivals from five countries, including Britain, to be placed in centralised quarantine facilities.
Read more

Scotland's Gordon Reid celebrated his first day of freedom at the Tokyo Paralympics by moving within two wins away of retaining his wheelchair tennis men's singles title.
Read more

Guatemalan authorities said on Monday they have sent back more than 600 migrants who entered the country in a caravan that was bound for the United States.
Read more

Rangers hope to appoint a new manager before Sunday's League Cup semi-final but he may not be in the dugout at Hampden.
Read more

Senator Cory Booker, D-New Jersey, says the plan is simple. "We are going to do everything we can to stop them," he says.
Read more

As vaccinations drop, outreach workers hit the streets to...

TikTok sued for billions over use of children’s data

The case is being brought on behalf of millions of children by England's former children's commissioner.
Read more

Sen. Kyrsten Sinema (D-Ariz.) is digging in on her opposition to nixing the 60-vote legislative filibuster amid growing pressure from progressives to change the rules to help pass voting rights.Sinema, in a ...
Read more

The Logitech G305 Lightspeed Wireless is an impressive contender that hits its target every time despite being cheaper than its rivals.
Read more

Lillard explains reasons for deciding to play in Olympics

Damian Lillard has a whole slew of reasons why he decided to play for USA Basketball at this summer’s Tokyo Olympics.
Read more

The head of the U_N_ nuclear watchdog says Iran has failed to answer questions about the discovery of uranium particles at former undeclared sites in the country He is calling on Tehran to provide information “without further delay.”
Read more

Missing workers are turning out to be as big a headache for airlines as missing luggage. U.S. carriers hoping to build out flight schedules face headwinds from unfilled jobs and, in the case of Southwest Airlines Co., a surprising spike in staffing no-shows.
Read more

Nearly nine in ten voters say they are concerned about the rising cost of living in the U.S., according to a new survey from the conservative advocacy group the American Action Network.Eighty-eight percent of voter...
Read more

Twenty years after the horrific attacks on New York and Washington, it’s clear that the biggest changes of our time were not ideological or geopolitical, but technological. They were also the hardest to foresee.
Read more

India's government said on Thursday it has inked a deal with domestic vaccine maker Biological-E for 300 million COVID-19 vaccine doses for 15 billion rupees ($205.62 million), the first such order for unapproved shots.
Read more

With most people getting their news online through social media and dedicated apps, Microsoft is updating the way Windows 10 presents the news to make it more eye-catching in a bid to stand out from the crowd. Insiders can check out the updated design in the …
Read more

"We hereby find the cause and manner of death to be ... by strangulation," Teton County Coroner Brent Blue said.
Read more

Britain's competition regulator on Friday opened a formal investigation into Amazon (AMZN.O) and Alphabet Inc's Google (GOOGL.O) over concerns the tech giants have not done enough to combat fake reviews on their sites.
Read more

A white non-commissioned Army officer was charged on Wednesday with third-degree assault after he was seen in a viral video shoving a Black man and telling him, "You're in the wrong neighborhood."...
Read more

Bruno Covas, mayor of the Brazilian city of Sao Paulo, has died after a two-year battle with cancer. He was 41. Covas died on...
Read more

Ida churns up tension on infrastructure vs. climate change

The Category 4 hurricane and its 150 mph winds are offering new ammunition to backers of the Senate-passed infrastructure bill.
Read more

Rittenhouse hearing to decide on evidence allowed at trial

The world’s biggest online travel agency is in favor of vaccine passports that would make it safer and easier for people to travel.
Read more

Dr Samy Sadek tells an inquest he was met by "very distressed" police when he arrived at Fishmongers' Hall.
Read more

The film body was criticised for giving the actor a special award despite sexual misconduct claims.
Read more

The whisky expert who fears losing his senses to...

Blair Bowman is living in a self-imposed lockdown amid fears he could lose his livelihood to the virus.
Read more

Demographically, the residents of D.C. skew younger than the rest of the country. Younger people have been found to be more likely to transmit COVID-19.
Read more

Philippines tells China to mind its own business over...

China has no business telling the Philippines what it can or cannot do within its waters, Manila's Defense Ministry said on Wednesday, rejecting Beijing's opposition to its ongoing coast guard exercises.
Read more

A shipwreck 260 miles east of Boston has been identified as that of the storied Coast Guard ship U.S. Revenue Cutter Bear
Read more

With a growing number of countries choosing to tax the revenue of internet giants such as  Amazon and Facebook, the U.S. — where many of world's biggest online firms are based  — is looking for ways to push back.
Read more

Officers who testified at 1/6 hearing call for police...

Still grappling with physical and mental trauma from the January 6 insurrection, several police officers who were on the front lines that day want more support from the nation's largest police union and are calling on law enforcement groups to publicly denoun…
Read more

CBS News weather producer David Parkinson talks about dangerous conditions ahead of the July Fourth holiday weekend for millions of people in the western United States and Canada.
Read more

Rent bills are piling up. Landlords can’t pay the mortgage. We need a long-term solution to stabilize the rental market. Fast.
Read more

Japan's Naomi Osaka cruises into the third round of the Tokyo Olympics women's singles with a 65-minute victory over Viktorija Golubic.
Read more

Moderna Inc. said that a new analysis of the late-stage clinical trial of its Covid-19 vaccine found a higher rate of breakthrough cases in people who got shots early in the study.
Read more

The brother of Jeffrey Epstein’s former girlfriend Ghislaine Maxwell says she should be released on bail from a U.S. jail
Read more

Canada and Denmark go on the green list while Thailand and Montenegro are added to the UK red list.
Read more

The painful history of anti-Asian hate crimes in America

While hate crimes in the U.S. increased last year by 2% overall, hate crimes against Americans of Asian-American and Pacific Islander descent rose by 146%; they have had to weather discrimination and violence many times before.
Read more

The creator of Evernote is getting into video.
Read more

The United States and European Union will pledge closer cooperation on fighting climate change at a summit on Tuesday, but will steer clear of setting a date to stop burning coal, according to a draft joint statement.
Read more

Jayson Tatum scores 28 points as the Boston Celtics come from behind to beat the Denver Nuggets 105-87 in the NBA.
Read more

Pakistani health authorities on Monday announced the completion of a successful clinical trial of Chinese traditional herbal medicine for treating COVID-19, as the South Asian nation enters a fifth wave of the pandemic driven by the Omicron variant.
Read more

Marcelo Bielsa said his Leeds side "dominated" against Brentford, the match ended in a 2-2 draw thanks to a late Patrick Bamford goal.
Read more

Man jailed in fatal crash at Minneapolis rally has...

Minneapolis police say a 35-year-old St. Paul man with multiple convictions for driving while impaired is the driver who plowed into a crowd of demonstrators, killing one and injuring three others
Read more

As Covid-19 infection rates continue to rise across the U.K., more than 60,000 fans were allowed to watch the game at London's Wembley stadium.
Read more

Kate Wilson met the undercover officer while he was posing as an environmental campaigner in 2003.
Read more

From 12 April, two people - as well as babies and young children - will be allowed for indoor visits
Read more

Where – and why – is corporal punishment allowed...

A video of a Florida principal using a paddle to discipline a student has stirred up debate online.
Read more

Niger's Mahamadou Issoufou - why he won a $5m prize