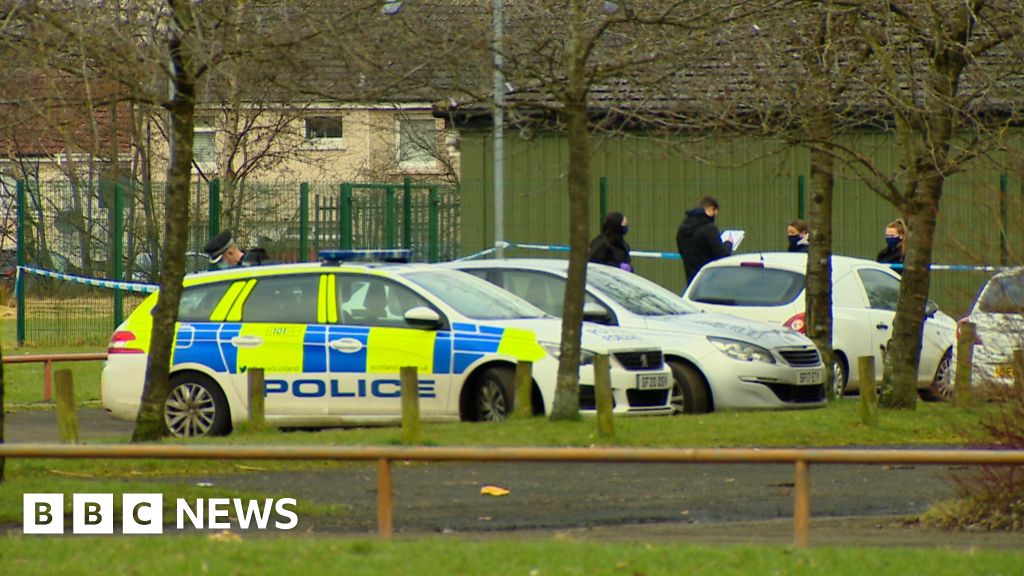 image captionThree people were taken to hospital following the incidents

A 19-year-old man has been arrested and charged in connection with two attempted murders and a serious assault in Glasgow.

Three men, two aged 21 and one aged 19, were stabbed in a car park at Greenfield Park football pitches on Duror Street at about 20:20 on Saturday, 27 February.

All three men were taken to Glasgow Royal Infirmary with serious injuries.

The arrested man is due to appear at Glasgow Sheriff Court later.

Det Sgt Stephen Greenshields, of Shettleston CID, said: “We would like to thank the local community for helping us with our investigation and providing information.” EXPLAINER: The federal charges against 3 cops in Floyd death

Oath Keepers stockpiled 30 days of supplies, rifles ahead of Jan. 6

Man due in court over fatal assault on Ashling Murphy

Resident Evil Village will have ray tracing, but AMD’s...

Germany and France are the latest countries to advise citizens to leave, as the UN relocates staff.
Read more

Covid: Plans for fewer rules in Wales to be...

It is not expected all rules will go, or that Wales will move as quickly as England.
Read more

The show is so massive this year that it can't be contained to a single night. It all kicks off Sunday, May 16
Read more

The lionization of Kyle Rittenhouse by the right

A not guilty verdict wasn’t needed to turn the 18-year-old into a conservative cause célèbre. But he got one still.
Read more

Arrest made in connection with LA wildfire

One person is in custody and is reportedly being treated for smoke inhalation in connection with a wildfire in California's Napa County, authorities said at a press conference Monday....
Read more

Beaten down by the pandemic, some laid-off or idle restaurant workers have pivoted to dishing out food with a taste of home
Read more

ESG Investing Is Here For The Long-Term: Basak (Radio)

It follows pressure from the Scottish Greens who described the the course specification as 'absurd'.
Read more

Africa, with its internationally recognised musical talent - and growing mobile phone use - is central to Swedish music streamer Spotify's (SPOT.N) plans to extend its reach to a billion c…
Read more

GameStop gearing up to name Cohen as its chairman

Greenhouse gas emissions from the electric sector have rebounded back to their pre-pandemic levels, according to new research.An analysis by the London-based climate think tank ...
Read more

It was the first such launch in about two months in the always tense region.
Read more

AG says she did not review video of Toledo...

Cook County Attorney General Kim Foxx said that she had not seen bodycam footage showing an interaction between Adam Toledo and police before a county prosecutor said that he was holding a gun in court. ...
Read more

Twenty-one tons of sand are transforming the Brooklyn Academy of Music into a day at a beach for the staging of the global warming opera Sun and Sea.”
Read more

The iPhone 12 is one of the finest phones of 2021, but how does it compare to the solidly dependable (not to mention cheap) iPhone XR?
Read more

President Biden and Turkish President Recep Tayyip Erdogan exchanged hearty smiles and elbow-bumps Monday in their first face-to-face meeting on the sidelines of the NATO summit in Brussels.Biden...
Read more

A Las Vegas hotel that defied coronavirus restrictions in 2020 and was fined by the state lost its legal battle on Friday.
Read more

Dozens of staff members at Houston Methodist Hospital protested against the facility's COVID-19 vaccine mandate for employees on Monday night, the deadline for workers to be inoculated.Houston Me...
Read more

Paid Content for Novo Nordisk Produced by WIRED Brand Lab | Losing weight is hard and maintaining it can be just as difficult. We sat down with Dr. Holly Lofton of NYU's Grossman School of Medicine to discuss the impact weight has on a person's health, the bi…
Read more

The Republicans racing to replace Brady on Ways and...

With Melanie Zanona, Sarah Ferris, Marianne Levine and Kyle Cheney. SMILE LIKE YOU (WAYS AND) MEANS IT: Who will write the GOPs next tax...
Read more

The scandal-plagued Democratic mayor of Rochester, N.Y., who is facing felony charges and married to an alleged drug-trafficker, has lost her primary and won’t run as a third-party candidate, bringing an end to her tenure as head of the city after two terms.
Read more

More than 1 million people in Cuba per day are using an anti-censorship tool supported by the U.S. government to evade government blackouts of social media such as Facebook.
Read more

A woman says a lack of basic information about her mother's death has left her feeling "numb".
Read more

Used cars are selling for more now than when...

Pandemic and a global shortage of computer chips are pushing car and truck prices to wacky levels.
Read more

Former Rep. Lou Barletta (R) holds a wide lead in the GOP primary to be Pennsylvania's next governor, according to a poll released this week....
Read more

Classic games like chess and Sudoku are now easier...

Apple Arcade has added loads of classic games to its roster like chess, solitaire, Sudoku, backgammon and more.
Read more

Gareth Southgate: England boss says he does not have...

Gareth Southgate says England's situation is "more complicated than any other country" after announcing a 33-man provisional squad for Euro 2020.
Read more

An iPad Pro (2021) is likely to be coming soon, so here are five of our favorite leaks of features we could see.
Read more

Welcome to Monday, Europe. Here’s the latest news and analysis from Bloomberg Economics to help you start the week.
Read more

The death of Daunte Wright, the 20-year-old Black man who was shot on Sunday by a police officer at a traffic stop in Brooklyn Center, Minn., died of a homicide.The Hennepin County Medical Examiner ...
Read more

Writing songs in lockdown: ‘It was an escape’

Musicians amateur and professional have joined in a BBC-led project to document lockdown songs.
Read more

Judge rules against Apple in App Store dispute with...

A California judge has ruled Apple must allow other forms of in-app purchases. The decision came in a closely-watched trial between Apple and Epic Games, the maker of Fortnite. CBSN tech reporter Dan Patterson joins anchor Tanya Rivero with more.
Read more

Marvel Studios has announced a spate of new MCU Disney Plus shows, including an Agatha Harkness spin-off series.
Read more

The two-dose Moderna vaccine is open to Americans 18 and older.
Read more

European authorities are pleading for patience, calm and a willingness to still take a COVID-19 vaccine shot in the arm as infections and demonstrations increase
Read more

Connecticut tobacco field where MLK worked to be historically...

The Connecticut tobacco farm where Dr. Martin Luther King Jr. worked in the 1940s will be historically protected.The Trust for Public Land and the town of Simsbury, Conn. announced in a ...
Read more

The Vivo X60 maybe the base variant of the new series launched, but it packs a powerful camera with a brilliant display and design.
Read more

About 2M dehumidifiers recalled in US, possible fire hazard

The Consumer Product Safety Commission says about 2 million dehumidifiers made by New Widetech are being recalled in the U.S. because they can overheat and catch fire, posing fire and burn hazards
Read more

Civil rights leaders were pleased with President Joe Biden's call on Tuesday to change Senate filibuster rules to pass voting rights legislation, but insist they will not be satisfied until a bill is passed.
Read more

Morrison Aims to Win Back Women Voters in Australia...

Nike says it ended deal with Neymar amid assault...

As Watford prepare to face Liverpool, BBC Sport looks back at the Hornets' 3-0 victory which ended a run of 18 straight Premier League wins for the Reds in 2020.
Read more

Daniel Goldman, a former federal prosecutor who served as counsel to House Democrats in the first impeachment investigation of former President Trump, announced on Tuesday that he will run for New York attorney general....
Read more

Only nine Republicans in the chamber voted to hold Mr Bannon in contempt.
Read more

Leeds United play the whole second half with 10 men as they secure an outstanding win and slow Manchester City's charge to the Premier League title.
Read more

Get your yard ready for the Halloween spooky season with these devilish decorations from Amazon.
Read more

Domestic Abuse Bill: For these victims, a new law...

The landmark Domestic Abuse Bill became law this week. Two survivors describe what it means for them.
Read more

A fight broke out in a school parking lot in Colorado that ended with three students shot and in the hospital. The Aurora Police Department said in a ...
Read more

House Minority Leader Kevin McCarthy (R-Calif.) is calling for investigations into President Biden's handling of the crisis in Afghanistan, where the democratic government was toppled over the weekend by Taliban forces fo...
Read more

Trump asks for stay to stop release of records...

Former President Trump is asking a federal appeals court to stay a Friday deadline for the National Archives to begin handing over records from his administration to the House January 6 Select Committee.Trump's law...
Read more

Chief Of Naval Operations Admiral Michael M. Gilday issued a stark warning to lawmakers about the dangers of funding the military under continuing resolutions, testifying that the lack of a stable and predictable budget will harm the Navy's ability to confron…
Read more

Cleland served one term in the U.S. Senate and as administrator of the Veterans Administration, as Georgia secretary of State and as a Georgia state senator.
Read more

Buffalo Bills rookie defensive end Gregory Rousseau has yet to step onto an NFL field for a regular-season game, but he’s already making a difference for one key member of his family.
Read more

Conservatives that opposed the bipartisan infrastructure bill are striking a new tone on the $1.2 trillion package.
Read more

Is Japan’s remarkable vaccine drive in time for Olympics?

After months of delays due to political and bureaucratic bungling as well as a shortage of vaccines, inoculations in Japan are taking off, and the drive is now racing down to the wire with the Olympics starting in one month
Read more

Cheney likens claims that Jan. 6 was a ‘false...

Rep. Liz Cheney (R-Wyo.) on Sunday likened the claims that the Jan. 6 attack on the Capitol was a "false flag operation" to individuals who say the Sept. 11 terrorist attacks were an "inside job."Asked...
Read more