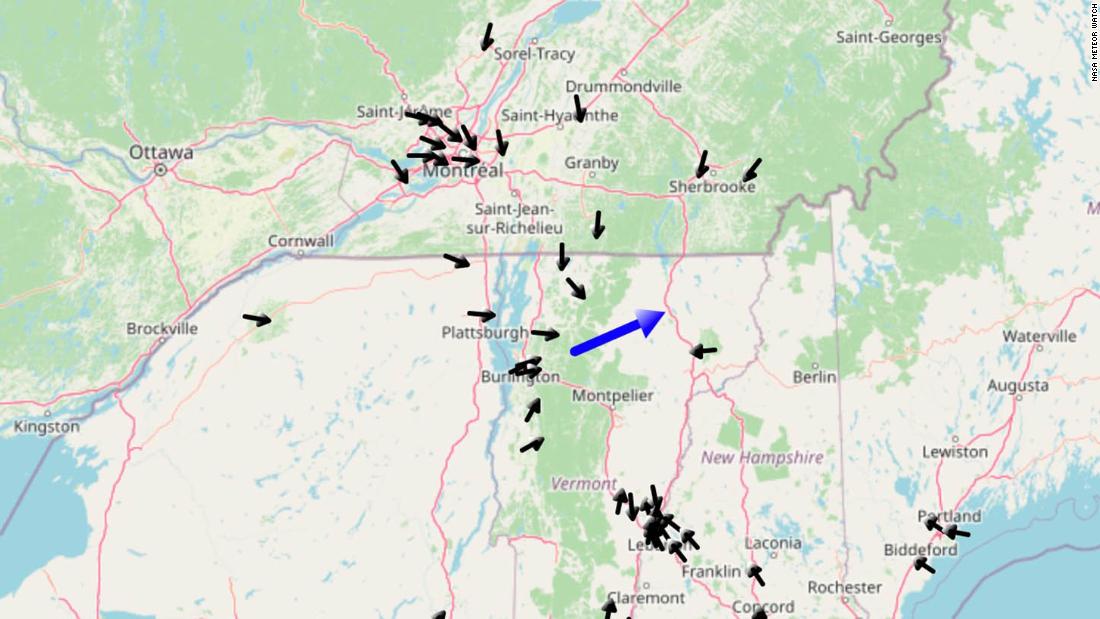 (CNN)A fireball, traveling at an estimated 42,000 miles per hour, was spotted over the skies of northern Vermont and Canada on Sunday night, officials said.

“There was no sound whatsoever,” Al Gregoritsch of South Burlington told CNN affiliate WPTZ. “I was very excited to see it. It’s a phenomenon I will never forget.”

The meteor was seen traveling northeast across 33 miles — from Mount Mansfield State Forest to Beach Hill in Orleans County south of Newport., the agency said.

NASA Meteor Watch said the object was likely a fragment of an asteroid, while the tremors witnesses reported were caused by a pressure difference between the front and back of the object.

“The space rock fragmented violently, producing a pressure wave that rattled buildings and generated the sound heard by those near the trajectory,” the agency said. “Such a pressure wave can also couple into the ground, causing minor ‘tremors’ that can be picked up by seismic instruments in the area.”

Based on infrasound measurements, which are low-frequency sounds that can travel great distances, the agency was able to measure the fireball as weighing about 10 pounds with a diameter of around six inches.

The agency called it, “A nice little firework, courtesy of Mother Nature.” 5 ways to celebrate Betty White on her 100th birthday

I don’t care if gaming chairs suck, I’m not buying a Herman Miller

Tigers’ Casey Mize forced to change glove over its...

Detroit Tigers pitcher Casey Mize was frustrated with an umpire Tuesday night during his outing against the Kansas City Royals amid MLB’s crackdown on foreign substances.
Read more

16 killed in crash of plane carrying skydivers in...

A plane carrying parachute jumpers crashed after takeoff on Sunday in Russia, resulting in 16 deaths and six people being injured.The crash occurred in the western region of Tatarstan, ...
Read more

Jason Robert Burham Karimi told a U.S. representative "we're coming for ya" and "we're going to cause you pain in every way possible."
Read more

Ngannou knocks out Miocic at UFC 260 to capture...

Francis Ngannou knocks out Stipe Miocic in the second round to capture the undisputed UFC heavyweight title in Las Vegas at UFC 260.
Read more

Ed Barnard misses out on a century but Worcestershire amass 421 before taking three Derbyshire wickets at New Road.
Read more

The newswire service told its editors and reporters to refrain from highlighting case counts in their reporting.
Read more

America's servicemen and women put their lives on the line for our freedoms. Ensuring that they can enjoy those freedoms to the fullest when they return is a top priority.
Read more

Texas officials on Tuesday voted unanimously to support a resolution calling for George Floyd to be posthumously pardoned for a drug arrest from over 15 years ago.All five members of the Harris County Commissioners...
Read more

What this year’s extreme weather says about climate change...

"The jet stream may be kind of becoming more loopy and slowing down, causing systems to slow" and raising the potential for floods, CBS News climate specialist Jeff Berardelli noted.
Read more

England's Ollie Robinson hits high but is comfortably caught by Kyle Jamieson at fine leg as New Zealand keep up the pressure on day four of the first Test at Lord's.
Read more

Tasmanian Devils have been born in the wild of the Australian mainland for the first time in more than 3,000 years.
Read more

More manatees have died so far this year than in any other year in Florida's recorded history.
Read more

TikTok named as the most downloaded app of 2020

The Chinese app's popularity comes even after former President Donald Trump tried to ban it in the US.
Read more

Most cancers linked to alcohol use were in people who have more than two drinks a day.
Read more

Jesse Smith, the 38-year-old U.S. men’s water polo captain, said he will be sitting out the opening ceremony in Tokyo on Friday due to restrictions on the number of people who can partake in the event, according to a report.
Read more

Covid: Stillbirth and prematurity risks may be higher

A study suggests that while the overall risks remain low, coronavirus may increase stillbirths.
Read more

Indian Prime Minister Narendra Modi is under increasing pressure to impose a nationwide lockdown as the country grapples with the world's worst Covid-19 outbreak.
Read more

The PM's ex-top aide told officials to "immediately" issue a £530,000 grant with "no procurement".
Read more

The Grammy-winning artist was best known for her influential career in folk and country music.
Read more

Were you in Australia in 1965? Did you help a homesick Welsh friend send himself home in a crate?
Read more

Biden administration intends to relocate thousands of Afghans who...

The Biden administration intends to relocate thousands of Afghan nationals who have worked alongside US diplomats and troops in order to protect their safety while they wait for their visa applications to be approved, senior administration officials say.
Read more

The harmonious US city run by Muslim Americans

Once a Polish enclave, Hamtramck, Michigan is now the first US city with an all-Muslim government.
Read more

The season of Brazilian forest fires has begun, and early data plus severe drought is sparking concern that nationwide destruction in 2021 will stay at the high levels recorded in the past two years, despite efforts to tamp down the blazes
Read more

Steven Soderbergh’s ‘No Sudden Move’ to premiere at Tribeca

The Steven Soderbergh crime drama “No Sudden Move,” a film shot last year with safety protocols in the midst of the pandemic, will premiere as the centerpiece gala at the Tribeca Film Festival next month
Read more

The White House on Wednesday will convene a virtual meeting on countering ransomware with senior officials representing 30 countries and the European Union, Biden administration officials said, as part of President Biden'...
Read more

England will allow foreign holidays from 17 May, but the restriction may not be relaxed in Scotland.
Read more

A new incentive program to attract remote workers to Greensburg, Indiana, includes stand-in ”grandparents” and cash incentives for those who move to the rural city within the next six to 12 months
Read more

Google Meet is doubling down on virtual backgrounds and...

Alabama Republican Gov. Kay Ivey on Monday signed a bill into law banning the use of so-called vaccine passports in the state.
Read more

A Material Thinner Than Human Hair Could Slash Carbon...

Here’s why you should probably never buy official printer...

UK police contacted over report of cocaine use in...

Andy Zaltzman squares up to the week's headlines with panellists Hugo Rifkind, Susie McCabe, Daliso Chaponda and Lucy Porter. Panellists lobby for points as they answer questions on the Greensill affair and the theft of a giant rabbit. Written by Andy Zaltz…
Read more

Dua Lipa brought the club to the 2021 Grammys with a little help from DaBaby.
Read more

Emma Raducanu and her brand of tennis with a smile is capturing the imagination after reaching the US Open semi-finals on her debut.
Read more

Congressman calls for Governor of Texas ‘to start disregarding this president’

Florida’s Republican Gov. Ron DeSantis is proposing a program allowing states to contract with private companies to transport and remove “unauthorized aliens” out of the state.
Read more

Surging Rays in tight race with Red Sox atop...

It should be obvious by now: You doubt the Tampa Bay Rays at your own risk.
Read more

Europe Finally Set to Vote on How to Control...

European lawmakers vote today on new laws that will attempt to reign in the world’s largest tech companies.
Read more

Kylie Minogue confirms she is moving back to Australia

The singer tells the BBC she is returning to the country of her birth after 30 years in the UK.
Read more

A Hong Kong stock that had soared nearly 450% the past year plunged in its first trading day as a member of an index compiled by MSCI Inc.
Read more

Manchin to join Democrats in Senate showdown vote over...

The Senate is slated to hold a key procedural vote Tuesday on the Democrats' "For the People Act" election reform bill Republicans are expected to be able to block.
Read more

Brace yourselves. The maps are coming.

As festivals become a familiar sight in the kingdom, some women say they do not feel safe to attend.
Read more

President Joe Biden is planning to sign executive actions on police reform as early as this month, three people familiar with the plans said, as his administration seeks to unilaterally jumpstart an issue that’s a top priority for a key constituency.
Read more

Rumors suggest Samsung may make a folding tablet, so what do we know so far?
Read more

Donald Trump Dances Out of Thanksgiving Turkey in Bizarre...

Donald Trump Jr. has received both praise and criticism after posting a Thanksgiving video on Instagram.
Read more

A controversial, far-left state lawmaker in New Mexico who was previously told to “f*** off” by a member of his own Democratic Party announced that he will not seek re-election, according to a report.
Read more

Rep. Marjorie Taylor Greene (R-Ga.) was suspended from Twitter for 12 hours on Monday after she shared misleading claims about the coronavirus.According to a Twitter spokesperson, Greene was suspended for two tweet...
Read more

South Africans are now bracing for what they fear will be another hard lockdown, with many pandemic-weary businesses expressing little appetite for the crippling economic consequences of potential new restrictions.
Read more

China posted record a 4.36 trillion yuan trade surplus in 2021, according to Bloomberg calculations based on official data.
Read more

Women’s soccer in the U.K. received a major boost by signing a broadcast deal for the Super League, its flagship domestic tournament, with Comcast’s Sky Sports for the first time.
Read more

Peyton Manning says he was denied an interview with...

Hall of Famer Peyton Manning is regarded as one of the greatest quarterbacks in NFL history, but even he wasn’t able to land a one-on-one interview with New England Patriots rookie signal-caller Mac Jones.
Read more

NS&I scraps plans that would have seen an end to prizes being posted to winners.
Read more

New York Gov. Andrew Cuomo (D) said Thursday that he's "eager" to talk to state Attorney General Letitia James (D) in her probe over sexual misconduct claims against him but has not yet been interviewed as part of the inv...
Read more

"This case serves as a reminder that systemic discrimination and harassment remain significant problems that we as a society must tackle," the chair of the U.S. Equal Employment Opportunity Commission said.
Read more

Adams says Democratic Party has to be ‘radically practical’...