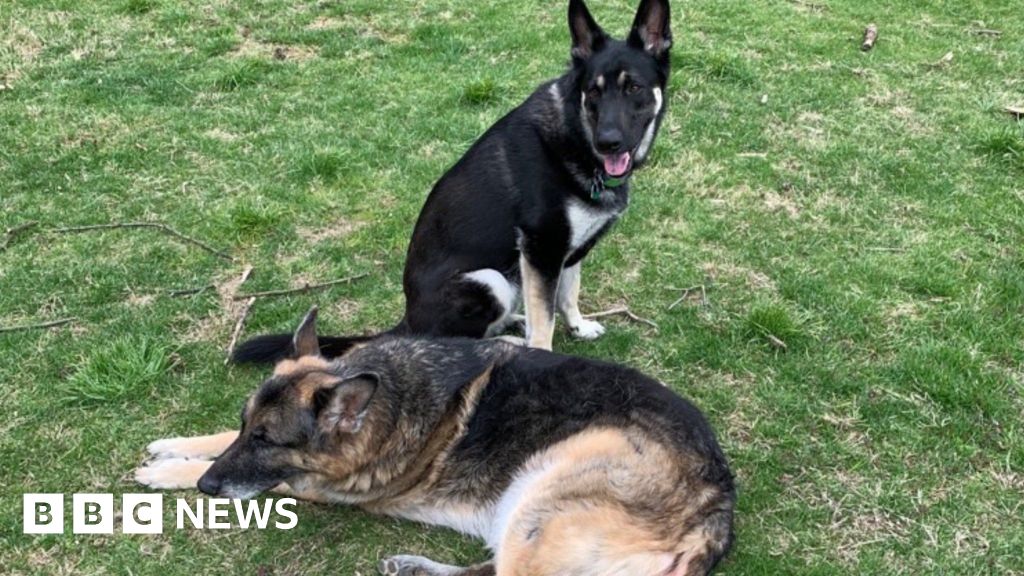 Joe and Jill Biden’s German shepherds have been removed from the White House after the younger dog, Major, reportedly bit a security agent.

According to US media, the pets have been sent back to the Biden family home in Wilmington, Delaware.

The Bidens adopted three-year-old Major in 2018. He became the first dog from an animal shelter to live in the White House.

Anonymous sources told CNN that Major had been jumping, barking and charging at White House staff and security.

Both dogs moved into the White House four days into Joe Biden’s presidency.

His wife, Jill, told The Kelly Clarkson Show last month she was focused on getting the dogs settled.

“They have to take the elevator, they’re not used to that, and they have to go out on the South Lawn with lots of people watching them. So that’s what I’ve been obsessed with, getting everybody settled and calm,” she said.

Sharing the limelight with their owners, the dogs appeared alongside the first lady in a public service announcement encouraging Americans to wear face coverings, and also gave their own Christmas message in December.

The White House has a long history with pets, although Donald Trump was the first president in more than 100 years not to have a dog. At a rally in Texas in 2019, he said he would “feel a little phony” about walking one on the White House lawn, plus he didn’t have the time.

Major is the first dog from a shelter to live in the White House, however President Lyndon B Johnson also had a rescue dog – a terrier mix named Yuki.

Yuki was found at a Texas petrol station by the president’s daughter, Luci, on Thanksgiving Day in 1966, according to the Presidential Pet Museum website, which compiles information on the White House pets. Yankees player takes himself out of lineup in wake...

A player for the New York Yankees who formerly played for the Minnesota Twins excused himself from Monday night's game following the fatal police shooting of 20-year-old Black man Daunte Wright during a police traffic sto...
Read more

On Jan. 6, 2021, a violent mob of rally attendees, fresh from hearing President Trump speak near the White House, marched to the Capitol, forced their way past barricades and a line of police officers and stormed the buil...
Read more

Harris was inside DNC on Jan. 6 when pipe...

The then-vice president-elect’s presence inside the building while a bomb was right outside raises sobering questions about her security that day.
Read more

Oklahoma is set to execute an inmate on death row in one week, despite the state's parole board expressing doubt about his guilt. Amanda Bass, a federal public defender, joined CBSN's Lana Zak to discuss the case of Julius Jones.
Read more

Jan. 6 Probe Is Finally Getting Serious

The House committee needs to stand up for democracy. Holding uncooperative witnesses in contempt is a good start.
Read more

More and more famous faces are dipping their toes in the political waters, and some Hollywood stars are ready to dive into the deep end.Olympic gold medalist and former “Keeping up With the Kardashians” star Caitlyn Jenner launched her campaign to...
Read more

How to pick for a quality jogging stroller

The U.S. Department of Education will revamp a program that provides loan forgiveness to government and nonprofit workers, the agency announced Wednesday.
Read more

Boil advisory lifted for all of Jackson, one month...

Shane Fuhrman, the mayor of Silverton, Colorado, announced at a trustee meeting last week that the Pledge of Allegiance will no longer be recited due to “direct and indirect threats,” prompting at least one trustee to challenge his ruling before attendees rec…
Read more

Former Secretary of State Mike Pompeo says he "regrets" that the Trump administration did not succeed in having North Korea give up its nuclear weapons.In an interview with a conservative podc...
Read more

Former President Donald Trump called for an immediate end to the debate over a commission to investigate the Jan. 6 Capitol riot on the eve that the House is expected to approve the plan."Republicans i...
Read more

Over the last few days, Lil Nas X has made several joke tweets and TikToks about him going to jail for his controversial Nike Satan shoes, but on Monday (July 19), he revealed that he’s definitely heading to court for it — in a new music video, anyway — as sh…
Read more

Four people are facing fines as high as $15,500 for incidents that included refusing to wear masks.
Read more

Craig Wright, a computer scientist who claims to be the inventor of Bitcoin, prevailed in a highly publicized trial Monday that will allow him to hold onto a hoard of Bitcoins worth tens of billions of dollars
Read more

New York prosecutors are reportedly looking into whether a former bodyguard to ex-President Trump received tax-free fringe benefits as part of his work with the Trump Organization....
Read more

The Westminster Kennel Club's annual dog show has been postponed due to the ongoing winter surge of COVID-19, ...
Read more

White House confirms new round of talks with Iraq...

The White House on Tuesday confirmed the United States and Iraq next month would hold strategic talks on relations between the two countries and the remaining U.S. troops in Iraq.
Read more

I Thought I Knew Harry Reid. I Was Wrong.

The pol I once scoffed at for embodying the worst of American politics turned out to be one of the most morally effective leaders the Democratic Party has ever seen.
Read more

The Senate Intelligence Committee is preparing for a highly-anticipated hearing Thursday with former FBI Director James Comey about his conversations with President Trump on the Russia probe. Democratic Sen. Joe Manchin joins "CBS This Morning" to discuss the…
Read more

Privately, they acknowledge that the Senate parliamentarian may have doomed their effort. Publicly, they're floating a new strategy.
Read more

CDC says N95 masks provide the most protection against...

Microsoft 365 customers are getting a handy new tool...

Microsoft is bringing a lightweight version of its Visio diagram software to Microsoft 365 users for free.
Read more

US politician Nancy Pelosi heads to Chorley, Lancashire for...

The Lancashire town is hosting a meeting of presiding officers - including the US Speaker of the House.
Read more

US to look at climate emissions from oil and...

His wife, Cindy Steinhardt, said he died Saturday at a hospital in Tampa, Florida.
Read more

Colombia midfielder James Rodriguez completes a move from Everton to Qatari side Al Rayyan for an undisclosed fee.
Read more

Yorkshire are suspended from the right to host England matches following the racism allegations made by former player Azeem Rafiq.
Read more

The five best dishes to make in a blender...

Thinking about purchasing a blender but not sure what you’ll actually use it for? Here’s a look at the dishes these versatile appliances can make.
Read more

Sumitomo Mitsui CEO to Weigh Targets After Year of...

With coronavirus cases rising throughout Iowa and around the nation, health experts are becoming increasingly worried about next month’s Iowa State Fair, which will bring more than 1 million people to Des Moines
Read more

Sepsis: Girl, 4, would have been saved with diagnosis...

G’day from Sydney. In this week’s dispatch, we examine the risks as out-of-practice pilots return to the cockpit, and ponder the future of smashed avocado on toast.
Read more

The levees, floodwalls and floodgates that protect New Orleans held up against Hurricane Ida’s fury, but costly upgrades to the city's flood protection system couldn't spare some neighboring communities from the rising water
Read more

Private Anthony Bartlett was found dead after a suspected overdose in July 2001, it has emerged.
Read more

‘There were no avatars like me so we made...

Thousands of centrifuges were taken out in the deliberate blast deep underground, the official says.
Read more

Joey Gallo hit a two-run shot in the 10th inning for his second homer of the game, and the New York Yankees outlasted the Chicago White Sox 7-5 in another back-and-forth thriller Saturday night.
Read more

Liverpool's Alex Oxlade-Chamberlain takes on a MOTDx skills challenge with Liam MacDevitt and ends up owing the goalkeeper, Jack, a pair of Alisson's gloves.
Read more

The U.K. has reset its hunt for a candidate to chair technology and media regulator Ofcom following concerns that lobbying by technology companies may have influenced the recruitment process, according to a person familiar with the matter.
Read more

Democrats vow to go ‘bold’ — with or without...

Democrats are warning they won't tolerate GOP stonewalling as they try to make good on their pledge to enact a "bold" agenda and avoid Obama-era missteps.
Read more

These 15 Colleges Have the Most Unique Mascots

We celebrate the weird and wonderful world of mascots at U.S. colleges.
Read more

Iran's outgoing President Hassan Rouhani on Wednesday said that the country had the ability to reach the 90 percent uranium enrichment level needed to manufacture nuclear weapons, though the government ...
Read more

After a month away, we head to Austria for a two-parter. Here's how to get a MotoGP live stream of the Styria Grand Prix, no matter where you are.
Read more

Stocks inch up as details emerge on Biden’s infrastructure...

Austria forward Marko Arnautovic says he is "not a racist" after a heated goal celebration during Sunday's Euro 2020 win over North Macedonia.
Read more

The results of China's seventh census revealed that the country's population has dropped precipitously. In response, the Chinese Communist Party gathered an emergency meeting of the Politburo.
Read more

Pop star Shakira is just one of the city's residents to have had problems with the animals.
Read more

To reach the unvaccinated, state officials urge Biden to...

The officials say packaging Covid shots in smaller vials would help, but administration officials believe that poses too many challenges for now.
Read more

Schumer and McConnell jostle over size of debt limit...

Senate Majority Leader Charles Schumer (D-N.Y.) and Senate GOP Leader Mitch McConnell (R-Ky.) are haggling over the size of a short-term debt limit increase, as they try to lock in an agreement that would punt...
Read more

The NHL took a hard pass on the Beijing Olympics, citing uncertainty over the spread of COVID-19 and marking the second straight Winter Games the world's best players will miss
Read more

"Cautious optimism is perhaps the best way to look at this," Manuel Ascano Jr., a biochemist at Vanderbilt University who studies viruses, told the AP.
Read more

It is not expected to get any Republican votes.
Read more

Coal Shortage in China Means Higher Prices for the...

Jussie Smollett, on Trial for Hate-Crime Hoax, Is the...

The lawyer told the jury that the alleged attackers were "going to lie to your face."
Read more

Frederik Andersen made 33 saves for his first shutout with Carolina, giving the Hurricanes their best six-game start in franchise history with a 3-0 win over the Boston Bruins on Thursday night.
Read more

Justin Bieber Returns To The VMAs For His First...

Apple Inc (AAPL.O) said on Wednesday it has removed from its App Store several knockoffs of Wordle, a website-only word game that has seen a recent surge in popularity thanks to celebritie…
Read more

Only one New York governor has ever been impeached. Some lawmakers hope...