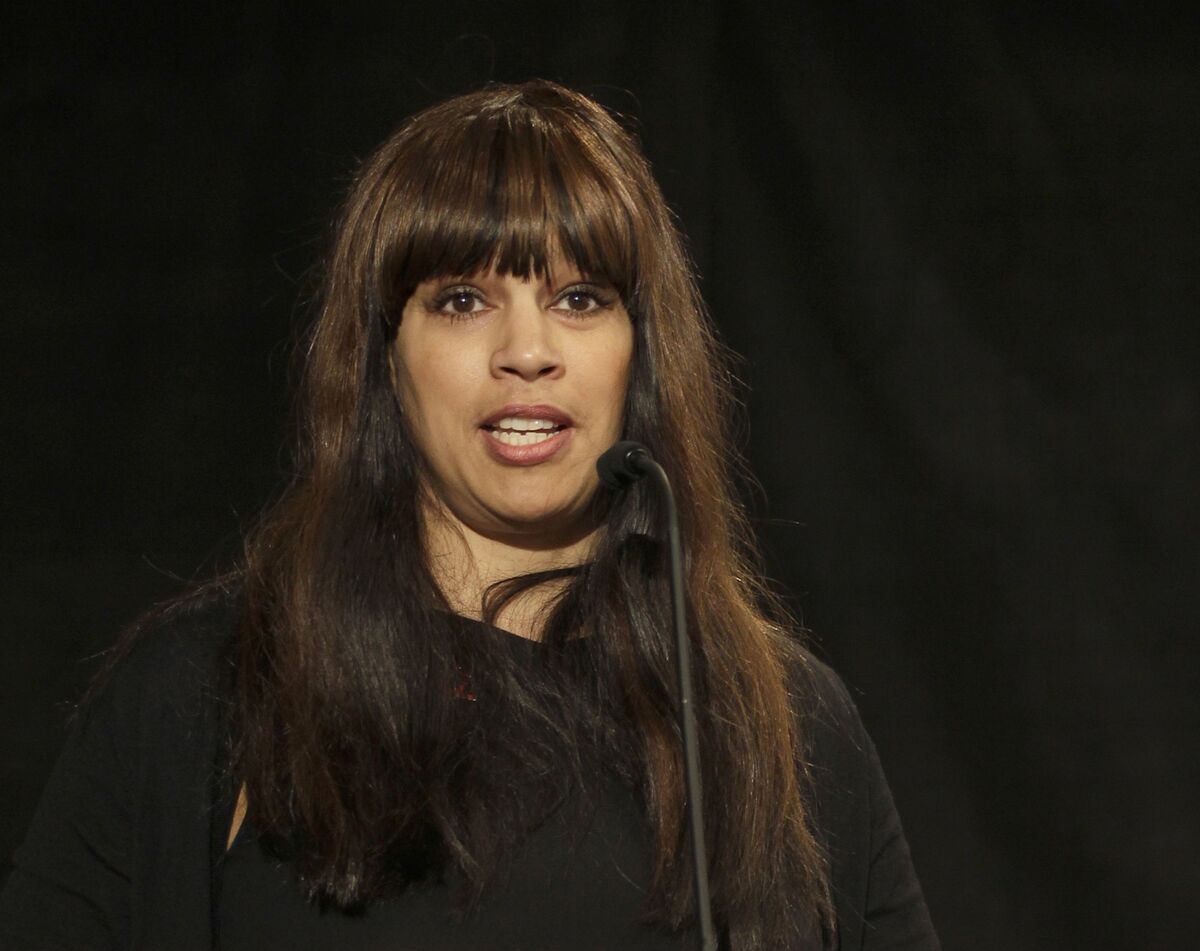 Nike Inc. named a replacement for a top executive who resigned after a report detailing her sons lucrative business reselling sneakers.

Sarah Mensah takes over as vice president and general manager of Nikes North American operations, effective immediately, the company said in a

statement Tuesday. The role includes overseeing sales, marketing and merchandising in the region for the worlds largest athletic-wear company. She had worked as a senior executive at the NBAs Portland Trail Blazers before joining Nike in 2013.

Mensah replaces Ann Hebert, an employee of more than 25 years who abruptly left this month, just days after Bloomberg Businessweek

reported on her 19-year-old son, Joe. Known to his customers as West Coast Joe, he flips hundreds of thousands of dollars in sneakers for profit each month and used a credit card in his mothers name.

Hebert disclosed information about her sons business to Nike in 2018, according to the report. The company has said that the executive didnt violate company policies and there was no commercial affiliation between Nike and the resale business.

Following her exit, a Nike representative said Hebert made the decision to leave.

Who is Aafia Siddiqui, the federal prisoner at the center of...

A closer look at the case of Aafia Siddiqui, jailed in... Who is Aafia Siddiqui, the federal prisoner at the center of... A closer look at the case of Aafia Siddiqui, jailed in...

The group say they will reschedule the final four UK dates of its reunion tour.
Read more

White House adviser sees ‘a lot of momentum’ for...

Activists protested the reopening of the street corner where George Floyd was killed by police.
Read more

A progressive environmental group plans to focus its advocacy around President Biden's proposal to create conservation and reforestation jobs, according to a strategy memo obtained by The Hill. T...
Read more

Amid the surge of coronavirus cases across the U.S., numerous churches have canceled in-person Christmas services, disappointing pastors and churchgoers.
Read more

A flight carrying 1.24 million doses of AstraZeneca vaccine from Japan has touched down in Taiwan’s Taoyuan International Airport to help the island fight its largest outbreak since the pandemic began
Read more

The draw on Friday followed a jackpot win last week of more than half a billion dollars, one of the largest ever sums paid out.
Read more

The Biden administration will suspend controversial leases issued under the previous administration for drilling at the Arctic National Wildlife Refuge, according to ...
Read more

Scott Quinn adds his name to the list of Scottish Paralympic medallists at Tokyo 2020 after finishing third in the SB14 100m breaststroke.
Read more

MicroStrategy Inc. built up its Bitcoin cache with a new $10 million purchase, adding to Michael Saylor’s bet on the digital currency amid the latest wave of gyrating prices.
Read more

Trump pushes back on Bolton poll

Former President Donald Trump is pushing back on a poll commissioned by his former national security adviser showing his grip on the GOP loosening in his post-presidential life.In a statement issued through the for...
Read more

MacCallum pushes back on NIH chief denying he rejected...

President Biden expressed condolences to the family of a Capitol Hill police officer who was killed on Friday and sought to honor him and others at the Capitol, ordering the White House flags to be flown at half-staff....
Read more

What Time Is Yom Kippur Over? Jewish Day of...

Along with the sun setting, the conclusion of Yom Kippur is marked by a long shofar blast at the end of services.
Read more

Aston Villa manager Steven Gerrard jokingly tells BBC Sport's Juliette Ferrington that reporters would be 'in for a long afternoon' if they were trying to catch him out on speculation over the future of Barcelona playmaker Philippe Coutinho.
Read more

Sale second-rower JP du Preez will miss the rest of the season after being banned for three weeks.
Read more

Drive to the Close with Michael Sheldon (Audio)

I know I am dying," George told Guy over tea. "I don't know how many years I have left, but before I go, I'd like to do a creative project with the Beatles music. Do you think Cirque would like to be involved?"
Read more

The 24 July trilogy bout between Tyson Fury and Deontay Wilder is still going ahead despite a Covid-19 case in the Briton's camp.
Read more

China's leaders are easing limits on how many children each couple can have, hoping to counter the rapid aging of Chinese society
Read more

Inside the mind of an NFL kicker

Jon Wertheim speaks with Ravens kicker Justin Tucker and former players about the position everyone wants in practice, and nobody wants in the last three seconds of a game.
Read more

European shares fell on Wednesday as worries about rising inflation and the Delta variant of the coronavirus hit economically sensitive sectors, even as technology stocks tracked an overnight surge in U.S. tech stocks to record highs.
Read more

Search on after Navy helicopter crashes in ocean off...

One crew member rescued and five unaccounted for after chopper went down during routine flight off aircraft carrier, officials say.
Read more

Joe Concha reacts to most unbelievable headlines of 2021:...

A panel at the Centers for Disease Control and Prevention recommend the Pfizer-BioNTech coronavirus vaccine booster shots for people 65 years old and older, along with those at high risk of severe COVID-19.
Read more

As unfortunate as the HELP Committee's decision to give the PRO Act a hearing is, there is still time for senators to think twice about supporting this seriously misguided proposal.
Read more

Pope heads to Orban’s Hungary at start of 4-day...

About 75% of primary teachers are expected to strike as they complain about confusing testing rules.
Read more

The vaccination program in Europe has sunk further into disarray. The countries that are suspending the use of the AstraZeneca Plc. shot are rising. Germany, France, Italy and Portugal are just the latest countries to pause the use of the vaccine pending a fu…
Read more

A former athletics official at the University of Southern California pleaded guilty Friday to her role in the college admissions bribery scandal, legal filings
Read more

Texas voting standoff jeopardizes pay for up to 2K...

More than 2,000 Texas legislative staffers are caught in the political crossfire in the standoff over voting restrictions
Read more

Disney on Broadway Stars Create Magic During Visit to...

Although Broadway is closed, we’re bringing you a special dose of theatrical magic from Walt Disney World Resort as several of the brightest Disney on Broadway stars visit and enjoy the parks!
Read more

The structure at Addenbrooke's in Cambridge was blown into the air as the USAF Osprey took off.
Read more

The source of the unknown substance has been "isolated" and pipes are being cleaned to remove it.
Read more

Everyone’s Invited: School abuse claims could be the ‘next...

A police helpline is to be set up for pupils to report complaints, after claims posted on website.
Read more

The glow from the lava could be seen 20 miles away.
Read more

While many people are anxious about Brood X's emergence across the eastern United States, pet owners also need to prepare for how their cats and dogs will react to the sudden, abundant source of potential overstimulation and overeating possibilities.
Read more

Putin: Relationship with U.S. has ‘deteriorated to its lowest...

Biden and Putin are scheduled to meet face-to-face on June 16 in Geneva, Switzerland.
Read more

A winter storm that hit the Midwest on Saturday made Chicago the worst place in the country for travelers.
Read more

Amazon.com Inc. is developing a bevy of new devices and services as it delves into additional markets, including a larger Echo with a wall-mountable screen, a TV sound bar, more advanced car technology and wearable gear.
Read more

"The people don't want to hear that," the ex-president said. "That's why they tune out."
Read more

Africa’s most populous city is battling floods and rising...

Cars and houses submerged in water, commuters wading through buses knee-high in floods, and homeowners counting the cost of destroyed properties.
Read more

G7 summit: How much carbon did Boris Johnson’s flight...

Some people have criticised the UK prime minister for travelling by plane to the G7 summit.
Read more

All Britney Spears wants is to be the mom of a little girl – a dream that’s been blocked because she’s imprisoned in a “corrupt and evil” conservatorship, a former boyfriend said after hearing her impassioned testimony on Wednesday.
Read more

‘I was embarrassed:’ Britney Spears apologizes for lying to...

“I apologize for pretending like I’ve been ok the past two years … I did it because of my pride and I was embarrassed,” Spears wrote.
Read more

A New York prosecutor is expected to seek an indictment against Robert Durst over the death of his ex-wife Katherine Durst, according to multiple ...
Read more

Borderland’s Tiny Tina is finally getting her own game...

Tiny Tina’s Wonderlands is a new spin-off from Gearbox Software, which takes the series into a fantastical new direction.
Read more

The Taliban on Tuesday asked the U.S. to cease drone patrols in Afghan airspace, arguing they violate an agreement made last year between the group and the Trump administration, The Washington Post reported. The deal between the Trump ...
Read more

According to a top analyst, the PSVR 2, Oculus Quest 3, and Apple VR headsets could all launch in 2022.
Read more

England midfielder Jude Bellingham is fined 40,000 euros after being found guilty of unsportsmanlike behaviour for criticising a referee.
Read more

Lori Loughlin made a rare appearance on her daughter's social media. Olivia Jade shared a video featuring Loughlin attempting to do the "jerk" dance.
Read more

Only 38 Percent Back Biden’s Handling of Afghanistan in...

A majority of Republicans and Democrats also think that U.S. troops should leave Afghanistan after evacuating all Americans and Afghan allies.
Read more

The Washington Wizards beat the Indiana Pacers to book their place in the NBA play-offs, while Stephen Curry is among the nominees for Most Valuable Player.
Read more

Celebrity birthdays for the week of Aug. 22-28

The men fired dozens of rounds into Evaldo dos Santos Rosa's car, killing him and a bystander.
Read more