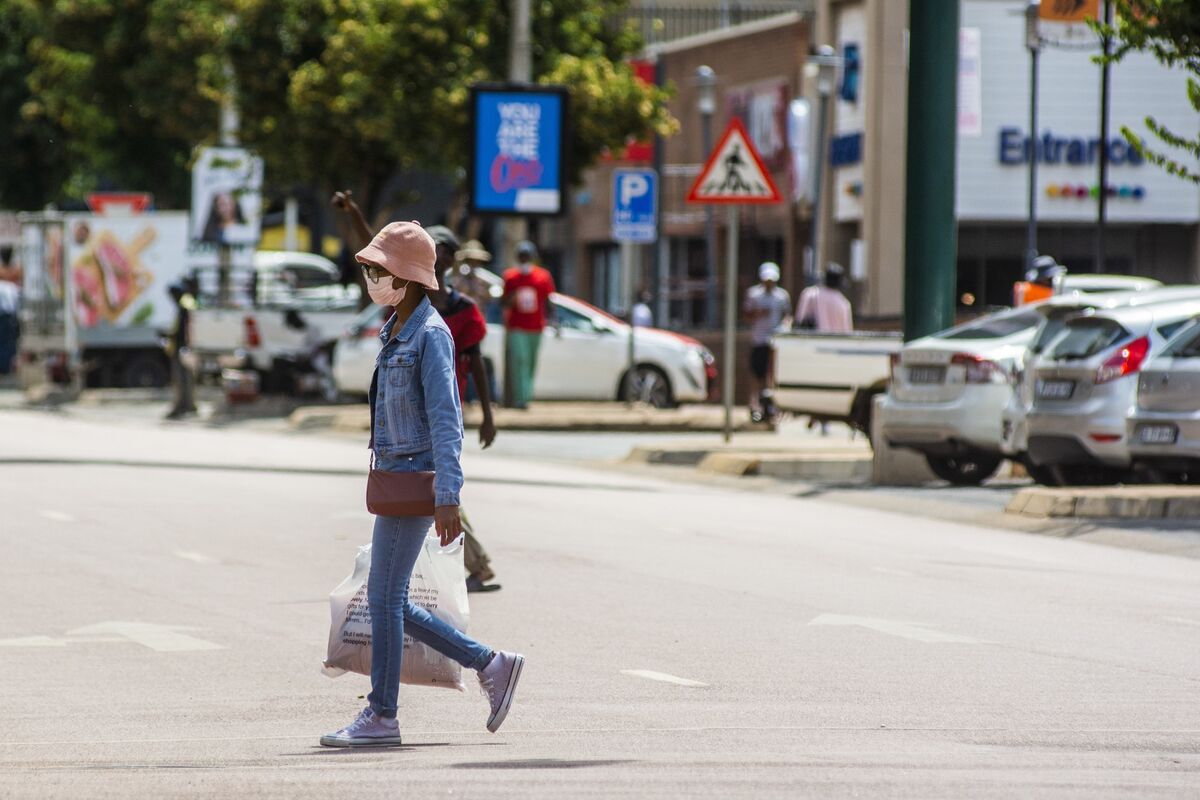 A pedestrian wearing a protective face mask crosses the street in Pretoria.

South Africas economy contracted the most in a century in 2020 as restrictions to curb the spread of the coronavirus pandemic ravaged output and disrupted trade.

Gross domestic product shrank 7%, compared with a 0.2% expansion in 2019, according to a report released by Statistics South Africa Tuesday in the capital, Pretoria. Thats the biggest decline since 1920, when output dropped by 11.9% during the two-year post-World War I recession, central bank data shows.

GDP expanded an annualized 6.3% in the three months through December from the previous quarter, following a revised 67.3% increase in the three months through September. The median estimate of 15 economists in a Bloomberg survey was for a 5.6% increase. GDP contracted 4.1% year-on-year in the fourth quarter, which means output is still down from 2019.

With assistance by Simbarashe Gumbo The US rapper had been at Fashion Week and was with NBA star James Harden when he was arrested.
Read more

Welcome to Wednesday's Overnight Health Care. In another change to the Tokyo Olympics, the medal ceremonies will feature winning athletes placing ...
Read more

Former football star Herschel Walker has a wide, early lead in the GOP primary to take on Sen. Raphael Warnock (D-Ga.) in Georgia next year, according to a poll that shows him dominating the rest of the field by a nearly...
Read more

Sen. Joni Ernst (R-Iowa), the only woman in Senate Republicans' elected leadership team, compared efforts to oust Rep. Liz Cheney (R-Wyo.) from leadership to "cancel culture," and argued that the party should b...
Read more

The House is expected to pass a Republican bill Thursday, cutting taxes on businesses and many individuals. One new poll finds 52 percent of Americans disapprove of the GOP tax plan. Nancy Cordes reports.
Read more

Tinder swipes right to partner with Netflix for its...

Netflix feels the association with Tinder will help it keep the show as real as the times today.
Read more

President Biden is walking a fine line with Fox News, needling it this week on the subject of vaccine misinformation but avoiding an all-out war with a cable news network. Biden has yet to sit down with Fox News for an interview, something that...
Read more

The parents of Kristin Smart sued the father of the murder suspect, saying he caused them "severe emotional distress" after allegedly removing her body from his home.
Read more

The Venezuelan-Columbia bordered reopened after years of closure on Tuesday. The main border crossing between the countries was opened after Venezuelan Vice President Delcy Rodriguez...
Read more

Recently surfaced video from a July political fundraiser in Alabama featuring Rep. Marjorie Taylor Greene (R-Ga.) showed attendees cheering when the GOP lawmaker pointed out that the state had one of the lowest COVI...
Read more

Lawmakers on the House Homeland Security Committee struck a deal to create a bipartisan commission to investigate the January 6 Capitol riot, breaking a months-long logjam about how to structure the independent panel.
Read more

NIH funding studies into reports of abnormal menstruation after...

The National Institutes of Health (NIH) announced this week that it was awarding grants to five research institutions to look into reports from some women of irregular or missing menstrual periods after getting vacc...
Read more

Andy Preston says he found out a year ago after his son was also diagnosed.
Read more

This latest incident adds to the increasing crime around the city that has become a major issue in the upcoming mayoral race.
Read more

The agency will also allow some immunocompromised children as young as age 5 to get an additional dose.
Read more

A California state park has been renamed to reflect the name used by the Indigenous Yurok people.The California State Park and Recreation Commission ...
Read more

The department's civil rights office will examine whether bans in Iowa, Oklahoma, South Carolina, Tennessee and Utah violate the rights of students with disabilities.
Read more

Watch highlights as Championship side QPR come from behind in extra time before beating League One leaders Rotherham 8-7 on penalties in the FA Cup third round.
Read more

The Texas senator says he wants to assess what Israel needs from the U.S. for its "national security."
Read more

Emmanuel Dennis once dreamed of becoming a priest but could the prolific striker prove to be Watford's saviour this season?
Read more

President-elect Donald Trump was named TIME's Person of the Year, but here are the others who were close contenders.
Read more

Biden to speak Monday on Afghanistan

President Biden will return to the White House on Monday and deliver remarks on the situation in Afghanistan.Biden was slated to stay at the presidential retreat at Camp David through Wednesday, but he will come ba...
Read more

Asos CEO Beighton to Step Down as Sales Growth...

Sen. Bernie Sanders (I-Vt.) and nine Democratic senators are calling on President Biden to support a waiver of COVID-19 vaccine patents at the World Trade Organization, a move they say is needed to ensure access to vaccin...
Read more

After Naomi Campbell announced she had become a mother, women talk about having babies later in life.
Read more

"It is not enough to say, we're all going to be friends—kumbaya," Scott Stringer told Yang during the debate. "We need a mayor with experience."
Read more

President Biden's approval is hovering just above 60 percent more than four months into his presidency, buoyed by his handling of the coronavirus pandemic and improving views of the U.S. economy, according to a new Harvar...
Read more

New York Times in discussions to acquire The Athletic:...

Find gifts the grandparents in your life don't already own from Sephora, Nordstrom​, Uncommon Goods and more
Read more

A US federal appeals court on Wednesday upheld a Texas law restricting a second-trimester abortion procedure, overturning a lower court's decision that had blocked the measure from going into effect.
Read more

Three of the Big Ten's nine NCAA tournament teams are in the South Region, including the Wisconsin Badgers.
Read more

At long last, fans got to see an update on FromSoftware's exciting new adventure.
Read more

Captain Cristiano Ronaldo doubles Portugal's lead to 2-0 against Hungary, converting a penalty after Rafa Silva was brought down in the box, During Euro 2020.
Read more

The landmark museums in the US capital are beginning to once more open their doors to the public.
Read more

Sri Lankan and Indian naval boats are struggling to put out the eight-day blaze on the X-Press Pearl.
Read more

Family of California man who died after he was...

The family of Mario Gonzalez Arenales, a Northern California man who died after he was restrained by police officers in April, has filed a wrongful death claim against the city of Alameda alleging the officers detained Gonzalez without reasonable suspicion an…
Read more

Azeem Rafiq should be "praised" for his bravery and "should never have been put through" the Yorkshire County Cricket Club racism scandal, says the club's new chair Lord Patel.
Read more

Remembering Mary Tyler Moore, who opened the door for...

Jamie Lynn Spears shared photos of herself on Instagram days after asking to be left "alone" regarding Britney Spears' conservatorship drama.
Read more

A high school sports announcer apologized for making racists comments at a game after a basketball team kneeled for the national anthem.
Read more

This article is part of CNN Underscored's wall-to-wall coverage of Amazon Prime Day. To find all of our coverage, click here.
Read more

An attorney for the Illinois teen accused of killing two men and wounding a third during a protest in Wisconsin last summer, says he doesn’t know who donated to his client’s defense and therefore cannot produce any names
Read more

13-year-old Tristyn Bailey, a Florida cheerleader, was allegedly stabbed 114 times, and the teen suspect in the murder will be charged as adult.
Read more

Thailand’s daily coronavirus cases have surpassed 1,500 to set another record, sparking concerns the pandemic may spiral out of hand
Read more

Manchester, England (AP) -- It took only seven minutes of the Manchester derby to be in no doubt about the parlous state of United.
Read more

Our Poco F3 GT review explains how the brand’s first flagship in India in three years is as exciting as the original.
Read more

Fred West: Who was he and what did he...

Police begin to excavate a cafe for a suspected victim of the serial killer, but who was he?
Read more

James Levine, who polished New York’s Metropolitan Opera into a world-renowned institution during four decades as conductor and director until he was fired for sexual harassment, has died. He was 77.
Read more

The youngest daughter of former Thai Prime Minister Thaksin Shinawatra, whose ouster by a military coup in 2006 triggered years of political instability, has taken a post with a party closely associated with her father
Read more

Individual investors say they have been waiting too long for more aggressive steps by regulators to curb short selling by Wall Street powerhouses.
Read more

France is sending a second Statue of Liberty to...

New Yorkers have a surprise gift to look forward to for this Independence Day: a second Statue of Liberty sent by France. This new bronze statue, nicknamed the "little sister," is one-sixteenth the size of the world-famous one that stands on Liberty Island. O…
Read more

Job openings in London’s finance industry almost trebled in June from a year ago as the U.K.’s imminent exit from Covid-19 restrictions stokes optimism about the economy.
Read more

Former England captain and BBC Sport columnist Alan Shearer says there are reasons for the Three Lions to be optimistic about making it all the way to the final of Euro 2020 - if they get past Germany in the last 16.
Read more

In a livestream for The Sims 4, the team shows off a new system that will allow you to pick your Sims' pronouns.
Read more

Boris Johnson says not to go but some travel firms are refusing refunds for those destinations.
Read more

A nine-year-old girl and a 10-year-old boy were injured in Bushy Park, south London.
Read more

Bank of Singapore's Lee: Time to Reposition Some Portfolios