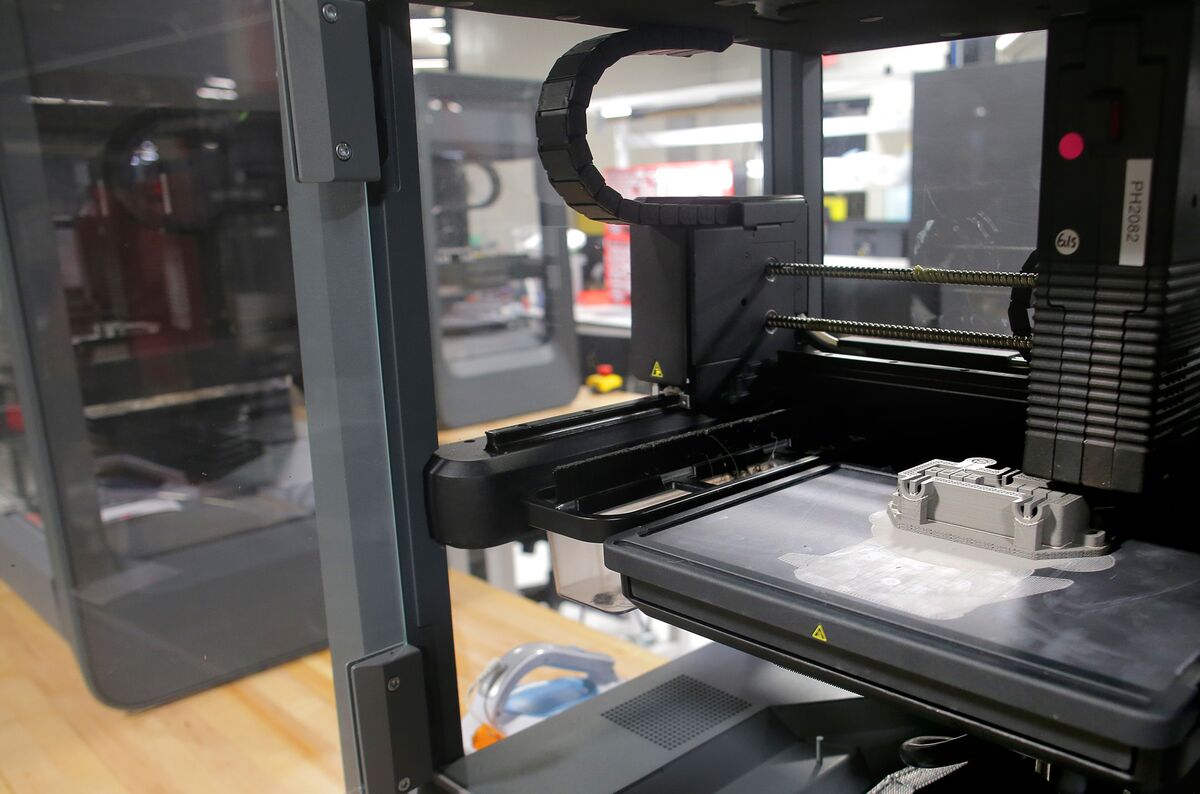 A 3d printer at the Desktop Metal headquarters in Burlington, MA.

SLM Solutions Group AG about a potential takeover before putting the plans on ice, according to people familiar with the matter.

Desktop Metal signaled its interest in making an all-stock bid valuing the German company at around 600 million euros ($713 million), according to the people. The two firms held some informal talks about the potential offer of roughly 30 euros per share before Desktop Metal decided not to proceed, the people said, asking not to be identified because the information is private.

The decline in Desktop Metals share price over the past few days has made it harder to move ahead with a transaction, the people said. It wasnt immediately clear whether negotiations could resume in the future.

A spokesperson for SLM declined to comment. A representative for Burlington, Massachusetts-based Desktop Metal didnt respond to a request for comment.

Elliott Management Corp. is the largest shareholder in SLM with a 28% stake, according to data compiled by Bloomberg. The activist investment firm

Trine Acquisition Corp. It currently trades at about 36 times forecast 2021 revenue, while SLM is valued at 4.1 times forecast sales, according to data compiled by Bloomberg.

The powder bed fusion technology used by SLM is geared toward production of high-performance and high-value components. Its seen as complementary to Desktop Metals binder jet process, which is more suitable for making low-cost, high-volume metal parts.

SLM, based in the northern German city of Luebeck,

said in February that it expects to report its revenue rose 24% last year to 61 million euros. Its forecasting a loss before interest, taxes, depreciation and amortization of about 14.5 million euros to 15.5 million euros. SLM announced a new model in November, dubbed the NXG XII 600, which got a boost recently when the company

signed a memorandum of understanding for delivery of five machines. In New Hampshire, a graduate of an exclusive prep school who thought he'd be entering Harvard this fall faces up to 11 years in prison for the sexual assault of a 15 year old girl. Owen Labrie was convicted on Friday of misdemeanor charges in the assault, whi…
Read more

Weekly COVID-19 vaccination uptake lagged among younger adults by late May, with those aged 18-29 claiming the lowest coverage compared to older age groups, according to a new report from the Centers for Disease Control and Prevention (CDC).
Read more

A wildfire is burning in California. And Oregon. And Washington. And Arizona. Historic drought and climate change play a major role in the 2021 fire season.
Read more

WATCH: Racism in America keeps rearing its head and...

Turkey will finally ratify the Paris climate agreement, five years after initially signing it, according to its parliament's official Twitter account.
Read more

Only about 46 percent of the U.S. population is vaccinated, and the number of doses administered has fallen by almost 300,000 per day since June 7, according to the Centers for Disease Control and Prevention.
Read more

Recriminations have followed the July floods and the alleged failure to alert residents.
Read more

The U.K. reported its highest daily death toll from coronavirus since the beginning of March, adding to fears that tighter restrictions might be needed this winter. The number of people hospitalized is also at the highest since that period.
Read more

The best projector of 2021 has a hefty discount...

You can save thousands on the Samsung Premiere 4K ultra-short throw projector in this unbeatable early Black Friday deal.
Read more

The best places to live in the U.S.

Did your city make the cut?
Read more

Fans have been warned to stay at home as the Celtic v Rangers fixture goes ahead in Glasgow.
Read more

The Horn of Africa Heads Toward Apocalypse

Can America save Ethiopia, Tigray, or Eritrea? The post The Horn of Africa Heads Toward Apocalypse appeared first on The American Conservative.
Read more

Plane at bottom of California lake is not from...

A small plane recently spotted by sonar at the bottom of a Northern California lake is not the wreck of an aircraft that disappeared into the water after a midair collision in 1965, authorities said Wednesday.
Read more

Japan Mudslide Devastation Caught on Video With Over 20...

The Prime Minister of Japan Yoshihide Suga has called an emergency meeting of the country's cabinet.
Read more

The foreign minister of the Mediterranean island of Cyprus is urging the new Lebanese government to implement reforms quickly, in order for the international community to unlock aid to crisis-hit Lebanon
Read more

CVS Health Corp. said earnings and sales this year will be at the high end of its forecast and announced plans to buy...
Read more

Twenty One Pilot Get Lost (And Found) At Sea...

Twenty One Pilots brave the raging seas for a stormy take on their dance-pop tune 'Saturday' live at the 2021 MTV VMAs.
Read more

Former President Trump lambasted President Biden over his chaotic withdrawal from Afghanistan, saying the Taliban's stark change in behavior with the change in administrations proves the issue was with the person not the plan.
Read more

Sinema to hold fundraiser with groups opposed to social...

Sen. Kyrsten Sinema (D-Ariz.) is reportedly scheduled to hold a fundraiser this week with business groups opposed to the $3.5 trillion budget reconciliation package being crafted by her party. Si...
Read more

Biden: Pathway to citizenship in reconciliation package ‘remains to...

President Biden on Sunday said it "remains to be seen" if a pathway to citizenship will be included in the Democrats' forthcoming reconciliation package.Biden, upon arriving back at the White Hou...
Read more

Your Weekend Reading: The Mental Health Hazards of Returning...

Steven Gerrard hopes he can keep veteran Allan McGregor at Ibrox for another year after a "world class" save keeps Rangers on track for the Europa League quarter-finals.
Read more

Broadway is coming back to life after an 18-month hiatus during the pandemic. Four big shows are returning at full capacity. Jamie Wax shares more.
Read more

Bajaj Chetak electric scooter will now become more premium and will now be available in Hyderabad and Chennai apart from Pune and Bangalore.
Read more

Graham says he owns AR-15 to protect his home...

Sen. Lindsey Graham (R-S.C.) owns an AR-15 for home defense, he revealed on "Fox News Sunday" this week while detailing a scenario in which he would have use the weapon to defend against gangs of looters.During an...
Read more

Germany: Flight home forced to stop in Edinburgh on...

The Swiss bank's risk chief is leaving after it revealed the fallout from two major clients.
Read more

Liverpool left-back Andy Robertson signs a new deal with the club which runs until the summer of 2026.
Read more

The suicide bombing in Kabul, Afghanistan, and the United States's air strike against ISIS-K in the region are expected to dominate this weekend's Sunday shows circuit. ...
Read more

Republicans in Alabama vote today in a closely-watched Senate primary. President Trump tweeted his support for the state's senator, Luther Strange, who was appointed to replace Jeff Sessions when he became attorney general. His challenger, Roy Moore, is backe…
Read more

National Archives: Meadows may not have stored all Trump-era...

The acknowledgment comes amid his clash with the committee investigating the Jan. 6 Capitol riot.
Read more

The Fourth Plinth in Trafalgar Square is home to a rolling commission of artworks.
Read more

Talented Cast Excited to Bring Back Epic Stunts and...

Are you ready for that edge-of-your-seat suspenseful feeling you’ve come to love at Disney’s Hollywood Studios? Well, get your hats and sense of adventure ready, because the SPECTACULAR return of Indiana Jones to Walt Disney World Resort is just days away!
Read more

Britons can finally travel. But no one knows where...

After enduring months of lockdown, travel restrictions and unseasonably bad weather, people in the UK were finally given permission to head overseas for a vacation this week. It prompted an online rush to find flights, hotel rooms and sunshine.
Read more

Brazil is in talks to buy up to 150 million doses of the Pfizer (PFE.N) COVID-19 vaccine for next year, according to a document sent by the Health Ministry to a Senate inquiry on Thursday.
Read more

White House waiting for more details before committing to...

Israeli Prime Minister Naftali Bennett on Sunday blamed the government of Lebanon for the recent rocket attacks fired from within its borders, even if Hezbollah was the group that ultimately fired the rockets, ...
Read more

Gray wolf may be re-listed as endangered after Trump...

The Interior Department will review the Endangered Species Act (ESA) status of the American gray wolf after the Trump administration delisted it as endangered, the department announced Wednesday night.In a statemen...
Read more

A bunch of sports fans are about to put...

Watching illegal streams online puts sports fans at risk of being infected with malware or even worse, having their identities stolen.
Read more

On patrol with the PCs trying to make Croydon...

New town centre patrols are being introduced in London to get more officers out on foot.
Read more

The Japanese government will start investigating how Apple Inc. and Alphabet Inc.’s Google deal with Japanese smartphone makers, which could lead to tightening antitrust regulations, the Nikkei newspaper reported Sunday, without saying where it got the inform…
Read more

A new report adds to earlier evidence that Apple suppliers are shipping out the new 27-inch iMac Pro with a mini-LED display to manufacturers.
Read more

The Florida group home -- and the juvenile justice system -- are now in the spotlight.
Read more

In Brazil, 10 people were killed when part of a cliff collapsed onto leisure boats. Another 32 were injured on the lake in the southeast part of the country. CBS News' Rylee Carlson has more.
Read more

Hurricane Ida: US Coast Guard ready to move in...

The U.S. Coast Guard says Hurricane Ida has gotten so bad that it cannot deploy resources into the area but is ready to send them the moment conditions permit.
Read more

Duncan Scott becomes the first British swimmer to win three medals at a single Olympic Games since 1908 with a second Tokyo silver as Jemma Reekie eases through in the 800m.
Read more

When the car performance isn't as dominant as it once was, the Hamilton factor keeps Mercedes on top.
Read more

The human rights chief of the United Nations is calling on countries to take more action to halt discrimination, violence and systemic racism against individuals of African descent worldwide and "make amends" to the...
Read more

Americans on edge as COVID complacency causes confusion and...

CBS News senior national correspondent Mark Strassmann reports on the latest in the country's battle against the coronavirus.
Read more

Twitter is testing a feature that will disable cropping on images that appear on the timeline, which is sure to be a boon for artists.
Read more

McConnell doubles down to pressure Republicans, asking for ‘a...

In the last 24 hours, Senate Minority Leader Mitch McConnell has ramped up the pressure on his GOP Senate colleagues to oppose a bill creating a January 6 commission, according to two Republicans familiar with his effort.
Read more