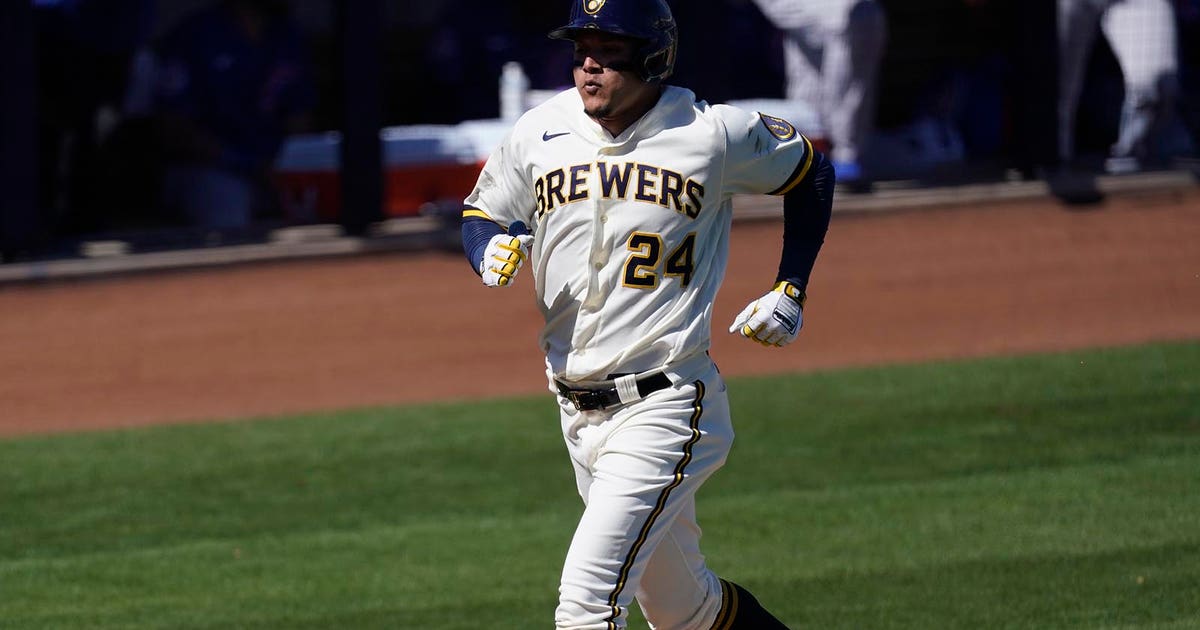 Brandon Woodruff took the mound for his first start of 2021 Grapefruit League play, but by the time the final pitch had been thrown Monday, the bats stole the storylines.

Woodruff retired the Angels in order in the first inning, but ran into trouble in the second when Anthony Rendon and Justin Upton both went yard.

Milwaukee brought four runs across in the first inning, getting started with an RBI single by Garcia. The Brewers scored three runs apiece in the fourth and sixth innings, boosted by a two-run triple by Milwaukee prospect Mario Feliciano to claim the lead for good.

Los Angeles clobbered five home runs — two by Upton — but came up empty in the seventh inning as Brewers left-hander Angel Perdom earned the save.

The Brewers (5-3) return to the field at 2 p.m. Tuesday to host the San Francisco Giants. The game will be televised on FOX Sports Wisconsin. 5 ways to celebrate Betty White on her 100th birthday

I don’t care if gaming chairs suck, I’m not buying a Herman Miller

A bipartisan group of senators said on Saturday that U.S. allies were worried lawmakers would not be able to pass its annual defense policy bill before the end of the year for the first time in decades, Politico ...
Read more

A change to cryptocurrency reporting rules in the infrastructure bill was blocked in the Senate Monday, leaving language for broad oversight of virtual currencies still in the legislation set to pass the Senate.
Read more

While the expectations may be high for New England Patriots rookie Mac Jones heading into the 2021 season, they will be even higher for the reigning NFL Offensive Rookie of the Year Justin Herbert.
Read more

Norwegian Air (NORR.OL) forecast its bookings will rise in the months ahead as European travel resumes with the lifting of COVID-19 curbs, but the budget carrier refrained from providing …
Read more

Attorneys for Andrew Brown’s family will continue to petition...

Following the family's viewing of body and dash camera footage of Andrew Brown Jr.'s death, attorneys for the family recommitted to pursuing the full release of all videos of the shooting.
Read more

GM and LG Chem announced Friday plans to build a second U.S. battery cell factory — a $2.3 billion facility in Spring Hill, Tennessee that will supply the automaker with the cells needed for the 30 electric vehicle models it plans to launch by mid decade. Con…
Read more

Life without parole sought for man charged with killing...

China accuses US of interfering in Hong Kong 100...

The Chinese Ministry of Foreign Affairs released a list on Friday of 100 times it says the U.S. has interfered with Hong Kong....
Read more

Australia sticks by plan to re-open border in mid-2022...

Australia is sticking to plans to start re-opening to the rest of the world only from the middle of next year, officials said on Sunday, resisting mounting pressure to end the closure of international borders.
Read more

Senate Dems call on Biden to push for COVID-19...

A group of nine Senate Democrats, including Elizabeth Warren (Mass.) Tammy Baldwin (Mich.) and Bernie Sanders (I-Vt.), is pressing the Biden administration to push for a waiver of international intellectual property...
Read more

The famous cartoon schemer has an ingenious plan to lure Bugs Bunny out of his hole—and it involves a giant magnet and an iron carrot.
Read more

Manchin comes face to face with his critics

China has detected its first case of the Omicron coronavirus variant on the mainland, posing a fresh challenge to the country's zero-Covid strategy in the lead-up to the Beijing Winter Olympics.
Read more

Correa has twice pointed at his wrist after big-time hits in the ALCS, which is tied after Houston beat Boston on Tuesday night.
Read more

Public transport workers will be at risk of infection if rules are dropped, the Unite union says.
Read more

Everton midfielder James Rodriguez travels to Qatar for talks with a club before a potential move to the Middle East.
Read more

A Colorado police officer assisted a 78-year-old woman with dementia earlier this month with walking for “quite a long time” after her worried husband told authorities she had wandered off.
Read more

After the Jan. 6 riot, police departments confront the...

The debate over police suicide comes as the U.S. is in the middle of national reckoning about policing, fueled by the killing of several innocent black men at the hands of police officers.
Read more

Police: Suspect may have a sex addiction

Behind the hottest housing markets

Some cities across the country are witnessing outsized demand from homebuyers, with competitive bidding and rising property prices. After a sharp drop-off in interest at the start of the pandemic, Americans returned their attention to home-buying with vigor. …
Read more

Chinese companies which hold the data of more than 1 million users must apply for cybersecurity approval when seeking overseas listings, according to the Cyberspace Administration of China.
Read more

Odd Lots Newsletter: Let’s Talk About the Risks to...

Welcome to the subscriber-only Odd Lots newsletter. Every week, Joe Weisenthal and Tracy Alloway bring you their thoughts on the most interesting developments in markets, finance and economics.
Read more

President Biden will travel to Kansas City on Wednesday to discuss his new bipartisan infrastructure package, the latest stop in the White House's campaign to promote his signature legislative accomplishment. ...
Read more

Canada to re-tighten border measures as it braces for...

'We've come this far, now is not the time to give up,' Canada's health minister said Friday.
Read more

AP PHOTOS: Virus left transgender Kashmiris ‘on our own’

Singing and dancing at weddings used to earn Khushi Mir enough income to take care of her family. Until the pandemic. Lockdowns to curb the coronavirus in Indian-controlled Kashmir canceled weddings and musical evenings. Bills for Mir's rented accommodation …
Read more

Gregory’s Girl: ‘The affection for it overwhelms me’

The teenage romantic comedy set in a Scottish new town has been an enduring success for 40 years.
Read more

Police in Fruitland, Idaho, said that while unidentified individuals captured in surveillance footage may help investigators piece together a timeline regarding the disappearance of 5-year-old Michael Joseph Vaughan. The unidentified people are not considered…
Read more

More than 30 reported killed, Save the Children staff...

At least 30 people, including women and children, were killed in the eastern Myanmar state of Kayah on Friday, according to the Karenni Human Rights Group, with two members of international humanitarian group Save the Children still missing.
Read more

The state’s independent rural drugstores are showing the power of small.
Read more

The holiday shopping season arrives earlier every year. In 2021, it’s not only a retailer’s strategy to get you to spend more money. Supply chain disruptions and chip shortages mean buying specific items will be more challenging and more expensive.
Read more

The dramatic rise in Covid-19 cases and hospitalizations due to the more transmissible Delta variant is significantly impacting all age groups, particularly Americans ages 11 or younger who are not yet eligible to receive vaccinations.
Read more

Questions about the First Son could detract from the president’s efforts to position himself as a global good-government crusader.
Read more

A ‘Bubble Barrier’ is trapping plastic waste before it...

What do old televisions, street signs, motorbike helmets, windsurf boards, and Christmas trees have in common? They were all caught floating down Amsterdam's Westerdok canal -- by a curtain of bubbles.
Read more

Woman Finds Outline of ‘Dead Body’ Under Carpet in...

"I wasn't bothered knowing someone died in my new house, but imagine my surprise when I ripped up the floor and found this."
Read more

Wisconsin falls 6-3 to Bemidji State in first round...

The Wisconsin Badgers men’s hockey team’s season ended abruptly Friday following a 6-3 loss to Bemidji State in the opening round of the 2021 NCAA Tournament.
Read more

The prospect that lockdown easing could be delayed and the latest on the Brexit row lead the front pages.
Read more

Presented by Facebook THE BUZZ GAVINS BIG GIVEAWAY: You get a car! And you get a car! No, Gavin Newsom didnt exactly reach the...
Read more

"Extreme Sisters" Brooke and Baylee reveal why they choose to sleep in the same bed at the ages of 24 and 22.
Read more

As climate fight shifts to oil, Biden faces a...

President Joe Biden’s bid to tackle climate change is running straight through the heart of the U.S. oil and gas industry
Read more

Sunday’s vote in Iraq clouded by a disillusioned electorate

The Walt Disney Co. turned a profit in its most recent quarter as reopened parks provided a revenue bounce
Read more

Prosecutors in New York are reportedly looking into cash bonuses given to Trump Organization employees as part of their probe into whether the company paid taxes on benefits given to some members of its staff....
Read more

The Supreme Court is returning to its iconic courtroom in October to hear in-person oral arguments for the first time since March 2020, when the COVID-19 pandemic forced the justices to conduct business over the phone. Oral arguments scheduled for the October…
Read more

U.S. health officials' decision to shorten the recommended COVID-19 isolation and quarantine period from 10 days to five is drawing criticism from some medical experts and could create confusion among many Americans
Read more

Fauci: Omicron likely dominant in US in ‘few weeks,’...

Anthony Fauci said Thursday that the omicron variant will likely be dominant in the U.S. in "a few weeks" and warned of the possibility of hospitals being overwhelmed this winter.
Read more

"48 Hours" Live to Tell: The lone survivor of a serial killer on a multi-state killing spree tells her story, in her words. Watch Saturday, Sept. 2 at 10 p.m. ET/PT on CBS.
Read more

President Kenyatta's plan to change the constitution is blocked after the court said it was illegal.
Read more

Belarus Olympic track sprinter Krystsina Tsimanouskaya has been granted Asylum in Poland after expressing fears of her own safety if she returned to her native country, ...
Read more

Google Says Staff Have No Right to Protest Its...

Google employees have no legal right to protest the company’s choice of clients, the internet giant told a judge weighing the U.S. government’s allegations that its firings of activists violated the National Labor Relations Act.
Read more

Afghanistan: Baby lost in Kabul evacuation is reunited with...

The infant was lost after being handed to an American soldier at Kabul airport in August.
Read more

Kate and William’s 10 years of marriage in pictures

The past decade has seen the duke and duchess travel the world, work with charities and raise a family.
Read more

Selena Ling on the Markets (Radio)

China's total arable land amounted to almost 1.28 million sq km (490,000 sq miles) by the end of 2019, down nearly 6% compared with a decade earlier, according to a once-in-a-decade survey of the country's land use published on Thursday.
Read more

The celebrated designer and businessman once said: "I have always dressed the same person, myself."
Read more

House slated to vote on Violence Against Women Act next week