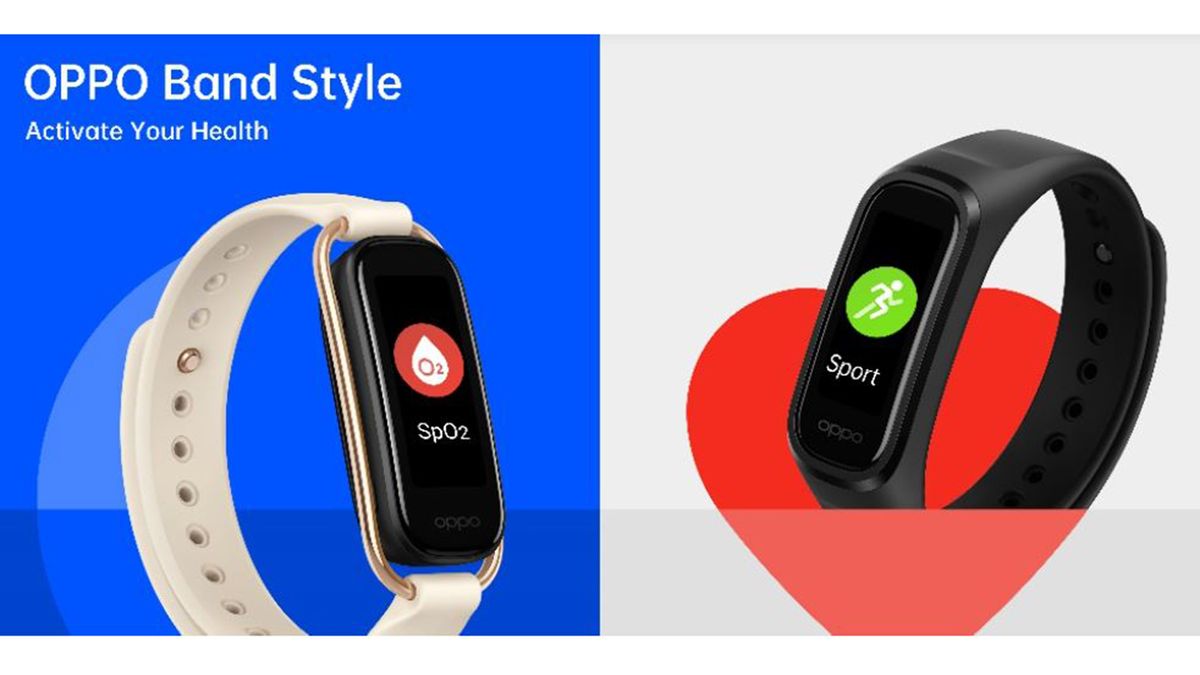 Oppo is all set to bring a new wearable to its catalogue. Called the Oppo Band Style, this new fitness band offers real-time heart rate and continuous SpO2 monitoring, breathing quality assessment even during sleep.

The all new Band Style offers 12 workout modes which work as an exercise log on your wrist. The Oppo Band Style is set to launch on March 8 alongside the OPPO F19 Pro series smartphones. The pricing of the Band Style is not revealed yet.

Besides sleep monitoring, the Oppo Band Style apparently makes working out easier and has 12 built-in workout modes, including running, walking, cycling, swimming, badminton, cricket, Yoga, etc. It covers most of the sports that are popular among young people. The Oppo Band Style’s recorded exercising data and progress can be checked by users in the HeyTap Health app.

The Oppo Band Style comes with a 2.794 cm (1.1-inch) full colour AMOLED display. And the images reveal that there will be two styles of the band, one that would have a metal ring around it and the other with the fiber of the band encasing it. Two colours are also expected, one in white and the other in black. Other features and the full specifications of the Oppo Band Style are set be unveiled at the launch on March 8. Cost of living rises at fastest pace for 30 years

Florida state Rep. Michele Rayner (D) is jumping into the race to succeed Rep. Charlie Crist (D-Fla.) in his St. Petersburg-based House seat.Rayner, who last year became the first openly LGBTQ woman of color to be elected to the Florida legislature...
Read more

Apple offering paid time off for employees to get...

Apple is offering paid time off for employees to get vaccinated for COVID-19, people with knowledge of the matter told ...
Read more

Watch highlights as West Ham put five goals past Reading to lift themselves off the bottom spot in the Women's Super League.
Read more

COVID-19 vaccination rarely resulted in adverse side effects in children ages 5-11, according to a study from the Centers for Disease Control and Prevention (CDC)In October, the Food and Drug Administration (FDA) g...
Read more

Tower Hamlets: How do you vaccinate a London borough?

Tiger Roll will return to the scene of his biggest wins on Thursday - but in a different race at Aintree as the Grand National meeting starts,.
Read more

China posted record a 4.36 trillion yuan trade surplus in 2021, according to Bloomberg calculations based on official data.
Read more

President Joe Biden’s pick to be ambassador to China drew sharp lines with Beijing over its “aggressive” actions in the Indo-Pacific but said “American strength” gives the U.S. key advantages in the relationship between the world’s two largest economies.
Read more

The Vatican took the rare step of voicing a public objection that a proposed law to criminalize homophobia in Italy would threaten "freedom of thought."
Read more

Moto Edge X is confirmed – could it be...

The Moto Edge X has been confirmed in a mysterious tease, but that's all we know about the device right now.
Read more

Britain’s foreign minister has expressed optimism that there is a “deal to be done” to resolve a Northern Ireland trade dispute that has soured the U.K.’s relations with the European Union
Read more

British house prices might only inch up in 2022 after the rapid upturn seen this year, mortgage lender Halifax said on Friday.
Read more

Sofia Coppola on telling “The Beguiled” from a female...

Director and writer Sofia Coppola received critical acclaim in 1999 for her debut movie "The Virgin Suicides" and won an Academy Award for her second movie, "Lost in Translation." Her new thriller, "The Beguiled," follows a group of women at an all-girls boar…
Read more

One of Facebook's top executives, Antigone Davis, is testifying before the Senate subcommittee on Consumer Protection, Product Safety, and Data Security on issues including Instagram's impact on the mental health of teenage users. Clinical psychologist Ramani…
Read more

And the band member played on

Reading teacher Dawn West, 52, says the very happiest days of her life were the ones spent as a member of the West Virginia University marching band. What's amazing is, she never left, attending classes just to remain a member of the band. Steve Hartman meets…
Read more

Moderna Inc. said that a new analysis of the late-stage clinical trial of its Covid-19 vaccine found a higher rate of breakthrough cases in people who got shots early in the study.
Read more

WhatsApp’s woes in India continues – Its case is...

The Delhi High Court has refused to set aside the Indian fair trade regulator, the Competition Commission of India (CCI), order calling for an investigation into allegations of abuse of dominance levelled against the Facebook-owned WhatsApp in relation to its…
Read more

From "red films" and rap to a lavish gala, the country has seen a ramped-up propaganda drive.
Read more

A display that aspires to stand out of the crowd thanks to some clever features.
Read more

U.S. troops have vacated the Bagram Airfield in Afghanistan after nearly 20 years as a full withdrawal from the nation nears completion, according to multiple reports. ...
Read more

Hospitals across the U.S. turning to foreign nurses as...

Maxwell has been jailed since her arrest in July 2020, and was charged with six counts for acts committed in the 1990s and then allegedly lying to investigators in 2016.
Read more

What moving abroad taught me about being American

Growing up in the United States, CNN Travel's Lilit Marcus never really thought about what it meant to be American. Then, in 2019, she moved to Hong Kong
Read more

Congressional Black Caucus Chair Joyce Beatty (D-Ohio) led a group of pro-voting rights protesters into the Hart Senate Building Thursday afternoon, resulting in her being taken into custody."We will not be turned...
Read more

The weekend oil leak along the Southern California coast happened not far from the site of the catastrophe more than a generation ago that helped give rise to the modern environmental movement itself: the 1969 Santa Barbara oil spill
Read more

Belarus Olympian Timanovskaya says grandmother warned her not to...

Krystina Timanovskaya says she fled after being warned it was not safe to fly home from the Olympics.
Read more

Personal Finance: When Should I Retire If My Spouse...

The decision to retire when a spouse does is getting more complicated as couples face inflation headwinds and differing views on spending.
Read more

Some hospitals are finally free of Covid patients

Seeing fewer Covid-19 patients has been a weight off the shoulders of health care workers, who credit the success of vaccines.
Read more

Evergrande 75% Haircut Is Now a Base Case for...

China Evergrande Group may undergo one of the country’s biggest-ever debt restructurings, if the developer’s distressed-level bond prices are any indication.
Read more

Diana interview: BBC will get chance to make changes...

The government wants to see changes following the inquiry into the BBC's 1995 Diana interview.
Read more

House to vote on January 6 commission amid growing...

The House will vote on legislation to create a bipartisan commission to investigate the attack on January 6.
Read more

The Oregon Holocaust Memorial in Portland was vandalized over the weekend with Nazi swastikas and other anti-Semitic messages....
Read more

The Vandenberg Space Force Base, from where the rocket launched, warned there may be "unsafe" rocket debris in the area and said residents should stay away from it.
Read more

These Indian expats wanted inspirational Hindu-themed toys for their kids... so they started a company and began making them. Read more via Businessweek: https://bloom.bg/3nik8zd
Read more

The scene in "Gentlemen Prefer Blondes" has been widely imitated in the decades since, from Madonna's "Material Girl" video to Margot Robbie in "Birds of Prey."
Read more

Seven years after then Justice Secretary Chris Grayling's changes, the system is reverting back.
Read more

Welcome to Tuesday's Overnight Energy & Environment, your source for the latest news focused on energy, the environment and beyond. Subscribe here: ...
Read more

Cashless forms of payments are making inroads even in the country famous for its 1,000-franc ($1,087) banknote.
Read more

US troops arrive to help with evacuation efforts as militants seize a city an hour's drive from Kabul.
Read more

The U.S. Treasury sanctioned the Eritrean army’s chief of staff for his involvement in the conflict in neighboring Ethiopia.
Read more

The fire, which has affected Oban to Glasgow trains, broke out close to a site storing gas cylinders.
Read more

Inside the Waldorf Astoria’s $1 billion makeover

The luxury hotel in Manhattan is 90 years old this month, and it is currently undergoing a years-long renovation that will include opulent private residences.
Read more

Report: Americans are seeing the worst inflation in nearly...

A new Labor Department report shows that inflation rose by almost 7% in the last year -- the highest one-year increase in 39 years. President Biden said the increase has peaked and that prices should begin to fall sooner than expected. But he also acknowledge…
Read more

The partisan divide in vaccinations is starker than you...

The effort to reach the unvaccinated has become the latest political fault line in the Covid response.
Read more

FEMA administrator on Hurricane Ida: “The threat has not...

Deanne Criswell, the Federal Emergency Management Agency administrator, joins CBSN's Lana Zak to discuss how the U.S. government is responding to Hurricane Ida. She said that resources might be needed to facilitate evacuations and step in to help communities …
Read more

Australia is considering listing koalas on the country's east coast as endangered, Minister for the Environment Sussan Ley said on Friday in an emailed statement.
Read more

Top US diplomat calls for ‘sustained and substantive dialogue’...

The United State's representative to the United Nations called on Wednesday for "sustained and substantive dialogue" with North Korea over the country's denuclearization."Our position remains cle...
Read more

In a massive Cabinet revamp, Indian Prime Minister Narendra Modi has dropped 12 senior ministers and inducted a younger team aimed at refurbishing his government’s image after widespread criticism of its handling of the COVID-19 pandemic
Read more

"Sunday Morning" takes a look at some notable events of the week ahead. Charles Osgood reports.
Read more

George Clooney Brands Donald Trump a ‘Knucklehead’ Who Was...

George Clooney shared his cutting take on the former president as he discussed the challenges the Biden administration has faced.
Read more

I never knew about this Xbox feature after all these years