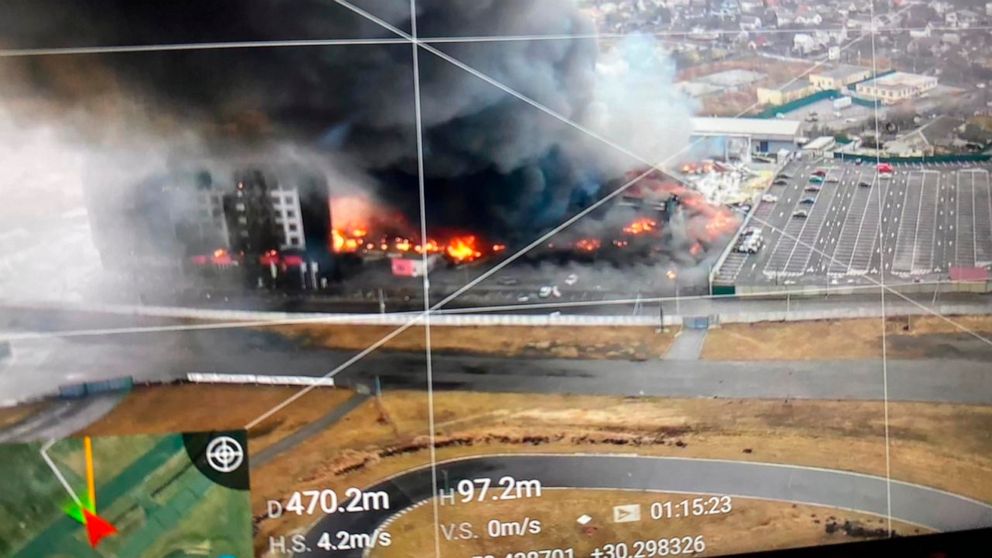 In better times, Ukrainian drone enthusiasts flew their gadgets into the sky to photograph weddings, fertilize soybean fields or race other drones for fun. Now some are risking their lives by forming a volunteer drone force to help their country repel the Russian invasion.

Kyiv needs you and your drone at this moment of fury! read a Facebook post late last week from the Ukrainian military, calling for citizens to donate hobby drones and to volunteer as experienced pilots to operate them.

One entrepreneur who runs a retail store selling consumer drones in the capital said its entire stock of some 300 drones made by Chinese company DJI has been dispersed for the cause. Others are working to get more drones across the border from friends and colleagues in Poland and elsewhere in Europe.

Why are we doing this? We have no other choice. This is our land, our home, said Denys Sushko, head of operations at Kyiv-based industrial drone technology company DroneUA, which before the war was helping to provide drone services to farmers and energy companies.

Sushko fled his home late last week after his family had to take cover from a nearby explosion. He spoke to The Associated Press by phone and text message Friday after climbing up a tree for better reception.

We try to use absolutely everything that can help protect our country and drones are a great tool for getting real-time data,” said Sushko, who doesn’t have a drone with him but is providing expertise. Now in Ukraine no one remains indifferent. Everyone does what they can.

Unlike the much larger Turkish-built combat drones that Ukraine has in its arsenal, off-the-shelf consumer drones arent much use as weapons but they can be powerful reconnaissance tools. Civilians have been using the aerial cameras to track Russian convoys and then relay the images and GPS coordinates to Ukrainian troops. Some of the machines have night vision and heat sensors.

But there’s a downside: DJI, the leading provider of consumer drones in Ukraine and around the world, can easily pinpoint the location of an inexperienced drone operator, and no one really knows what the Chinese firm might do with that data. That makes some volunteers uneasy. DJI declined to discuss specifics about how it has responded to the war.

DJI makes its products entirely for civilian use, and we deplore any use of our products to cause harm,” company spokesperson Adam Lisberg said by email. However, just like the manufacturers of pickup trucks or mobile phones, we are unable to control how they are ultimately used.

Taras Troiak, a dealer of DJI drones who started the Kyiv retail store, said DJI has been sending mixed signals about whether it’s providing preferential access to or disabling its drone detection platform AeroScope, which both sides of the conflict can potentially use to monitor the other’s flight paths and the communication links between a drone and the device that’s controlling it. In the meantime, Ukrainian drone experts said they’ve been doing whatever they can to teach operators how to protect their whereabouts.

“There are a number of tricks that allow you to increase the level of security when using them, Sushko said.

Sushko said many in the industry are now trying to get more small drones including DJI alternatives transported into Ukraine from neighboring European countries. They can also be used to assist search-and-rescue operations.

Ukraine has a thriving community of drone experts, some of whom were educated at the National Aviation University or the nearby Kyiv Polytechnic University and went on to found local drone and robotics startups.

Theyve got this homebuilt industry and all these smart people who build drones, said Faine Greenwood, a U.S.-based consultant on drones for civic uses such as disaster response.

Troiak’s DJI-branded store in Kyiv, which is now shuttered as city residents take shelter, was a hub for that community because it runs a maintenance center and hosts training sessions and a hobby club. Even the countrys president, Volodymyr Zelenskyy, once paid a visit to the store to buy a drone for one of his children, Troiak said.

A public drone-focused Facebook group administered by Troiak counts more than 15,000 members who have been trading tips about how to assist Ukrainian troops. One drone photographer who belongs to the Ukrainian Association of Drone Racing team told The Associated Press he decided to donate his DJI Mavic drone to the military rather than try to fly it himself. He and others asked not to be named out of fear for their safety.

The risk to civilian drone operators inside Ukraine is still great,” said Australian drone security expert Mike Monnik. Locating the operator’s location could result in directed missile fire, given what weve seen in the fighting so far. Its no longer rules of engagement as we have had in previous conflicts.”

Some in Ukraine’s drone community already have experience deploying their expertise in conflict zones because of the country’s long-running conflict with Russian-backed separatists in eastern Ukraine. Monnik’s firm, DroneSec, has tracked multiple instances just in the past year of both sides of that conflict arming small drones with explosives. One thing that Ukrainians said they’ve learned is that small quadcopter drones, such as those sold at stores, are rarely effective at hitting a target with explosive payloads.

It would seem somewhat short-sighted to waste one, said Greenwood, the consultant based in Cambridge, Massachusetts. I assume the chief goal would be recon. But if things are getting desperate, who knows.

DJI also has experience in responding to warfighters trying to weaponize its drones and used so-called geofencing technology to block drone movements during conflicts in Syria and Iraq. It’s not clear yet if it will do the same in Ukraine; even if it does, there are ways to work around it. But its rival U.S.-based drone company Skydio, without mentioning DJI by name, warned this week that “Russia and its allies — including China could force technology companies subject to their laws to suspend operation or to provide intelligence on Ukrainian forces.

The California company said it has not previously sold products in Ukraine but is now looking at getting some in the hands of Ukraines defense forces.

Small civilian drones are no match against Russian combat power but will likely become increasingly important in a protracted war, leaving drone-makers no option to be completely neutral. Any action they take or avoid is indirectly taking a side,” said PW Singer, a New America fellow who wrote a book about war robots.

We will see ad-hoc arming of these small civilian drones much the way weve seen that done in conflicts around the world from Syria to Iraq and Yemen and Afghanistan,” Singer said. Just like an IED or a Molotov cocktail, they wont change the tide of battle but they will definitely make it difficult for Russian soldiers.”

Republicans lash out at Justice Department after FBI searches...

Bitcoin ‘rarely’ used for legal transactions, on ‘road to...

RingCentral reckons it has cracked the whole webinar goldmine

Ozzy Osbourne Says He Is Returning to the UK...

How the Troy Hill trade to the Rams transpired...

Kari Lake defeat: Did democracy win in US midterms?

Nothing will reveal its first phone on July 12th

Why mental health matters for athletes — even as...

Senate deal should make it easier to buy electric...

Sarah Everard one year on: The people trying to...

Carli Lloyd DOES NOT believe USWNT will win the...

Microsoft is still trying desperately to get you to...

Email will be with us until the universe dies,...

MLB odds: Lines on Trea Turner’s next team, from...

Sony’s LinkBuds S are cheaper than ever ahead of...

Johnson Is Taking Tories to Heavy Loss in Special...

Driver dies in single-vehicle crash on A72 near Peebles

In pictures: Protests across the world show support for...

Boris Johnson says he will do more to help...