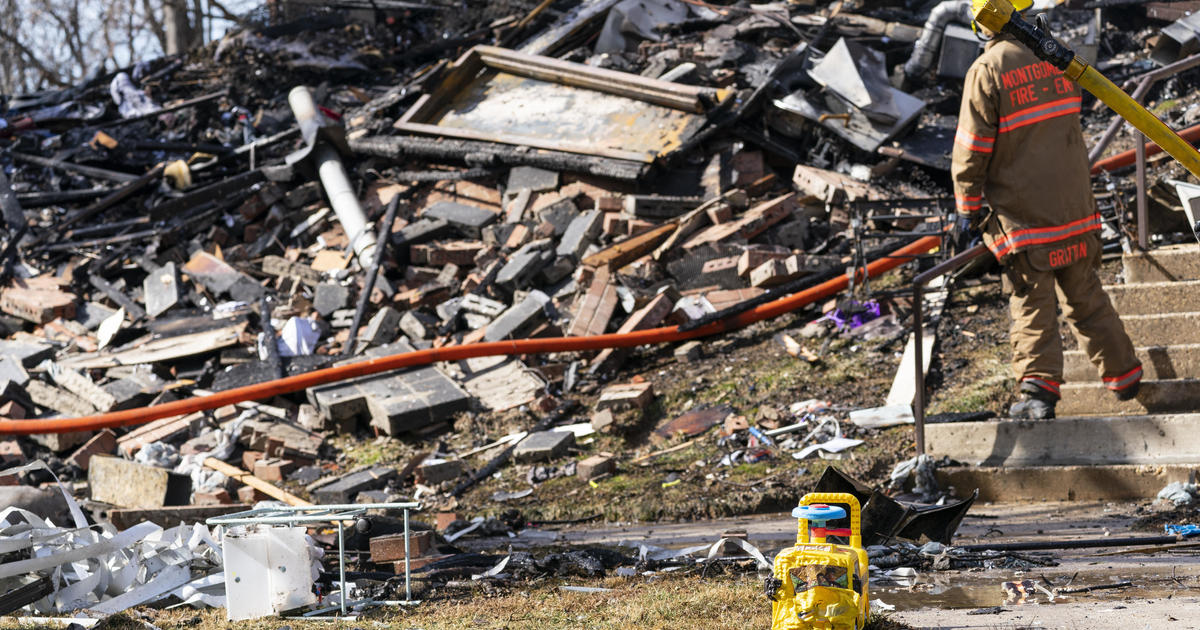 Ten people have been transported to the hospital and several others are unaccounted for after a fire and explosion at a Maryland apartment building Thursday morning, officials said. Three victims are being treated for serious injuries while seven others are in conditions ranging from mild to moderate, according to Montgomery County Fire Chief Scott Goldstein.

Around 10:30 a.m., a fire was reported at the Friendly Garden Apartments in Silver Spring, officials said. Upon arriving at the scene, firefighters were able to pull several people from inside the building before it “became completely consumed by fire” and collapsed, Goldstein said Thursday, according to CBS Baltimore.

An unspecified number of people are unaccounted for, Goldstein said. The blast also displaced about 100 people.

A partially melted child’s toy is seen as firefighters work the scene after an explosion and fire caused an apartment building to collapse in Silver Spring, Md., Thursday, March, 3, 2022.

Three of the complex’s six buildings have been declared “unsafe to reoccupy” by fire engineers, Goldstein said. Residents will be allowed to return to collect their belongings once it is deemed safe to do so.

Charred rubble is seen after an apartment building collapsed after an explosion this morning in Silver Spring, Md., Thursday, March, 3, 2022.

An investigation into the cause is underway, and fire officials said they will provide updates as they become available, according to Montgomery County Executive Marc Elrich. He said the county has offered mental health support as well as temporary housing to displaced residents.

“Our thoughts are with all those who have been impacted by this horrible and tragic event,” Elrich said.

The Montgomery County Council also extended condolences to those affected by the incident.

“Councilmembers are keeping the residents of the Friendly Garden Apartments and the neighboring community members in our thoughts and prayers after today’s horrific explosion, fire and building collapse,” the council said in a joint statement Thursday. “The Council also stands ready to assist survivors, family members and neighbors by doing everything in our power to provide support during the recovery and rebuilding process.” Palihapitiya SPAC Is Said to Be in Talks With...

Free school lunches for all are ending. But House...

Apple Mac Mini M1 gets a huge discount at...

Queen, George Ezra and Craig David get ready for...

Navy ship sidelined by COVID-19 returns to sea with...

One dead, four hospitalized after shooting at DC hotel

Emma Raducanu: Britain’s US Open champion pulls out of...

Antrim Area Hospital had no free beds when incident...

Apple TV is about to get much worse for...

Kennedy Center lights up in blue and yellow to show support for...

NBC reporter insists Biden canceling Keystone Pipeline made no difference on US...