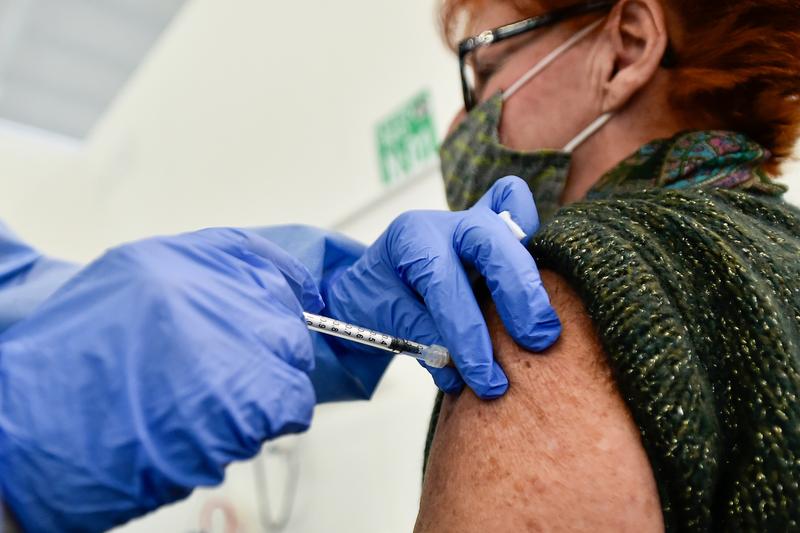 MILAN (Reuters) – Italy will administer just a single vaccine dose to those infected with COVID-19 between three and six months beforehand, the health ministry said, a move apparently aimed at saving shots amid a stuttering EU inoculation rollout.

The recommendation applies to both people who have fallen ill and those who were diagnosed but had no symptoms.

Italy is the third European Union country after France and Spain to follow this path at a time when EU nations are struggling to boost their vaccination campaigns due to supply cuts imposed by drugmakers.[nL1N2KI0XA]

Italy, which has a population of around 60 million, had administered 4.76 million doses of vaccines as of early Thursday, with some 1.5 million people receiving the recommended two shots.

In all, it has received 6.3 million doses from manufacturers, but repeated supply delays have hampered inoculation efforts.

Prime Minister Mario Draghi has shaken up Italys management of the pandemic since taking office last month, replacing both the special COVID commissioner and the head of the civil protection agency with an eye to speeding up vaccinations.

Draghi also suggested at a meeting of EU leaders last week that first shots should be given priority. At present many EU countries, including Italy, are following drugmaker recommendations to give people two separate vaccinations and are holding back doses as a result.

Britain, which has left the European Union, has managed to vaccinate millions more of its citizens than any EU state, in part because it is using most of the doses at its disposal for initial shots.

The EU drug regulator EMA said on Wednesday it had not yet seen enough evidence to recommend changes to the dosage regime for COVID-19 vaccines.

On Tuesday night, German leaders urged doctors to use the full length of the approved interval between first and second vaccinations and to minimise stockpiling of booster shots to get more people started on the two-shot course. At a West Bank outpost, Israeli settlers flaunt their power

Covid: University students could be told jabs are required...

There will be "advance warning" if vaccines become compulsory for halls, the foreign secretary says.
Read more

The FBI's Washington Field Office confirmed that it "does not have any information indicating specific or credible threats."
Read more

A man is arrested on suspicion of murder after the stabbing at a property on Beatrice Road.
Read more

West Ham captain Mark Noble announces that next season will be his last at the club after signing a one-year deal.
Read more

Opinion | The Roberts Court is Dying. Here’s What...

With the Supreme Court chief justice increasingly sidelined, the new majority has an aggressive strategy to cement a conservative governing agenda.
Read more

It's a significant step in the case.
Read more

America’s summer is ‘full of possibility,’ but is Biden’s...

It's not an exaggeration to say that if you had to be anywhere in the world right now, you might choose the United States, given the high availability of vaccines and an economy on the rebound.
Read more

Android 12 could add a recycle bin and automatic...

Two very useful features could be on their way to Android 12 based on early, unreleased code.
Read more

The ruling cleared the way for sentencing to proceed.
Read more

Children of the 90s study: ‘I feel privileged to...

Burnley game with Leicester game postponed because of Covid-19...

Burnley's game at home against Leicester City on Saturday is postponed because of Covid-19 cases and injuries within the Turf Moor side's camp.
Read more

Moment when European Commission President left without seat during...

After European Council President Charles Michel left his colleague, European Commission President Ursula von der Leyen, without a seat during a meeting, a group of women leaders have urged him to resign. The group said the chair snub was a "trap" set by Turki…
Read more

Kid Galahad suffers a devastating defeat in his maiden defence of the IBF world featherweight title, knocked out in the sixth round by Spaniard Kiko Martinez.
Read more

Team GB's Katarina Johnson-Thompson takes victory in the first event of the women's heptathlon, the 100m hurdles, at the Olympic Stadium in Tokyo.
Read more

Pay the equivalent of just $1.13 for your next five years of VPN - this astonishing VPN deal from PureVPN is going to be hard to refuse.
Read more

What the U.S. Can Learn From Germany’s Nuclear Power...

While Germany is preparing to shut down the last of its nuclear power plants, the U.K., the Netherlands and Poland are aiming to build more.
Read more

How decentralized models are reimagining the cloud

No. 2 US diplomat Sherman to visit China as...

Brighton come from two goals down to beat 10-man...

America’s longest war is ending. A nation is left...

America's "forever war" in Afghanistan outlasted the first three commanders in chief of this century. But this week, Joe Biden is set to become the President who imposes closure on the US' role in the bloody, intractable conflict.
Read more

The US actress names her new dog after the Australian minister who said her dogs should go home in 2015.
Read more

NASA has picked 10 new astronauts, half of them military pilots, as it looks ahead to the moon and Mars
Read more

Canada Threatens to Retaliate Against U.S. Over EV Tax...

Durbin calls for investigation into Chicago shelter for Afghan...

Hollywood star Jada Pinkett Smith has posted a never-before-seen poem written for her by deceased rapper Tupac Shakur, who would have turned 50 on Wednesday.
Read more

Gottlieb says Omicron appears to be a “milder strain”...

Gottlieb also noted that places that have been hard hit early by Omicron are as soon as "two weeks away from peaking, but the rest of the country probably faces a hard month ahead of us."
Read more

Beaten Wilder has no plans to retire, says trainer

Deontay Wilder has no plans to retire, the American boxer's trainer Malik Scott said, after he was knocked out by Briton Tyson Fury in their WBC heavyweight world championship fight on Saturday.
Read more

‘The Abolition of Man’ and the Fourth of July

Michael Ward’s guide to C.S. Lewis’s modern classic reminds us that a good life is lived towards a good death.  The post ‘The Abolition of Man’ and the Fourth of July appeared first on The American Conservative.
Read more

The first cargo ship has successfully passed through the entirety of the Suez Canal since the waterway reopened after a nearly-weeklong shutdown due to the grounding of the massive cargo vessel "Ever Given."...
Read more

Heather Watson is unable to clinch victory for Great Britain at the first time of asking in their Billie Jean King Cup play-off tie against Mexico.
Read more

A report detailing the findings of an impeachment investigation into former New York Gov. Andrew Cuomo is expected to be released to the public in the coming days, according to two members of the New York State Assembly Judiciary Committee.
Read more

The health secretary refused to rule out further restrictions for England, as Omicron continues to spread.
Read more

Woman suffers significant burns while trying to save her...

A woman suffered significant thermal burns from her shoulders to her feet while trying to save her dog who jumped into a hot spring at Yellowstone National Park, officials said Tuesday.
Read more

The Royal Dutch Shell oil and gas company will buy a renewable energy company as part of its goal of achieving net-zero emissions by 2050.The oil company's Shell New Energies U.S. LLC unit is set to purchase Inspir...
Read more

The type of gun used in most US homicides...

Handguns are responsible for nearly two-thirds of the nation’s gun murders.
Read more

California could wind up rerouting cash directly back to taxpayers.
Read more

The FBI warned Rudy Giuliani and Sen. Ron Johnson (R-Wisc.) that they were targets of a Russian attempt to meddle in November’s election, The Washington Post reported.
Read more

A letter from the famous physicist Albert Einstein that includes one of few known examples of his equation, E = mc2,  sold for more than $1.2 million at an auction this week. The auction began on...
Read more

My Morning Jacket was formed by a group of childhood friends from Louisville, Kentucky. They’ve been making music together for decades – and nearly called it quits. But then they produced a new self-titled album and reclaimed what Rolling Stone calls "their m…
Read more

At least 50 in Norway infected with omicron variant...

Norwegian officials said at least 50 people have been infected with the new omicron variant of the coronavirus, ...
Read more

How Meghan should, and shouldn’t, influence princess play

Princessdom is a perennial fantasy, even for daughters of the most avowed anti-princess feminists. To fight it is so hard. Meghan, the Duchess of Sussex, and her eye-opening story is a reminder for parents to be thoughtful about how their children perceive pr…
Read more

The movies that mattered in 2021, while streaming soared...

'Spider-Man: No Way Home,' 'Westside Story,' 'Shang-Chi,' 'Summer of Soul' and other top movies of the year.
Read more

Thai customs officials say they have made their biggest seizure of heroin this year, about 315 kilograms (700 pounds) worth up to $29 million
Read more

The dramatic rise in Covid-19 cases and hospitalizations due to the more transmissible Delta variant is significantly impacting all age groups, particularly Americans ages 11 or younger who are not yet eligible to receive vaccinations.
Read more

The "internationally significant" discovery was made by builders working on a home extension.
Read more

The source of the sheen was not immediately determined.
Read more

SPOOKED BY INFRASTRUCTURE As if Halloween wasnt scary enough, top Democratic leaders on Capitol Hill are saying that Oct. 31 is their new...
Read more

England's Ollie Robinson hits high but is comfortably caught by Kyle Jamieson at fine leg as New Zealand keep up the pressure on day four of the first Test at Lord's.
Read more

John Kennedy delivers speech at the 1956 DNC to withdraw his name from the VP nomination after losing to Estes Kefauver in the free vote.
Read more

Police investigating the death in West Drayton are appealing for witnesses and dashcam footage.
Read more

Tesla (TSLA.O) is discovering that even new carmakers can suffer old problems. The electric-car maker’s China orders nearly halved in May from a month earlier, The Information reported on Thursday, after jitters over its quality controls in the country. This …
Read more

Decades after a young Colorado girl goes missing, a...

Steve Pankey, who twice ran for governor of Idaho, was charged with the death of 12-year-old Jonelle Matthews, nearly 36 years after she disappeared. "48 Hours" correspondent Richard Schlesinger joins "CBS Mornings" with the surprising details of his trial.
Read more

Rudy Giuliani has claimed privilege on just three of the more than 2,000 files seized by the FBI as part of a probe into his lobbying activities.
Read more

A Novartis AG drug that delivers a targeted blast of radiation directly to prostate cancer cells boosted survival by four months in a late-stage study in patients failed by other treatments.
Read more

"Nassib’s announcement is going to make him a better player, by freeing up his mind," former quarterback Warren Moon says.
Read more

The Navy says the USS Connecticut "struck an object" while submerged.
Read more