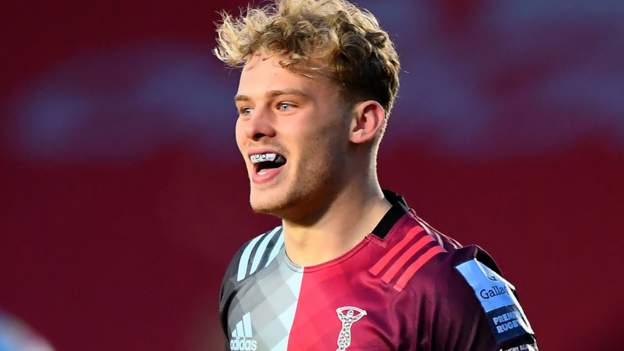 Louis Lynagh has made nine appearances for Harlequins

The 20-year-old is the son of former Australia captain Michael Lynagh and has scored two tries in five starts this season for Quins having made his debut in the final game of last season.

The club has not disclosed the length of the England youth international’s new “long-term” deal at the Stoop.

“He has worked hard in training the last few seasons and has taken his chances with both hands this season.” At least six people died when a towering slab of rock broke from a cliff and toppled onto boaters drifting near a waterfall on a Brazilian lake Saturday, officials said.
Read more

More than a hundred countries agree to cut methane

It is the third day of the international climate change summit, COP26. Today, it was announced that more than a hundred countries have signed up to an agreement to cut methane emissions by 30% by 2030. In September the United States of America and the Euro…
Read more

In the end, Republican leaders' inability to criticize an expansion of the welfare state through tax credits meant that Republican voters were left to judge the bill on its merits - and they liked what they saw.
Read more

Senators to grill Instagram chief over platform’s effect on...

Lawmakers on the Senate Commerce's subcommittee on consumer protection are set to grill Instagram chief Adam Mosseri Wednesday in a hearing focused on the impacts of social media use on teenagers and children....
Read more

Arizona Gov. Doug Ducey (R) Tuesday signed into law sprawling anti-abortion legislation that bans for the procedure if a mother is seeking to terminate a pregnancy due to a genetic abnormality in a fetus.The law al...
Read more

Miranda talks about Bruno, and the ‘Encanto’ phenomenon

COVID shots may be linked to rare heart problems...

The FDA is adding a warning to Moderna and Pfizer’s COVID-19 vaccines after a CDC advisory panel said data suggests a "likely association" between the vaccines and rare cases of heart inflammation in teens and young adults. Omar Villafranca reports.
Read more

The 2021 Patriot Awards are billed as a celebration of "American patriotism" and "everyday heroes across the country who have shown dedication to our nation and the values we hold dear."
Read more

Sam Fender admits to being ‘really hungover’ in BBC...

The musician and die-hard Newcastle fan travelled up to St James' Park to celebrate the club's takeover.
Read more

Inside one woman’s effort to normalize marijuana in homes...

“It’s about making sure that there’s actually a pathway for people who have been on the illicit market to actually get to be part of the real market," Shanel Lindsay said.
Read more

Liz Shuler will serve as the nation’s top union official until summer 2022, when the AFL-CIO’s 50-plus affiliates can gather for their annual convention to vote on a permanent successor.
Read more

Justin Rowlatt looks at the bonanza provided by coal, oil and gas in just the last two centuries. Our modern comfortable way of life is only made possible by burning through a finite stock of fossilised chemical energy. Today we are a fossil fuel society, acc…
Read more

Downing Street does not deny reports that two events took place on the eve of the Duke of Edinburgh's funeral.
Read more

A charter flight for White House press corps, who will follow President Biden on his first overseas trip to the United Kingdom, has been delayed by cicadas, Fox News has confirmed.
Read more

The European Union’s executive arm is likely to withhold approval of Hungary’s economic stimulus plan past a July 12 deadline due to concerns that the proposal doesn’t go far enough in preventing corruption, according to people familiar with the issue.
Read more

JPMorgan Chase & Co Chief Executive Officer Jamie Dimon said in a television interview on Tuesday that it could take six to nine months for consumer loan growth to return to normal.
Read more

A Crucial Winter Lies Before Us

Secretary of State Antony Blinken announced on Friday that he would be convening a virtual meeting with foreign ministers on the COVID-19...
Read more

Duke’s Krzyzewski eager for a final run with the...

Duke's Mike Krzyzewski feels the time is right to step away from a Hall of Fame coaching career. He's also eager to get back on the court for a final run after a bumpy year.
Read more

Sign up to our Next Africa newsletter and follow Bloomberg Africa on Twitter Zambia suffered a nationwide power blackout on Saturday, leaving a large...
Read more

The Hill gets slammed for labeling the Hyde Amendment...

The political news outlet The Hill was slammed by critics on Thursday for labeling the decades old Hyde Amendment as “controversial.”
Read more

Leaked case renders show familiar designs for the Samsung Galaxy S22 and S22 Plus, but a very different one for the Ultra.
Read more

IRS, stuck in the middle

Thank the Saints, Shadow and Bone season 2 has...

"It'd be very difficult for him to maintain ‘I can't speak about events to you, but I can speak about them in my book,’” said Rep. Adam Schiff.
Read more

Find vaccination centres near you via WhatsApp: Here’s how

New York Times: Tucker Carlson a source for many...

Fox Host Tucker Carlson served as a key source for many top political journalists in Washington, D.C. during former President Trump's time in the White House, according to a new report.Carlson's relationship with s...
Read more

Two vaccines made by China’s Sinopharm appear to be safe and effective against COVID-19, according to a study published in a medical journal
Read more

‘I want Afghan women to be free to wear...

Fashion icon Halima Aden and Afghan tutor Aliya Kazimy write to each other about the importance of choice.
Read more

Before the Omicron variant of coronavirus burst onto the scene in November, retired Australian Glenn Turnley was looking forward to a three-week trip to Japan, Britain and France in March - his first overseas jaunt since the pandemic began.
Read more

Paul keeps up complaints over handling of COVID-19 pandemic

Republican U.S. Sen. Rand Paul is keeping up his complaints about the government's handling of the COVID-19 pandemic
Read more

Queen Elizabeth was ‘very well’ when I saw her...

British Prime Minister Boris Johnson said Queen Elizabeth was "very well" when he had an audience with her last week, after the 95-year-old monarch missed a remembrance event on Sunday due to a back sprain. Read more

Washington girl’s lemonade stand shut down by city while...

Residents in Everett, Washington, have reportedly raised concerns about a nearby homeless encampment that some say received little attention from the city, while the city was quick to shut down a lemonade stand operated by a 7-year-old girl.
Read more

House Speaker Nancy Pelosi (D-Calif.) in a Monday statement thanking the National Guard for protecting the Capitol called on the Senate to take action on the Jan.6 commission, citing there's "no time to waste." ...
Read more

UBS Group AG will pay a $40,000 one-time bonus to its global banking analysts when they are promoted, doubling what some competitors are offering, as lenders seek to reward and retain younger employees weighed down by a surge in business and a prolonged work-…
Read more

Tiny harvest mice are being exported from East Kilbride to Ealing to help with a rewilding project.
Read more

California economic projections predict high growth but many are...

The U.S job report comes out Friday morning as California is expected to have high economic growth post-pandemic. The recovery leaves many unemployed people hopeful for an uptick even if they haven't received the call into work yet.
Read more

Lions’ Jeff Okudah hears it from coach amid team’s...

Detroit Lions cornerback Jeff Okudah was getting screamed at by one of his coaches on the sideline as the team was trailing the San Francisco 49ers early in the game.
Read more

What To Watch This Week in California: CA budget...

Days after she was fired under pressure from Republican legislators, Tennessee's former vaccinations director has issued a point-by-point rebuttal to a letter that recommended her removal
Read more

How to road trip with kids, from parents who...

Will and Kristin Watson have been living in a renovated bus since April 2019 with their almost-3-year-old daughter Roam and their pitbull Rush.
Read more

Prime Minister Abiy Ahmed is facing his first major electoral test. But what has he achieved?
Read more

From watching London 2012 from her hospital bed to swimming for ParalympicsGB at Tokyo 2020 - Suzanna Hext's Paralympic journey.
Read more

General Electric Co (GE.N) said on Thursday it would freeze pension benefits for about 2,700 employees in the United Kingdom from January and take a related charge.
Read more

Trump to meet with NATO leaders in Brussels

President Trump will meet with NATO leaders in Brussels on Thursday. CBS News chief White House correspondent Major Garrett gave a preview of what to expect from the upcoming meetings on CBSN.
Read more

Something very important for 2024 happened in Pennsylvania today

Unless you follow politics, or Pennsylvania, or Pennsylvania politics pretty closely, you likely skipped over Wednesday's announcement by state Attorney General Josh Shapiro that he is running for governor in 2022.
Read more

More than 60 people were contacted by fraudsters posing as officers, a force says.
Read more

Switzerland could become the first European country to ban artificial pesticides in a June 13 referendum which backers of the initiative hope will trigger similar prohibitions elsewhere.
Read more

Sen. Rob Portman (R-Ohio) on Tuesday announced that he tested positive for COVID-19 on Monday, but is asymptomatic.Portman said he took an at-home COVID-19 test in preparation for returning to Wa...
Read more

This week, Dana is joined by Fashion Designer, Entrepreneur and Author Rebecca Minkoff to discuss how she creates balance in her life.
Read more

Expert at Rittenhouse trial zeroes in on just a...

The defense has suggested to the jury that the relevant timeframe for determining whether Rittenhouse’s use of force was reasonable consists of just a few minutes around the shootings.
Read more

Slovenia's Primoz Roglic wraps up a third straight Vuelta a Espana title after riding to victory in the final stage of the race.
Read more

Turkey’s interior ministry has lifted a full lockdown that had ordered people to stay home to fight COVID-19 infections, shifting to a less-restrictive program that still involved curfews on weeknights and weekends
Read more

Lord Ahmed of Rotherham is also convicted of a serious sexual assault on a young boy in the 1970s.
Read more

Former Trump adviser Steve Bannon is set to attend a virtual status conference on Thursday as he faces contempt of Congress charges. CBS News legal contributor and former federal prosecutor Keir Dougall joins "CBSN AM" to break down the next steps in the cas…
Read more

US starts off strong with 3 swim medals, including...

Russia’s leading foreign trade associations denounced a new law requiring an elaborate set of regular medical examinations for sexually-transmitted diseases and drug use for all foreigners who work in the country, including their family members as young as se…
Read more