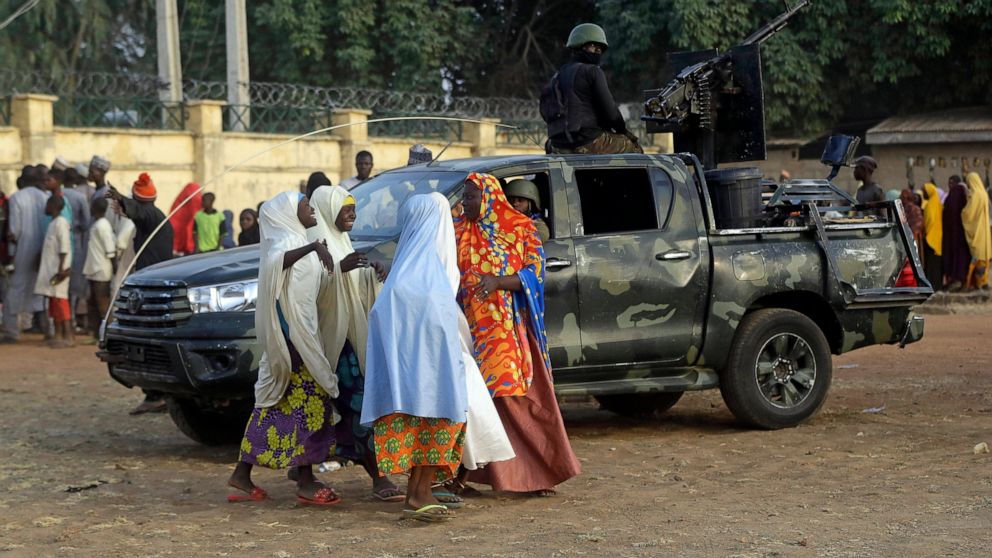 JANGEBE, Nigeria — Hundreds of Nigerian girls abducted last week from a boarding school in the countrys northwest have been returned to their families amid chaos as security forces opened fire on a gathering outside the school where the reunions were held Wednesday.

One person died and two were injured in the mayhem, according to local media reports. The forces opened fire after stones were thrown at government officials, apparently in frustration at the drawn-out procedure, said the reports.

Anxious and angry parents who were reunited with the girls after six days of waiting grabbed their daughters and left after shots rang out. Many were worried about traveling on the area’s dangerous roads at night.

The girls, aged 10 and up, had been abducted from the Government Girls Secondary School in Jangebe in Nigerias northwest Zamfara state and were released Tuesday after negotiations. Zamfara Gov. Bello Matawalle said that 279 girls had been freed.

Upon their release, the girls were brought to the government’s provincial offices, Government House, in Gusau for presentation, before being medically examined and reunited with their families.

Following the kidnappings, the Zamfara state government announced a curfew, which remains in force.

Officials said bandits were behind the abduction, referring to the groups of armed men who operate in Zamfara state and kidnap for money or to press for the release of their members from jail.

At the time of the attack, one resident told The Associated Press that the gunmen also attacked a nearby military camp and checkpoint, preventing soldiers from responding to the abductions from the school.

Nigeria has seen several such attacks and kidnappings in recent years, the most notorious in 2014, when 276 girls were abducted by the jihadist rebels of Boko Haram from the secondary school in Chibok in Borno state. More than 100 of those girls are still missing.

In December, 344 students were abducted from the Government Science Secondary School Kankara in Katsina State. They were eventually released. Huge Amazon sale: save up to 50% off Fire tablets and Fire TV Sticks

Reborn dolls are hyper-realistic dummies, treated like real children, given a birthing ceremony and even a heartbeat.
Read more

Crews continue search for missing from floods in Turkey

Who Is Zalmay Khalilzad? Biden’s Envoy for Afghanistan Resigns...

Zalmay Khalilzad was appointed Special Representative for Afghanistan Reconciliation under the administration of former President Donald Trump in 2018.
Read more

How Paris Jackson Keeps Memory of Her Father Michael...

Paris Jackson was 11 years old at the time of her father Michael Jackson's death in 2009. She sat down with Willow Smith for the "Red Table Talk" podcast and opened up about what he taught her.
Read more

Watch CM Punk's sensational return after a 7-year hiatus with an AEW All Out live stream from absolutely anywhere in the world - including for free.
Read more

Riders watched as a woman was raped on a...

A 35-year-old man in Pennsylvania is facing rape and assault charges after a woman was sexually assaulted on board a public transit train Wednesday night, authorities said on Friday.
Read more

Demonstrators, police clash amid protests over policing bill in...

Demonstrators and police clashed in Sunday protests, where thousands took to the streets in Bristol, England in opposition to a bill that would give police more powers to restrict non-violent protests.Protesters ga...
Read more

These are the unbelievable Australian PC Awards prize packs...

More than 100 protesters on Monday demonstrated at the home of a New Jersey man who was captured on video verbally attacking a neighbor with racist slurs, before reading his address and challenging the neighbor to "...
Read more

Jacksonville, Fla. (AP) -- Urban Meyer rarely, if ever, experienced anything like this at Ohio State or Florida.
Read more

At the Dawn of Life, Heat May Have Driven...

A mathematical model shows how a thermodynamic mechanism could have made protocells split in two.
Read more

The mother pulled her son from a car after he was taken from her in broad daylight in the New York City.
Read more

The first few months of 2017 saw President Donald Trump’s inauguration, the death of iconic actress Mary Tyler Moore, and an unprecedented flub at the Oscars. Look back at those moments and more in CBSN’s “2017 Unsubscribe."
Read more

A cross-party group of Glasgow politicians has set out their opposition to aspects of UK immigration policy.
Read more

In Mexico City, the ground shook for nearly a minute in some parts of the capital, but was less evident in other parts.
Read more

The hacking group posted a video message for the billionaire after he posted a cryptic tweet about Bitcoin that prompted the cryptocurrency to tumble in value.
Read more

National Border Patrol Council VP Art Del Cueto said on Friday that Vice President Kamala Harris visiting one of the least problematic areas of the southwest border is a “slap in the face” to Border Patrol agents.
Read more

With wicketkeeper Sam Billings set to make his Test debut this week, can you name the 15 others since 2000 who made their first Test appearance for England in a men's Ashes series.
Read more

The Bad Batch is getting a second season on Disney Plus, but we're hoping it does a lot to mix up the story we've come to expect from Star Wars.
Read more

House and Senate Democrats on Wednesday floated proposals on the state and local tax (SALT) deduction that take different approaches amid efforts by the lawmakers to finalize their social spending package.Both prop...
Read more

There was a familiar celebration at Old Trafford on Saturday, but not from the player you might expect.
Read more

Xiaomi’s new Redmi Note 10 smartphone is now available for purchase in India on Amazon at a starting price of Rs 11,999 with ICICI Bank offers.
Read more

Lagardere CEO: There is no conflict with Arnault –...

Arnaud Lagardere, the CEO of Lagardere (LAGA.PA), denied on Sunday that he is having a conflict with luxury goods billionaire Bernard Arnault, who recently confirmed he was effectively cu…
Read more

Democrat walks back comments suggesting R. Kelly could be...

Rep. Danny Davis (D-Ill.) is walking back comments he made this week suggesting R&B singer R. Kelly could be "welcomed back" by the city of Chicago following his conviction in a wide-ranging sex trafficking case....
Read more

The OnePlus Nord 2 is expected to launch in a few weeks time, and we've just seen our first glimpse of the phone.
Read more

Xiaomi Corp. has become the world’s second biggest smartphone maker over the past quarter following an 83% jump in shipments, according to preliminary estimates by Canalys.
Read more

Ransomware hit on major U.S. pipeline is work of...

Casey DeSantis, the wife of Florida Gov. Ron DeSantis (R), has been diagnosed with breast cancer. "I am saddened to report that Florida's esteemed First Lady and my beloved wife has ...
Read more

Fossilized footprints discovered in New Mexico indicate that early humans were walking across North America around 23,000 years ago
Read more

Q&Trey: Who Gets Hurt When Prosecutors Don’t Do Their...

On this episode, Trey breaks down who is most affected when prosecutors decide what laws they enforce and which ones they don't. Then, Trey reflects on his own experience to give advice to a future law student.
Read more

Chiara Aurelia Is The Cruel Summer Star With A...

Azeem Rafiq reacts to a message of support from...

Lawyers for Virginia Giuffre seek evidence from two people in the UK in the civil sex assault case.
Read more

London's Heathrow Airport does not expect to fully recover from the COVID-19 pandemic until 2026, with the international airport having lost $4.7 billion since the pandemic began....
Read more

Sununu sidesteps question on running for president in 2024

New Hampshire Gov. Chris Sununu (R) on Sunday sidestepped a question on any presidential ambitions in 2024, saying he is focused on his work in the Granite State.Asked by co-host Dana Bash on CNN...
Read more

The Department of Education is erasing the debts of students who were defrauded at a for-profit college.The agency ...
Read more

Some top foreign policy experts have warned that the U.S.-Russia summit may not have only been a perceived win for Russian President Vladimir Putin, but could have actually emboldened China.
Read more

Mexico's health ministry on Friday reported 2,992 new COVID-19 cases and 199 more deaths in the country, bringing the official number of infections to 3,914,706 and the death toll since the pandemic began to 296,385.
Read more

Top tips to make sure hackers aren’t spying on...

Keep your workspace safe from criminals with our guidance.
Read more

Thousands evacuated in Greece due to forest fires

Thousands of people in Greece have been evacuated since a wave of forest fires broke out last week in areas along the Mediterranean, with firefighters continuing to battle flames on Saturday.
Read more

Moscow says no Russia-U.S. progress on diplomatic missions at...

Russia-U.S. talks on Tuesday failed to make any major progress in a row over the two countries' diplomatic missions, and a further worsening of relations cannot be ruled out, Interfax news agency quoted Russia's Deputy Foreign Minister Sergei Ryabkov as sayin…
Read more

What are the best International travel destinations in North...

CBS News travel editor Peter Greenberg joins “CBS This Morning: Saturday” with some tips on how to get the foreign experience without traveling too far from home.
Read more

The program is being funded by the Bay Area Air Quality Management District and is willing to pay people up to $9,500 to trade in their vehicles.
Read more

Lisa Banes died after being hit by a scooter when crossing the road in the Upper West Side in New York City. These are some of the best TV and film roles to remember her by.
Read more

Billie Eilish released 'Lost Cause,' her latest single off her sophomore album 'Happier Than Ever.'
Read more

After bringing us some beautiful light panels, Nanoleaf is going back to the essentials.
Read more

Workers in Alabama were voting on whether to create the first unionised warehouse in the US.
Read more

Joey Jordison, the founding drummer of the band Slipknot, has died at age 46
Read more

The pass is already used widely, but port and transport workers are angry it is now mandatory.
Read more

Olympus says its EMEA systems are offline in response to a “cybersecurity incident.”
Read more

British education minister Nadhim Zahawi said on Sunday a reduction in the self-isolation period for those who test positive for COVID-19 would be helpful for those workforces hit by absences,
Read more

Gina Champion-Cain was a pillar of the local business community. But her successful image and lavish lifestyle were fueled by a fraud.
Read more

In 2019 three months before the World Cup the U.S. women’s national team announced they were suing the US soccer federation over pay inequality. Told through the voices of Megan Rapinoe, Becky Sauerbrunn and other team members the documentary ‘LFG’ follows th…
Read more

Widow of Haiti’s Assassinated Leader Vows to Find His...

Haiti’s slain President Jovenel Moise was laid to rest Friday amid pomp and security scares, as the troubled nation is wracked by violent unrest two weeks after his assassination.
Read more

The rehabilitation project is to cease following the murders of Saskia Jones and Jack Merritt.
Read more

Ryanair plane from Manchester diverted to France over smoke...

ROYAL TREATMENT FOR BIDEN — WHAT’S NEXT FOR STEANS...

The former president of the Hollywood Foreign Press Association sent an email calling Black Lives Matter a racist movement, according to a report from the ...
Read more

JPMorgan Chase CEO Jamie Dimon said that the multinational investment bank has started to prepare for a "potentially catastrophic" situation in which the United States could default on the national debt...
Read more

No one in the home was involved in the argument outside.
Read more

Canon rumored to be prepping its biggest ever launch of new RF...