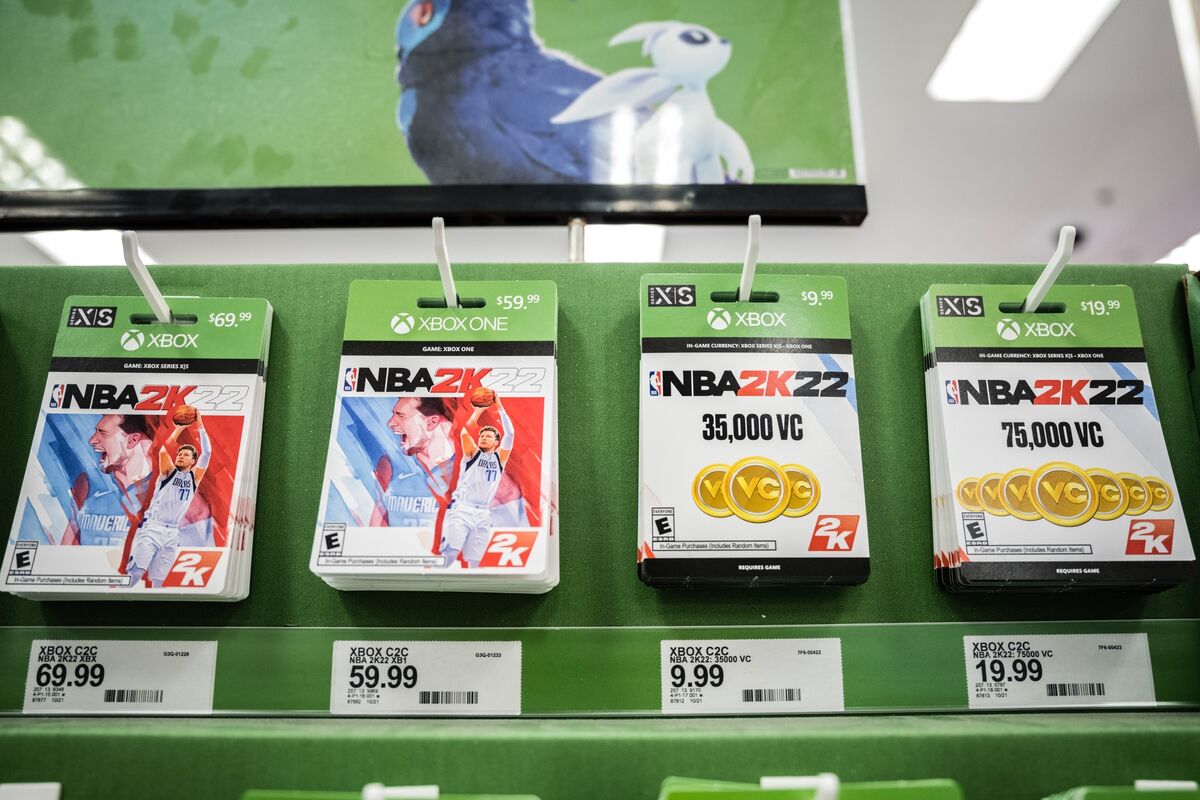 Take-Two Interactive Software Inc. is facing a class-action lawsuit over the deceptive sale of loot boxes to minors in its popular NBA 2K video game series.

One of its  recent iterations of the basketball game franchise, NBA 2K21, has sold more than

10 million copies and some 2 million people played the game daily last year, according to the companys latest annual report. The game costs $59.99 and players can spend additional money on in-game currency they use to upgrade a players clothing or receive new players.

Take-Two Interactive video game cards for Xbox consoles for sale at a store in Louisville, Kentucky, in February.

The lawsuit, filed on behalf of a minor and her guardian, contends that these loot boxes psychologically distance players from the real-life financial implications of in-game purchases and the transactions are particularly attractive to minors who may not understand the real-world implications of spending virtual currency. Whats more, the transactions are often done with a parents credit card and the minors are generally unaware that their purchase is non-refundable, according to the case.

Defendants unfair, deceptive, and unlawful practices, including illegal gambling practices, deceive, mislead, and harm consumers, the complainants said. A spokesperson for Take-Two declined to comment. An attorney for the plaintiff didnt immediately respond to a request for comment.

Loot boxes have been controversial in the gaming industry in recent years, with critics charging that the in-game purchases can amount to gambling and tempt kids into overspending. Theyve also been a huge source of revenue for the companies involved. NBA 2K21 was one of the largest contributors to Take-Twos digitally-delivered net bookings, which totaled

In 2019, a bipartisan group of U.S. senators introduced a bill that would ban loot boxes in games aimed at players under 18. Belgium also has declared them illegal. The video game industry

responded to critics by agreeing to make some disclosures about the probability that a buyer would obtain a desired item after purchasing a loot box and to improve labeling.

Alphabet Inc.s Google, were also sued over similar claims in 2020. Both suits were

The lawsuit was originally filed on Jan. 11 in Winnebago County Circuit Court, before being moved to the Illinois Northern District Court on Feb. 25. The plaintiff is seeking at least $5 million in damages.

Jan. 6 Hearings: Why So Many of Trump’s People Can’t Resist... Jan. 6 Hearings: Why So Many of Trump’s People Can’t Resist... U.S. prisons chief to retire amid criticism over COVID-19...

EXPLAINER: At 100 days, Russia-Ukraine war by the numbers

Romney planning ‘a much deeper dive’ on Jackson after...

Google Pixel Watch could get a sporty spin-off, but...

FDA Set to Halt Use of Treatments Ineffective Against...

Ukrainian circus comes to town, and stays in Italy,...

Cadillac InnerSpace concept is the two-seater autonomous EV of...

NEC’s Fahnbulleh: UK’s BoE Should Not Be Hiking Rates...

White House to be lit orange for gun violence...

Ukraine: Boris Johnson on Europe’s use of Russian energy

Amazon’s star-studded The Boys spin-off gets an outrageous new...

Some Russian oligarchs speak out, cautiously, against war

Halo Infinite co-op gameplay looks like it was worth...

With Trump off the Ballot, Can Democrats Win in...

Taking a step back: US colleges returning to online...

Covid: Wales’ mask law to end in shops and...

Cost of living: ‘I had to choose between heating...

On The Money — Push to block Russian imports hits wall

Uttar Pradesh: The right-wing brigade in pursuit of a Hindu state