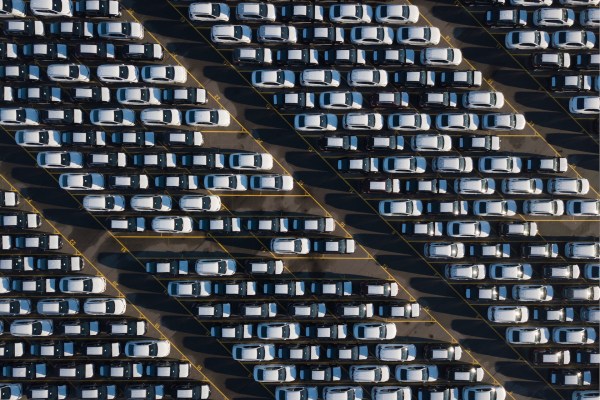 Countries around the world are tightening sanctions against Russia in response to the country’s invasion of Ukraine last week. As a result, companies are limiting, halting or fully exiting business activities in Russia, including many automakers.

A range of shipping giants and logistics companies, like MSC and Maersk, have suspended container shipping to and from Russia, resulting in automakers needing to halt production due to supply chain disruptions.

Most recently, Toyota Motor Corporation said on Wednesday it would halt production at its Russian factory starting Friday. The company has one plant in St Petersburg that manufactures RAV4 and Camry models, mainly for the Russian market.

Daimler Truck said on Monday that it would halt all of its business activities in Russia, which includes a joint venture with Russian truck maker Kamaz. The JV, which has produced 35,000 trucks for the Russian market so far, started as two separate JVs in 2009 between Mercedes-Benz Trucks Vostok and Fuso Kamaz Trucks Vostok, but those two companies merged in 2017. Now, no more trucks will be built under the partnership with Kamaz and Daimler won’t supply the truck maker with any more components, according to Reuters.

Mercedes-Benz, Daimler’s former parent company before it spun off, also said it would divest its 15% stake in Kamaz.

Swedish truck maker AB Volvo has halted all production in Russia, and Ford Motor Company said on Tuesday that it has suspended operations in Russia until further notice. Ford doesn’t have significant operations in Ukraine, aside from a joint venture with Russian automobile company Sollers, but Ford ceded the controlling interest to Sollers back in 2019.

Last week, French carmaker Renault said it would suspend some operations at its car assembly plants in Russia due to logistics bottlenecks that have caused shortages in components. The French automaker accounts for nearly 40% of Russia’s vehicle production, according to research firm IHS Markit.

Renault has not provided specifics in regards to production cuts, but the automaker has three car assembly plants in Russia. Renault’s main models built at its Moscow plant for Russian buyers are Kaptur, Duster, Nouveau Duster, Arkana and Nissan Terrano. Renault has a strategic alliance with Nissan and Mitsubishi. Renault also has a controlling stake in Russian automaker AvtoVAZ.

South Korea’s Hyundai Group makes around 230,000 cars per year at its St Petersburg facility and accounts for 27.2% of Russia’s vehicle production. The company said it would suspend its car assembly plant in St Petersburg on March 1-5 due to supply chain disruptions, but will resume operations next week, according to the Wall Street Journal. The newspaper reported that the closure is separate from Russia’s invasion of Ukraine or any economic sanctions. Russia is a big market for Hyundai, so the automaker may try not to cease operations if it can be helped.

Czech carmaker Skoda Auto, which is a part of Volkswagen, said it would limit some production at its domestic plants due to supply shortages, but its Russian operations were still running. Russia was Skoda’s second-largest market last year.

“The sales strategy in Russia and Ukraine is currently the subject of intensive discussions. Sales in both Ukraine and Russia can be expected to fall in view of recent developments,” Skoda said, noting that VW would ultimately decide if Skoda were to leave the Russian or Ukrainian markets.

Japan-based Mitsubishi Motors said on Tuesday it may suspend production in Russia. Mitsubishi has a joint venture agreement with PSA Peugeot Citroën that produces vehicles for Peugeot, Citroën and Mitsubishi in Russia at an assembly plant in Kaluga.

As part of Western sanctions against Russia, many Russian banks were shut out of the Society for Worldwide Interbank Financial Telecommunication (SWIFT), a secure messaging system that allows rapid cross-border payments. As a result, car dealers or buyers in Russia couldn’t buy foreign cars and foreign companies couldn’t sell them.

In addition to potentially pausing production in Russia, Mitsubishi said it might halt sales of its cars in the country, as well. Toyota said it would stop exporting vehicles there.

American automaker General Motors and Swedish automaker Volvo Cars said on Monday that they would suspend all vehicle exports to Russia until further notice. The Volvo Group generates about 3% of its sales from Russian buyers and has one factory in the country.

Volvo, which was the first international automaker to suspend car shipments to Russia, said in a statement that it had done so because of “potential risks associated with trading material with Russia, including the sanctions imposed by the EU and US.”

GM sells about 3,000 vehicles annually in Russia and doesn’t have any plants there.

Volkswagen‘s Russian unit temporarily suspended car deliveries to dealers until further notice, or until the sanctions imposed by the European Union and the United States are clarified.

Another German car company, BMW, has halted the export to Russia as of Tuesday and said it would stop production there due to expected supply bottlenecks.

Harley-Davidson said Tuesday that it had halted business and shipments of motorcycles to Russia, a brand that Russian President Vladimir Putin has been photographed riding. Russia isn’t a very significant market for the American bike company that has only around 10 dealerships in the country.

The geopolitical situation and automakers’ responses are constantly evolving. Check back in for updates. AP: The US ratchets up pressure on Ortega’s rule...

‘Let’s show the world what Wales are really about’

LinkedIn has a problem with fake profiles

2 police killed in clash with IS gunmen in...

For some veterans, the civilian job market is unwelcoming:...

What Is the Ideal Gas Law?

Transforming an A330 into a yacht-like luxury experience

Will Gregg Berhalter tinker with USMNT depth ahead of...

Lessons from a fintech founder: Solving for C by...

Has Russell Wilson lost his ‘superpower’ in Denver?

Pro-abortion protesters march to homes of Justices Kavanaugh and...

New plan to integrate train and bus services across...

Many security lapses led to escape of Texas inmate...

Thousands of workers have lost access to trade assistance...

Biden speaks with Tyre Nichols’ family ahead of video’s...

UK must target Putin's 'Mayfair lifestyle' with luxury goods ban, says Labour
The Morning After: Apple’s next event could mark the return of the...