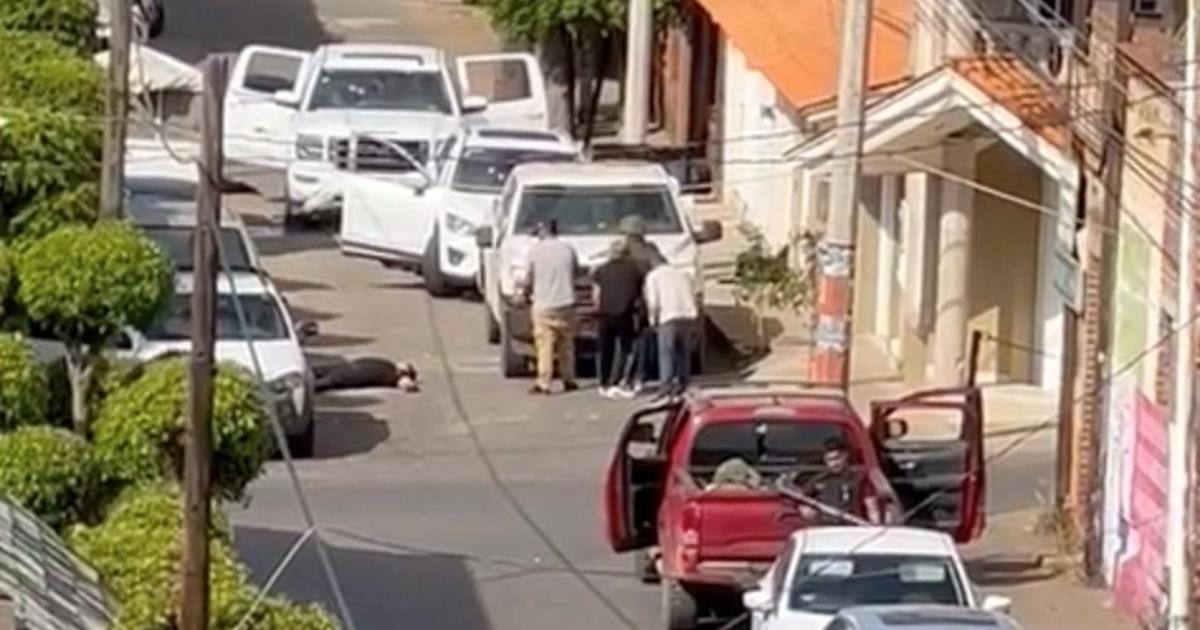 Mexican authorities said Tuesday a suspected massacre of about a dozen men seen lined up against a wall by drug cartel gunmen may have in fact just been a shootout between rival factions of the same cartel. Ricardo Mejía, the assistant secretary of public safety, said no bodies have appeared, and bullet holes where the men were standing don’t look like they were made by a firing squad.

But the scenario that Mejía described could explain why the gunmen went to such pains to erase signs of the confrontation, including power-washing blood from the street.

Both the gunmen and their victims apparently belonged to the same drug cartel, and the Jalisco cartel frowns on internal battles. The Department of Justice considers the Jalisco cartel to be “one of the five most dangerous transnational criminal organizations in the world.”

The body of a person is seen on a street while people take cover behind a vehicle, in San Jose de Gracia, Michoacan, Mexico, February 27, 2022 in this still image taken from a video posted on social media.

The men are seen lined up against a wall in a video apparently shot by a resident of the town San Jose de Gracia in the western state of Michoacan on Sunday.

Posted on social media, the video shows the men and then bursts of gunfire broke out and smoke covered the scene.

The camera cuts away, but some assumed all the men — perhaps as many as 17 — died.

But prosecutors cannot say how many died, because the attackers cleaned up the scene, washed the sidewalk and carted away any bodies. Investigators found only a bag full of brains and shell casings at the scene.

“The investigation is being carried out,” Mexican President Andrés Manuel López Obrador said Monday, according to Reuters. “But according to the report this morning, no bodies were found, but two vehicles, shell casings, parts of human beings in some bags.”

The attack Sunday occurred outside a funeral service for the mother of an alleged lieutenant for the Jalisco cartel. The man attended his mother’s funeral accompanied by his bodyguards, but apparently ran into another Jalisco cartel lieutenant with whom he had a personal quarrel.

The first man was apparently attacked and died. He and any other bodies from the confrontation were apparently carted off in pickup trucks.

But most interesting was how much time the attackers had to clean up the crime scene, because police were too afraid to approach.

Michoacan state prosecutor Adrián López Solís said the attack Sunday occurred only a few blocks from the town hall, where three local police officers were on duty. He said the police neither went to the scene nor sounded an alarm, contending that “they didn’t have sufficient force” to intervene.

López Solís said state and federal authorities learned about the attack from the social media posts, not from any alert by local police.

Local police in Mexico are often out-gunned and out-numbered by cartel gunmen.

There have been a string of recent attacks at funerals in Mexico, as cartel gunmen seek to exterminate members of rival gangs who attend the services.

In February, gunmen in the northern border city of Ciudad Juarez killed three people at a wake of a man who died in prison, and then another six at the same man’s funeral later in the day, Reuters reported.

Investigators comb the site where more than a dozen people were believed to have been gunned down by armed men on Sunday, in San Jose de Gracia, head of the municipality of Marcos Castellanos, in Michoacan state, Mexico, Feb. 28, 2022. Beyond Meat revenue drops as it cuts prices to...

‘Moms for Liberty’ mobilize for school board races —...

Timeline of Chelsea in the Roman Abramovich era –...

Foreigner: The World Still Wants To Know What Love...

Kuwait raises May crude prices to Asia to record...

Scotland’s ‘green’ ferry to run on diesel for nine...

Sonos bought a startup that made a light-powered Bluetooth...

Princess of Wales meets crew of HMS Glasgow at...

Join Captain Minnie and Goofy on a New Musical...

Tucker Carlson: Someone needs to explain why there are...

Briton dies, another severely injured in Thailand after knife...

Celebrity birthdays for the week of Nov. 20-26

Presence of Russia in North Africa is increasing, Spanish...

A small shift in Tropical Storm Ian could mean...

Terri Spath on the Markets (Radio)

White House Says No Threats to Midterms After Putin...

Former CIA officer shows what a Russian cyberattack on...