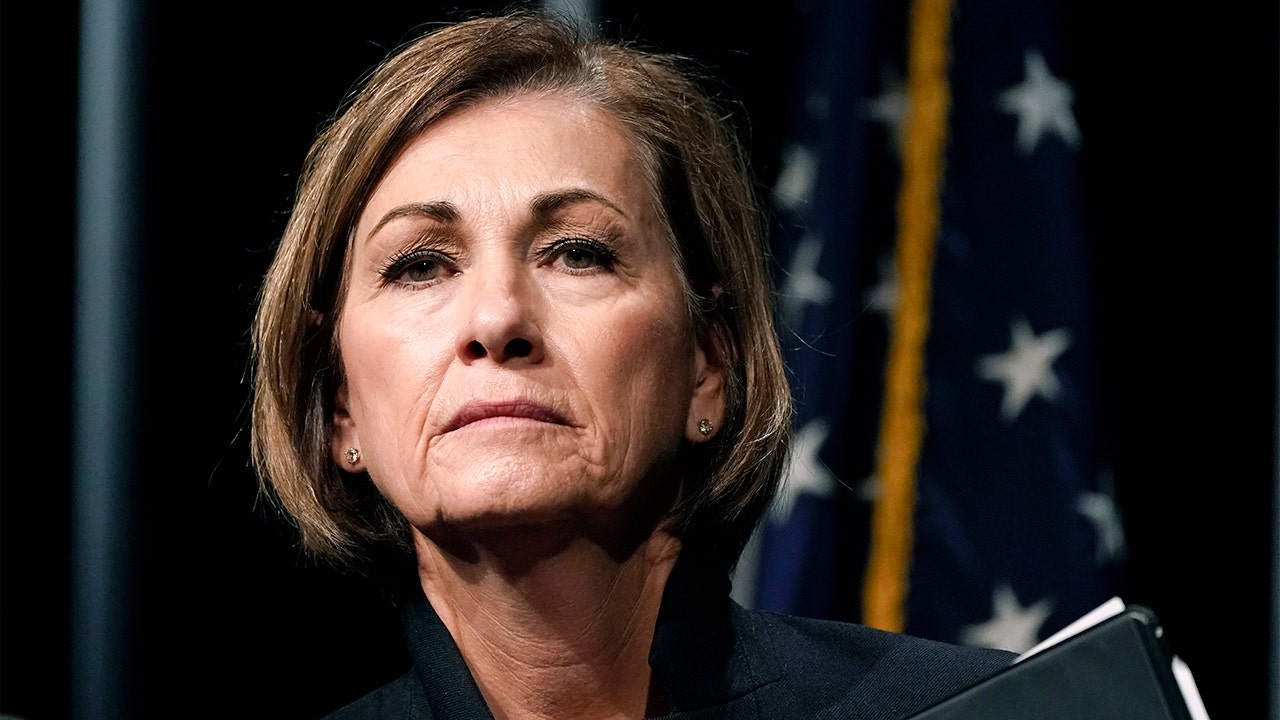 Iowa Gov. Kim Reynolds (R) took to the airwaves Tuesday night to offer a blistering response to President Biden’s State of the Union address calling him out on a number of issues which have created economic hardships for Americans, including rising inflation, a surge in crime across American cities, his response to COVID-19, and ongoing international crises.

“Instead of moving America forward, it feels like President Biden and his party have sent us back in time to the late 70s and early 80s.” Reynolds said. “When runaway inflation was hammering families, a violent crime wave was crashing on our cities, and the Soviet army was trying to redraw the world map.”

“Even before taking the oath of office, the President told us that he wanted to make America respected around the world again and to unite us here at home,” Reynolds continued. “Hes failed on both fronts.”

Iowa Gov. Kim Reynolds delivers her Condition of the State address before a joint session of the Iowa Legislature, on Jan. 11, 2022, at the Statehouse in Des Moines, Iowa.

Reynolds who has pushed back against the Biden administration on a variety of issues, notably COVID-19 mandates said the president’s “disastrous” withdrawal from Afghanistan “did more than cost American lives” as it “betrayed our allies and emboldened our enemies.”

Reynolds, noting Biden’s “too little, too late” approach to foreign policy, discussed the ongoing turmoil in Europe, calling Russia’s “full-scale” invasion into Ukraine “an attack on democracy, freedom, and the rule of law.”

“Now all Americans must stand united in solidarity with the brave people of Ukraine as they courageously defend their country against Putins tyranny,” Reynolds said, noting the importance of America’s “military readiness.”

Taking aim at Democrats, Reynolds said Biden and his party “have spent the last year either ignoring the issues facing Americans or making them worse.”

“They were warned that spending trillions would lead to soaring inflation,” she said. “They were told their anti-energy policies would send gas prices to new heights. But they plowed ahead anyway, raising the price at the pump by 50% and pushing inflation to a 40-year high.”

“When I took the oath of office five years ago, I promised Iowans that I would never lose sight of who I was working for,” Reynolds said.

“That I wouldnt become detached from the problems they were facing, from the problems I had faced myself. But you dont have to check groceries to see what high inflation does to people. You just need to step outside the D.C. Bubble. Talk to Americans about whats on their mind. Ask them: What are your concerns? What keeps you up at night?”

President Biden walks with Senate Majority Leader Chuck Schumer of N.Y., left, and House Speaker Nancy Pelosi of Calif., right, as he arrives at the U.S. Capitol on Thursday, Jan. 6, 2022, in Washington.

“Thankfully the Presidents agenda didnt pass, because even members of his own party said enough is enough,” she said. “Well, the American people share that view. Enough is enough.”

Reynolds said Americans are tired of a “political class” attempting to “remake this country into a place where an elite few tell everyone else what they can and cannot say” and what they “can and cannot believe.”

“Theyre tired of people pretending the way to end racism is by categorizing everybody by their race,” the Iowa governor added.

“Theyre tired of politicians who tell parents they should sit down, be silent, and let government control their kids education and future. Frankly, theyre tired of the theater. Where politicians do one thing when the cameras are rolling and another when they believe you cant see them.”

Highlighting hypocrisy from Democrats, Reynolds said Americans are frustrated with governors and mayors who “enforce mandates but dont follow them,” as well as elected leaders who “tell their citizens to stay home while they sneak off to Florida for sun and fun” and “demand that your child wear a mask, but they go out maskless.”

Noting a spike in crime, Reynolds said the Department of Justice “treats parents like domestic terrorists but looters and shoplifters roam free,” leaving working-class Americans to “feel like theyre the enemy.”

“This is not the same country it was a year ago,” Reynolds said. “The president tried to paint a different picture tonight, but his actions over the last twelve months dont match the rhetoric. Its not what he promised when he took office. But it doesnt have to be this way. There is an alternative.”

Wrapping up her response, Reynolds targeted the administration for its handling of the pandemic as it relates to school children and its unwillingness to “provide the resources to stop human trafficking. To stop the staggering influx of deadly drugs coming into our neighborhoods.”

“Republican governors faced the same Covid-19 virus head on,” she said. “But we honored your freedoms and saw right away that lockdowns and school closures came with their own significant costs that mandates werent the answer. And we actually listened to the science, especially with kids in masks and kids in schools. What happened and is still happening to our children over the last two years is unconscionable. Learning loss. Isolation. Anxiety. Depression. In so many states, our kids have been left behind and many will never catch up.”

“Im blessed to be the Governor of Iowa, where people are humble, hard-working, and patriotic,” Reynolds concluded. “We take care of each other. And yes, we are, as they say, Iowa Nice. But you dont have to be from Iowa to see that those are the values of America at its bestall of America.”

Since taking office last year, Biden has faced a number of crises in America and abroad. Rising inflation and other burdens placed on the American people due to the Biden administration’s handling of the pandemic have plagued the country’s economic recovery.

showed that only 31% of voters are satisfied with the direction the country is heading. Additionally, 58% of the polls respondents said that the country is worse off today than it was at the same time a year ago.

President Joe Biden delivers remarks about his Build Back Better agenda and the bipartisan infrastructure deal during a speech from the East Room of the White House in Washington, U.S., October 28, 2021.

On the economy, 24% of voters say it is in excellent or good shape, down from 29% earlier in Bidens term (April 2021). Three times as many, 76%, say economic conditions are only fair or poor.

In addition, large numbers say higher prices for groceries (77%), gas (72%), and utilities (70%) are a financial hardship for their family.  A smaller number (57%), though still a majority, call increasing housing costs a hardship. Hosepipe bans: What are water companies doing to tackle...

U.S. to Give Protected Status to Ukrainians, Halts Deportations

MVP to become champion? Leon Edwards to get UFC...

Couple Have Dream ‘Back to the Future’ Wedding After...

‘We are determined to stay in the home we...

DJI Avata launch live: all the leaks, rumors and...

Grab expects to break even in its digibank operations...

Boris Johnson: Voters are furious so PM must go,...

The squirrels ‘splooting’ all over New York City are...

Google Maps is expanding its eco-friendly navigation feature to...

After a year away, Oscar nominees celebrate together

Swing-state voters concerned about Build Back Better’s impact on...

EU Can Cut Russian Gas Imports by a Third...

Is Trudeau losing his fight against truckers?

Protesters face off outside Supreme Court after breach of...