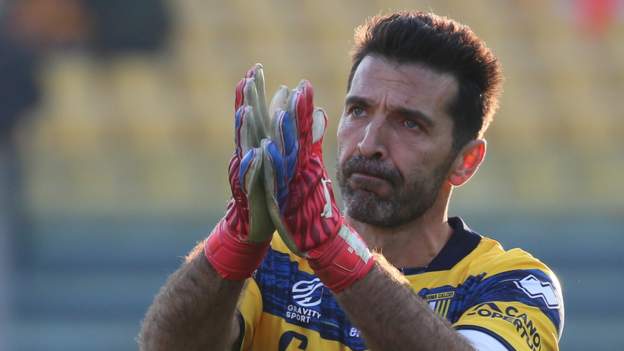 Former Italy goalkeeper Gianluigi Buffon has extended his contract with Parma until 2024, meaning he will be 46 when it expires.

The World Cup winner, 44, rejoined the Serie B club on a two-year deal last summer.

Buffon won 10 Serie A titles with Juventus and has played a record 657 games in the Italian top flight.

“For me and my family, this is a wonderful day. I hope that the city and all fans will be happy,” said Buffon.

Buffon – who made his Serie A debut for Parma in November 1995 – has played 23 league games this season for the club, who are 13th in the 20-team Serie B after 26 matches.

“My return to Parma was linked to the relationships and the deep bond I have always had with this city,” added Buffon, who announced the new deal in a news conference alongside club president Kyle Krause on Monday.

“If I hadn’t believed in what the president has in mind and in what we are doing, I would not have accepted this proposal.

“I am optimistic for the future of this club. It is a beautiful and exciting challenge for me.” Festival to host UK premiere of film made in...

Your unhelpful co-workers may not be selfish — just...

Mars colony would be new beginning as humans enter...

The increasing racial and ethnic diversity in the House...

Intel Sapphire Rapids chips confirmed to be supercharging your...

Over 700 UK Amazon workers walk out over pay...

Daniel Turner: Biden Is Trying To Get People On...

The evolution of liquidity risk management

Pakistani officials warn that swelling lake could cause more...

Depression rise at Christmas linked to stress over Covid

How Trash Goes From Garbage Cans to Landfills

Twitter is testing a way to create audio clips...

Ash Wednesday, start of Lent: When ‘world is a...

Eric Adams has a secret office

Trump’s tax returns could be released by Congress before...

Musk to seek exemption from Iran sanctions for Web...

Georgia cooperatives move to freeze nuclear costs at $8.1B