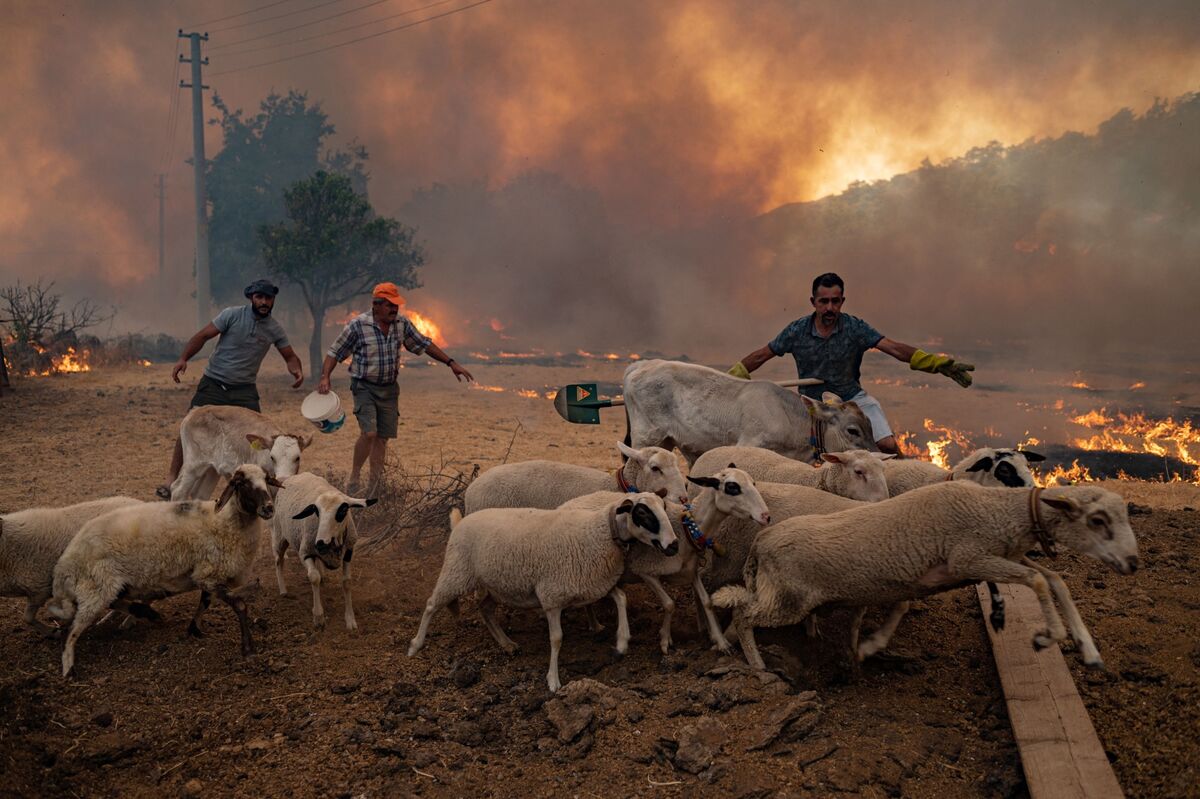 The breakneck speed of global warming exceeds the pace of efforts to protect billions of vulnerable people, according to a new report released Monday by the worlds top climate scientists. The report warns of a growing mismatch between rising temperatures and slow, fragmented efforts to adapt, leaving little time for catching up before a brief and rapidly closing window of opportunity is sealed shut.

With fact upon fact, this report reveals how people and the planet are getting clobbered by climate change, said UN Secretary-General António Guterres, calling the 3,500-page document an atlas of human suffering and an indictment of a criminal abdication of leadership. To underscore the challenges to global cooperation, Russias military invasion of Ukraine will likely overshadow the first major report in nearly eight years on climate vulnerability.

This is the second doorstop document

released in less than six months from the United Nations-backed Intergovernmental Panel on Climate Change (IPCC), with two additional reports expected before the end of the year. Researchers in the latest volume focused on the unpreparedness of nations to cope with climate instability and compounding stressors from higher temperatures, now at 1.1° Celsius above pre-industrial levels.

Among the findings in the new report:

Choices made in the next decade will determine how much hardship we can avoid. Warming beyond that level would cause unavoidable increases in multiple climate hazards, the authors write. Clawing temperatures back down after passing 1.5°C an extremely tall task  would still leave potentially irreversible damage.

Emissions have warmed the atmosphere about 1.1°C since the 19th century

A group of more than 270 scientists and 675 contributors from around the world examined every major natural and human domain, including freshwater, coasts, cities, agriculture, health, and poverty. Their consensus findings, approved in a 36-page summaryby delegates from 195 countries, assert that severe consequences of climate change are already visible across the board in unprecedented heat waves, rising sea levels, and record-breaking wildfires. They also show that strategic adaptation can save lives. A substantial change since the last version of this report, released in 2014, is that many projections about how climate change will unfold have been subsumed by observations about how it already has.

Erftstadt, in western Germany, was devastated by floods in July.

New research published over the past several years has allowed the IPCC in this report to better understand how the fundamental health of societies can impede or enhance climate adaptation. Taken together, non-climate factors like consistent laws and policies, economic conditions, finance and peoples access to basic resourcesare likely to play as critical a role in the impact of climate change as the direct effects of warming itself.

Thats because the same amount of warming will have different consequences depending on how well prepared people are to face it. What might the world look like after 2°C of warming above pre-industrial levels, the higher limit that nations agreed to in the Paris Agreement?

I say, it depends, said Brian ONeill, director of the Joint Global Change Research Institute in Maryland and a chief author of the IPCCs chapter on future risks. That question cant be answered unless you also tell me, well, what are we assuming about the condition of society?

Current national policies put the world on track for an average estimate of 2.7°C warming by 2100, according to Climate Impact Tracker. That projection goes down to 2.4°C if countries meet their official goals and even lower but still too high if pledges to zero out emissions by mid-century are met. But those climate outcomes will be shaped by the ability of leaders to implement agreements. If the world is awash in nationalism and military conflict, or racked with poverty and inequality, thats a big problem, ONeill said. And if were doing really well in all those aspects of development, then the risks are a lot lower.

A man walks across the bottom of the dried-out Porur Lake during a drought in Chennai, India, July 5, 2019.

Finance, business and trade enriched the industrialized world and continue to lift millions from poverty. But without transformation at a scale never before seen, the engines of economic growth will also drive ever-more dangerous global heating, eroding many decades of gains. The scientists are newly confident that an increase of more than 1.5°C would undercut the potential for many kinds of successful adaptation, and open up a new world of risk for every fraction of a degree beyond it.

To avoid what the IPCC terms cascading and compounding damages to human and natural systems, the world must move from sluggish, piecemeal adaptation measures to a sweeping program of anticipatory, resilient planning and development. This requires cooperation across sectors of society and at every level of governance and very quickly, before the world exceeds temperature limits. In the near term, the report stated, climate risks are more closely tied to vulnerabilities built into social systems than to what emissions trajectory the world follows.

People sheltered at cooling centers in Portland, Oregon during an unprecedented heatwave in July.

Further delays to both cutting emissions and adaptation will become increasingly costly, for physical and economic reasons.

Scientists have a word that describes what happens if nations miss their pollution limits and the world heats up past 1.5°C: overshoot. Implicit in this idea is that by using nature or technology to draw down greenhouse-gas levels, people can return the temperature back below the limit. The new IPCC report warns even if nations are able to do that a big if there will still be additional severe risks, some of which are irreversible compared to scenarios without overshoot.

This fact informs the physical limitation to climate adaptation and shapes the IPCCs guidance to reduce emissions as quickly as possible. Cuts today are much more valuable than the same cuts in five or 10 years.

It also takes less money to prevent damage than to recover from it. Patrick Verkooijen, chief executive officer of the Netherlands-based Global Center on Adaptation, estimates that Sub-Saharan Africa will require agriculture and food system adaptation that costs $15 billion a year. But damage from not adapting to worsening conditions there could run more than $200 billion a year.

Questions of injustice and inequality are prominent in the report, with particular focus on people disadvantaged by what the IPCC describes as historical and ongoing patterns of inequity such as colonialism, especially for many Indigenous Peoples and local communities.

The latest IPCC report looks at kinds of climate research that can be fuzzier than the physics-heavy first installment. Its one thing to state how much of a heat wave is attributable to climate change; the answer depends on historical weather data and atmospheric physics. Its another to estimate how many people may have died as a result of a heat wave because so many non-climatic factors that play a role: urban design, air-conditioning penetration, the health of the population.

Sea levels along the U.S. could rise about one foot by 2050, scientists have warned, with larger increases on the Gulf and East coasts, including in cities like Miami.

While humans are adapting to warmer conditions, its not happening fast enough. One big problem is lack of funding, particularly for poorer countries. Rich nations have repeatedly failed to meet their pledge of $100 billion a year in climate aid. But the report also pointed out the further challenge of putting resources into smart adaptations. The report flagged well-intentioned projects, such as sea walls meant to protect against rising oceans that may increase exposure to hazards in the long term. Irrigation meant to counteract drought manages to keep food growing while sometimes depleting precious groundwater.

Where adaptation has occurred, the report noted, projects are often either short-sighted or closer to development than deployment. The report classifies the lack of adaptation finance as a soft limit; physical roadblocks such as how fast shorelines encroach on cities or the availability of freshwater are hard limits. For instance, smallholder farmers in many regions of the world have already reached the soft limits of adaptation, meaning theyre out of available options.

Adaptation isnt happening at the pace it needs to happen, and finance is the main reason, Mukherji said. Harder limits to adaptation will grow more pronounced the longer nations wait to begin.

Controversial emergency measures, such as reflecting solar energy by seeding the upper atmosphere with chemicals, are still too poorly understood to be relied on and would not address the causes of warming, according to the scientists. That and a world of other solutions await their own comprehensive analysis when the IPCCs next group reports in just over a month.

With assistance by Akshat Rathi Yellowstone flooding takes out bridge, washes out roads and...

1Password update will stop you becoming a crypto disaster...

Biden to speak with NATO allies amid fears of...

Biden orders flags to half-staff as US records 1...

The book that sank on the Titanic and burned...

Russian Skater’s Olympics Dream Could End at Start of...

What is turnip cake and why is it a...

Russia invasion of Ukraine could play unusual role in midterms

CNN poll: Most Americans want US to do more to stop Russia,...