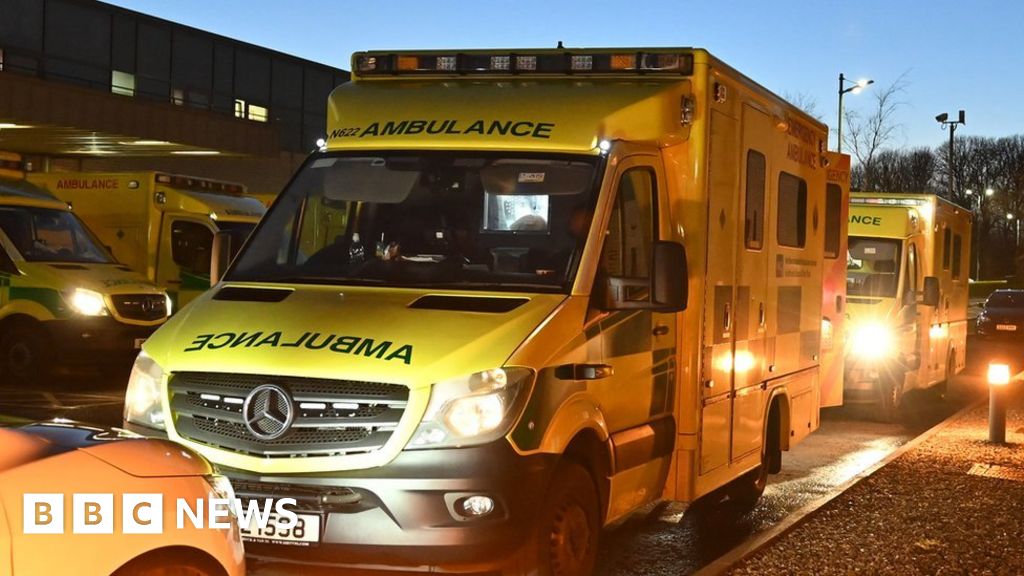 Antrim Area Hospital had no available beds when it declared a potential major incident on Tuesday.

The hospital had “two and a half wards worth” of patients in its emergency department, according to the director of operations at the Northern Trust.

The rare incident – one step from a major incident – was stood down on Tuesday evening.

Wendy Magowan said 661 out of 12,000 staff were off due to Covid or self-isolation across the Northern Trust.

As a result the trust doesn’t have the “same level of capacity we would have in a normal winter”, she told BBC Radio Ulster.

A major incident means there are too many patients for staff to deal with safely.

Ms Magowan said the move had been a last resort and Covid pressures had contributed to reduced capacity at hospitals,

She added that pressures had built at Antrim Hospital at the end of last week through to the weekend.

At one point on Tuesday there were 62 patents delayed in the emergency department, many of whom had been there more than 12 hours and some for a number of days.

Ms Magowan said the hospital’s clinical director felt that the emergency department “required support to get some space to allow patients to come in and be safely treated”.

“There literally was no room in our resus area to bring those patients in.

“There were basically two and a half wards of patients in the emergency department.

“At the time we called the potential emergency major incident there literally wasn’t one bed in the hospital.”

Ms Magowan said that more than a quarter of the hospital’s patients – 86 – have tested positive for Covid-19, though not all are being treated for Covid.

On Wednesday, the South Eastern Trust’s Andrew Dobbin said: “I think the pressures have been significant and have been going on for around a year

“We have had multiple times pinch points where it’s been a conversation {declaring a major incident].

“And we’re starting the day with 90% of our cubicle spaces filled with three wards worth of patients that have we have no capacity n the hospital to absorb.

“So it’s completely understandable that we get to points where patient safety and the ability to see and treat the sickest and offload ambulances in a timely fashion can become a crisis point,.” ‘How Are They Weapons? That’s Only a Flashlight!’

Electric vehicles have a charging access problem. These companies...

Labrador retriever mix rescued from Texas and now in...

Apple AirPods Max hit lowest ever price with this...

Former eBay exec gets 5 years in jail for...

How Gabon saved its forest elephants

Households near onshore wind turbines could get lower energy...

Cost of living: Shares jump in US and Asia...

North Korea warns of ‘fiercer military’ response to US

What will Silicon Valley learn from Holmes’ conviction?

Putin warning: What does Russian military call-up mean for...

The James Webb Space Telescope is capturing the universe...

Authorities searching for three inmates who escaped a Tennessee...

Women asked if bladder drug should be available to...

Battle for control of the Senate remains tight as...

Putin Unable to Match People to Equipment in Ukraine...

iPhone owners can finally break a sweat without an...

What Minneapolis investors are looking for (hint: it’s not...

Gold Fights Off Rising Rates, Bitcoin to Be Haven in Tough Times