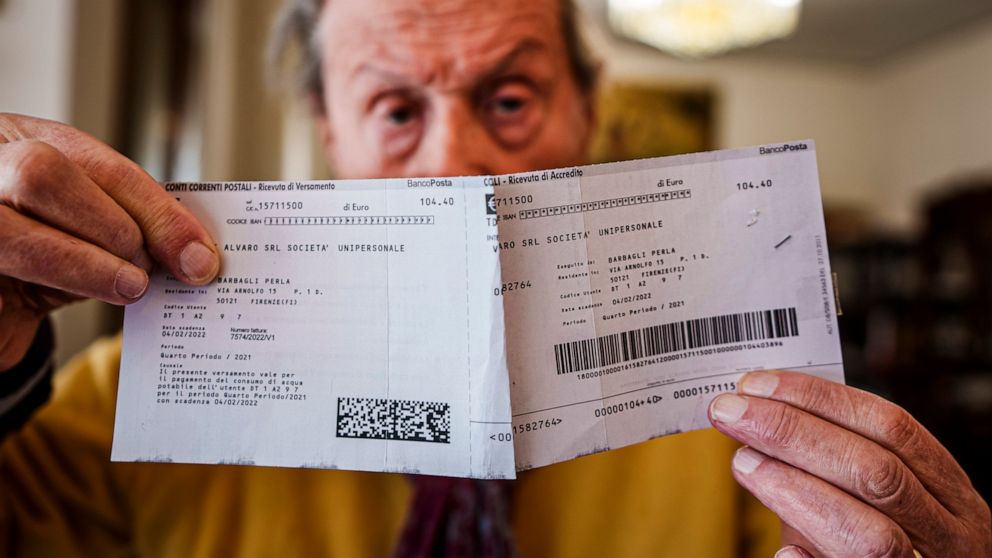 FLORENCE, Italy — Florence is famed for its contributions to Italian art, architecture and cuisine. But these days, local leaders in the city regarded as the birthplace of the Renaissance are concerned with more mundane matters: paying the bills.

Amid soaring energy costs across Europe, officials at Palazzo Vecchio the building that serves as Florences city hall as well as a museum -have teamed up with a local nonprofit to help fixed-income retirees keep their power on through an Adopt-a-Bill fundraising campaign.

Florence is a city where you live well, and for this reason, too, people live very long, Mayor Dario Nardella said.

A significant number of Florences retirees, however, live on less than 9,000 euros ($10,205) a year and can’t afford to make ends meet with an expected 55% increase in home electricity costs and a 42% hike in residential gas bills, he said.

Widower Luigi Boni, 96, confirms that. He says that by the end of February, he will have emptied his bank account and spent his monthly pension check of under 600 euros ($680) before covering utilities.

Either I eat or I pay the rent, Boni said as he sat on his sofa with a daily newspaper in his hands.

To assist him and others among Florences estimated 30,000 residents over age 65 and living alone, the city administration launched the fundraising campaign with the nonprofit Montedomini Foundation, which runs projects aimed at helping the citys retirees.

The campaign raised 33,000 euros (more than $37,000) in its first few days. Private citizens, including Florentines living abroad, made more than 200 donations, according to the citys welfare counselor, Sara Funaro.

Our goal is to raise funds to make sure that every elderly person who asks us for help can receive help to cover the increase in bills due to (energy costs) increasing, Funaro said.

Spiking energy prices are raising utility bills and driving a record rise in inflation from Poland to the United Kingdom. In response, governments across Europe are rushing to pass aid for residents and businesses as utility companies pass on costs to consumers.

In Turkey, where the economic pressure is extreme and has fueled protests, Istanbul, Ankara and Izmir are among opposition-led municipalities with similar Adopt-a-Bill initiatives. Istanbuls municipal website says nearly 49 million Turkish lira (about $3.6 million) was donated since 2020, covering 320,000 utility bills.

Italy currently imports 90% of its gas, much of it from Russia, and Draghi has insisted that any European Union sanctions to punish Russia for recognizing two separatist-controlled areas of eastern Ukraine must exempt the energy sector.

The Italian mayors association has said the governments response has so far been insufficient to help cities cope with hundreds of millions of euros in additional energy costs, making them choose between balancing budgets or cutting services.

Florence, Rome and other cities kept their municipal monuments and local government buildings dark on Feb. 10 to draw attention to the situation.

Florence’s Adopt-a-Bill campaign enjoys popular support. As well as being a top tourist destination, the capital of Italy’s Tuscany region has a long record of successfully providing social services to poor and vulnerable residents.

Its a great initiative because you can help people who cant make it to pay a bill that in a shameless way has reached unsustainable costs, said Luca Menoni, the owner of a butchers shop in Florences SantAmbrogio indoor food market.

I myself am paying a (electricity) bill double what I used to, Menoni said.

Boni may be getting some help with his energy bills to get him through the winter and stave off an expected move into a nursing home. But he still has a tight budget that doesnt allow many luxuries.

Steaks? Meat? Lets not even talk about it. I eat (cheap) packaged food, he said. After his wife died, he said, I became an expert in economic cooking.

Nicole Winfield in Rome, and Zeynep Bilginsoy, in Istanbul, contributed to this report. Lyft Plans to Shut Down Its Car-Rental Unit and...

Dusty Baker to return as Houston Astros manager in...

What we know about the deadly Halloween disaster in...

Tom Hanks says ‘Philadelphia’ wouldn’t get made today with...

Chinese rocket debris falls back to Earth over Malaysia

Weird Al gives himself the Weird Al treatment in...

Marriott’s new $600M headquarters is betting big on the...

The 2022 campaign story was set. Then Russia invaded...

Harvey Weinstein’s lawyer is worried about him surviving ‘almost...

Android will soon let you archive apps to save...

Softr’s Series A is a reminder that the no-code...

There’s a growing consensus in law enforcement over no-knock...

China’s Beijing expands COVID-19 mass testing to most of...

‘Mark and Ryan will be looking down on us’

Not Returning to the Office? Try a Desk at...

China’s Halted Climate Talks With US Are Quietly Continuing

Japan tracks eight Russian and Chinese warships near its...

Covid: Delay surgery after Omicron and support fraud's impact on taxpayers
Game studios come together to grow industry in Africa