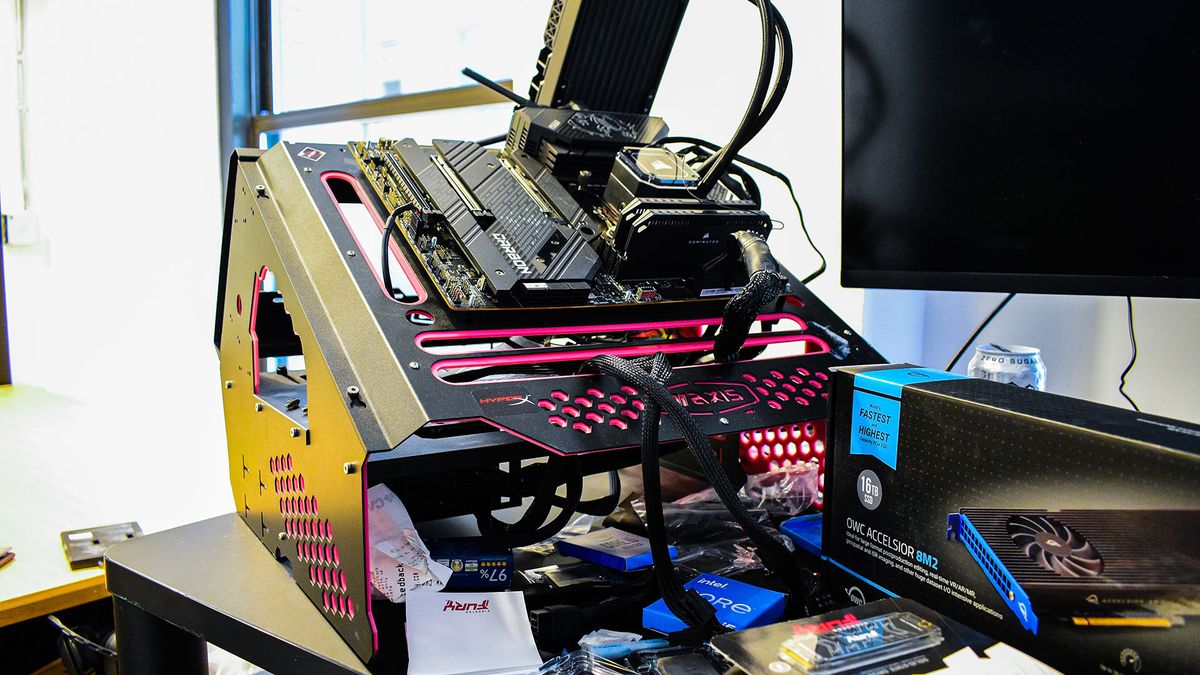 Saying goodbye to a trusted SSD isn’t as easy as you think.

When you’re constantly testing the best graphics cards, processors, you tend to find a reliable piece of equipment and rely on it heavily. For me, I like having the same test drive across all of my tests, carrying it over into every build I do. Sometimes it’s because it already has all the tests and settings I need, and other times, it’s just because I know it’s a reliable drive.

However, my main testing drive over the last three years has been the ADATA XPG SX8200 Pro, a drive that, by today’s standards, is pretty slow. And, with all the new hardware and software that’s going to be built to take advantage of it, it’s time my humble little test drive grew up a bit.

Luckily, now that every mainstream computing platform supports PCIe 4.0 SSDs, I can just upgrade to my current favorite SSD, the Samsung 980 Pro.

You could have done this earlier, Jackie

Yeah, I know, there was nothing stopping me from slotting in a PCIe 3.0 SSD before. Even motherboards that don’t support the standard would be able to read it, they just wouldn’t be able to use the higher speeds.

And I know that I could have made the change when the Intel Core i9-11900K dropped because that was when Intel SSDs started supporting PCIe 4.0 drives.

But, listen, I didn’t because that would have taken time and would have also required the presence of mind to actually do the upgrade. Two things that I usually don’t have a lot of.

I don’t want to talk about it. (Image credit: Future)

Now we can review more SSDs

One of the biggest bottlenecks we’ve faced in trying to review more SSDs to help readers like you find the best one – whether you’re a gamer looking to build a sweet gaming rig or you just want to breathe a little bit of life into an aging laptop – was the gap in speed between PCIe 4.0 and PCIe 3.0.

I’ve spent a lot of time trying to think of a solid drive to keep as a test drive in order to provide a solid baseline and to make sure that all results are comparable. The last thing I want to do is write an SSD review where I leave performance on the table because I didn’t pair it with the fastest drive I could.

But deciding on that drive is tricky because there are so many excellent drives out there. The right drive was staring at me in the face from the top of our best SSD buying guide, though.

The Samsung 980 Pro has been an excellent piece of hardware in its lifespan. It’s fast, relatively affordable for a high-end part, and even has a heatsink’d version for the PS5. Just how common it is makes me a lot more comfortable basing all my PC component reviews on it for the foreseeable future.

And now the seal is broken, and the embarrassing pile of SSDs that I’ve been putting off reviewing until I have “more time” – even though I literally never have more time – can finally be reviewed.

Who knows, though, I might need to upgrade again in a year or so when  PCIe 5.0 drives are finally a thing. I mean, 12th-generation Intel processors already support it, so hopefully, we can see some even faster drives in the near future.

The SSD isn’t the only part of the system I’m reconsidering, and in the name of trying to foster greater clarity in the life of a hardware tester, I’m making a few other changes to the main hardware I will use to test everything from a new graphics card to the best new PC games as they launch.

With the speed of the Intel Core i9-12900K, I am going to be using that as my main testing platform, instead of the AMD Ryzen 9 5900X I was using before. The Intel Core i9-12900K is just so good that it will help eliminate any and all bottlenecks. In my testing, it barely even bottlenecked the Nvidia GeForce RTX 3090 at 1080p, and I thought it would be another couple of CPU generations before we got there.

And with the move to Intel Alder Lake as my main testing platform, I will also be going with a 32GB DDR5 kit at 5,200MHz. Specifically, it’ll be Corsair Dominator. It’s mainly because that RAM was physically closest to me when I set out to switch things up, but it’s also very pretty and that helps a lot. After all, it’s something I can stare at and dissociate while I run my 50th benchmark at 9 PM while stuck in the office. “Oooh, pretty,” basically.

There will be occasions where I’ll need to use DDR4 RAM instead, but luckily I do have a DDR4-compatible Z690 board on hand to make sure that comparisons between AMD and Intel are fair. Hopefully, the next AMD Ryzen desktop processors will support DDR5, though I think it’s pretty safe to assume they will.

This isn’t actually me, sorry to disappoint. (Image credit: Acer)

My personal machine is next

While I need to keep my test bench in the office up to date, I can let my personal rig start to age a bit. I do some game testing on it from time to time, but usually without noting anything down. I’ll just play a game to find a good benchmarking loop and get a general feel for how it performs at a high resolution and high settings the night before I start testing, and save the hardcore testing for in the office.

But my rig is starting to get a little old. Well, not old old, but old enough that it would be prudent to make a few upgrades.

Over the next few months, I’d like to get this upgraded to an Intel Alder Lake chip, with DDR5 RAM and a PCIe 4.0 SSD. Until now I haven’t really felt the need, especially because I usually play games at 3,440 x 1,440, a resolution where all the work is put on the GPU, anyway. But I do keep hearing about DirectStorage, and it’s only a matter of time before having a faster SSD actually matters for gaming.

We’re definitely not there yet, but now that I’ve retired my PCIe 3.0 C:/ drive on my test bench, maybe it’s time to do the same thing at home. ‘Thanks to Hijabi riders I’ve learned to ride a...

Russian superyacht ordered to leave Fiji on US warrant

Fiona becomes a hurricane as it heads for Puerto...

Get your MacBooks now kids, Covid lockdowns are hitting...

Man charged over death of 47-year-old in Glasgow

Scientists are listening to glaciers to discover the secrets...

Google Meet really wants to stream all your videos,...

Belita Ong on the Markets (Audio)

Microsoft’s Audio Dock is a hybrid speaker and laptop...

Australia Briefing: Scott Morrison Is in Search of a...

Carolyn Hax: Mother-in-law is all social media, no action...

Rep. Jamie Raskin on the next steps for the...

MVP quarterbacks highlight ‘Under Duress’ list ahead of Week...

What Is a Fascist? | Opinion

Bringing digital transformation to the Winter Olympics with the...

NFL odds: Lines on Roquan Smith’s next team, from...

Profits From NC Casino Go to Relatives of Politicians…

US citizen imprisoned in Saudi Arabia over tweets

PlayStation’s Wrap-Up is back to break down your PS4...

Crypto gaming is growing, but can it reach people...