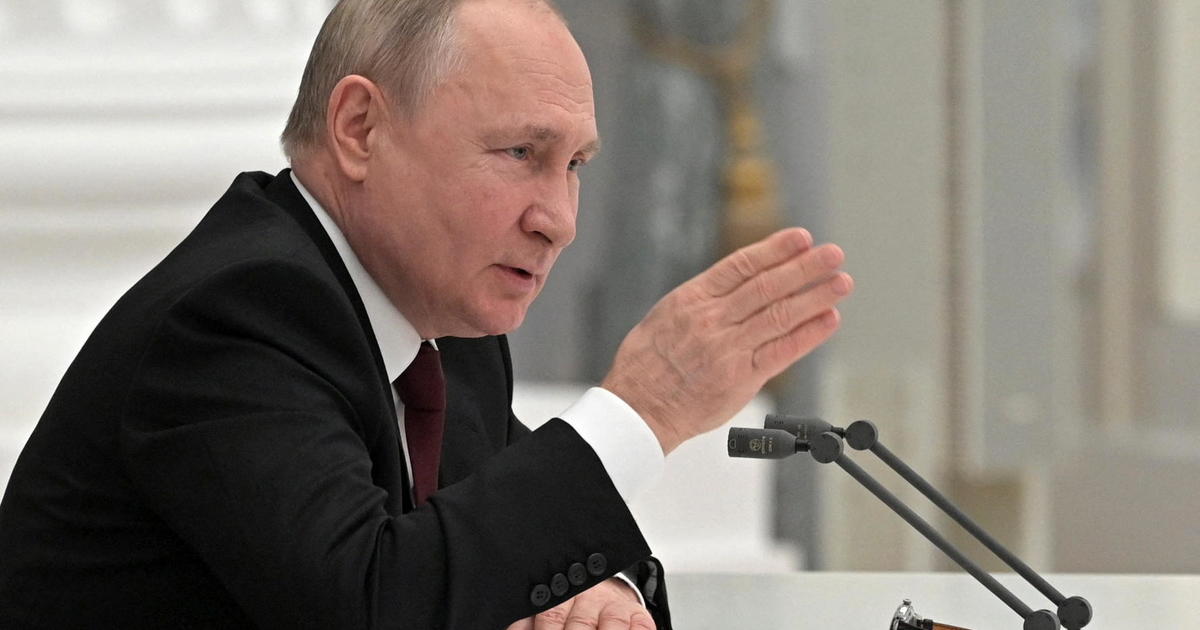 Kyiv, Ukraine — Russian President Vladimir Putin said Monday that he will recognize the independence of two Russian-backed breakaway republics in the east of Ukraine. The Biden administration warned last week that the move would violate international law and Ukraine’s sovereignty, and would “necessitate a swift and firm response” from America and its allies.

The Russian leader’s decision effectively signals that Moscow is no longer interested in negotiating with the West to find a diplomatic resolution to the Ukraine crisis based on cease-fire deals hammered out eight years ago, which have been consistently pointed to by both sides as the only viable framework for an agreement.

Putin announced during an extraordinary public meeting of his security council in Moscow earlier on Monday that he would decide whether to formally recognize the independence of the self-declared “People’s Republics” of Donetsk and Luhansk, in eastern Ukraine’s Donbas region.

During that meeting, members of the council made impassioned speeches in support of the move.

“The goal of our meeting today is to listen to our colleagues and map out our next moves in this matter, meaning both the requests by the leaders of the Donetsk People’s Republic and Luhansk People’s Republic to Russia asking to recognize their sovereignty,” Putin opened the meeting by saying.

At the end of the event, he told the council: “I have heard your opinions. The decision will be taken today.”

When the Russian parliament voted to send Putin the same request five days ago, potentially recognizing Luhansk and Donetsk as independent, it was seen as a way for the Russian leader to increase pressure on Kyiv without taking direct military action, but the West made it clear at that stage that it would be considered another serious provocation.

A map shows the Donetsk and Luhansk regions of Ukraine.

Blinken said last week that if Putin were to formally recognize Luhansk and Donetsk, that act in itself would “necessitate a swift and firm response from the United States in full coordination with our Allies and partners.”

Putin’s announcement of a decision, which he delivered in pre-recorded remarks televised on Monday evening in Russia, did not make Russia’s formal recognition of the Donetsk and Luhansk “republics” final. Russian lawmakers will now need to draft a new piece of legislation declaring the country’s recognition of the two regions, which will then go back to Putin for a signature.

But with Putin’s statement of his intent on Monday, there was little room for doubt of the outcome. The question is what he might actually do next on the ground, where he has as many as 190,000 of his troops poised to invade Ukraine — including along the border of the very regions he said Russia will soon no longer recognize as Ukrainian territory.

Russia appears to be following steps in a playbook for an invasion of Ukraine that the U.S. government not only predicted, but warned the entire world to watch for less than a week ago.

On Thursday last week, Blinken laid out the steps the U.S. believed Russia would take if Putin decided to launch a full-scale attack on Ukraine. He told the United Nations Security Council on February 17 that Russia would first stage false-flag incidents “to manufacture a pretext for its attack.”

That first stage has been well underway since late last week, according to the U.S. and its allies, with a dramatic increase in claims by Russia and the rebels in Ukraine’s eastern Donbas region of atrocities by Ukrainian forces — all of which have been firmly denied by Ukraine.

Many of the videos and photos posted online by the pro-Russian separatists as purported evidence of Ukraine’s violent acts have been discredited as poor fakes — including a video released Monday allegedly showing a man writhing in agony after his leg was severed by a Ukrainian shell. There’s no blood visible in the video, and while the screaming man is missing half a leg, the video appears to show an attachment already fitted to his upper leg to which a prosthetic limb can be attached.

Having established a false pretext, Blinken said last week, “the highest levels of the Russian Government may theatrically convene emergency meetings to address the so-called crisis.”

That fit the description of the meeting Putin convened on Monday of his National Security Council “to discuss the situation in the Donbas.” Television cameras usually show only the beginning of these meetings in Russia, but Monday’s was aired in its entirety as Putin took a hard line and made it clear that American and NATO proposals to ease the tension had failed to satisfy Russia’s demands.

Blinken also made it clear at the U.N. that a dramatic meeting of top Russian officials making bold proclamations, such as those that emerged from the National Security Council meeting on Monday, was not expected to be the final step.

U.S. has intel that Russian commanders have o…04:05

“Next, the attack is planned to begin,” Blinken said at the U.N. “Russian missiles and bombs will drop across Ukraine.  Communications will be jammed.  Cyberattacks will shut down key Ukrainian institutions. After that, Russian tanks and soldiers will advance on key targets that have already been identified and mapped out in detailed plans.  We believe these targets include Russia’s capital — Ukraine’s capital, Kyiv, a city of 2.8 million people.”

As CBS News senior national security correspondent David Martin reported on Sunday, U.S. intelligence agencies believe President Putin has already given the order to his commanders surrounding Ukraine to proceed with an invasion, and that those commanders are now making specific plans for how to maneuver on the battlefield.

CBS News’ Pamela Falk at the U.N. contributed to this report.

Tucker RealsTucker Reals is the CBSNews.com foreign editor, based at the CBS News London bureau.

The three apps I’m using to keep me cool...

Stunning Mousasi stops Vanderford in round one to retain...

Back to the Twentieth Century?

Trump lashes out at FBI amid fallout from Mar-a-Lago...

McDonald’s Says Only 1% of Shareholders Backed Icahn Board...

Learn Your Asians: Not All AAPI Are the Same...

Ukrainian bobsledder is third Olympian to test positive for...

Google Photos makes it easier to pull text from...

Rikki Neave: Mum ‘told the truth’ when she denied...

NFL: Falcons player suspended for season for betting on...

Rishi Sunak: What we know about his family’s wealth

South Africa kidnapping: ‘I survived but part of me...

Using Instagram’s time limit? Your sessions are about to...

Ukraine war: Russia must withdraw to pre-invasion position for...