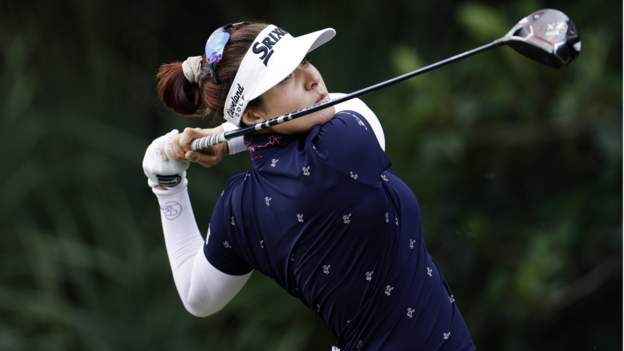 Hannah Green made history by becoming the first woman to win a mixed-gender professional golf tournament with victory at the TPS Murray River event in Australia.

The Australian world number 30 won by four strokes after carding a five-under-par final round of 66.

Green began the final round in a four-way tie for the lead with Andrew Evans, Matthew Millar and Blake Collyer.

“Very, very rarely, but I actually had one last night of me after winning.

“It was just me holding the trophy and people spraying me with champagne. And then I woke hoping it wasn’t just a dream.

“I feel amazing. I just feel so grateful that I came, it wasn’t in my plans to play here. I was going to go back to Perth. But things happen for a reason and I am really glad I made it.”

The Players Series tournaments, which were introduced in 2021, are part of the PGA Tour of Australasia, and have men and women competing in the same field.

The previous best finish by a woman was Australian Su Oh’s tie for third at TPS Victoria in 2021.

What to know ahead of South Dakota AG impeachment...

How children became a tool in Orban’s anti-LGBTQ propaganda

Powell: Supply side constraints aren’t seeing ‘a lot of...

Julia Louis-Dreyfus Curses in Front of Elmo in Hilarious...

Opinion: Many Filipinos might not recall the frightening rule...

AT&T, Verizon delay 5G debut near some airports after...

Honduras’ next president sworn in amid uncertainty

Apple warns of security flaw for iPhones, iPads and...

Man taken into custody after climbing bridge tower in...

As he heads to Saudi Arabia, Biden should look...

New details emerge about manhunt for murder suspect and...

Nasty Windows worm spreads to hundreds of networks via...

EU’s chief executive heads to Azerbaijan in search of...

Amazon is building a new data center in California

“I’m not going to give up”: Minneapolis resident opens...

The Cracks Are Showing

Black doctors say they face discrimination based on race