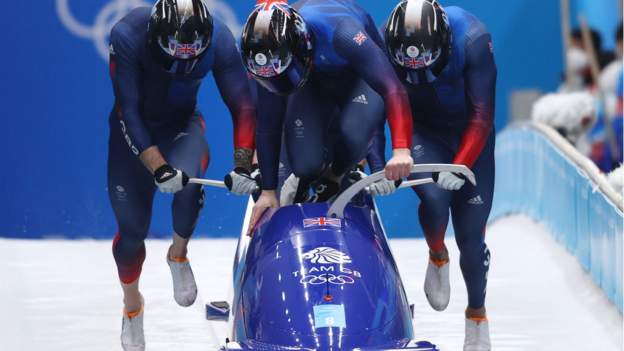 Great Britain missed out on a medal in the four-man bobsleigh with Brad Hall’s team finishing sixth at Beijing 2022.

They had sat sixth overnight after Saturday’s opening two runs but could not close the gap on the podium places.

It is a big improvement on their 17th place finish four years ago after which they had their funding cut.

That meant they had to self-fund their dream and will hope that by putting themselves into contention here they will have made the case for a re-think.

Pilot Hall, Nick Gleeson, Greg Cackett and Taylor Lawrence finished with an aggregate time over four runs of three minutes, 55.72 seconds, which was 1.42 seconds behind the winning time.

Germany won gold and silver as the country continued its dominance of the sliding events on the closing day of these Winter Olympics. German teams have won gold in all but one of the 10 sliding events.

It meant a double-double for Germany’s Francesco Friedrich, who has repeated his 2018 feat of winning the two and four-man events and becomes the first person to achieve this in successive Games.

Canada took the bronze at the Yanqing sliding centre. The challenge of tracking seals around tidal turbines

Ukraine Says Belarus-Linked Hackers May Be Behind Cyberattack

More than 40 million under threat for severe storms...

Your Evening Briefing: Traders Wait for a $2 Trillion...

Andy Murray fights back to beat Max Purcell and...

Cooper Roberts, the 8-year-old shot in Highland Park, is...

UK to open negotiations over future of Chagos Islands

Envoy: US not finished with sanctions on Myanmar military,...

Here’s what a split could mean for Tom Brady...

All Raise, a nonprofit to increase diversity in tech,...

How zoology got female animals all wrong

African health official: Ebola in Uganda is under control

The Plank in Frank Fukuyama’s Eye

Disney+ gains the Marvel series from Netflix and new...