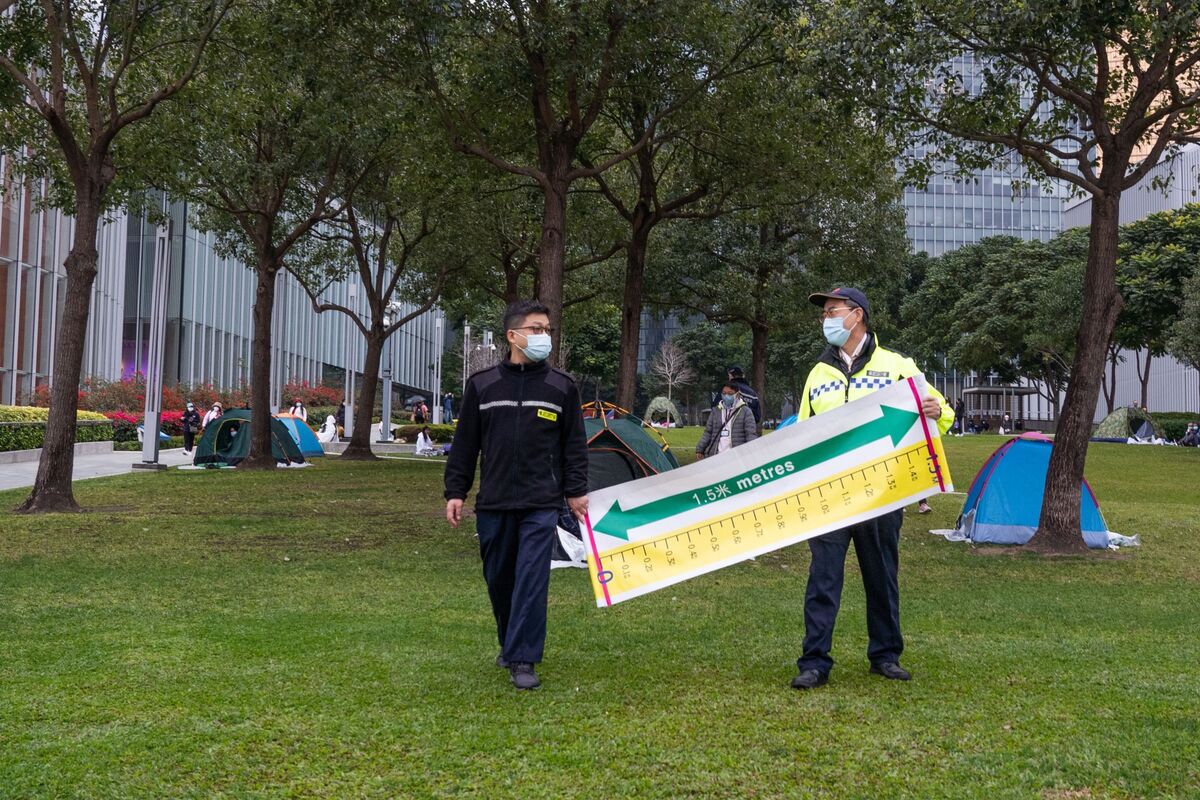 The current wave of infections, by far the most severe the city has faced during the pandemic, is testing Hong Kongs zero-tolerance approach to the virus. Scenes of elderly patients lying on gurneys in the street because hospitals have no more space and frightened residents flooding emergency rooms have shocked residents, and drawn a rare rebuke from Chinas President Xi Jinping.

We have to closely look at the situation in the next week or two to decide how to contain it,  Edwin Tsui, controller of the Centre for Health Protection, Tsui said at a

briefing on Sunday. Among measures under consideration are having police perform checks on peoples vaccination status in shopping malls and further limiting dining-in at restaurants, he said.

Last week, Xi called for Hong Kong officials to take all necessary measures in getting the citys outbreak under control, an unusually direct intervention. The Chinese president said Chief Executive Carrie Lams government should make stabilizing the Covid-19 situation its top priority, according to Chinese media. The message left the citys leaders even less room to deviate from Chinas Covid Zero policy.

Lam said last week the government plans to make it mandatory for residents to get tested for Covid, a tactic also used in mainland China to contain outbreaks.

Hong Kong recorded 6,067 new coronavirus cases Sunday, 12 of them imported. There were 14 deaths, mostly among people aged 70 or over, and 10 critical cases. Officials didnt give a number for preliminary positive cases, saying that it doesnt accurately represent a trend because of a backlog in testing and that total daily cases present a clearer picture.

Were not trying to withhold information, were just trying to show you whats useful in the case count, Tsui said.

Commercial Radio Hong Kong earlier Sunday that theres definitely no room for relaxing social-distancing measures currently in place, which include limiting the number of people allowed at gatherings and closing restaurants early.

capabilities, according to a government statement Sunday. Beijing supplied 10 million kits Saturday along with other medical supplies.

The Chinese government also commissioned a team from the mainland to build Covid isolation and treatment units. Lam attended a ceremony Saturday to mark the start of construction of facilities in Pennys Bay, the citys main quarantine camp. A total of 10,000 units will be built there and at Kai Tak Cruise Terminal.

We are under a critical situation amid this smokeless battle, Lam said. We are sincerely grateful to the central government for its assistance which is stronger and speedier than ever.

Some 20,000 more units will be provided at hotels, sports centers and newly completed public housing estates for people who test positive for Covid and have mild to no symptoms, the government said in a

Fresh food producers, set back by border-crossing disruptions due to infections among truck drivers, will receive aid from the citys relief fund, according to a government

statement Sunday. In addition to subsidies, a one-year interest-free extension on loan repayments will be granted to some fish wholesalers.

We must also try our best to bail out citizens and SMEs, stabilize everyones confidence, and deploy medium- and long-term economic development and ensuring economic and financial security, Financial Secretary Paul Chan wrote in a

blog post Sunday. Chan is due to deliver the budget on Wednesday. Here are the celebrities that supported Ukraine on the...

Archie Battersbee’s parents want to postpone the withdrawal of...

European Central Bank to join US Fed in outsized...

The latest Oculus Quest 2 update hints that its...

Amid scarce supplies, some unvaccinated patients prioritized for COVID...

McDonald’s employee in St. Louis is shot in French...

UK visas for Ukrainian refugees: ‘We don’t deserve such...

Man detained in police probe of raging wildfires in...

If you’re having issues with your iPhone 14 Pro...