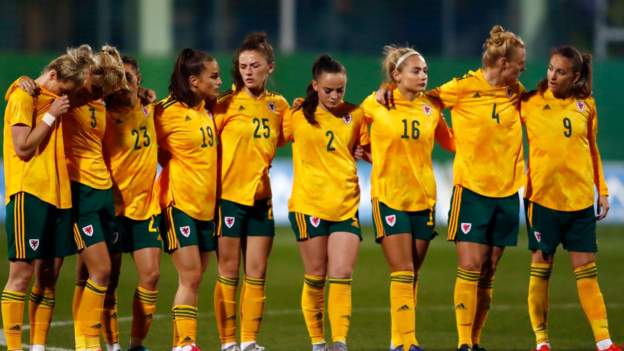 Belgium are the top side in the Pinatar Cup, ranked 20th in the world, 13 places above Wales

Wales’ hopes of lifting the Pinatar Cup were ended as they were beaten by Belgium in a penalty shoot-out.

Wales were impressive in a competitive 0-0 draw but misses by Charlie Estcourt, Lily Woodham and Angharad James saw them beaten 3-1 on penalties.

Wales can be pleased with their display at a blustery Pinatar Arena as they held the tournament’s top-ranked team.

Belgium will now play Russia in Tuesday’s final, while Wales will face Republic of Ireland who lost 1-0 to Russia in the other semi-final.

Wales boss Gemma Grainger opted to rotate her squad, despite Belgium being tough opponents, as she keeps her focus primarily on Wales’ World Cup qualifying campaign.

Goalkeeper Olivia Clark came into the side for just her third cap, while Estcourt and Woodham were drafted into a new-look Wales defence.

Orlando Pride midfielder James was also a starter after arriving to the camp late, meaning she was a substitute as Wales beat holders Scotland 3-1 in their opening match, while Carrie Jones was given a chance to impress as an attacking midfielder.

It was Wales who fashioned the first chance of the contest as Jess Fishlock – who scored twice against Scotland – saw her effort fly just over the crossbar.

Belgium created very little in the first half with Wales defending resolutely and only Marie Minnaert’s miss from close range caused them a scare.

Wales ended the half on the front foot with Fishlock’s shot from distance saved by Diede Lemey at the second attempt.

Grainger made two further changes at half-time with Gemma Evans and Ffion Morgan introduced and Morgan’s first contribution was a fine cross that Kayleigh Green headed at Lemey.

Belgium did not fully test 20-year old goalkeeper Clark until the hour mark when James uncharacteristically gave the ball away and Wijnants shot powerfully at goal, with Clark tipping the ball away at full stretch.

Clark also averted a dangerous corner with the wind swirling, while Rhiannon Roberts did well to block Minnaert’s shot.

The wind made defending set-pieces extremely difficult and Green might have done better with a header from a corner on 65 minutes, but she could not keep her effort on target, while at the other end Wijnants fired wide in a crowded penalty area.

Wijnants was a constant threat and her cross struck the base of the post with Clark beaten as Belgium sent on several of their more established players in search of a winning goal.

Manchester United’s Chloe Williams was given her debut and she was involved in a flowing move that culminated in a perfect cross from Woodham, but substitute Wynne shot just wide as she stretched to turn the ball home with six minutes remaining.

Wales made an ideal start as Green scored and Minnaert struck the post, but Wales missed their next three kicks and can now only finish third. Tiger-Backed Flutterwave Triples in Value to Over $3 Billion...

Everything That Happened as Alex Jones Faced Sandy Hook...

Ben Stokes ‘better than I ever thought’ as Test...

State media: No survivors found in crash of Chinese...

Revisiting a Conversation with Os Guinness: America’s Identity of...

How the Federal Reserve’s rate hikes affect your finances

Band of others: Ukraine’s legions of foreign soldiers are...

Kim Cattrall has moved on from ‘Sex and the...

Mattress pad vs mattress topper: which one is best...

Why Is Sri Lanka in Crisis?

No Ukraine War if Biden Had Supplied Weapons Sooner,...

The Power and Pitfalls of AI for US Intelligence

Is Nato’s Nordic expansion a threat or boost to...

Asia’s richest woman lost more than half her fortune...

Kyiv mayor says he is worried he is a...

Colombia rescuers ‘wont give up’ search for miners after...