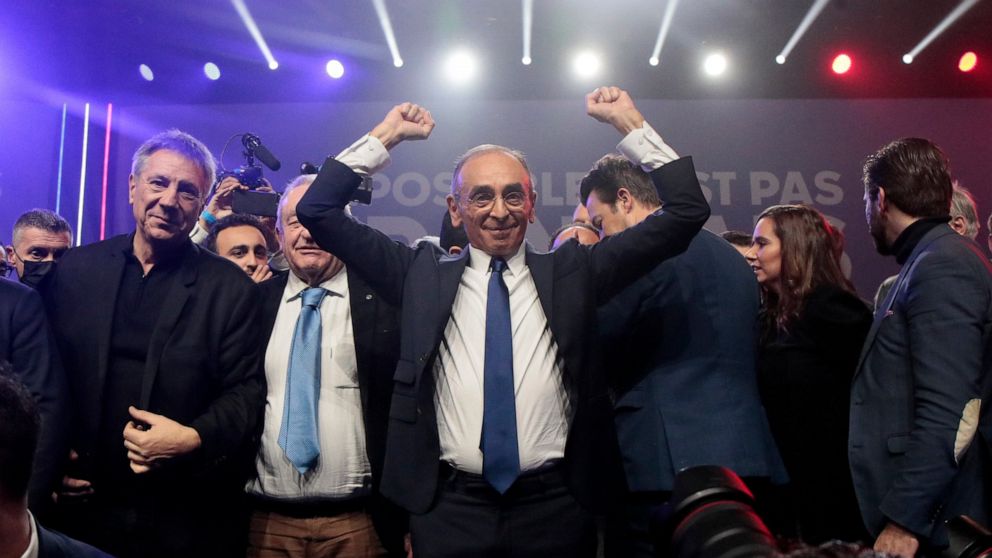 PARIS — Two words, taboo for many in France because they evoke a conspiracy theory embraced by white supremacists, have been haunting the French presidential campaign.

Great replacement rolls off the tongue of presidential candidate Eric Zemmour, an outsider with views to the right of the far-right who has made the term the underpinning of his campaign. But when mainstream conservative presidential candidate Valerie Pecresse pronounced them at her first major rally last weekend, politicians and pundits screamed foul, saying she had crossed a red line.

The great replacement is the false claim that the native populations of France and other Western countries are being overrun by non-white immigrants notably Muslims who are allegedly supplanting, and one day will erase, Christian civilization and its values. The claim, popularized by a French author, has inspired deadly attacks in recent years from New Zealand to El Paso, Texas.

Critics said Pecresse was normalizing a dangerous falsehood that immigration figures in France do not corroborate.

Pecresse later denied she was venturing into Zemmours far-right territory, contending that her brief remark was misconstrued. Still, the flap focused attention on Zemmours campaign mantra and underscored the threat he represents to mainstream conservatives.

If Im a candidate in the presidential election, it is firstly and above all to stop the great replacement and to fight immigration, Zemmour whose upstart party is named Reconquest told France 2 TV.

Numerous polls place Zemmour fourth among a bevy of candidates for France’s April 10 presidential vote behind poll leader President Emmanuel Macron who has yet to formally declare his candidacy and slightly behind far-right candidate Marine Le Pen and Pecresse. A presidential runoff will be held among the top two candidates on April 24 if no one wins outright.

The great replacement theory was formulated in 2011 by Renaud Camus, a writer and social media fan. But the notion dates back to writers of the late 19th and early 20th centuries, according to Jean-Yves Camus, a French expert on the far right who is not related to Renaud.

Both Renaud Camus and Zemmour base their unfounded claims that Muslims are already supplanting native French on visual indicators like Islamic headscarves. Yet less than 10% of Frances population is Muslim.

Every day when I go to work, I say, Hey, this is France, said Jean-Yves Camus, the far-right expert. When Zemmour goes out from his flat … he says, Wow, this is not France anymore.

Polls suggest that between Le Pen and Zemmour, the far-right has gained traction in France since the 2017 presidential race, when the centrist Macron beat Le Pen in a landslide in the presidential runoff. Together, the two far-right candidates represent 30% of potential French voters, the polls show, compared to up to 25% for Macron.

One reason for the ground gained by far-right ideology is Frances difficulty adjusting to a multicultural society, Jean-Yves Camus said.

In France, where the melting pot is based on assimilation and officials are banned from counting people by origin, we are supposed to be equal but only if we are identical,” he said.

There is certainly some kind of mainstreaming of many issues that were only fringe topics, lets say 10 or 15 years ago, Jean-Yves Camus said. Its not only about the great replacement … (it’s) anything that has to do with immigration, and French identity, and the roots of the French nation.

He also cites an amorphous fear of Muslims, viewed by some as the enemy from within, due to several terrorist attacks carried out by French Muslim citizens. That is devastating for the nations Muslim population, estimated at 5 million, which is overwhelmingly peaceful but often unfairly stigmatized.

The rector of the Paris mosque urged Muslim citizens to vote, asking them to sanction the apostles of racism and those who look down on French of the Muslim faith.

Without naming names, rector Chems-Eddine Hafiz denounced the far-right in a commentary in the Le Monde newspaper, saying their extremist speech must be disavowed just like Islamist extremists.

Le Pen, once best known for her anti-immigration portrayals of a France with minarets dotting the countryside where church steeples once stood, has softened her image to broaden her voter base. She has not pronounced the taboo words that are Zemmours mantra. Several figures in her far-right National Rally party have complained, saying that Le Pen has gone off message, and have defected to Zemmours camp.

Zemmours latest far-right achievement was a phone conversation Monday evening with former U.S. President Donald Trump. Zemmour, who reportedly requested the chat, told reporters the two discussed the destiny and perspectives of the United States and France, which he claimed are both in the torment of a war of civilizations.

Le Pen was philosophical. She had hoped, but failed, to meet with Trump during her 2017 campaign.

I hope that Donald Trump is doing well, she told reporters in Villers-Cotterets, where she was promoting the French language against an Anglo-Saxon invasion. ‘Worst Over’ Call for China Tech Booms on Ant...

How the Courts Have Gotten Abortion Wrong for Decades...

How Apple could make the AirPods Pro 2 perfect...

China export growth rebounds to 17% over a year...

8M Yemenis at risk of losing aid in March,...

Why is it so risky to fly in Nepal?

How Meghan Markle Could Use Grace Kelly as a...

NYC pediatrician shares wise ways to get through today’s...

Yellen to push price cap on Russian oil during...

Sandi Braga on the Markets (Radio)

Apple’s latest Fitness Plus update turns your watch into...

Some of the most important Microsoft Teams features are...

Birmingham explosion: Drone captures aftermath of house from above

Months after pledge, India yet to submit emissions targets

China’s Renewable Energy Fleet Is Growing Too Fast for...