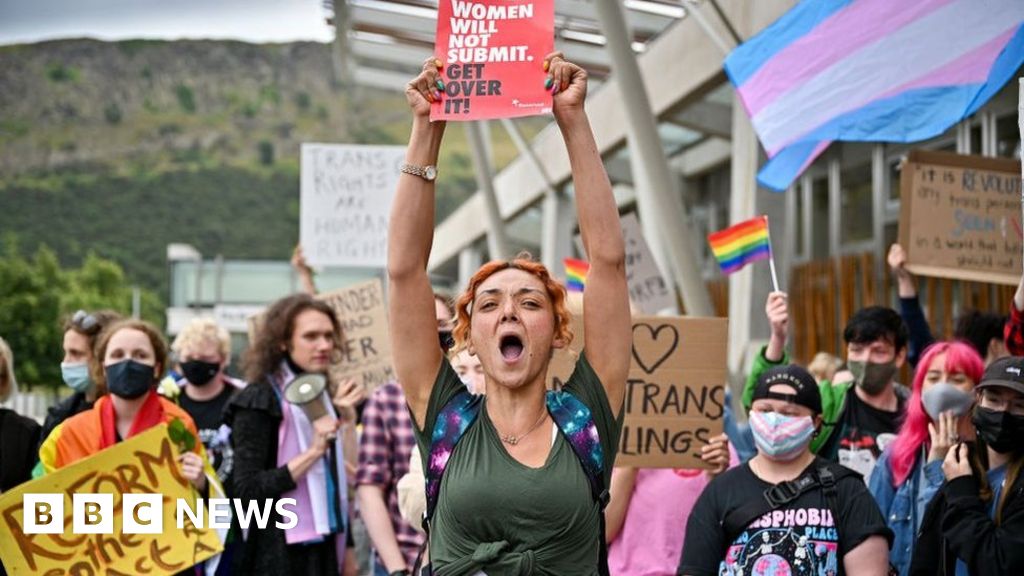 Media caption, What reforms are being proposed and why have they proved so controversial?

The Scottish government has committed to make it easier for trans people to have their gender legally recognised.

It has been a hotly-contested issued, with critics voicing concerns about the potential implications for women of allowing people to self-identify their gender.

A survey conducted for the BBC suggests a general sympathy towards trans people accompanied by uncertainty and hesitation around the details of the changes.

On almost all the questions there was a clear age divide, with the under 35s much more inclined to take a position more sympathetic to reform.

Image caption, Alex says the majority of the conversations in the debate happen without trans people being present

“For me, gender is a spectrum and I feel mainly close to the masculine end and I’ve never, ever identified as female.”

The 27-year-old came out as transgender about five years ago and, after attending a gender clinic in Glasgow, has been treated with hormones for three and a half years. Four months ago he had “top surgery”.

He says: “Now, I actually know what it’s like to be happy. I don’t think I was ever happy before. I feel comfortable. I feel good about myself.”

Alex does not have a gender recognition certificate, the document that shows that a person has satisfied the criteria for legal recognition in the acquired gender.

He says the process is expensive, lengthy, bureaucratic and “relies on other people to decide who you are”.

But he has been gathering evidence of all the landmarks on his journey for if he does apply.

For Alex, the majority of the conversations in the debate happen without trans people being present.

“You can’t understand somebody’s situation until you speak to them or you live in their shoes,” he says.

He says that the majority of the public are not too concerned about the issue.

“I think there’s just a select few who care too much and look into it too much, and it doesn’t affect them in any possible way,” he says.

On every question asked in the survey support for transgender rights was higher among younger people.

People aged 16 to 34 were more likely than older people to support making it easier to acquire a gender recognition certificate and also backed allowing people to legally identify as non-binary.

In addition to the generation split, there was also a marked tendency for women to be more supportive than men.

The transgender debate has been raging for a while, with strong opinions on both sides, but the survey suggests that most people (67%) have not been following it closely.

About half the people surveyed accepted the definition that a transgender person is someone who identifies as a different gender from the sex they were registered at birth.

One in five felt that someone had to have gender reassignment surgery to be transgender, a much narrower definition.

The Gender Recognition Act Reform bill is expected to come before the Scottish Parliament early next month.

The poll indicated a majority of people (57%) would support making the process to acquire a gender recognition certificate easier but that support dropped when asked specific proposals.

One of the proposed changes would mean people no longer would have to obtain a medical diagnosis of gender dysphoria, which is defined by the NHS as a “mismatch” between biological sex (whether they were born physically male or female) and their gender identity (the way in which they see and describe themselves).

In all, 40% supported allowing transgender people to self-identify just slightly ahead of the 38% who opposed.

Another proposal was reducing the time someone had to have been living in their acquired gender from two years tor three months, with a further three-month “reflection period”. More people opposed this than supported it.

Reducing the minimum age a person can apply for legal gender recognition from 18 to 16 was opposed by a majority of people.

An intense debate has questioned whether gender self-identification could affect women-only spaces such as toilets, changing rooms and domestic violence refuges.

The survey suggested that females were less concerned than males on the issue.

Women, in general, are divided on whether transgender women, who were registered male at birth, should be able to use women’s public toilets but they are more likely to be in favour than men. A lot of people did not give an opinion.

A third (35%) said they should be able to do so only if they have legally changed sex and had gender reassignment surgery.

And 28% said that transgender people should be able to access single sex spaces even if they had not had gender reassignment surgery.

On the issue of prisons, there were slightly more people in favour of transgender women being housed in women’s prisons (33% v 27%) but there were a lot of people who did not know. One in five neither agree nor disagree (21%), while a further one in five say they don’t know (18%).

In sport, there seemed to be divide between leisure-based activities and elite level athletes, with people not supporting transgender people taking part in professional sport under their acquired gender (23% support, 44% against)

When it comes to children, most people surveyed appear to be against allowing a transgender person aged under 16 to access to hormone blocking medication which can delay the onset of puberty (29% support – 41% oppose). Other medical interventions suggested even lower support.

In a school setting, the people surveyed mostly thought a transgender person aged under 16 should not be allowed to live as the gender they identify with at school without their parents’ consent. (43% disagree, 28% agree).

Again males and older people are much more likely than females to think this.

Image caption, Campaigners from both sides of the issue have rallied outside the Scottish Parliament

There are two obvious points about our attitude as a society on transgender men and women.

The first is that we are pretty evenly divided on many of the arguments we are having such as whether to make it easier for trans people to register legally their gender. And whether or not they should be able to use toilets of the gender to which they identify.

The second is that quite a lot of us are still not really very sure about where we stand on this issue.

On many of the questions in this poll we have got between a fifth and a third of people saying they are frankly not sure, don’t know, neither agree nor disagree with either option.

In contrast to the online debate, which is undoubtedly deeply polarised, the general public are not particularly sure and only about a third are following the issue closely. Should You Carry Your Dog in a Backpack? Yes

Wife Defended for Calling Out Husband Over Missed Anniversary:...

LG OLED TVs are about to get a huge...

PewDiePie faces backlash for appearing to mock a deaf...

Boxing’s Olympic future is in doubt with Russian to...

Woman Who Helped at High School Indicted for Allegedly...

The Papers: Gove backs Sunak and Fergie called as...

Measures to stem spread of omicron in UK dropped

5 ways tech can help you feel safer at...

Repair work begins in some Alaska towns slammed by...

Zelenskyy vows to fight Russian takeover of Donbas: ‘We...

New Zealand 12-23 Ireland: Irish ‘back themselves against anyone’...

German court to rule in row over funding for...

Interest Rates And Inflation In 2022 (Podcast)

What are Scotland’s gender recognition reforms?