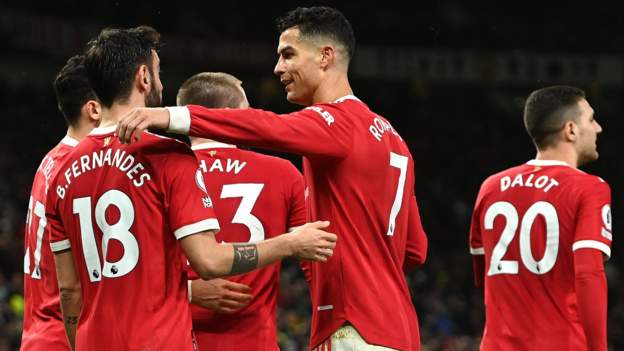 It wasn’t just the cheers of relief – as Bruno Fernandes’ match-sealing second goal hit the net – that gave the game away.

The normally studious Ralf Rangnick had done so a couple of minutes earlier as Brighton pushed determinedly at the United goal looking for an injury-time equaliser.

As Graham Potter waved his arms to tell his team to go forward, Rangnick was equally decisive in telling his to go back.

After three successive games in which his side had held a lead, then lost it, the German did not want it happening again.

Following Cristiano Ronaldo’s sensational opener, at home, and to opponents reduced to 10 men with over half an hour remaining following Brighton captain Lewis Dunk’s red card, it was unthinkable.

“Big,” said Rangnick, when asked about both the importance of the victory and maintaining a place in the top four, which United have moved into again as a result of their 2-0 win.

“We still have quite a few games to play but this was a very important win for us.”

An imbalance in the number of fixtures United have played, compared to Arsenal, Wolves and Tottenham, means their present position is not remotely secure.

But they have given their rivals something to chase and, as they approach next month’s potentially pivotal games against Manchester City, Tottenham and Liverpool, they have hope.

Given the enormity of the prize, that is something at least.

How much is at stake?

So far this season, United have earned 35.5m (£29.8m) in prize money from the Champions League.

Had they achieved the same performance levels and results in reaching the last 16 of the Europa League, the figure would have been 8.74m (£7.33m) and in the Europa Conference League it would be 6.32m (£5.3m).

There is additional income to be added in from the TV pool, but the gap in revenue is clear – and these gaps are not quite as insignificant as they were in the immediate aftermath of Sir Alex Ferguson’s retirement in 2013.

For the first time, United have fallen behind Manchester City in overall revenue. The situation will change next year when matchday revenue will rise to more normal levels, but a near 90m (£75.5m) gap underlines how successful on the pitch the blue half of the city has been compared to the red.

And, while they clearly have their own issues to deal with, Tottenham have the capacity to generate higher matchday revenue in their new stadium than United have at Old Trafford, which is presently being assessed for a pretty expensive upgrade.

Fans will argue just how much of a blow this is but, clearly, any chance United have of keeping Paul Pogba, whose contract expires in the summer, will almost certainly disappear if Champions League football is not secured for next season.

The same can also be said of Ronaldo, who is by no means certain to remain at United for the final year of his contract anyway.

And then there is the managerial situation.

It is fair to say both leading contenders to replace Ole Gunnar Solskjaer are at home in Europe’s elite competition.

Erik ten Hag has been involved in the Champions League in all four full seasons he has spent as Ajax boss, while Mauricio Pochettino had four Champions League campaigns in five spells in Europe with Tottenham.

Last season the Argentine reached the semi-final with Paris St-Germain and just won the first leg of a mouth-watering last-16 clash with Real Madrid.

Luis Enrique’s name has also been linked with the vacancy even if he has a prior engagement at the World Cup with Spain in November and December. His Champions League history exceeds that of Ten Hag and Pochettino, given he was the last man to win it as Barcelona coach in 2015.

Arsene Wenger was often ridiculed by United supporters when the former Arsenal manager used to describe Champions League qualification as a ‘trophy’.

It was a theme taken on by Pochettino during his time at Tottenham too.

The theory was that only clubs who don’t actually compete for the major prizes talk in such terms.

On the night Premier League leaders Manchester City scored five away from home at Sporting Lisbon to underline their status as favourites for the Champions League, this is what United are reduced to now.

“Right now, this is exactly what Manchester United needs and wants, to finish fourth in the league,” said Rangnick, ahead of the game. “This is the highest possible achievement we can get.”

He was speaking honestly, having now won seven of his 14 games as interim manager.

Other than Ronaldo, keeper David de Gea is the only member of the United side who knows what it feels like to win one of the biggest prizes – Champions League or Premier League – as a player at Old Trafford.

He knows more than fourth place is expected and demanded by the club’s vast following.

“We should be fighting for more things than the top four, but that is the reality,” said De Gea.

“There are many teams fighting for the same position and, with the quality we have, we should win a lot of points.” A Puritan Politics: Life, Unity, and the Pursuit of...

Is polio circulating in the U.S.? The CDC will...

‘Final Fantasy XIV’ will go back on sale on...

Russian Ambassador to Poland Hit With Red Paint in...

Analysis: Biden’s document scandal eats away at efforts to...

Pivoting your startup in a bear market: Become undeniably...

Sergio Garcia to ‘hold off’ on quitting DP World...

Bloomberg Westminster: Made in Britain

Biden nixes Trump design for Air Force One over...

Dolly Parton and James Patterson team up for a...

Police searching for mother who abducted her 2 young...

How quickly do enterprise tech firms need to grow...

Dolphins seen in Bronx River for first time in...

Night Tube services to return to Jubilee line in...

This week in travel: Mask mandates and tourist tax

UK-based Playter closes $55M round for its BNPL platform...

Debunking the myths of why venture investors don’t fund...

Serena Loses to Tomljanovic At US Open; Could Be...

Why startups may want to rent hardware instead of buying it –...